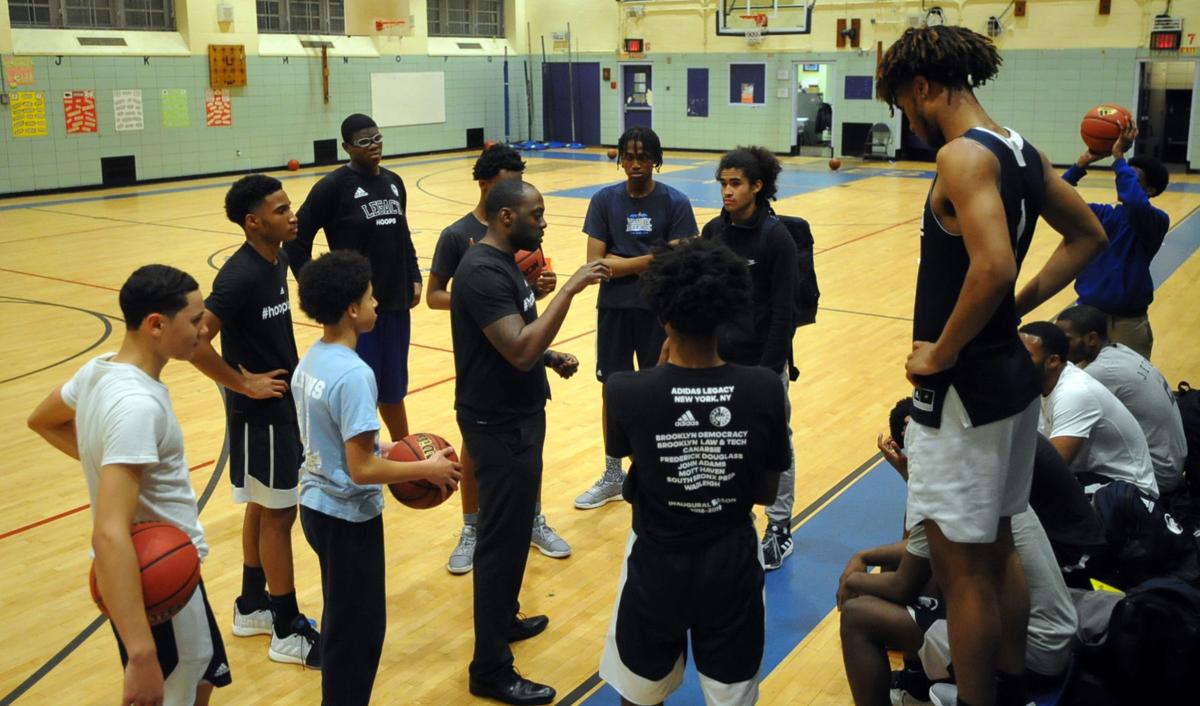 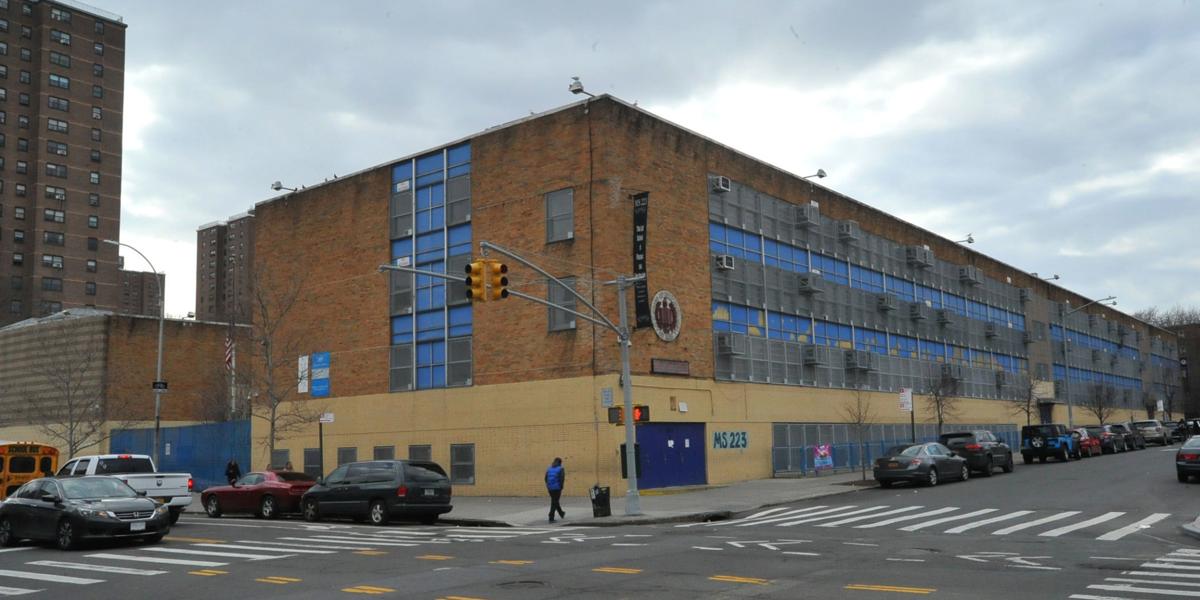 South Bronx Prep, in the Mott Haven section of the South Bronx. 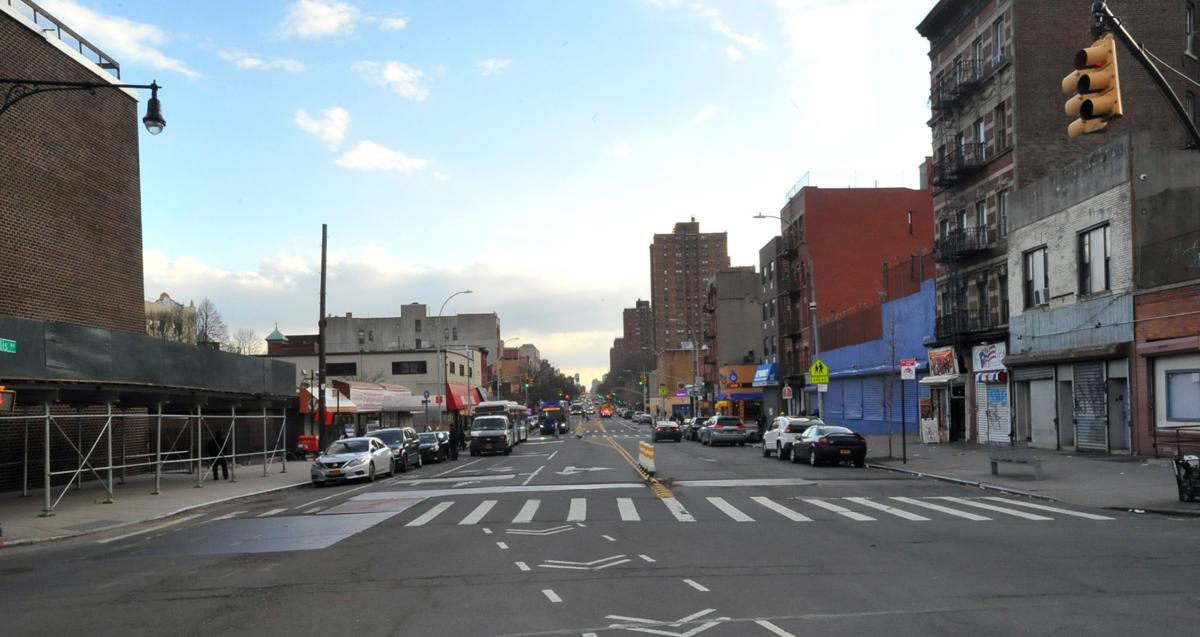 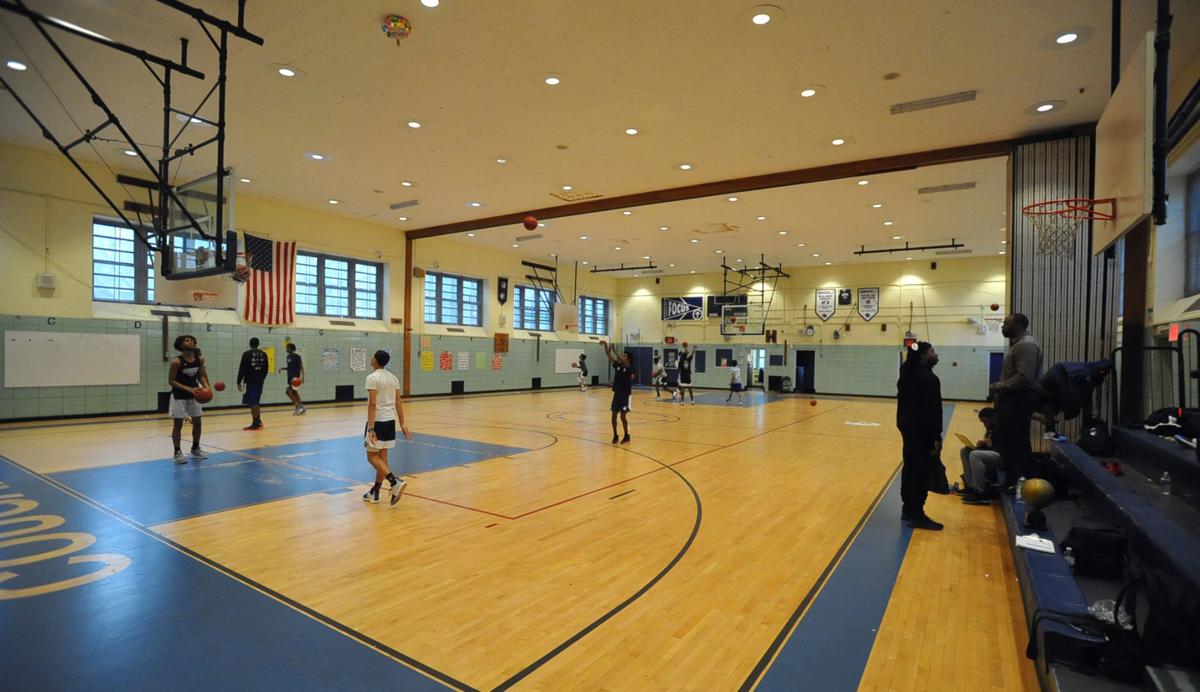 The South Bronx Prep team practices in their gym. 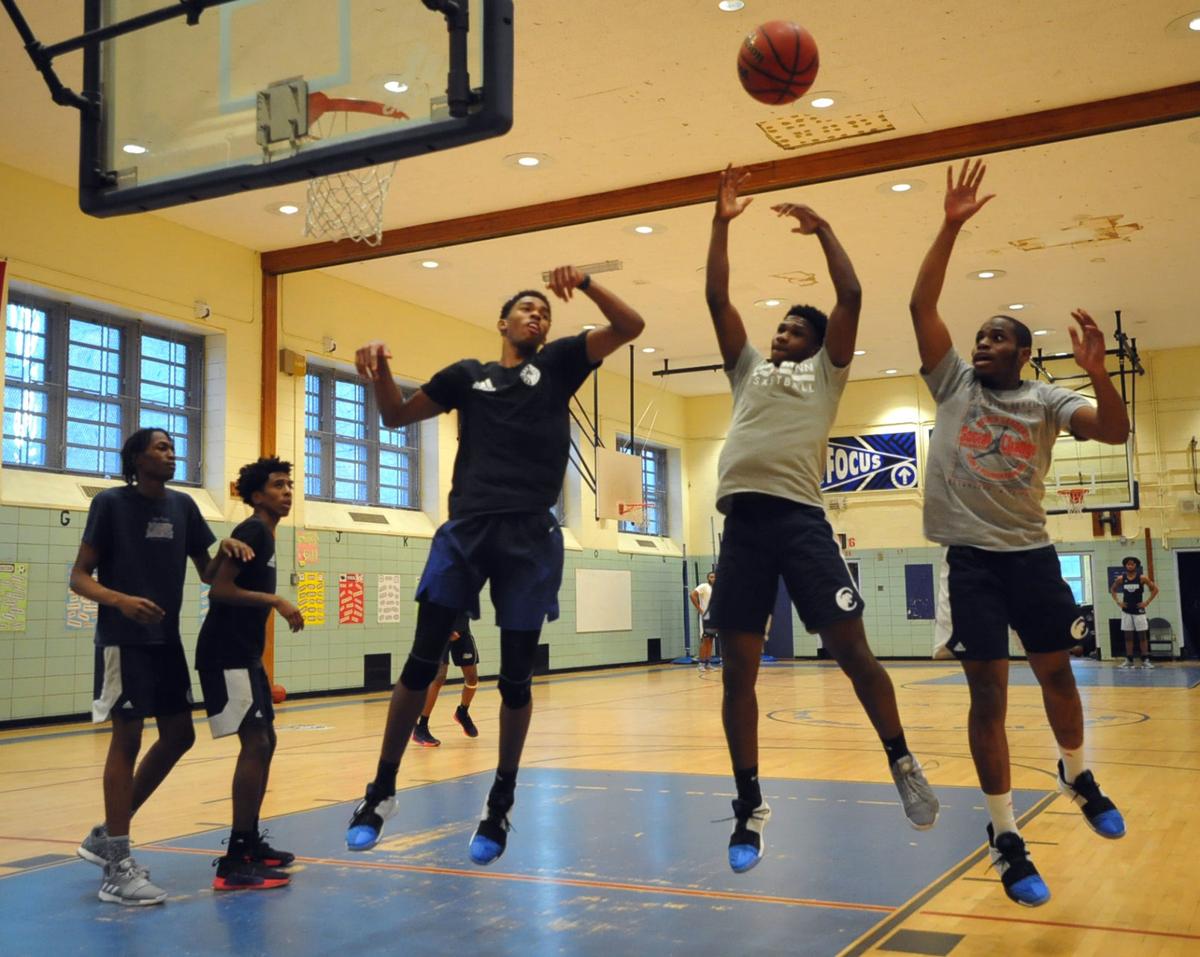 Players practice on Tuesday in the gym at South Bronx Prep 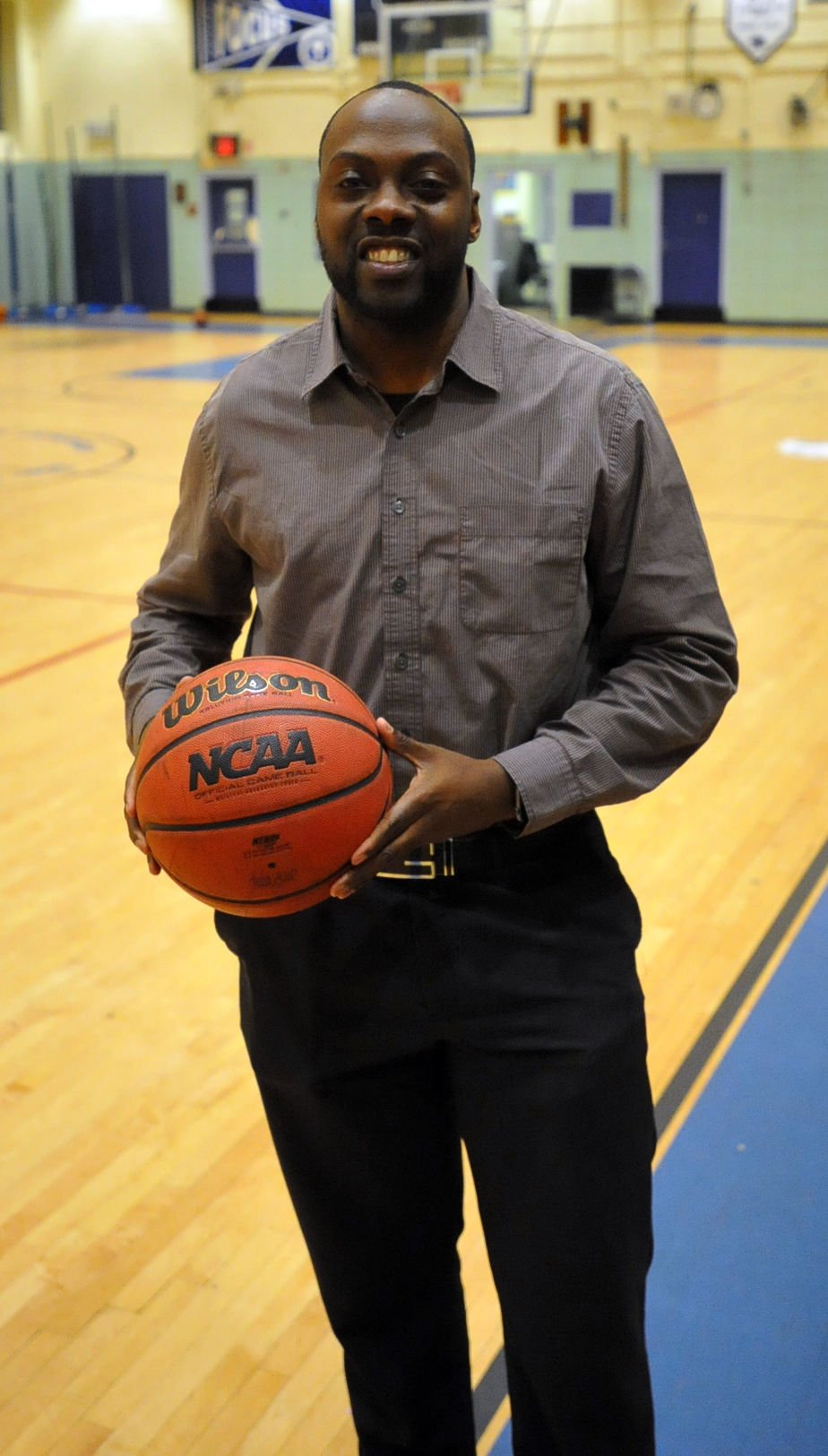 NEW YORK — You saw “South Bronx” in the headline. What came to mind? C’mon, be honest.

What do we, as upstate New Yorkers, really know about the South Bronx, except stereotypes left over from the past? Perhaps that’s crossed your mind this week if you’ve thought about the Federation Tournament of Champions.

They know what they’re in for. The Cougars will be playing for the first time on a court Glens Falls has seen many times before. There will be about 6,000 fans on hand and almost all of them will be rooting for the home team. In many ways it looks like an uphill climb for the Cougars.

But you have to remember, they’re from the South Bronx. Fighting against the odds is nothing new.

It’s Tuesday afternoon and rush-hour traffic is crawling along on Willis Avenue. Eateries, appliance stores and small newsstands compete for business. There are a few shuttered buildings along the way, but the sidewalks are filled with people at 149th street.

If not for the tall buildings in the distance, it might look and feel like a downtown in any other small city.

This is a long way from the South Bronx of the late 20th century that had so many issues with crime and fire, often portrayed as an urban wild west in TV programs and movies. New York City Police Department’s 40th Precinct, which covers this area, reported 72 murders in 1990. There were eight in 2018.

And whatever problems there have been, this is a place that hundreds of thousands of people call home.

“There is a stereotype (about the area) that does not capture the warmth and love and just the personality of the South Bronx,” said Dr. Ellen Flanagan, a Binghamton native who is principal of South Bronx Prep.

But there are challenges for the students who go to school here. There is crime. There is poverty.

The Department of City Planning lists the poverty rate at 29 percent for Bronx Community District No. 1, which serves an area that includes South Bronx Prep. The non-fatal assault rate and incarceration rate are above average for the city.

Nobody understands the challenges better than boys basketball coach Paul Campbell, who grew up in the South Bronx under difficult conditions. He played basketball at Wings Academy before moving on to study at the University at Buffalo.

“Basketball saved my life, pretty much,” he said. “Playing basketball, being in school all day, playing in tournaments, being around mentors, it really helped me to stay focused. Because the streets could have easily taken me away.”

He became a math teacher at South Bronx Prep after Flanagan urged him to get his master’s degree. He has been head coach since 2010-11, leading the program on a steady rise that resulted in the school’s first PSAL Class B title last weekend.

Campbell hopes basketball can be for his players what it was for him. He sees it as a “sanctuary,” something to get them past the difficulties they face outside of school, to give them structure and focus, to keep them moving forward, toward whatever they’re going to do after high school.

“We come from similar areas, so we share similar struggles,” senior Jordan Agyemang said of his teammates. “One of the right things about our day is playing basketball. Playing basketball is like a stress reliever.”

The school itself is not much to look at. It’s a long building stretching between Willis Avenue and 3rd Avenue in the Mott Haven neighborhood, about a mile southeast of Yankee Stadium. The nondescript main entrance is on a side street. Air conditioners protrude from windows.

It was once a junior high school with a violent history that was shut down in 2004. South Bronx Prep and the Laboratory School of Finance and Technology now share the building.

Don’t let the “prep” title fool you. This isn’t a fancy college prep school that skims the best students off the top. Flanagan calls it a “neighborhood school” that draws most of its students from the housing projects in the surrounding area. And it’s a success story.

Mayor Bill de Blasio held a press conference at South Bronx Prep last year after the school attained a graduate rate of 96 percent — well above the city-wide average of 72 percent — and a drop-out rate near zero. Flanagan said many of the students are the first in their family to graduate.

“We are a hundred percent relationship-based,” she said, “the idea that we’re on their case but on their side. We don’t give up.”

Flanagan said the school only had three sports when she first became principal 12 years ago. Now they have 14 sports, along with many other after-school activities.

“Sports was so huge for me growing up,” she said. “I was a runner, and I remember going to Saratoga Springs for our states, and it was why you went to school for many kids.”

Academics is important at South Bronx Prep, as it is at most every school, but rounding out the day is important, too. It helps the school become a “safe haven,” as Campbell puts it, that keeps students away from drugs and crime on the streets.

The South Bronx Prep basketball players spend a lot of time in school, and that’s by design. The team has a study hall after school from 3 to 5 p.m., then practices in the gym as late as 7:30.

“When they get out of practice, they’re good and tired,” Campbell said, “so they go directly home. No time to hang out.”

The gym at South Bronx Prep has only four rows of bleachers limited to one side of the gym. They might squeeze in 150 fans for a home game, a stark contrast to the thousands who have watched Glens Falls games throughout the season.

There is some irony in the fact that South Bronx Prep, which is part of a city of millions, will play in front of its biggest crowd by far when it comes to small-town Glens Falls.

“This basketball team has never played in that type of situation,” Campbell said. “It’s going to be new for them, but they’re more than ready. They’re hungry and focused.”

“It’s exciting,” Agyemang said, “but at the same time we’ve got to stay focused, because we have a goal to win it all. It’s going to be an awesome experience, but we’re focused on winning.”

How Saturday’s game will play out remains to be seen. Both teams have high-scoring offenses — SBP has scored more than 100 points four times this season, and Joseph Girard III ... well, he needs no introduction.

Campbell knows his team is walking into the lion’s den. They’ve never been there before. They’ll be surrounded by GF Nation. He’s looking forward to it.

This weekend, Glens Falls will be home away from home for basketball champions

South Bronx Prep, in the Mott Haven section of the South Bronx.

The South Bronx Prep team practices in their gym.

Players practice on Tuesday in the gym at South Bronx Prep