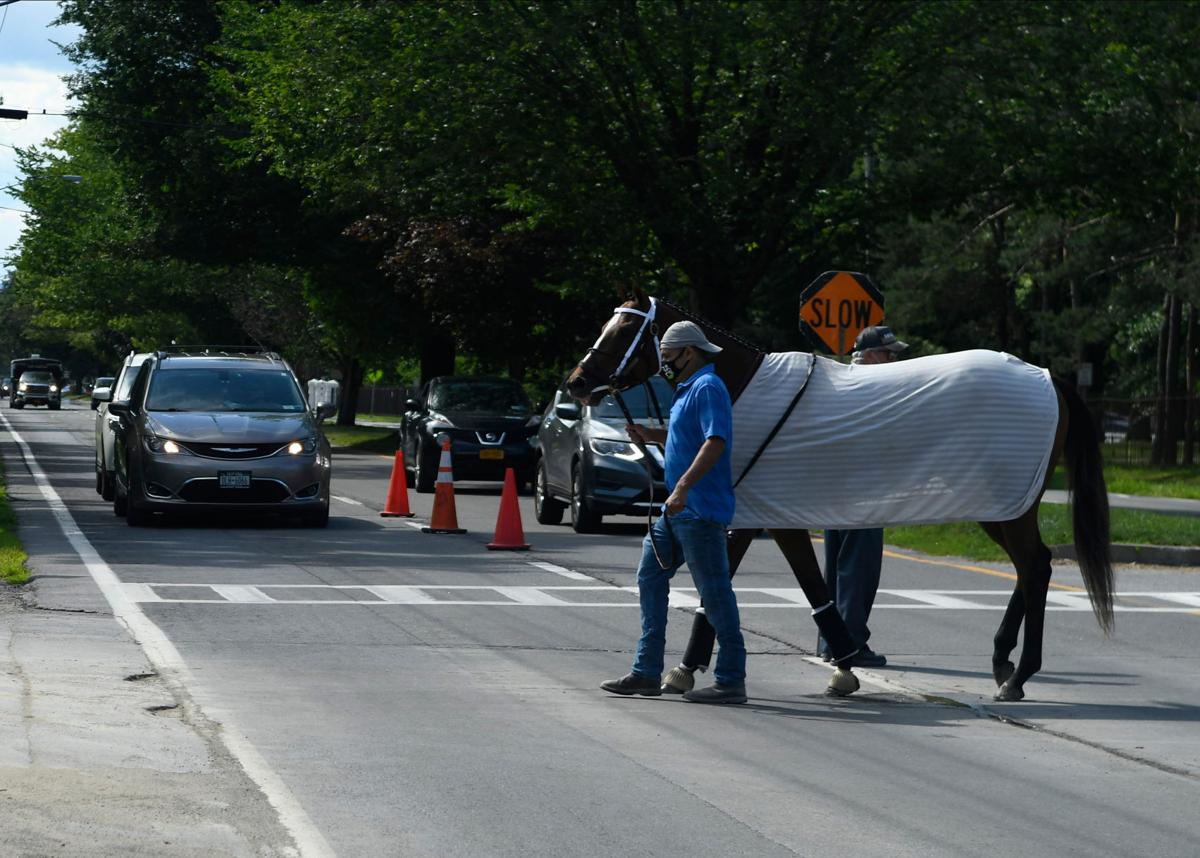 A thoroughbred is led across Union Avenue into Saratoga Race Course on Friday, the day before the Whitney Stakes, in Saratoga Springs. 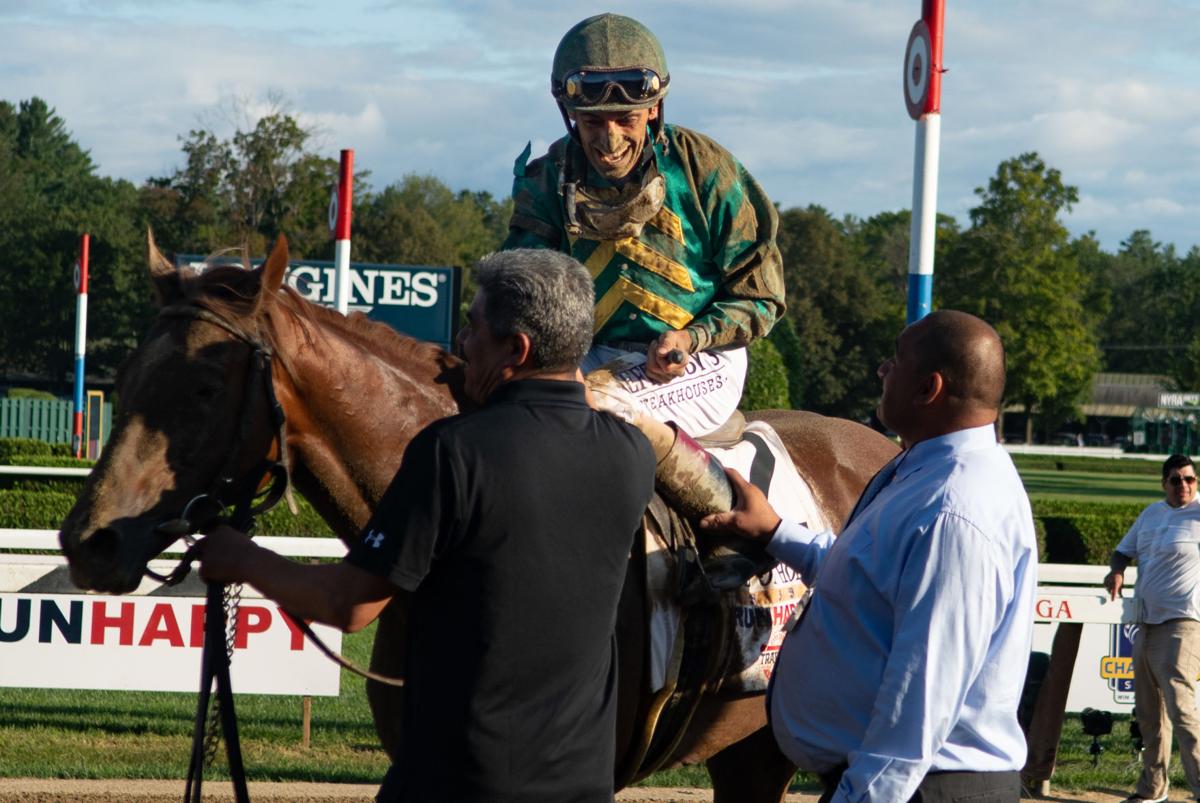 Jockey John Velazquez laughs with associates following Code of Honor's 2019 victory in the Grade I Travers Stakes at Saratoga Race Course. Code of Honor is attempting to become the first horse since Will's Way to win the Travers one year and the Whitney the next.

SARATOGA SPRINGS —Those concerned about a lack of entries for the Grade I, $750,000 Whitney Stakes causing a lack of handle need not worry.

All five horses running in the race, which serves as a “Win and You’re In” for the Breeders’ Cup Classic, are millionaires.

There are humans trying to put themselves in elite company, as well. Trainer Bob Baffert, who sends out Improbable, is attempting to become the first trainer to win consecutive Whitneys since fellow Hall of Famer Scotty Schulhofer did it with Colonial Affair and Unaccounted For in 1994 and 1995. McKinzie won last year’s Whitney for Baffert.

McGaughey knows Code of Honor likes Saratoga, but noted after the main track’s refurbishing during the offseason, it’s not exactly an apples-to-apples comparison.

“He’s always liked it up here and liked training over the track,” McGaughey told the New York Racing Association at the Whitney draw. “But it’s a different main track up here than it was in the Travers. How much different I’m not sure. He’s been training well since we’ve come up here this year, so hopefully he runs well again.”

Code of Honor is coming off a third in the Grade I Metropolitan Handicap. Before that, he won the Grade III Westchester.

Code of Honor isn’t the only horse with a proven affinity for Saratoga. Tom’s d’Etat has won here at ages 3, 4 and 6. In fact, his only loss at the track came last year when he finished fourth in the Grade I Woodward.

He has won his last four races, including the Grade I Stephen Foster at Churchill Downs most recently, on June 27.

“I can tell in the couple weeks he’s been here, his hair is great and his eye is just what you want and it seems like he knows just where he is,” said trainer Al Stall, who last won the Whitney in 2010 with Blame.

Chester and Mary Broman have been reducing the number of horses they own, though they still are breeding them on their Chestertown farm. But Mr. Buff, winner of $1,084,536 in his career, has danced all the dances for New York-breds so far.

“There are no more New York-bred races this year, so basically this horse was going to be sitting on the fence for the whole summer unless we ran in this race,” trainer John Kimmel said. “He’s out of conditions, obviously.”

Mr. Buff has two wins and a second in five starts at the Spa, and Kimmel noted that the redone Saratoga track is more like Aqueduct, where the horse has done especially well. Still, he’s under no illusions.

“We know this place has been known as the ‘Graveyard of Favorites,’ but Mr. Buff is stepping into some deep water in this race,” Kimmel said.

By My Standards won the New Orleans Classic and Oaklawn Handicap before finishing second to Tom’s d’Etat in the Stephen Foster. Improbable is coming off a victory in the Grade I Hollywood Gold Cup, but has never won outside of California.

Saturday’s card also has the Grade I Personal Ensign for fillies and mares, featuring last year’s winner and $7.3 million-earner Midnight Bisou, the Grade I H. Allen Jerkens, the Grade II Bowling Green on the turf and the Caress.

Why bet anyone else?

She’s My Type, a French-bred, showed good speed late to capture the $100,000 Coronation Cup for the hottest duo on the track: jockey Joel Rosario and trainer Christophe Clement.

In the shortest race of her six-race career, the 3-year-old filly covered the 5 1/2 furlongs on a firm Mellon Turf Course in 1 minute, 1.67 seconds.

It was Clement’s fourth stakes win so far and his meet-leading 13th of the meet. For Rosario, it was his 19th win of the meet and 10th with Clement. The pair also won the eighth race just before the Coronation Cup with Jewel of Arabia.

Clement said it was a special win because it was for Ghislaine Head, the wife of prominent French owner/trainer/breeder Alec Head, who turned 96 Friday and for whom Clement worked. Clement called Alec Head a mentor.

“She showed a very good turn of foot,” Clement said of She’s My Type. “She had a chance to finish and finished very well.”

Coming Saturday: Three Grade I races, including the $750,000 Whitney.

Improbable acted up in the gate, but once out, he knew what to do, winning the Grade I Whitney Stakes by 2 lengths.

A thoroughbred is led across Union Avenue into Saratoga Race Course on Friday, the day before the Whitney Stakes, in Saratoga Springs.

Jockey John Velazquez laughs with associates following Code of Honor's 2019 victory in the Grade I Travers Stakes at Saratoga Race Course. Code of Honor is attempting to become the first horse since Will's Way to win the Travers one year and the Whitney the next.