John Velazquez, riding Medina Spirit (right) leads the field across the finish line to win the 147th running of the Kentucky Derby at Churchill Downs on Saturday. 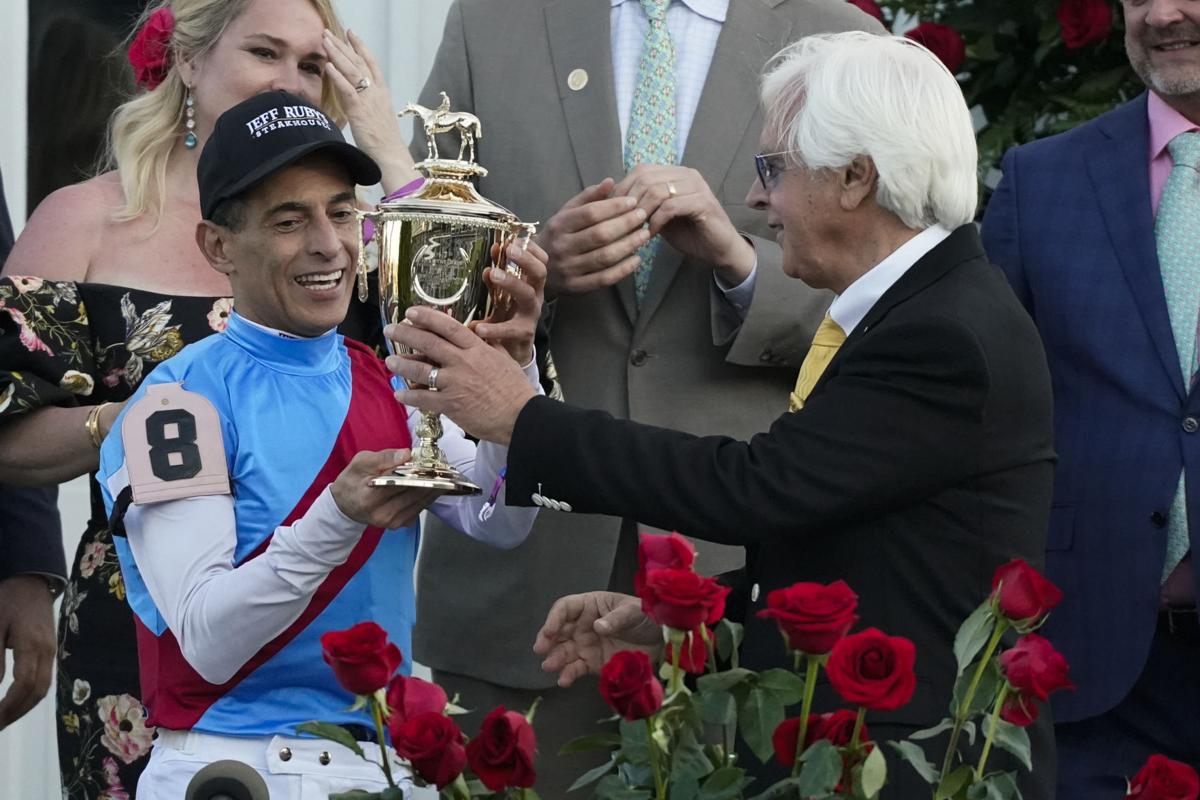 LOUISVILLE, Ky. — John Velazquez was in a familiar place, in the lead aboard Medina Spirit in the Kentucky Derby and holding off the stretch bid of three challengers. This time, Bob Baffert couldn’t believe what he was seeing.

Medina Spirit won by a half-length on Saturday, giving Baffert his seventh victory, the most of any trainer in the race’s 147-year history.

The jockey and trainer — both Hall of Famers — teamed up eight months ago to win a pandemic-delayed Derby in September with Authentic, who raced to an early lead and hung on. That wasn’t so surprising.

Sent off at 12-1 — astronomical odds for a colt trained by the white-haired, two-time Triple Crown winner — Medina Spirit was in a street fight thundering down the stretch.

The dark brown colt was pressed by Mandaloun on his outside. Hot Rod Charlie was coming fast outside of Mandaloun, with 5-2 favorite Essential Quality giving chase on the far outside.

“I kept waiting for all those horses to pass him,” Baffert said. “When he got to the eighth pole, we said, ‘This guy has got a shot.’”

Velazquez knew he had plenty of horse left.

“We got to the 16th pole and he put his ears down and kept fighting,” the jockey said. “I was so proud of him.”

In the paddock, Baffert watched in amazement as one of the least heralded Derby runners of his long career dug in at the front.

“You could tell he was laying it down and Johnny was riding hard,” Baffert said. “He was just relentless.”

Velazquez earned his fourth Derby victory aboard the colt that was purchased as a yearling for $1,000 and was a bargain-basement buy at $35,000 for current owner Amr Zedan of Saudi Arabia. By comparison, Zedan recently paid $1.7 million for an unraced 2-year-old.

“He doesn’t know how much he cost,” Baffert said, “but what a little racehorse.”

Baffert punched his right arm in the air after watching the finish on the video board. He was buried in celebratory hugs by his wife, Jill, and youngest son, Bode. Jill Baffert had reason to celebrate earlier, when a horse she co-owns and is trained by her husband won a $500,000 race on the undercard.

It wasn’t false modesty. Baffert had been low-key about his chances after two of his best horses — Life Is Good and Concert Tour — were derailed along the Derby trail.

“I cannot believe he won this race,” the trainer said. “That little horse, that was him, all guts. He’s always shown that he’s been an overachiever. His heart is bigger than his body.”

Medina Spirit has never finished worse than second in six career starts and two of his three losses came to Life Is Good, who likely would have been the Derby favorite had he not been injured.

“I’ve rehearsed this speech in the shower and treadmill,” Zedan said. “Never thought I was going to do it, but here I am.”

Medina Spirit broke sharply out of the gate while Essential Quality and 9-2 second choice Rock Your World bumped shortly after the start.

“We were done,” Rock Your World’s trainer John Sadler said. “No chance.”

Essential Quality was five horses wide in both the first and second turns before taking aim at Medina Spirit in the stretch and coming up short in fourth place.

“He didn’t get the greatest trip,” trainer Brad Cox said of the favorite. “That can happen when you start from the 14-hole.”

Mandaloun — Cox’s other entry — finished second and returned $23.00 and $13.40. Hot Rod Charlie, partly owned by five former Brown University football players, was another half-length back in third and paid $5.20 to show.

Baffert won back-to-back, having tied Ben Jones with his sixth victory last year when the race was run in September without spectators because of the coronavirus pandemic.

“The seven wins? I can’t believe I won two,” Baffert said. “That’s what I love about this business: Nobody knows for sure.”

A week earlier, Baffert sat in front of the Arkansas Racing Commission appealing a 15-day suspension that was part of his punishment for a pair of drug positives involving two of his horses from May 2020. He was successful, with the commission voting unanimously to reduce his fines and overturn the suspension.

“I’m just so grateful I can still compete at this level,” Baffert said.

Velazquez became the first jockey to win consecutive Derbies since Victor Espinoza in 2014-15. The 49-year-old rider also completed the Kentucky Oaks-Derby double for the first time since Calvin Borel in 2009, winning the $1 million race for fillies on Friday.

Velazquez had told Baffert a night earlier not to underestimate Medina Spirit, named for the second holiest city in Islam and capital of the Medina province in Saudi Arabia.

“Every time I asked him for a little more, he gave me more,” Velazquez said.

The Derby went off on a sun-splashed day with attendance of 51,838 — about 100,000 fewer than usual. Fans were told to wear masks inside the track, but plenty of them did not.

Francisco Lindor hit a tying, two-run homer in the seventh inning and the New York Mets rallied to beat the Arizona Diamondbacks in 10 innings.

The Yankees beat the Nationals in 11 innings on Saturday, and used small ball to do it.

Wade Miley pitched baseball’s second no-hitter in three days — and fourth already this season — leading the Cincinnati Reds to a 3-0 win over the Cleveland Indians.

John Velazquez, riding Medina Spirit (right) leads the field across the finish line to win the 147th running of the Kentucky Derby at Churchill Downs on Saturday.