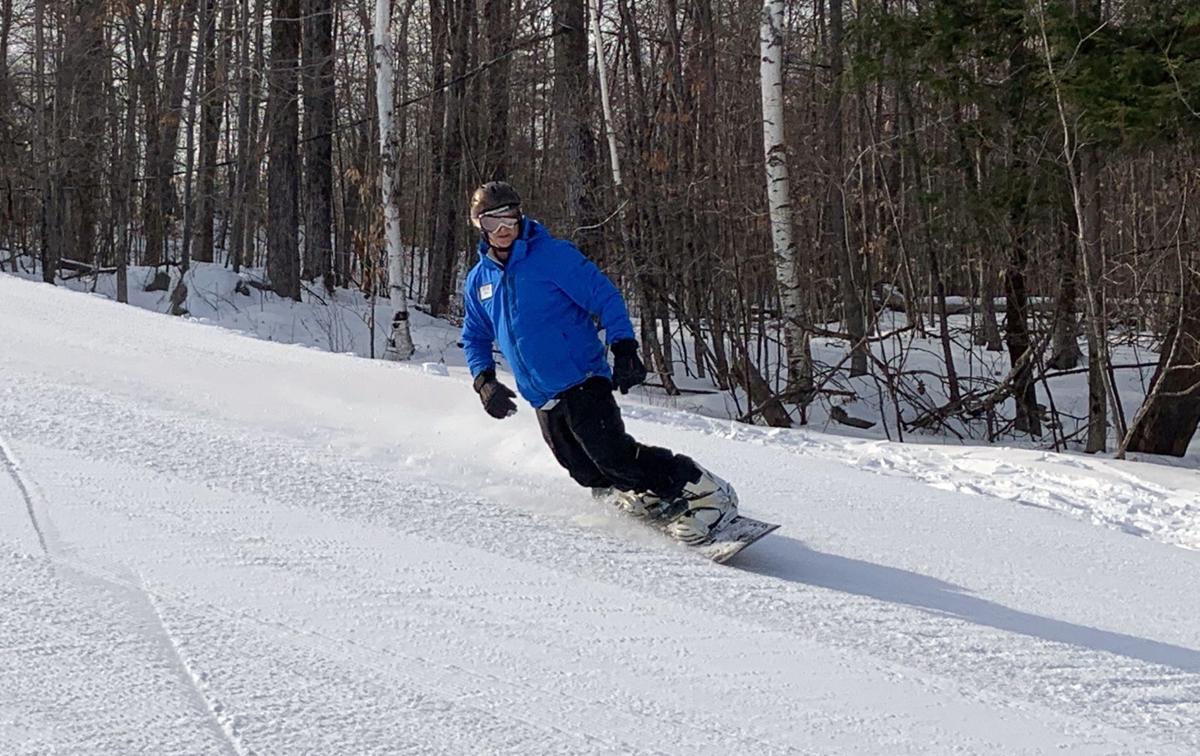 West Mountain snowboard instructor Brian Kunst carves turns on The Frolic trail at West Mountain Ski Center on Christmas Day. Kunst didn't have any lessons to give so he got to free ride for a couple of hours before his Christmas dinner plans. 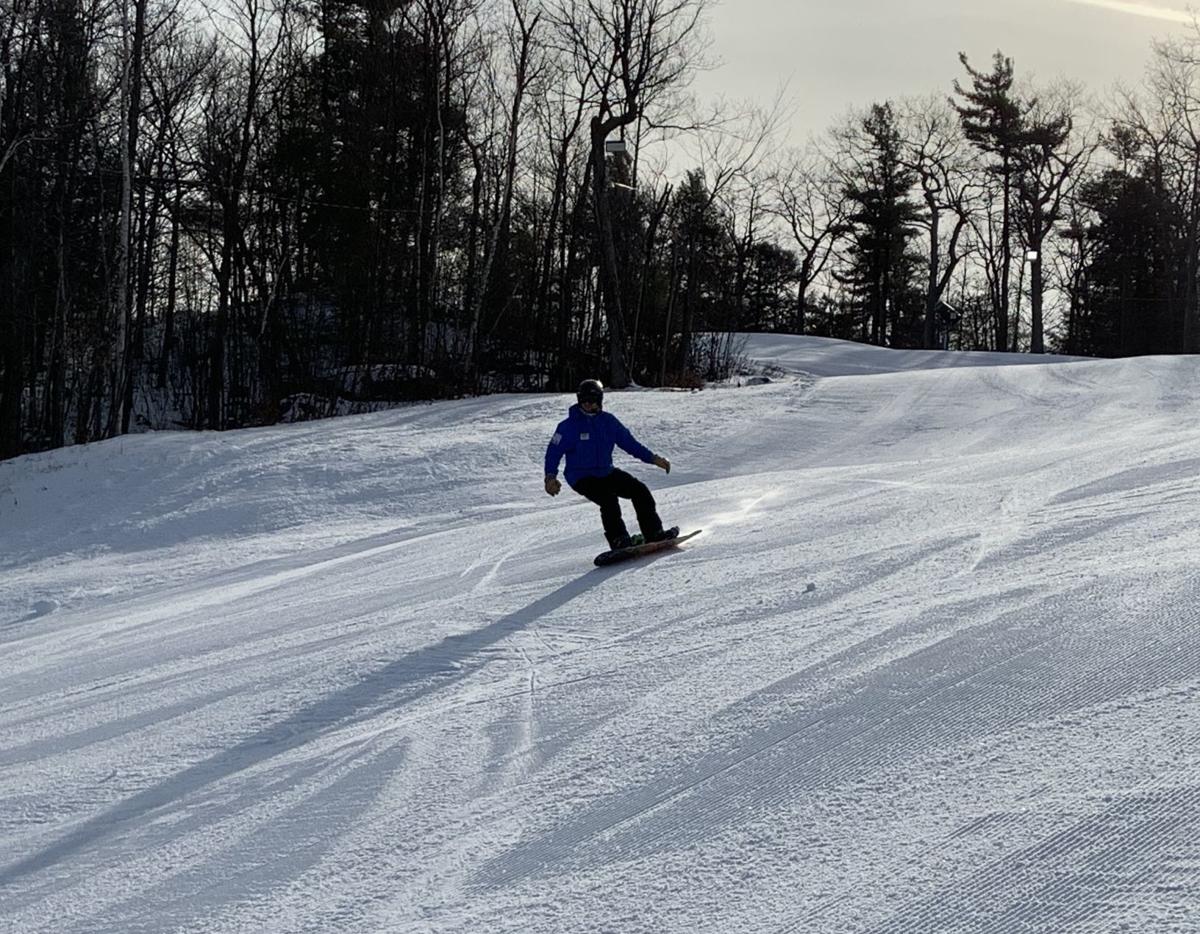 West Mountain snowboard instructor Mike Wickert carves turns on The Frolic trail at West Mountain Ski Center on Christmas Day. Wickert didn't have any lessons to give so he got to free ride for a couple of hours before his Christmas dinner plans.

A week ago, West Mountain Ski Center co-owner Spencer Montgomery threw out a Christmas joke about the projected weather forecast for the super important Christmas week ahead.

“I must have been good last year,” he said with a laugh, alluding to the powers of the reindeer-pulled man in red.

A week later, on a sunny Christmas Eve morning, he and other ski industry officials were all singing the praises of early season conditions.

“All the stars lined up,” Montgomery said as he was getting ready to go ski with his 11-year-old son.

Montgomery said he would like colder temperatures at night for better snowmaking, but he said warm skier days are better for Christmas week than cold snowmaking nights.

Although plans to open the northwest base lodge and the newest lift might not happen this week as hoped, Montgomery said it’s still a possibility if overflow parking is needed, with skiing on Bannister and Northwest Passage.

Charles “Chic” Wilson, at Willard Mountain in Easton, said he has about 80% of his trails open this Christmas week.

“We’re ahead of the game. We have more terrain than we typically would for Christmas week,” a pleased-sounding Wilson said as the lifts were just turning under sunny skies Tuesday morning.

As for the weather, Wilson said, warmer days and cold nights for snowmaking is what the industry needs for Christmas week. He said people don’t ski when it’s below zero or raining.

“For a true skier or snowboarder, it’s hard to let a day like this go by without making a few runs,” he said.

Gore Mountain Marketing Director Emily Stanton said the Johnsburg ski area is in great shape too, with new “family-friendly terrain” opening on the north side of the mountain Thursday.

“It’s ideal snow for learning to welcome beginners, as well as plenty of expert terrain for strengthening current skills,” she said, adding that the weather has been a perfect mix of “beautiful days and good snowmaking nights.”

There was a two-hour window from noon to 2 p.m. that wasn’t accounted for on Christmas. It came after the presents, french toast, fruit and coffee, and before Christmas cocktails at a friend’s house and crab legs dinner back home.

West Mountain was calling me for a handful of runs and the corduroy didn’t disappoint.

I blasted out six runs down trails including The Cure, Frolic, Gnar-Wall, Alley and Go-Go and Holy Mackerel.

I also stopped to snap some pictures, and captured West Mountain snowboard instructors Brian Kunst and Mike Wickert free riding while waiting for lessons that I don’t think ever came.

They were fine with that, though, because they got two hours of sun-drenched slopes like me. Kunst’s son graduated with my oldest daughter and both of his daughters babysat for my kids.

We chatted about Christmas and how much it has changed since our kids were little. My oldest daughter is in Spain and missed Christmas for the first time. He had only two of four kids home and said something like how it’s less magical these days, and he’s right. But he also talked about a plan they’ve used in the past to include all his kids on Christmas day.

For son Keenan, for example, they’d send presents ahead of time that he couldn’t open until Christmas morning. Then he’d Skype in and open his with the family.

“It felt like he was there,” he said of the 29-year-old who is serving in the Air Force.

I like the plan and might use it in the future if my girls miss a future Christmas.

Kunst and Wickert both said they had Christmas dinner plans later that day, which Wickert said was perfect.

“I’d rather be out here doing this than sitting inside all day,” he said.

My sentiments exactly. It was the perfect mid-day Christmas treat. Now off to that friend’s for cocktails!

Dave Blow writes a weekly winter sports column for The Post-Star during the season.

This Sighting features a yellow warbler.

One of two Sightings from Bob Henke this week.

Bob Henke writes this week about the six-spotted tiger beetle.

One of two Bob Henke Sightings for the weekend.

One of two Bob Henke Sightings for the weekend.

Bob Henke writes about hornets in this week's outdoors column.

Bob Henke commentary: Bumbling into the subject of anting

A hummingbird works at a feeder during a snowstorm.

West Mountain snowboard instructor Brian Kunst carves turns on The Frolic trail at West Mountain Ski Center on Christmas Day. Kunst didn't have any lessons to give so he got to free ride for a couple of hours before his Christmas dinner plans.

West Mountain snowboard instructor Mike Wickert carves turns on The Frolic trail at West Mountain Ski Center on Christmas Day. Wickert didn't have any lessons to give so he got to free ride for a couple of hours before his Christmas dinner plans.