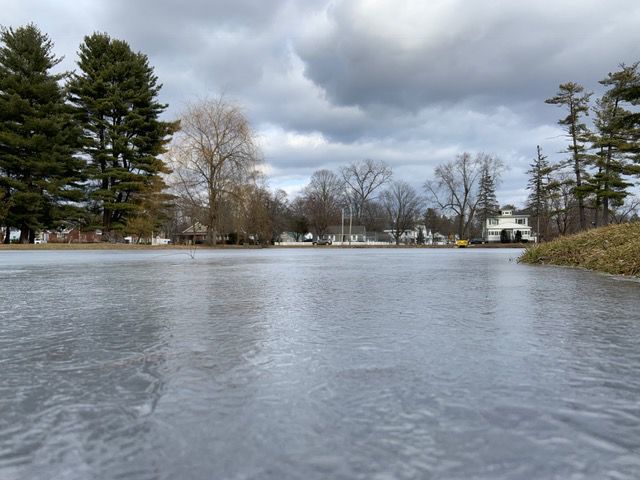 The ice on Crandall Pond is seen Wednesday. The season-opening party originally set for Friday night has been rescheduled for Jan. 31. 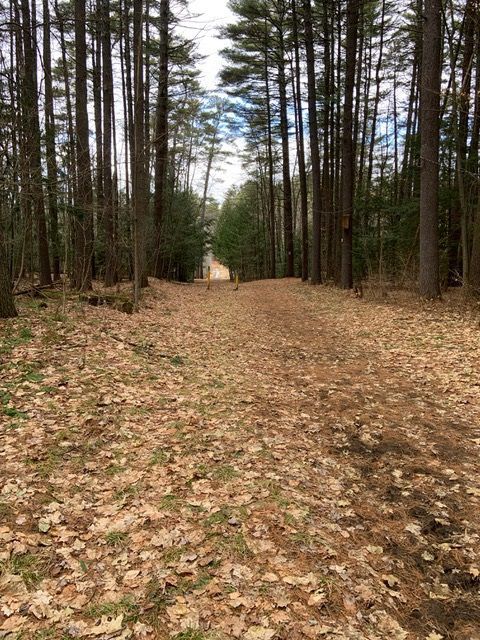 An entrance to the Cole's Woods cross-country ski trails is seen Wednesday. Snow is in the forecast for this weekend, so this scene could change dramatically in a few days.

I walked by Crandall Pond on Monday and salivated over the glassy ice.

When we get winter rain and 60-degree temperatures like last weekend, as depressing as it is, Crandall Pond gets a Mother Nature Zamboni job, making the ice like a bottle.

And I was excited that on Friday night, Glens Falls was hosting a pond-opening party on the ice with burn-barrel bonfires and hot chocolate under the lights — a good ol’ Hometown USA wholesome event.

“Hopefully it’ll become an annual tradition for the opening of the pond that we can build on,” said Palmer, who came up with the idea. “Last year, I was advocating to get it open at night. In winter, we have less chances to get outdoors together, like with ‘Take a Bite’ in the summer, and it’s just a nice thing for families to be able to do. We put light in and that was great.

“To build on that, we wanted to do a tradition celebrating the opening of the pond,” she added.

But when I got home from walking my dog, I got a call from Palmer saying the event is being pushed back to Jan. 31, for two reasons.

First, she said, she’s received so much interest from word of mouth that city DPW workers will be installing a second light toward the west side of the pond to better illuminate the surface for skaters.

Second, she said, after the weekend warmth, they simply want to make sure the ice is “totally solid” for the crowd that’s expected.

I was bumming, because I was itching to skate on that glass. But safety first, I get that.

And I have to say, I LOVE that Glens Falls is doing this.

I have skated on that pond for more than two decades and I think the city, thanks to people like Palmer, Councilman Jim Clark and Acting Recreation Superintendent Mike Mender, is realizing more than ever what a wholesome asset it can be.

Palmer said DPW workers have even been flooding the ice, which never used to happen.

Hot chocolate is provided, but Palmer said attendees must bring their own mugs.

It’s been a rough patch for the Nordic training season with the Cole’s Woods trail system currently completely bare. But local coaches are taking advantage of Gore Mountain’s man-made snow on its Nordic trails and are thankful they are there.

Glens Falls Nordic coach Phil Klaiber said despite having to drive almost an hour both ways, days like last Friday before the rain make him realize what an asset the trails are.

“The snow that day was unbelievable,” he said.

Klaiber said local skiers were able to train on local trails early this year after December snowstorms, but in recent weeks he was chasing shady pockets in Crandall Park or at Bend of the River Golf Course in Lake Luzerne.

“The past few days we were on roller skis on the bike trail,” he said, sounding a little dejected.

She also stressed that the trails are lit and open every night, adding that Tuesday night kicked off the Citizen Races series, where locals can skate ski, traditional Nordic ski or snowshoe in a family-fun weekly race.

“I was down at the Ski Bowl today and the snow is doing very well,” she said, praising groomers and snowmakers there. “And we’ll be adding more snow this week.”

Stanton said high school Nordic racers from around the state will converge on the trails this weekend for the Mid-Atlantic Junior National Qualifiers, for points to make the Junior National team.

Garnet Hill Lodge in North River, the other usually reliable ski option when the weather isn’t cooperating, had suspended skiing as of Tuesday, but was still offering snowshoeing and fat-tire biking. Garnet Lodge associate Todd Millington said skiing was good until last weekend’s warm-up and rain.

Stanton said Gore is offering fat-tire biking on the Nordic trails as well.

The ice on Crandall Pond is seen Wednesday. The season-opening party originally set for Friday night has been rescheduled for Jan. 31.

An entrance to the Cole's Woods cross-country ski trails is seen Wednesday. Snow is in the forecast for this weekend, so this scene could change dramatically in a few days.