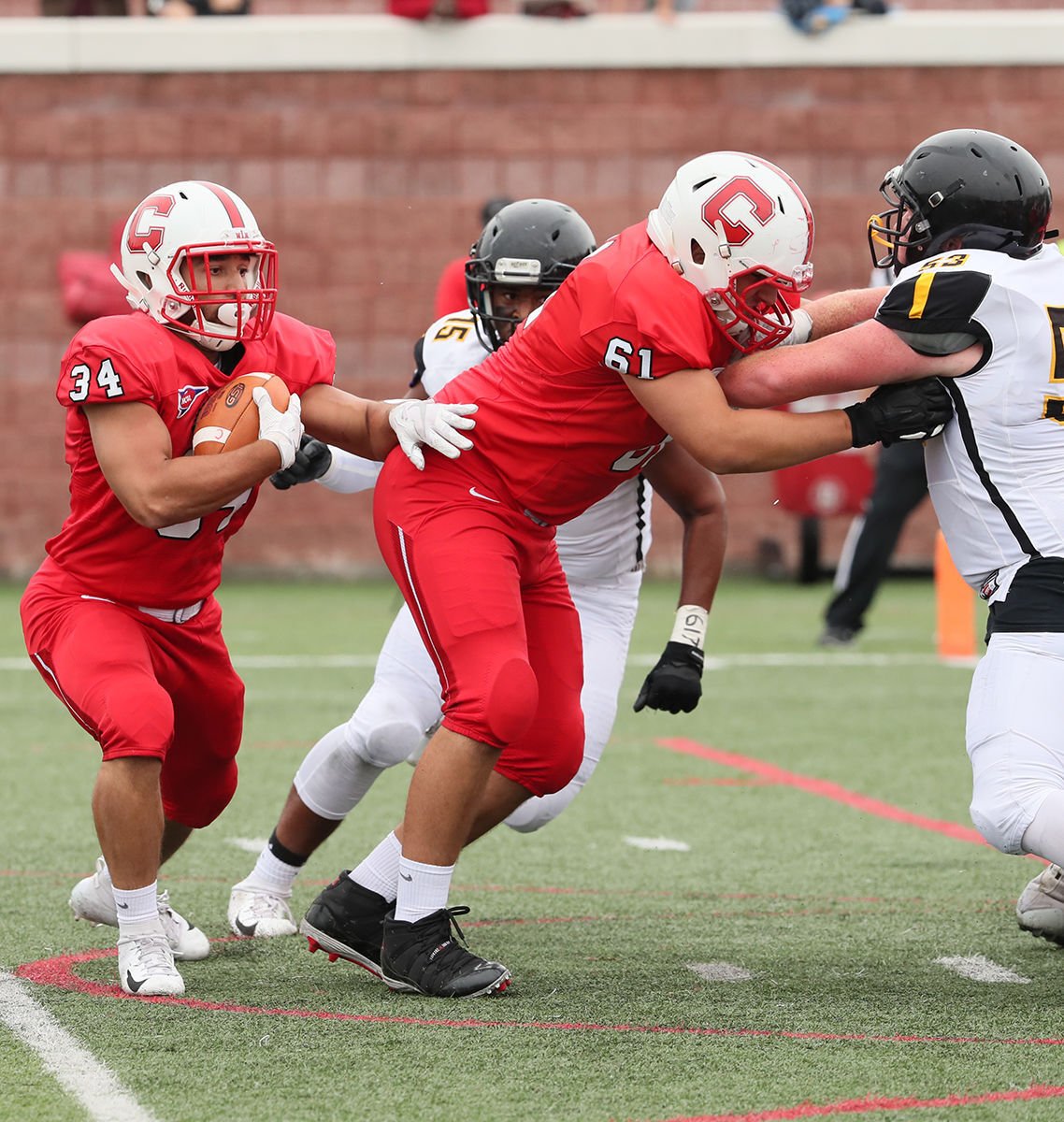 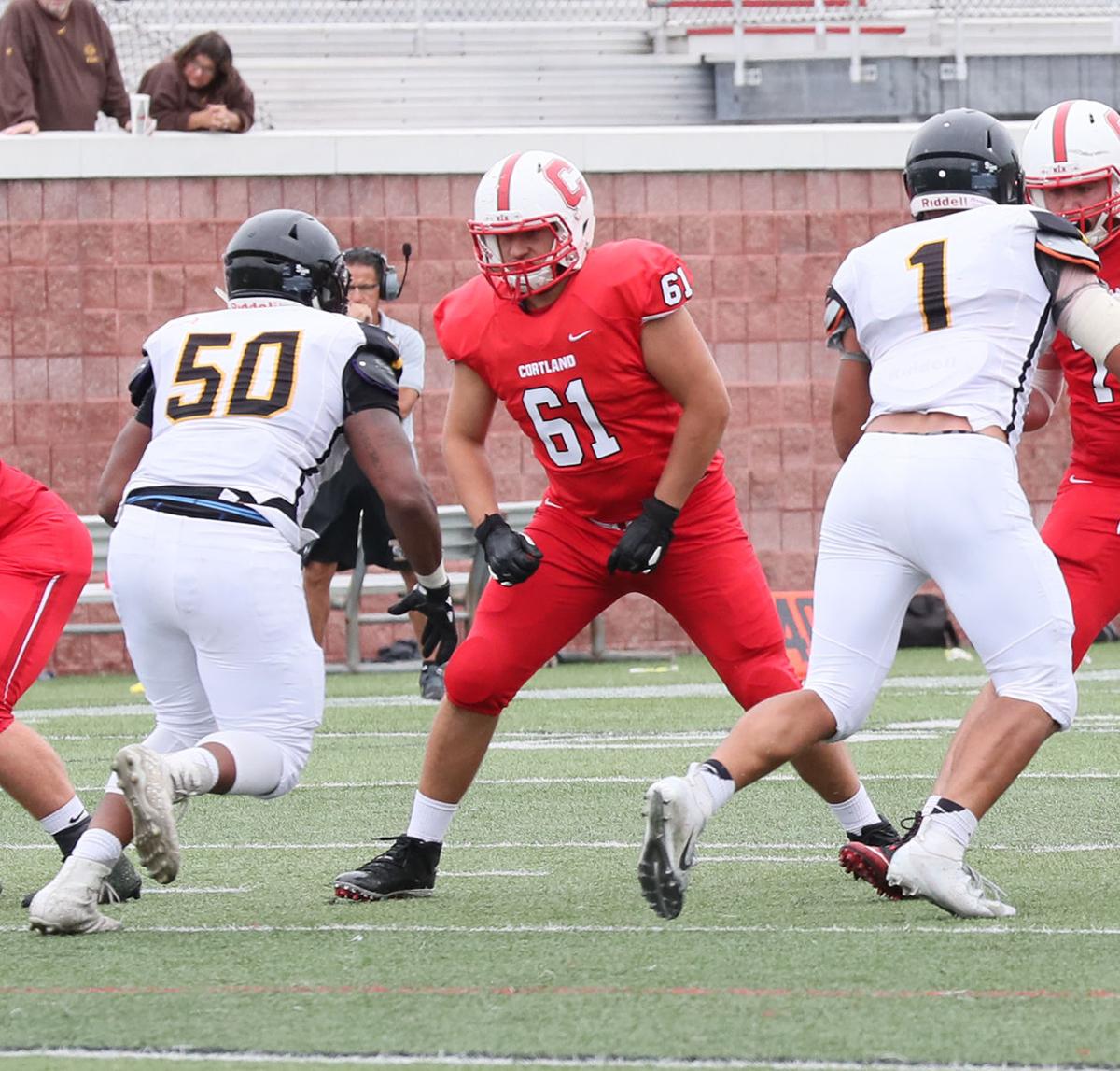 Joe Endieveri (61) of Cortland State play in a 2018 game against Framingham State.

It has certainly not been the senior year that Joe Endieveri, or any other college athlete, envisioned.

Before the coronavirus pandemic shut down in-person learning last March, Endieveri, like most college athletes, was getting ready for one last season of his chosen sport.

The former South Glens Falls standout had planned to be a starting offensive guard for the Cortland State football team.

Instead, Endieveri’s senior year has so far consisted of remote classes, weightlifting in the living room, a bout with coronavirus — and no football.

“We were excited — new coach, new team, we were looking forward to this season,” he said. “It got stripped away from us, but we’re making the most of what we’ve got.”

Earlier this month, Cortland became the third state university campus to switch to remote classes because of a spike in coronavirus cases.

Endieveri, 21, and his housemates became statistics last month when they contracted coronavirus.

“One of our housemates tested positive, so we all got tested — I tested positive,” he said. “The two-week quarantine was the worst part of it. I just felt like I had a head cold for a couple of days. We completed our isolation and tested negative, but we just transitioned to all-online classes. It’s been a rough month and a half.”

Endieveri said he and his seven housemates have a makeshift gym set up in the living room to keep themselves busy and active.

“It’s been a lot of sitting around, no football, online classes,” the 6-foot-2, 250-pound lineman said. “It’s nice that we have the weights at the house. We have 500 pounds worth of plates, a weight bench, barbell on the rack. The school is letting us use some heavy dumbbells, since they’re not training anyone right now.”

Most of Endieveri’s time is dedicated to working on his classwork for his coaching major. This semester, he has classes like history of sports in American culture, principles and theories of coaching, exercise physiology and sports nutrition.

Last March, when the pandemic shutdown sent most college students home for the rest of the spring semester, it cut short spring football practice for Endieveri and his teammates.

He and his housemates stayed in their off-campus housing in Cortland for most of the summer, lifting weights and running on the turf at a nearby high school — preparing for a fall football season that never came.

“When they canceled on us, it definitely sucked for the seniors. It wasn’t a happy day for anyone,” Endieveri said. “Now it’s weird — the people that are least upset about it are the seniors. We’ve already played for a few years.”

Endieveri said he was surprised that the State University of New York Athletic Conference canceled winter sports already, noting that winter sports practice would be starting this time of year.

He said he had heard the football team might be able to play three games in the spring, but is tempering his hopes, saying, “It definitely sucks to just anticipate it.

“I feel most bad for the freshmen,” he added. “They didn’t get to come in and get that first year of college football experience. I haven’t even met any of the freshmen, I don’t think. I wish I had those couple of weeks (of training camp) with those kids.”

Endieveri said like most people, he’s taking one day at a time amid the pandemic.

“At this point, you can’t look too far ahead,” he said.

Greg Brownell column: What lies ahead in high school sports?

The Adirondack Thunder have pulled the plug on their 2020-21 hockey season.

It's that time of month — outdoors columnist Bob Henke empties his mailbag.

More than wins, losses at stake as basketball season arrives

The goal is March Madness, but can the nation's college basketball teams get there?

Local golf scores submitted by area courses during the past week.

This week's Sightings offers up a shot of a goose.

Yankees could have more than just Mets competing for DJ LeMahieu

The Yankees may be in a battle to keep DJ LeMahieu on the roster, and not just from the Mets.

Winless Jets trying to stay positive after loss to Chargers

The winless Jets are trying to stay positive, but Sunday brings a 10th loss.

Joe Endieveri (61) of Cortland State play in a 2018 game against Framingham State. 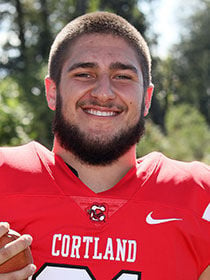