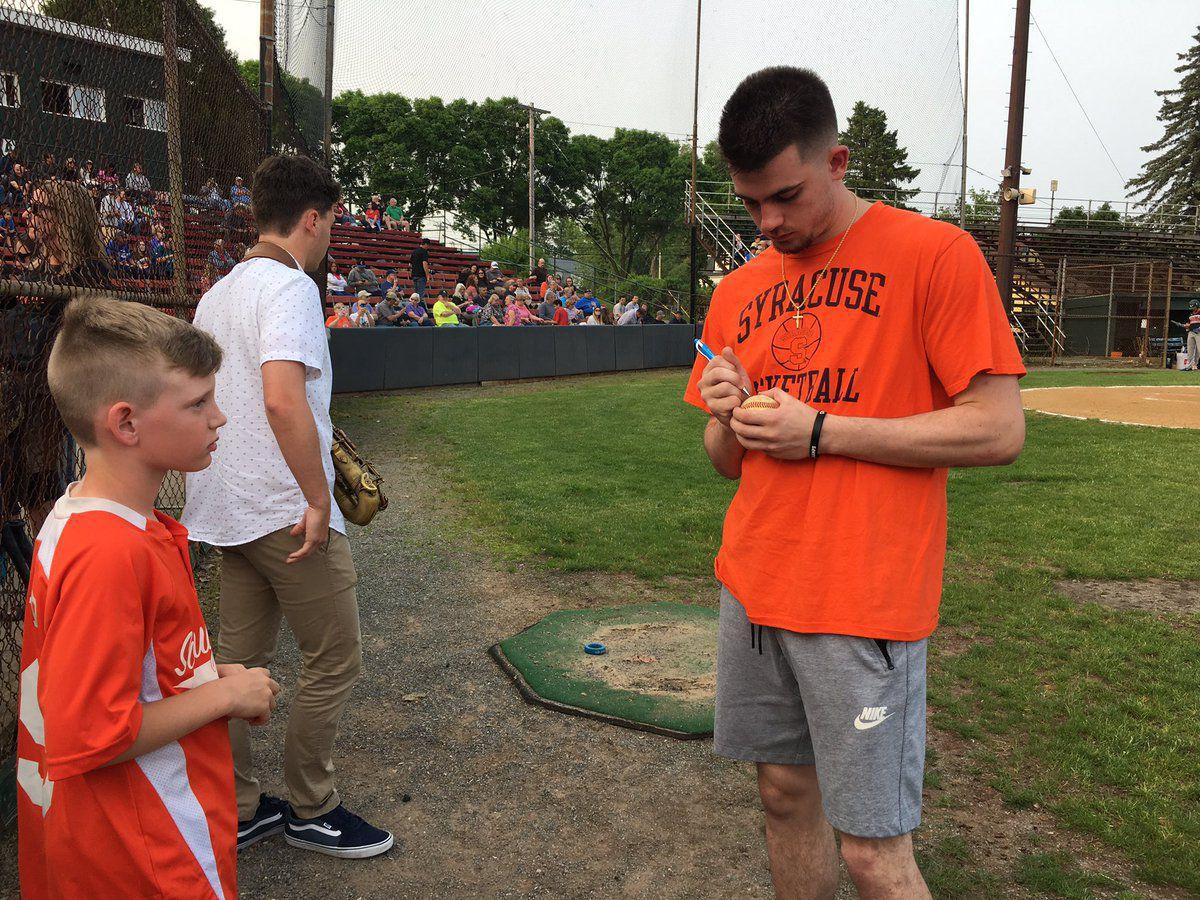 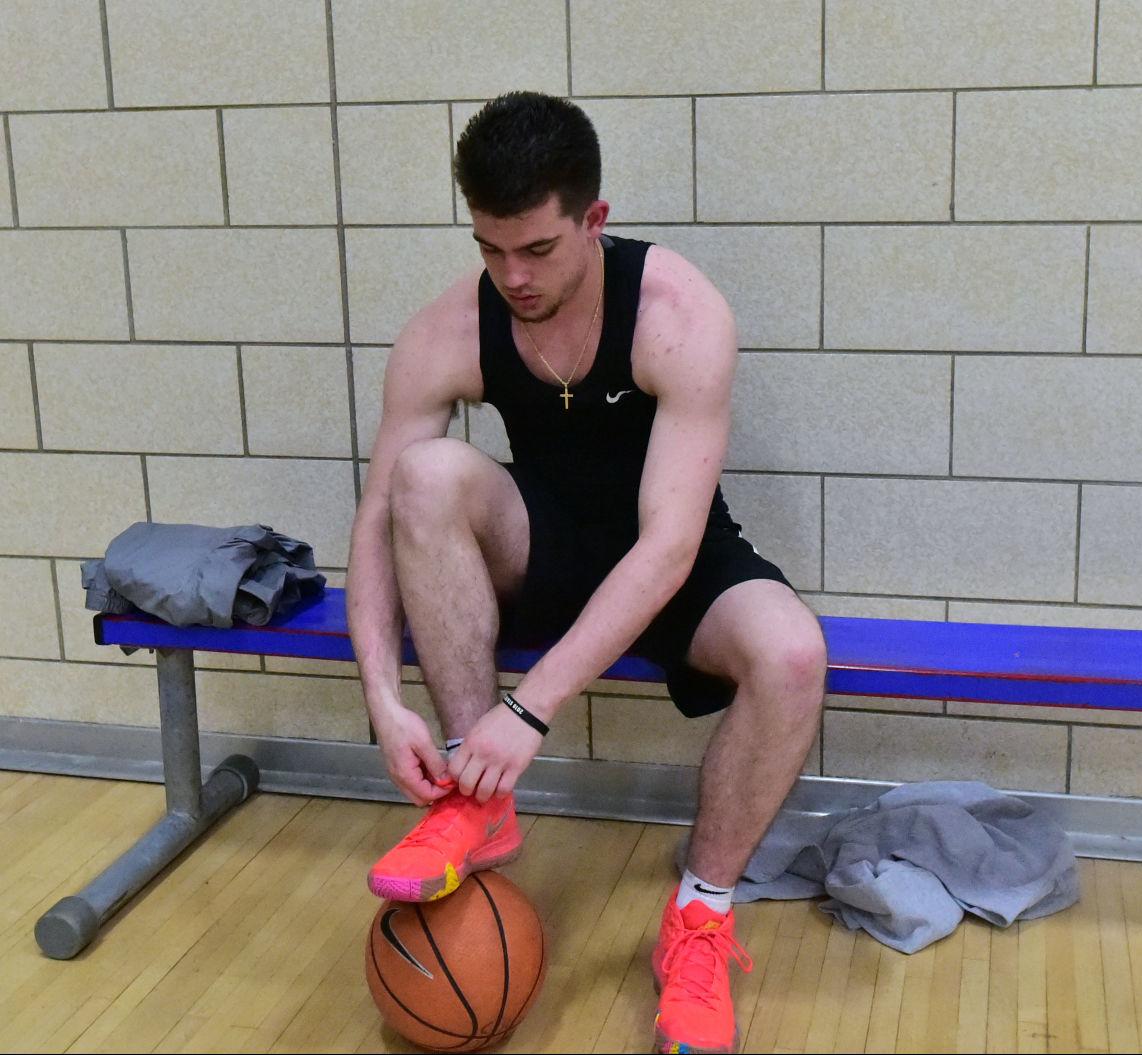 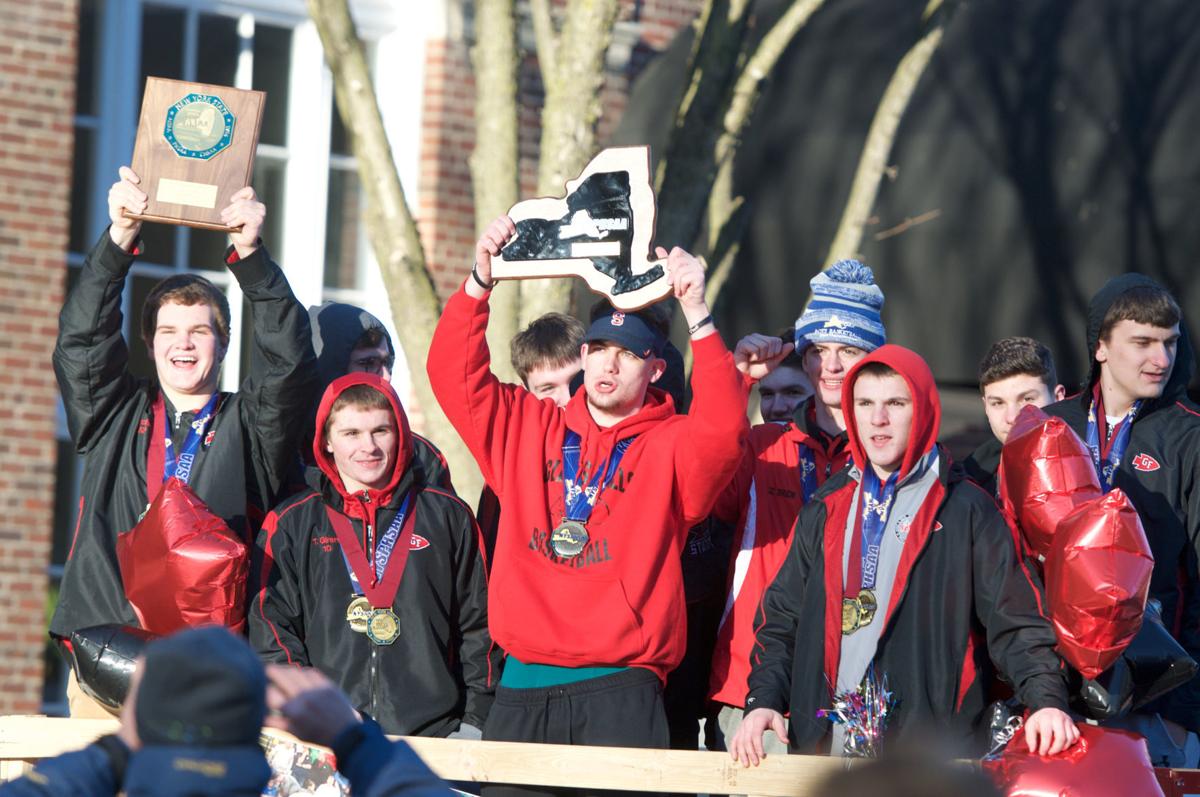 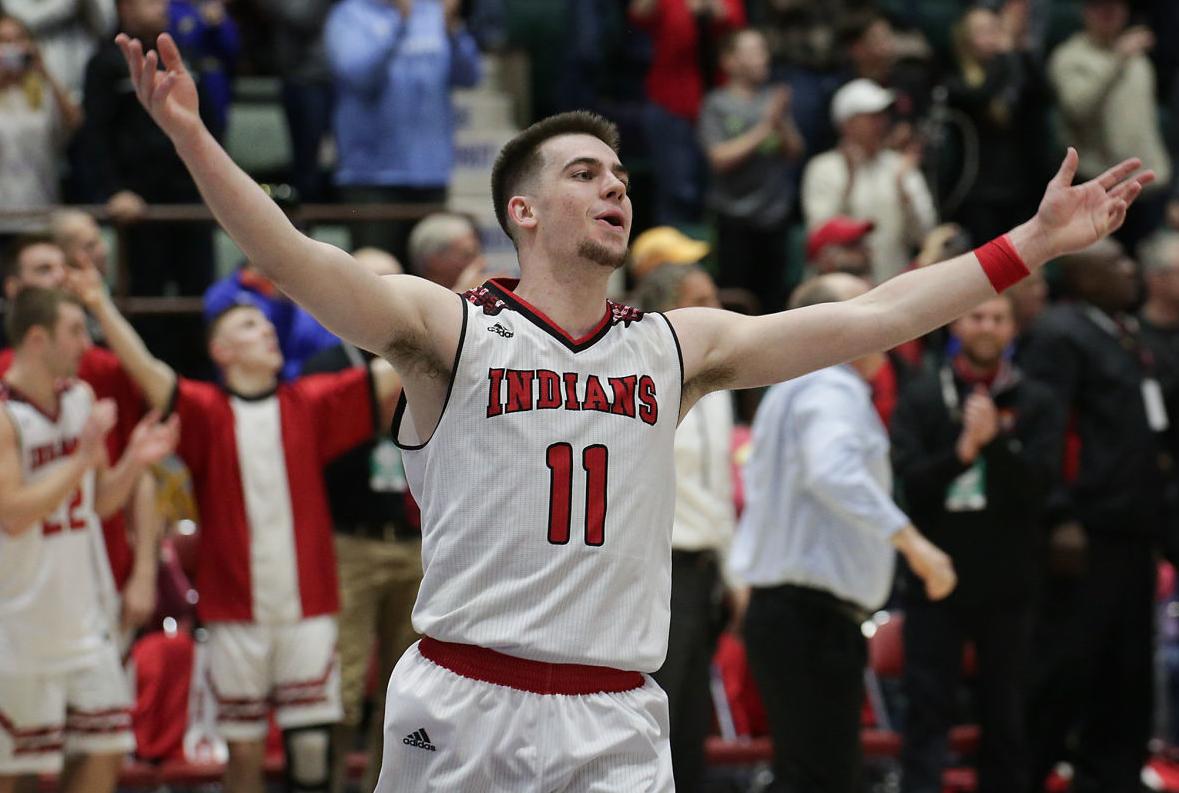 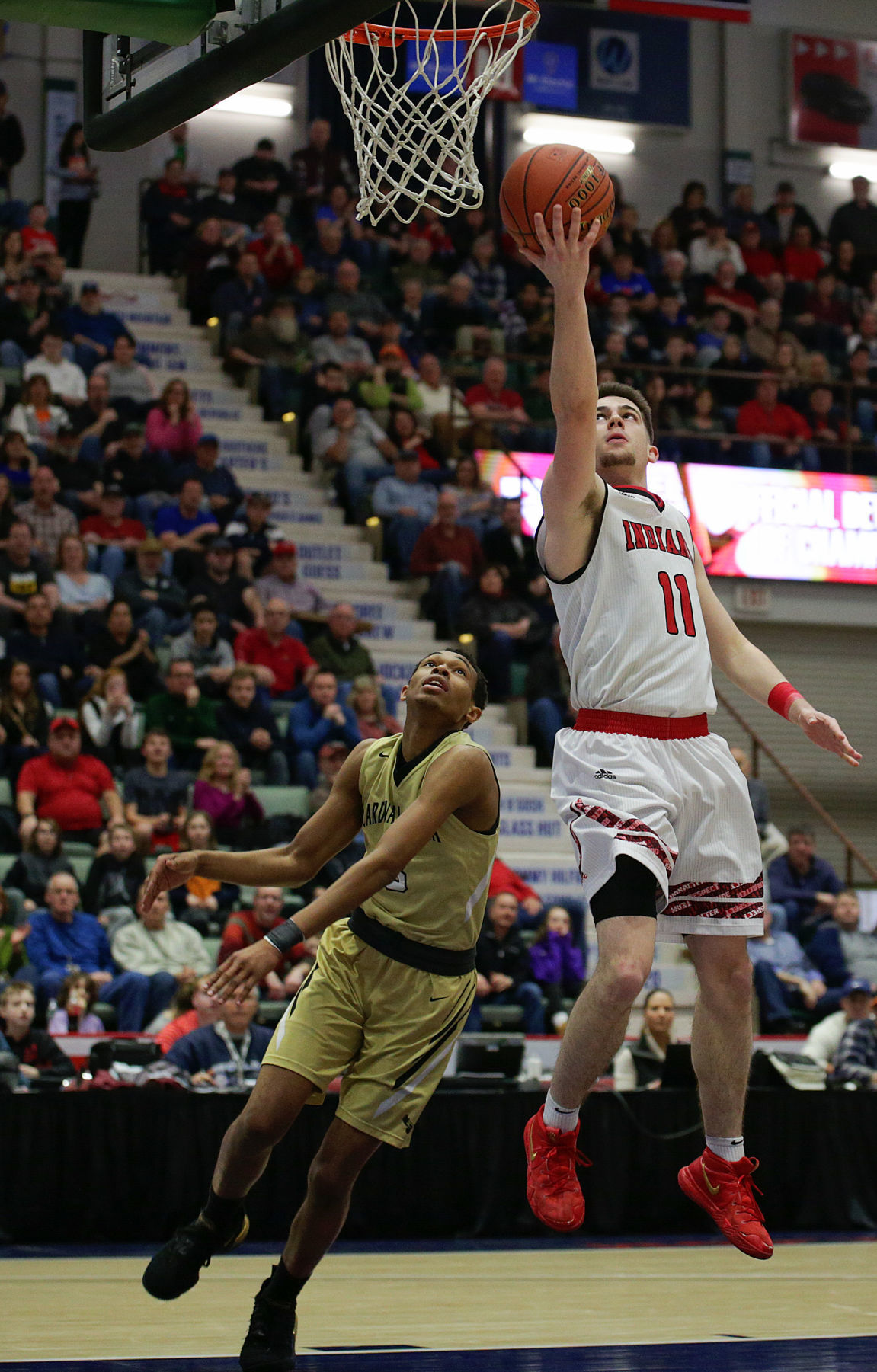 New York state’s all-time leading scorer, who led the Glens Falls basketball and football teams to state titles, has more time on his hands than he knows what to do with.

With his graduation looming, he waits patiently, soaking up the fleeting moments with friends and family that were often sacrificed for basketball years prior.

Once the busiest high schooler in the 518 — between workouts, AAU practices and media responsibilities, not to mention an attempt at a social life — Girard finally just gets to be a kid.

Since walking off the Cool Insuring Arena floor a champion in the Federation final, JG3’s AAU springs are behind him as he awaits enrolling at Syracuse in June.

It’s a late-spring afternoon and the Glens Falls YMCA is quiet.

A perfect time for Girard to swoop in.

He’s at peace in an empty gym. Far from the thousands that witnessed his final high school game. And a mass contrast from the likely 30,000-plus crowd he’ll play in front of at the Carrier Dome come Nov. 6, when the Orange open up against defending champion Virginia.

No screams, no signs and no GF Nation. Just JG3, soaking in his final few weeks in Glens Falls.

He’ll graduate on June 29 and move his life to Syracuse the very next day.

“Because I’m in National Honors Society and have a study hall as my last class of the day, I am able to get out of school early,” Girard III said. “I leave about an hour or an hour and a half early and come right here to the Y.

“Whether I’m doing something that night or going to a softball game later or something, I always make sure I get here during that time for about two hours. Then about two or three times a week, I’m playing at the park running fives with my friends or doing the same at (SUNY Adirondack).”

So, to no one’s surprise, that is where he is. Whether it’s shooting by himself, organizing pick-up or hooping with whoever is at Crandall Park, Girard cannot stop balling.

“Believe it or not, this is still getting me ready for the next level,” Girard said. “My dad wouldn’t let me waste my time here playing with bums. It’s good basketball around here and like always I am going to come to compete.”

“It’s funny. I was playing two-on-two with some friends recently and we got down 3-0 in a series, and I was heated, to say the least,” Girard said. “So we came back, and I scored 21 points in four straight games. My (friend) loved it cause he sparked that (competitiveness) in me. I do not come here to lose.”

Girard plays smart because adding a new injury to the already CVS receipt-length list he carried by senior year’s end is not an option.

From football, he sprained his AC joint early. Then against Burnt Hills, he bruised his ribs as he was coughing up blood after one hit forced him to stay down for a while.

With only a weekend of rest between winning the state football championship and starting basketball, he never fully healed.

His left shoulder shows permanent deformity with a small asymmetrical bump on his deltoid.

Then in the state basketball semifinals, he rolled his ankle, worse than he ever had before. By game’s end, his ankle was the size of a baseball.

Glens Falls coaches and trainers helped him rehab as best they could inside a standard hotel room. The Indians went on to win the state championship on a game-winning shot as time expired.

It was the No. 7 top play on ESPN’s SportsCenter, and he scored 50 points that night, on a busted ankle. Doctors later said he tore five ligaments in his foot and likely should not have been playing.

“I knew I had to play,” Girard said. “Those were just some things I had to overcome and it was worth it. I wanted to be a part of this. There was nothing more I wanted to do than be a state champion in football and basketball.

“Seeing yourself on SportsCenter Top 10 is awesome. I woke up that morning on Twitter and saw the play had a little number seven by it. That is stuff you dream of as a kid and hopefully, there will be more SportsCenter moments with Syracuse.”

That is his grit and by-any-means-necessary mentality. He isn’t making excuses, rather reflecting on his career as his last weeks as a high school student tick away.

“Playing the defending champions opening night is going to be wild,” he said. “There will be 30,000 plus there and I cannot wait. Being a champion here in Glens Falls, I learned that to be the best, you got to beat the best. We were counted out and I’ve seen Syracuse be counted out in the past. I’m ready for (Virginia). There is no better way to open the year.”

Between rehabs and workouts, there is still plenty of time for Girard to enjoy youth.

He finally attended the prom and even was in his high school’s musical, though he knows his basketball skills don’t quite translate vocally.

He is going to all the spring sporting events he can, cheering on his classmates as they did him and his squad for seven straight months.

By night and as always, he watches all the basketball he can, which means late evenings studying the NBA playoffs.

There have been two series-ending-buzzer-beating shots thus far. First Portland’s Dame Lillard hit a 37-foot three-point to eliminate Oklahoma City in the opening round, then Kawhi Leonard nailed a fade-away from the right corner, pushing Toronto to the conference finals.

“Kawhi’s play was more difficult but the shot I would take would be Dame’s,” Girard said. “That is 40 feet with someone in your face. People think that it is just lucky but in reality, I wouldn’t just pull up from 40 if I didn’t practice it and I know it’s the same for them because you have to practice shots like that to be ready for those moments.”

This month when then Michigan coach John Beilein announced he was going to the NBA to be the head coach of the Cleveland Cavaliers, Girard was shocked. But it also put everything in perspective for him.

“I told my dad the other day that this is God’s plan,” he said. “Like with coach Beilein going to the NBA, thank God I didn’t pick Michigan. Oshae Brissett declared for the NBA so I’ll get to wear number 11. Both those are a reassurance that I made the right decision and I know I did.”

On to the next

JG3, only 18, is still too young to consider legacy, but accomplishing what he did accelerated his aging process and matured him.

Pouring all he did into this city, he wants to be remembered for what he accomplished on the court and the young man he was off it.

Soon it’ll be over and Girard won’t have much time to celebrate.

When Glens Falls Class of 2019 graduates, JG3 will walk across the stage on June 29 and leave for Syracuse a day later.

But just the way he gracefully slid through the air for that game-winning state championship shot, Girard never lost the balance between who Joseph was before JG3.

Such authenticity will follow him to Syracuse, and luckily for everyone here, he isn’t moving too far.

“It is going to be crazy,” Girard said of his upcoming graduation day. “I have not cried since freshman year when my grandfather died. So if I see someone start to tear up, my friends, coach Rob, my mom or dad, then it is going to be hard.

“My time here is coming to an end,” he added. “But (my loved ones) know that their time with me is going to be forever.”

A trio of Girards honored with postseason awards

Not only did Joseph Girard III repeat as the New York State Sportswriter Association Class B player of the year, but he had a few familiar fac…

The accolades from Glens Falls Joseph Girard III senior season on the gridiron and the hardwood continues.