Become a Member
Read Today's E-edition
Share This
Season Preview: Thunder ready to hit the ice after a year off
0 comments
Share this

Or getting hit. At least by someone other than a teammate in practice.

“Not that I’m a real physical player, but I think that gets you involved in the game,” the veteran Adirondack Thunder forward and team captain said. “If you’re not playing well and you go hit somebody, you get an adrenaline rush, and vice versa.”

That adrenaline rush returns Saturday as MacArthur and his Thunder teammates hit the ice for real — finally, after 19 months away from hockey at Cool Insuring Arena.

Fans will be back in the seats at Cool Insuring Arena

Adirondack opens the ECHL season at 7 p.m. against the Newfoundland Growlers in front of what is expected to be a near-capacity crowd.

“I can’t wait to step out and see everyone in the stands, it’s been way too long,” Loh added.

The Thunder last played a regular-season game at Cool Insuring Arena on March 10, 2020. When they take the ice again for Saturday night’s ECHL opener, it will have been 592 days since the team last played. Their 2020-21 season was canceled by the coronavirus pandemic restrictions on travel and large gatherings.

Several Adirondack players did not play at all last season, a gap of a year and a half before starting practice in Glens Falls on Oct. 11.

Conditioning has been a primary concern in training camp.

“We’ve done a little bit more trying to make sure guys’ lungs and legs are ready to go,” said Loh, who is assisted by Peter Dineen. “There’s nothing like game play, so for some of these guys who haven’t played for 18 months or whatever, you need an opportunity to get your legs back underneath you.”

“Trying to stay mentally sharp and not drain yourself has been the hardest thing for most of us,” MacArthur said.

Adirondack played a pair of preseason games last weekend against the Reading Royals, losing by scores of 4-0 and 4-2.

“The preseason games didn’t go our way on the scoreboard,” said forward Robbie Payne, who played for the Thunder in 2019-20 and was out of hockey last year, “but the things we were working on throughout those games and different systems we were running all went really well.”

“We’re not a real east-west team, we want to get into the offensive zone in a hurry, and obviously if there’s a play to be made, we make it,” he said. “If not, we’re not going to try to make something happen out of nothing, keep it a pretty simple game. Don’t make it harder than it needs to be.”

MacArthur, now 36 and the elder statesman in his third stint with Adirondack, said he likes the mix of youth and experience on the team.

“But it’s a very respectful group, a very hard-working, competitive group,” MacArthur added. “I think we’re going to win by committee. We’re a very fast team — so we should be fun to watch.”

A couple of players expected to sign with the Thunder this season — former Adirondack Phantoms center Rob Bordson and defenseman Charlie Curti, who played for the Thunder in 2019-20 — opted to play in Europe.

“You’re still trying to build the same team, so you’re just going to try to find guys that can fill the role that those guys left,” Loh said.

Mareks Mitens had been penciled in as the Thunder’s opening-night starter in goal, but he was called up to the AHL’s Utica Comets on Wednesday night.

So Alex Sakellaropoulos, the Union College product who played for the Thunder in 2018-19, will start between the pipes Saturday. He went 19-6-5 with a 2.51 goals-against average for Adirondack that season.

The Thunder signed Brandon Kasel, a 2020 Skidmore College graduate, to back him up.

The Thunder’s defense will be led by returning veteran Blake Thompson and newcomer Jake Ryczek. Thompson is back for his fourth season with the team, while Ryczek played for the Indy Fuel two seasons ago. Neither played last season.

“(Thompson) keeps it simple, steady, he defends well, he’s just a good all-around defenseman,” Loh said. “Jake Ryczek really reminds me of Desmond Bergin from a few years back. He’s a little bit more dynamic, he can make a play and I think that’s going to help.”

“I think our defense is pretty deep, I’ve been very pleased with what we’ve seen so far,” Loh said.

With Rob Bordson playing in Norway, Loh said the Thunder would take a “center by committee” approach — “You’re not replacing Bordson with one guy,” Loh said — to the key position.

Adirondack has Tyler Irvine down from Utica, veteran Colin Long back after several years in Europe, and Jordan Kaplan centering lines.

“(Irvine’s) sort of taken the reins on that first-line center role,” Loh said. “He played with the Devils’ American league team (in Binghamton) last year. You can tell he has some pro upside, for sure.

“Colin Long is excellent — he’s a veteran guy, he’s been over in Europe for a little while, so he’s readjusting, but you can certainly see how skilled he is and he’ll have an impact. And Jordan Kaplan has done a great job of digging into that third-line role.”

Loh said he will be experimenting with lines for the first few games, and they can build around MacArthur and Payne, who was an ECHL All-Star two seasons ago.

MacArthur brings a great veteran presence, energy and skill to the front line.

“He certainly has a lot of offensive ability and he plays the game really well, but he brings the energy,” Loh said. “He’s just as excited today as he was five, six years ago when we first met him. He loves the game more than anybody I’ve ever met.”

Loh also likes how rookie Patrick Grasso, a dynamic University of New Hampshire product, has looked coming down from Utica.

Veteran Shane Harper, a former Adirondack Phantom, is back from a stint in Europe but is currently out with an injury.

“I like our group a lot. Our forwards are really excellent, our D is solid,” Loh said. “If you look at our forward group, it’s pretty skilled, they should do a good job of getting the offense we need, and for the D it’s just a matter of them doing the little things right and helping keep the puck out of our net.”

Home games in all CAPS

The skinny: While the Thunder are opening their season tonight, the Growlers will be playing their third game in three nights.

Newfoundland scored twice in the second period and beat the Adirondack Thunder 3-2 in the season opener on Saturday night.

Thunder take on Worcester at home

The Adirondack Thunder host Worcester on Wednesday night in their second game of the season at Cool Insuring Arena. Game time is 7 p.m.

The Thunder scored three power-play goals in a 6-2 win over Worcester on Wednesday, their first victory of the 2021-22 season.

James Henry returns to Glens Falls ... on the opposing bench

James Henry will be back in Glens Falls on Saturday night, but not on the Adirondack Thunder bench.

Noel Hoefenmayer scored a pair of goals as the Newfoundland Growlers beat the Adirondack Thunder 4-1 on Friday night.

The Adirondack Thunder scored three times in the first period and went on to beat Newfoundland 6-4 for their first road win of the ECHL season.

Newfoundland goalie Keith Petruzzelli stopped all 27 shots he saw as the Growlers beat the Adirondack Thunder 5-0 on Sunday.

The Adirondack Thunder are on the road for a three-game set in Boise, Idaho.

The Adirondack Thunder are scheduled to host the Reading Royals on Friday at 7 p.m. in an ECHL preseason game at Cool Insuring Arena.

GLENS FALLS — Day 1 of Adirondack Thunder camp looked the same as any other hockey practice. 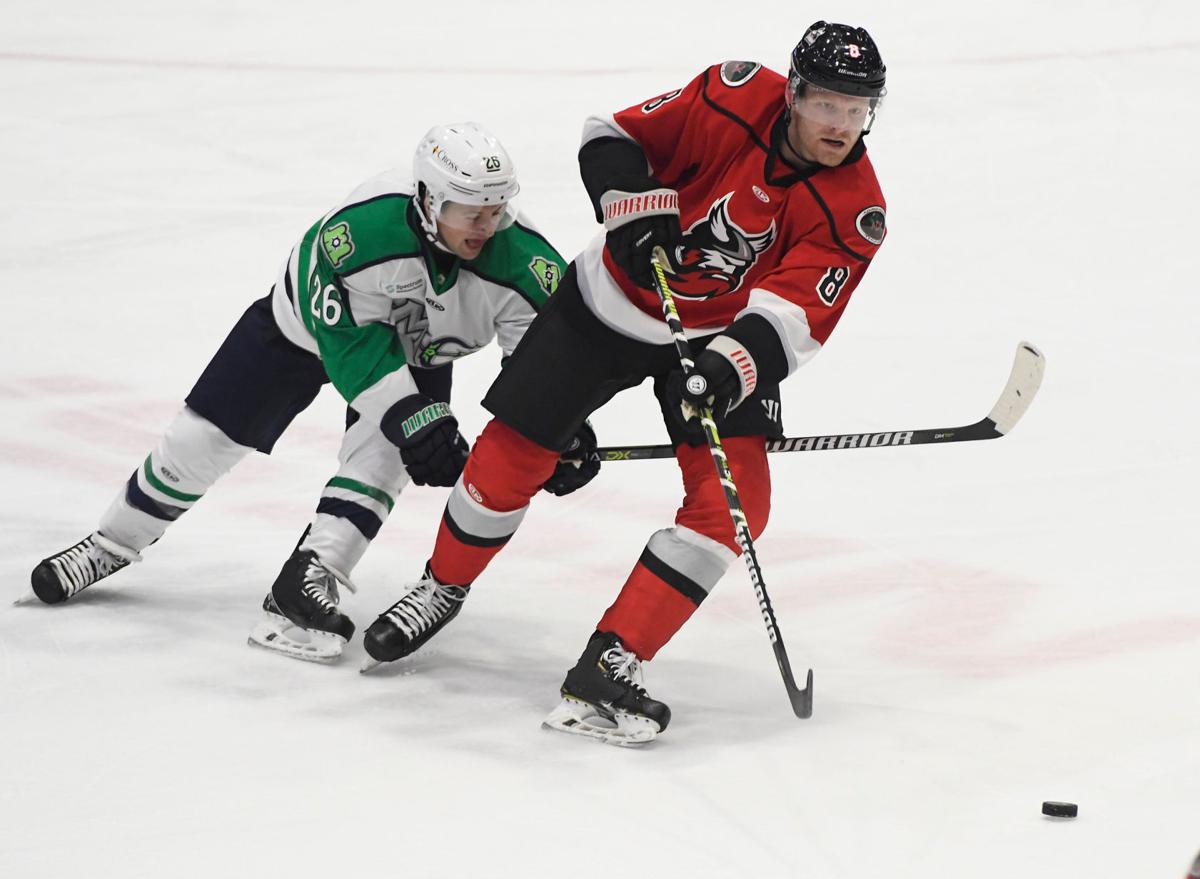 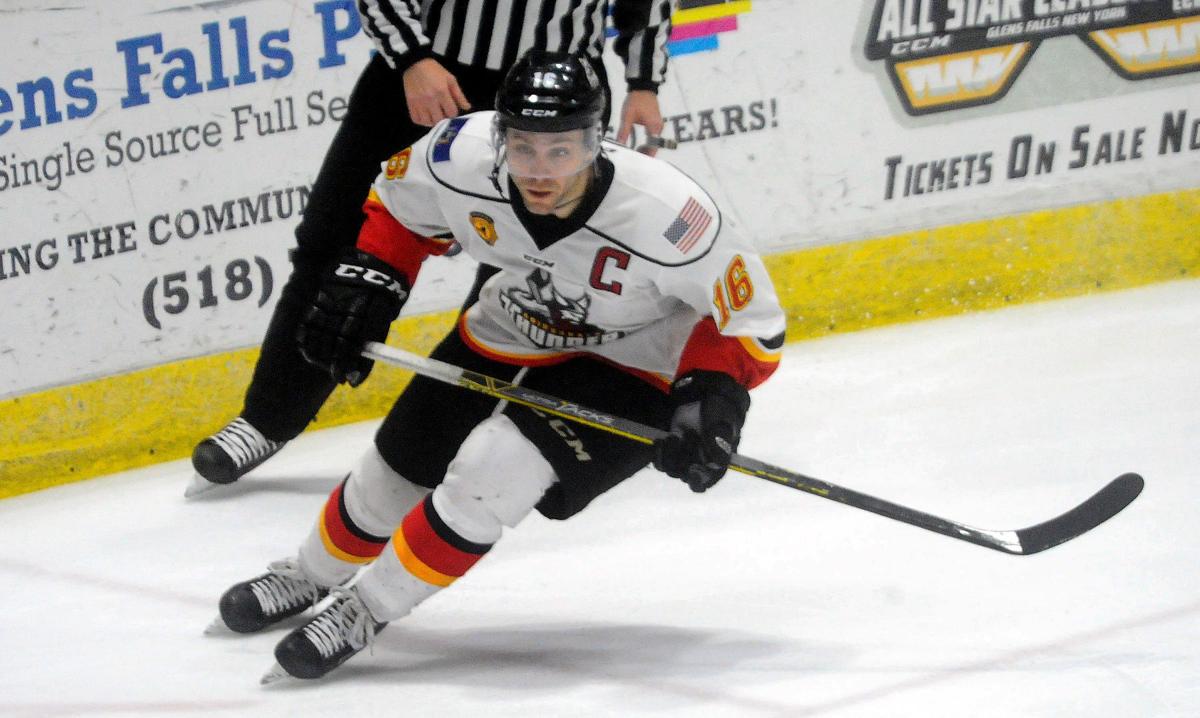 Pete MacArthur, shown in action during a 2017 game in Glens Falls, has been named the team captain for the Adirondack Thunder this season. The Thunder open the 2021-22 ECHL season Saturday at 7 p.m. against the Newfoundland Growlers at Cool Insuring Arena. 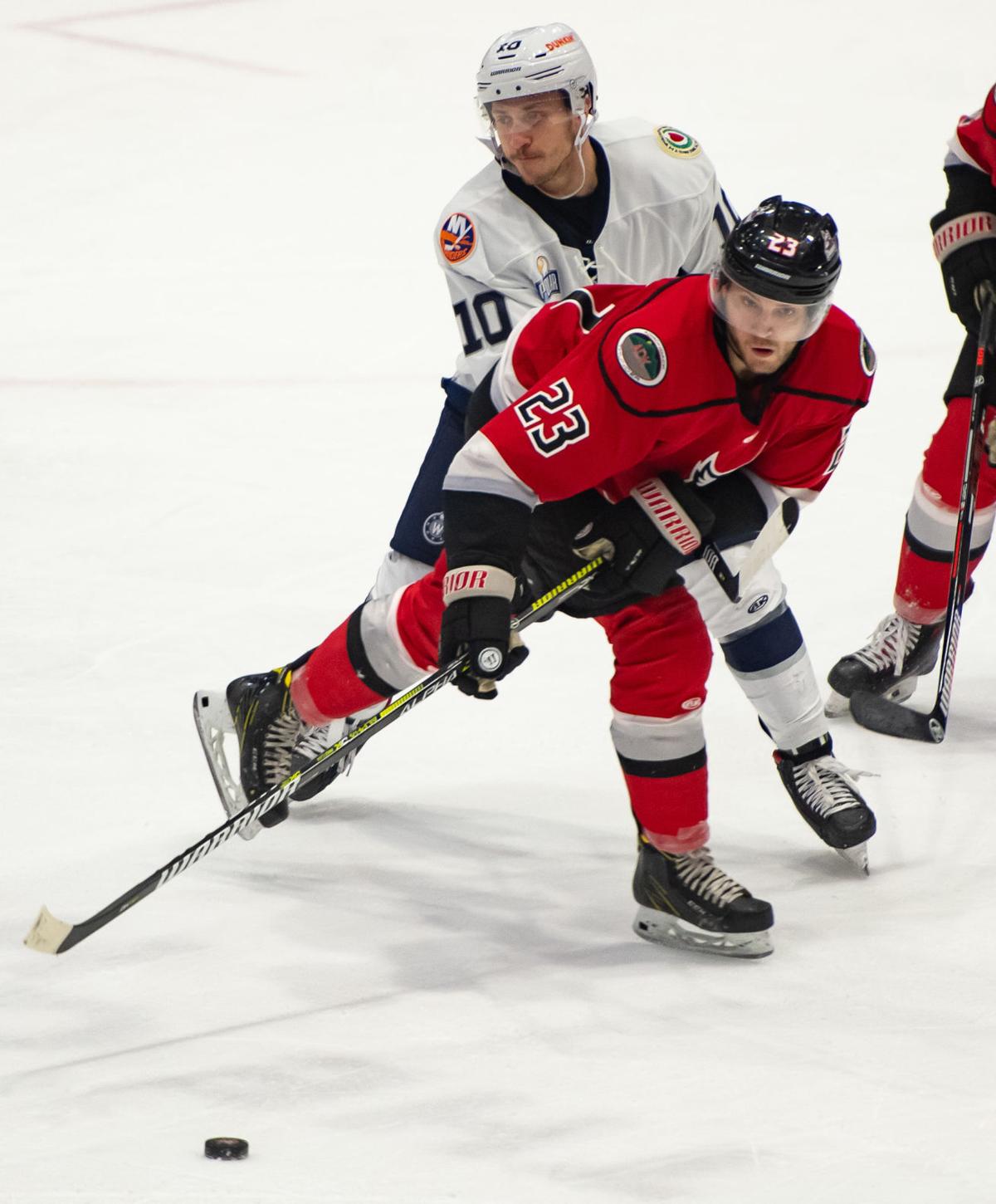 Forward Robbie Payne, front, returns to the Adirondack Thunder this year after an ECHL All-Star season in 2019-20. The Thunder open the season Saturday night at Cool Insuring Arena.