After finishing dead last in the ECHL this season, the Adirondack Thunder’s decision to part ways with Alex Loh on Wednesday probably came as little surprise.

Loh was in the final year of his contract as head coach and Director of Hockey Operations.

The Thunder recently completed a 27-40-4-0 season — a league-worst .408 winning percentage — and missed the playoffs for the first time since relocating to Glens Falls.

“The bottom line is we didn’t win enough games the last two seasons, and we felt we needed a new voice as head coach going forward,” said Jeff Mead, the Thunder’s team president and general manager. “That’s the only reason — Alex is certainly a professional and he represented the team and the organization well. We just didn’t win enough games.”

Loh, whose final record with the team is 86-94-18-8, was hired as an assistant coach under former head coach Cail MacLean in 2015-16, the Thunder’s inaugural season in Glens Falls. Loh was named head coach before the 2018-19 season, leading Adirondack to a second-place finish in the North Division and a fourth straight trip to the Kelly Cup playoffs.

The Thunder went 22-28-8-5 in the pandemic-shortened 2019-20 season, and Loh stayed on in a front-office role through the 2020-21 opt-out year, which the team did not play because of COVID restrictions.

“We want to thank Alex for his commitment to the organization and his efforts,” the Thunder said in a Wednesday press release. “Alex has been a key piece of this team since its inception and has played a significant role in all our successes.”

The decision to part ways with Loh took more than three weeks from the end of the regular season, but Mead said that was by design.

“We’re set up a little differently than other hockey teams — we don’t have a sole owner, we have a board of directors, so it takes a little more time to make decisions,” Mead said. “We didn’t want to rush it. We stuck to our process and came to the conclusion to move on.”

Asked what Loh’s reaction was to his release, Mead said, “He’s a professional. It’s not easy news to hear, and it’s not easy news for us to deliver. He’s been with us since day one. … It was not a fun day for the Adirondack Thunder organization.”

A message left for Loh had not been returned at press time.

Mead said the process to hire a new head coach would begin immediately.

He declined to discuss specific coaching candidates, adding, “Anybody that wants to apply, we’ll accept a resume.”

Mead also did not speculate on a timeframe for hiring a new coach.

“We don’t want to put a timer on it — it could be a week, it could be a month,” he said. “There are a lot of teams in the ECHL playoffs right now. We want to find the right coach for our team for now and the future.”

The Adirondack Thunder will name their new head coach on Tuesday.

Pete MacArthur will take over as head coach of the Adirondack Thunder. 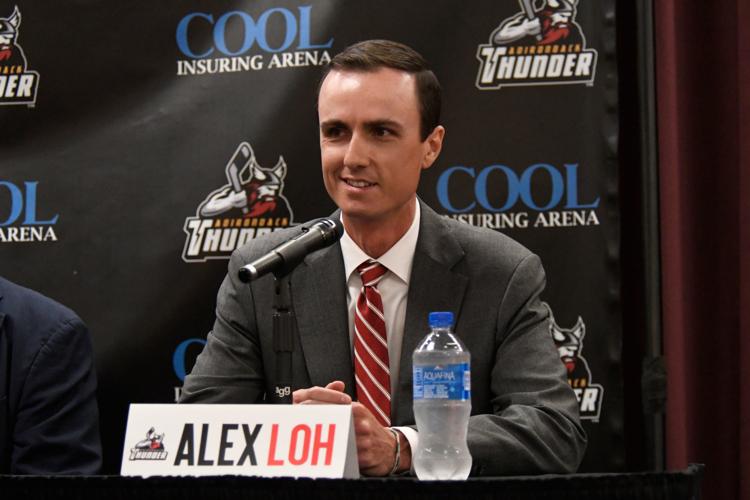 Alex Loh, shown at the press conference announcing his hiring as head coach of the Adirondack Thunder in 2018, was let go as coach on Wednesday. 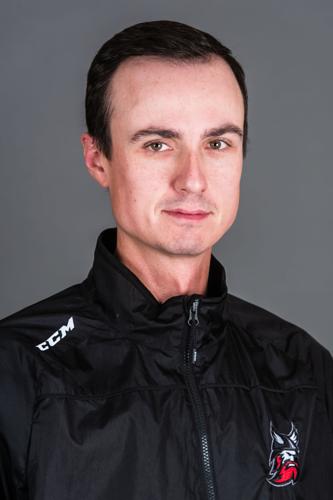