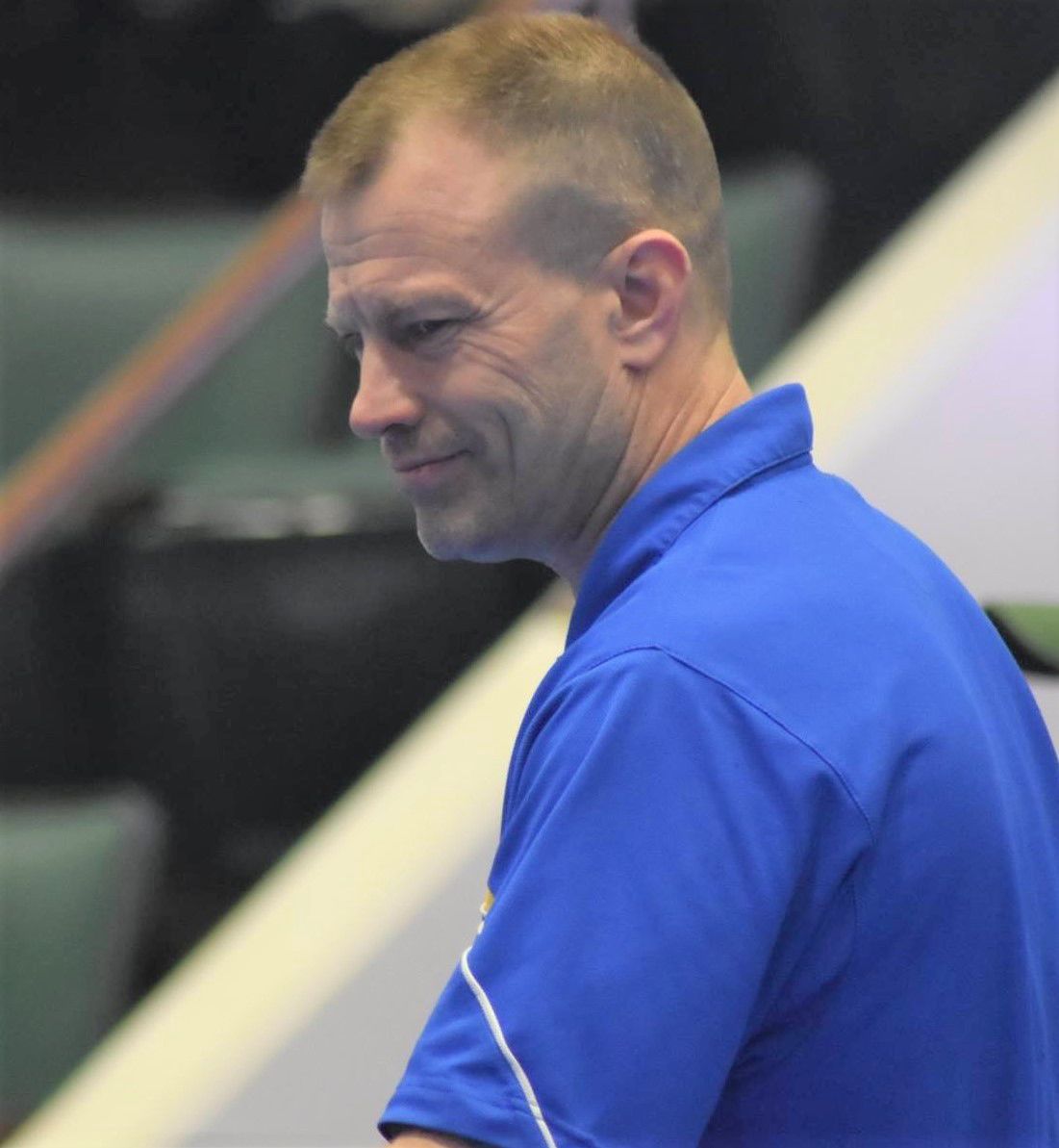 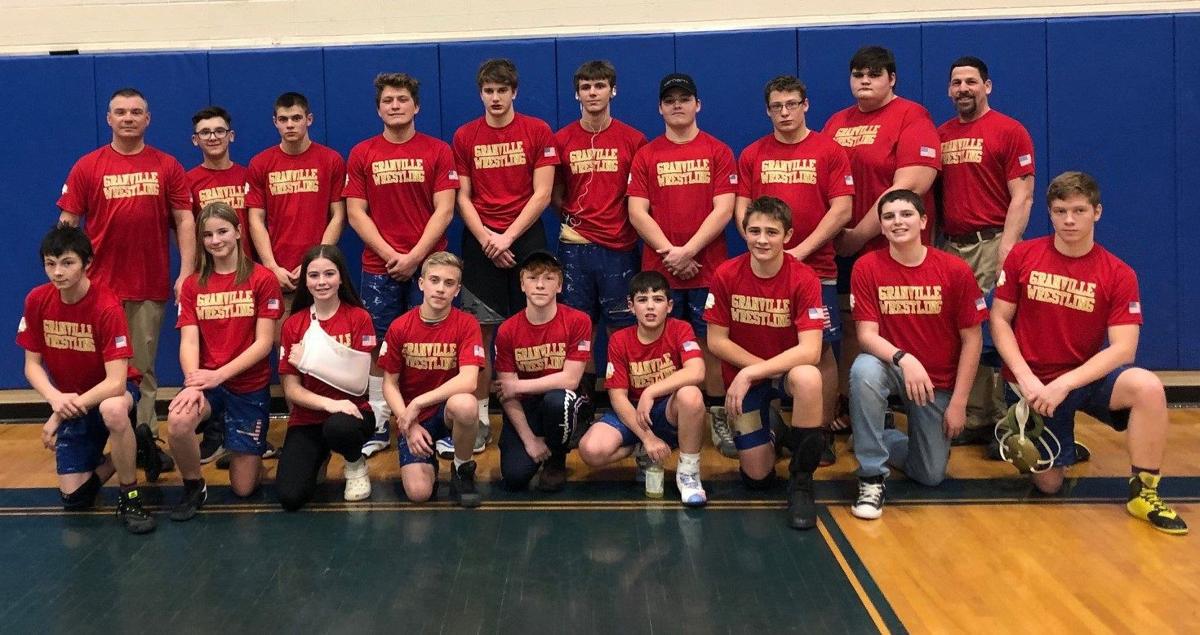 Members of the Granville wrestling team pose in their new red team shirts, which say "Remember Everyone Deployed" on the back. Assistant coaches T.J. Zovistoski, second row far left, and Ron Boisclair, second row far right, are running the team in place of head coach Steve Palmer, who has been deployed to Kuwait with his National Guard unit. 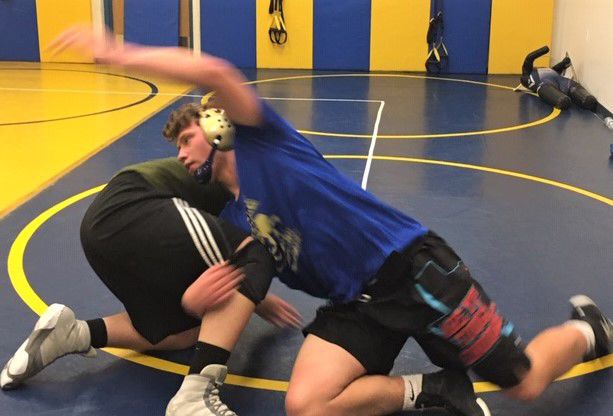 Granville wrestlers Logan Beebe, right, and Logan Knowles go through a drill during practice earlier this week at the high school. 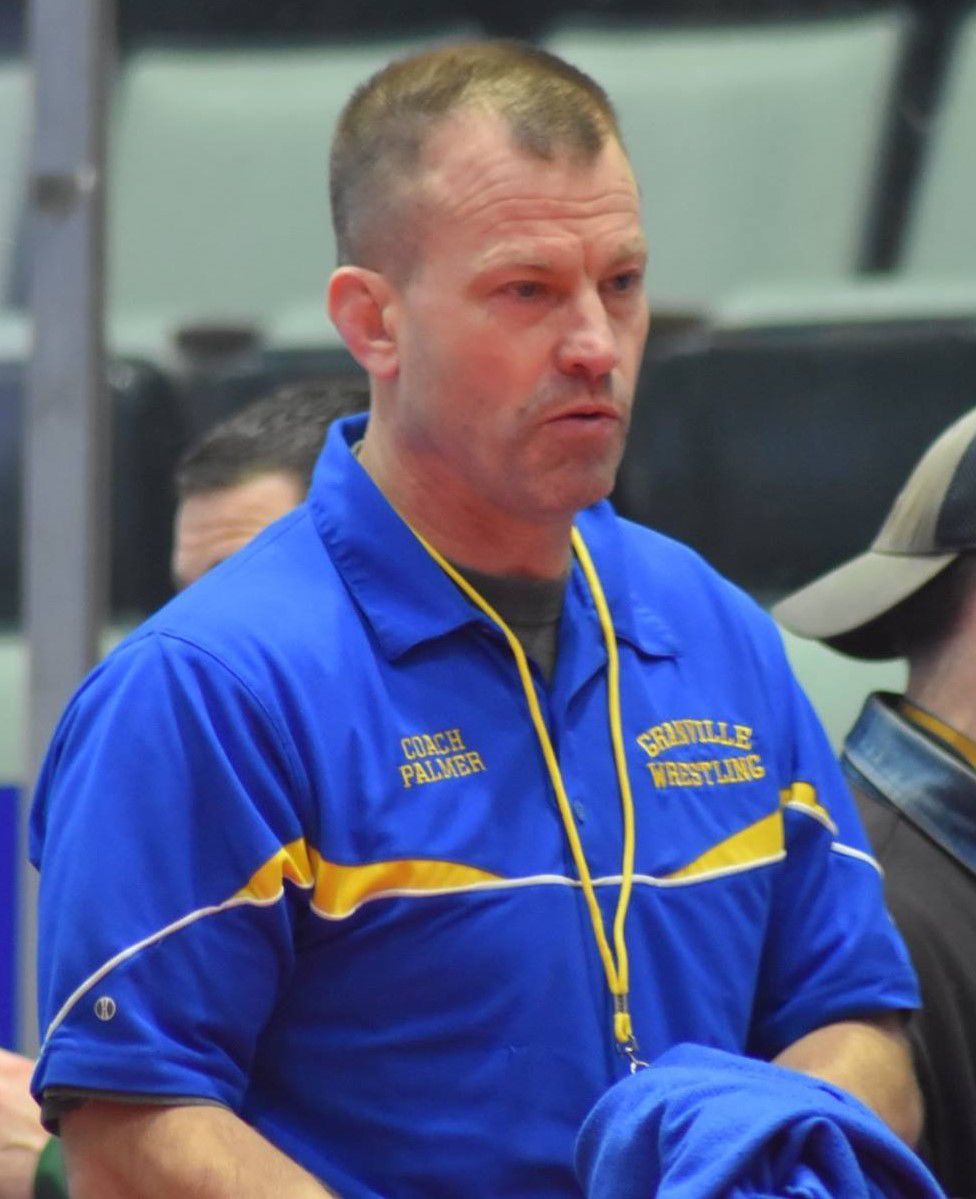 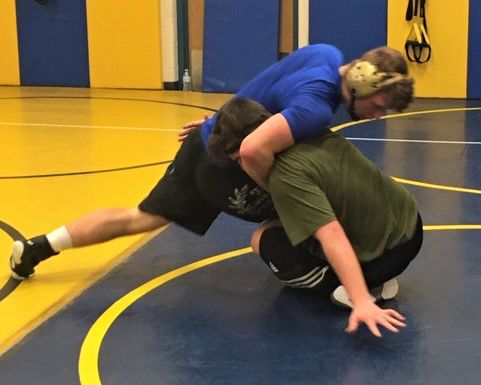 Granville wrestlers Logan Beebe, left, and Logan Knowles go through a drill during practice earlier this week at the high school.

The wrestlers still go through their conditioning workouts and drills, they still engage in one-on-one full-speed bouts — but there’s a missing voice and presence in the room.

Longtime wrestling coach and physical education teacher Steve Palmer is deploying to Kuwait with his New York National Guard unit, leaving his family, school and the team he has coached through the first half of the season.

“I’m thankful that he’s doing it for us, but I would like him to be here for my senior year,” said senior 160-pounder Ben Chilkott, who is out with an elbow injury suffered last week. “But he’s gotta do what he’s gotta do.”

“I personally am proud of him for it,” said senior Cole Haines, who wrestles at 170 for the Golden Horde. “He’s serving his country, he’s protecting all of us here.”

Palmer, a Sergeant Major and a medic in the Army National Guard, was given a sendoff ceremony by the school before Christmas break. His unit recently left for pre-deployment training.

The wrestling team also got red Granville Wrestling T-shirts with the words “Remember Everyone Deployed” on the back.

“They are what we stand for,” senior 285-pounder Tyler Muise said. “We’re really proud to be Americans and proud that he’s going over there.”

“There’s definitely a hole here in the room,” said Boisclair, a former Salem wrestler who is in his third season as an assistant. “Mr. Palmer is great, he’s done a lot of great things for the kids and me personally. We miss him this year — it’s a little different without him.”

“It’s kind of the same wrestling year, because he was here for half the year,” said Muise, who has wrestled with Palmer since he started in the pee-wee program 10 years ago. “It probably would have been different if he wasn’t here for the entire year.”

This is the second time Palmer has deployed during a season. He missed the entire 2006-07 wrestling season while deployed to Iraq with the 466th Area Support Medical Company, primarily in a supervisory role. Palmer, 51, has been a member of the Army National Guard since the late 1980s.

Palmer said he could not comment on his unit’s mission because of Department of Defense regulations.

Former Granville wrestler Andrew Winchell, who was coached by Palmer the last time he deployed, is also deployed with Palmer’s unit this time.

Zovistoski and the wrestlers said Palmer would be back in the fall after a 10-month deployment.

“Him being a vet and continuing to serve over and over again speaks very highly of him,” said Zovistoski, a former Granville wrestler himself who is in his first year as an assistant coach and school resource officer. “Being able to step in and work with these kids the way he has is amazing, and all we can do is continue to look at how he did things and try to do things the same way. We have big shoes to fill.”

With a lot of underclassmen on a young team, Palmer’s example has been a positive for seniors like Haines. His absence has helped them grow as leaders.

“What he’s doing is really inspiring, what he’s done here, and now that he’s overseas, it’s kind of given me more determination to do what I can to help out while he’s not here,” Haines said. “I’m just trying to pass down what he taught to me. A lot of the stuff he taught me was moves, how to deal with certain situations.”

“He teaches not only throws and stuff, which are emergency moves, but he teaches a wider range of moves — from the fireman’s (carry) to a single-leg (takedown) — that can be used every match,” Muise said of Palmer, who is in his 20th season at Granville’s helm.

The last time Palmer deployed, he was unable to coach his team, so he worked with former Granville wrestler Ben Cosey, who was in the Navy, to create videos of moves for his wrestlers to practice.

This time, however, Palmer had a half of a season to lay the foundation for his team. It’s up to the wrestlers to finish the season strong.

“He taught us everything we needed, so now we’re just working on getting in the flow of wrestling and getting the conditioning up,” Chilkott said.

“We really can’t teach them any more than Mr. Palmer taught them,” Boisclair said. “Now it’s just fundamentals and keeping them going, because we’ve already been through it, we’ve had a half a season. We’re just kind of taking his lead with them, and the kids have been great, we have a good group of kids.”

“All we’re trying to do is get them through the rest of the year, and start up next year for him before he returns,” Zovistoski said.

With the recent tensions and threats between the U.S. and Iran, the wrestlers and coaches are understandably concerned, but focusing on wrestling helps.

“It’s hard on the kids, they really took him to heart,” Boisclair said. “They were kind of quiet last week. They’re coming back around, they’re figuring out me and T.J., too. Mr. Palmer is going to be very well missed, he’s an excellent coach.”

Queensbury put away the Foothills Council wrestling title on Wednesday with a victory over Amsterdam.

Salem-Cambridge pulled away to a 60-22 Adirondack League victory at Granville on Wednesday.

Whitehall and Queensbury finished second in wrestling tournaments over the weekend.

Members of the Granville wrestling team pose in their new red team shirts, which say "Remember Everyone Deployed" on the back. Assistant coaches T.J. Zovistoski, second row far left, and Ron Boisclair, second row far right, are running the team in place of head coach Steve Palmer, who has been deployed to Kuwait with his National Guard unit.

Granville wrestlers Logan Beebe, right, and Logan Knowles go through a drill during practice earlier this week at the high school.

Granville wrestlers Logan Beebe, left, and Logan Knowles go through a drill during practice earlier this week at the high school.