Become a Member
Read Today's E-edition
Share This
No pitch count in softball, but overuse injuries still a risk
0 comments
Share this
1 of 2 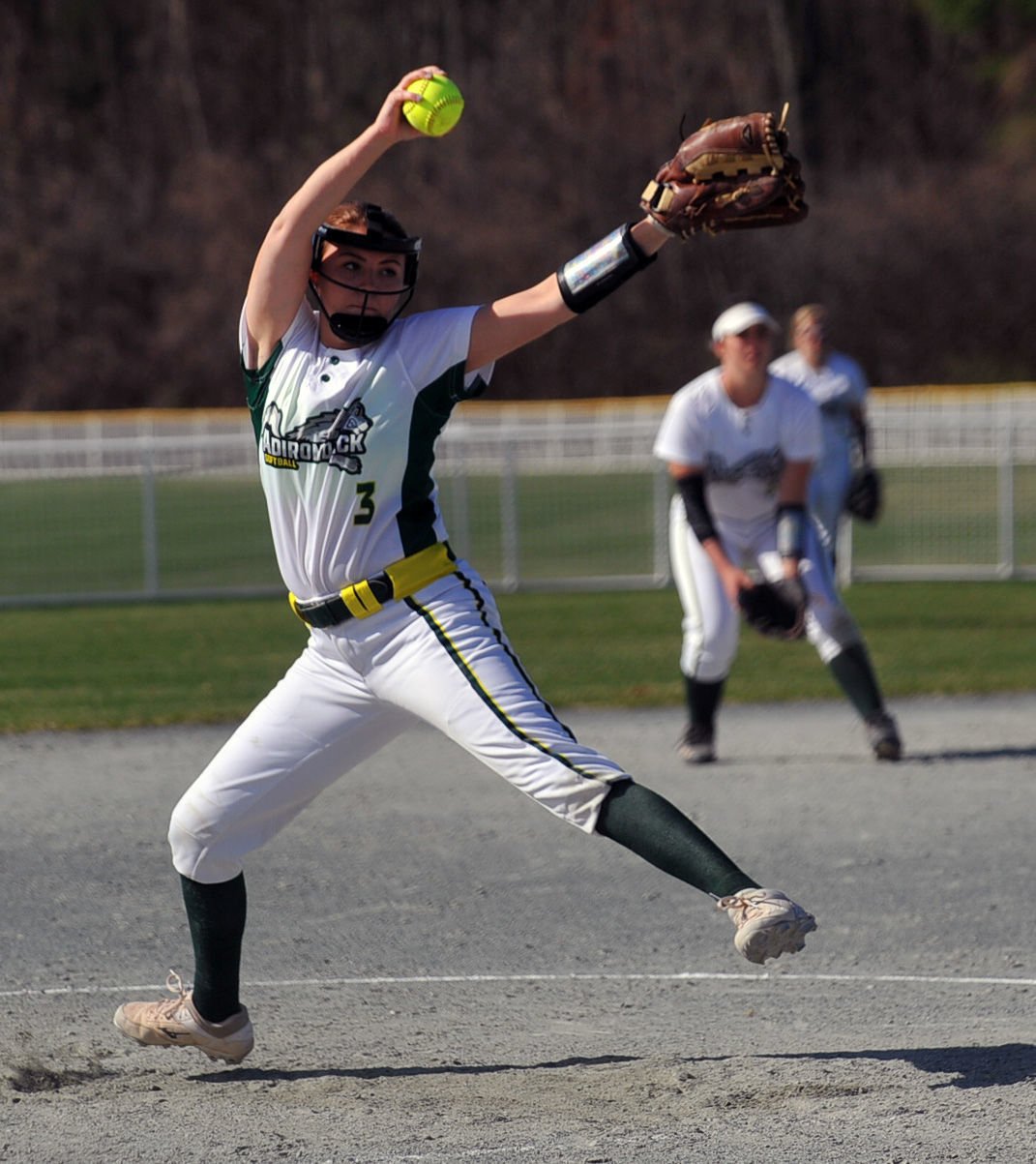 SUNY Adirondack pitcher Hannah Grady winds up to throw during the first game of Thursday's softball doubleheader against Columbia-Greene at Morse Athletic Complex. 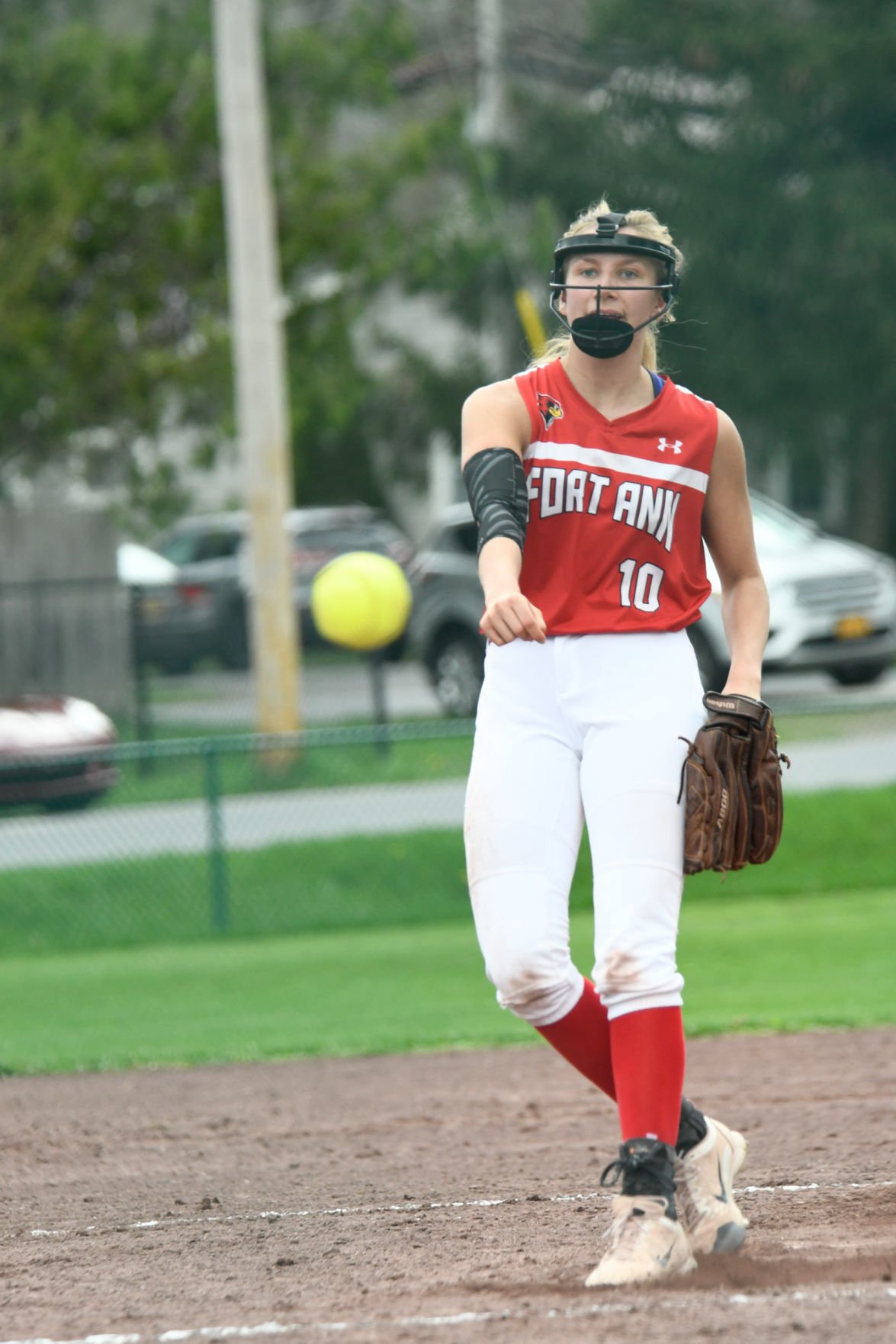 Kayla Bailey had no idea how many pitches she threw during the State Softball Tournament last year.

She pitched all 17 innings in a five-hour span as she led Fort Ann to the state Class D championship, including a 10-inning semifinal marathon.

Her father — who keeps a pitch count on his youngest of three children, all pitchers — told her she threw 289 pitches over two games. She struck out 21 batters and allowed five runs in that span, issuing only one walk in the title game.

“That was one of the most amazing performances I’ve ever seen,” Fort Ann softball coach Jason Humiston said. “We had such a quick turnaround after the first game. It looked like she was getting stronger as the games went on. She knew she was going the distance.”

“I had no idea I threw that many,” said Bailey, now a senior. “We played 17 innings, but it didn’t seem like that many. I was definitely sore after that, but throughout the year, I worked on conditioning my arm so I would be ready for games like that.”

A situation like that would never happen in baseball, not even before the New York State Public High School Athletic Association introduced a pitch count a couple of years ago. High school baseball pitchers can throw a maximum of 105 pitches in a regular-season game, 125 in the postseason.

High school softball has no such limit.

The mechanics of softball pitching — the underhand windmill motion — is seen as less stressful to the arm and shoulder than pitching a baseball overhand.

“Softball pitching is a very natural motion. You can throw as many pitches as you can,” said Jamie Graves Culligan, herself a former state champion pitcher from Fort Ann, who is now a pitching coach. “If you have the correct mechanics, you’re not going to hurt yourself. A lot of times, if a pitcher doesn’t have the proper mechanics, that’s when they’ll say their arm is sore.”

“It’s a natural movement of the socket,” said Brittney Sprague, a former Hudson Falls pitcher who is now the pitching coach for the SUNY Adirondack women’s softball team. “If you’re experiencing pain, you’re doing something wrong.”

State softball chair Cathy Allen said a pitch count for high school softball has not been brought up or even discussed at the state level. There has also been no call for a two-day state tournament, which baseball switched to a few years ago.

“No one’s brought it up from a committee standpoint,” said Allen, who added that some pitchers will rack up many more innings outside of high school competition, such as summer travel ball.

“Until someone brings it up as a concern, this is where we’re at,” she said. “We can only control what they’re doing on the high school level.”

Most high school softball teams have only one pitcher, two at most, so they will have a heavy workload each week during the season. How pitchers are handled is left up to the coaches.

“They’re the ones who know their players best,” said Allen, herself a former coach at Berne-Knox. “They see how she’s pitching — is she throwing correctly, is she complaining of pain, has she lost control, is she starting to show fatigue? You can see the speed and accuracy change dramatically.”

However, some concerns have been raised over how much pitching is too much for softball. While pitching in games may not stress a pitcher’s arm or shoulder joint, the repetition of practice can be taxing, leading to overuse.

In a 2016 journal published by the American College of Sports Medicine, Dr. Aaron Lear of Akron General Sports Medicine noted the most common injury among female softball players was to the shoulder. Lear cited several studies that followed injury trends in softball, noting a study of college pitchers showed “nearly 3/4 of the injuries reported were related to overuse, with the shoulder, elbow and upper arm being the most common sites for injury.”

The Michigan Surgery Specialists webpage “Softball Pitching Injuries (And How To Prevent Them)” noted the potential injuries as tendinitis, often in the rotator cuff, and tennis elbow, as well as tears in tendons, and cited overuse and poor mechanics as primary causes.

A 2017 study by the Washington University School of Medicine, noted in an abstract from the American Journal of Sports Medicine, tracked more than 100 female softball pitchers between the ages of 14 and 18 in high-level tournaments. The study showed “a progressive increase in shoulder fatigue, pain, and weakness over the course of 2- and 3-day tournaments without full recovery between consecutive days of pitching.”

The torque of the windup and whatever twist a pitcher applies to a pitch to make it move, drop or rise puts stress on the muscles and joints. Most injuries are not serious, but as with any repetitive motion — such as throwing hundreds of practice pitches without adequate conditioning or rest — the risk of injury becomes greater with overuse. The risk is also greater for young, developing pitchers who are still learning how to throw different pitches.

“A lot of times I see it more in the elbow and forearm than anything, because some pitching coaches and/or kids think they need to rush learning other pitches, and they’re not fully developed,” said Sprague, who also coaches youth and high school pitchers.

“Then you start throwing a changeup or a drop ball or anything that’s over-shoulder motion or rotating your elbow, a lot of times they just don’t have the muscle to hold all that together to throw certain pitches,” Sprague said. “A lot of times at a younger age you see that because of the technique they’re being taught, and their bodies just aren’t there yet.”

Pitching multiple games in a short span — many two-day travel softball tournaments feature three games per day — can cause fatigue, which could lead to poor mechanics and injury.

For softball pitchers, the keys to avoiding the injury risk are simple, as noted by the Michigan Surgery Specialists site: limit their pitch count, proper mechanics, warming up and strength training, and don’t push through pain.

SUNY Adirondack pitchers Bre MacDuff and Hannah Grady both said they have a cap on the number of pitches they throw in practice.

“I pretty much focus on 60-75 pitches a practice, so I don’t wear out my arm and then I’m ready for game time,” said MacDuff, a former Hudson Falls pitcher. “When I’m warming up for game time, I keep it really simple — I do what I have to do and then I get out.”

Bailey said she has never thought about a cutoff number, but she goes by how she feels.

“If I had to pitch Monday, Tuesday, Wednesday, then if I pitched in practice on Thursday, there’s a point where it’s too much,” said Bailey, who is Fort Ann’s only pitcher. “In travel ball, I’ll throw five games in two days, but I’m careful with my arm.”

“I tell a lot of my girls if they’re sore or fatigued in their shoulders, chest or back, they’re doing something wrong or they picked up bad habits,” Sprague said. “If you’re pitching correctly, you can pitch three or four games a week with no downtime.”

Having good mechanics is crucial to avoid injury. Poor mechanics force other muscles to compensate, increasing stress on joints. Pitchers like Culligan, Sprague and former Warrensburg standout Sara Rumrill learned from the master, Ray Hurley, who introduced windmill pitching to the Glens Falls area 30 years ago.

“Ray was big on knowing your body,” Rumrill said. “He taught me pitching with my eyes closed — any pitch you should be able to do without looking. It’s a repetitive motion.”

“My pitching coach in high school (Al Dudla) literally just made me sit there and do mechanics,” MacDuff said. “He didn’t focus on pitching, just the mechanics of my arm, pushing off, dragging, all that, hundreds of times.”

“Muscle memory is everything, so once you get in a groove, it’s hard to stay out of that,” Grady said. “You just have to keep yourself healthy, stretch, ice after pitching — you always have to ice. You can always (apply) heat before a game, but stretching is definitely important, too.”

Of course, the goal for all pitchers is to throw the fewest pitches possible — that means they’re in control and finding the strike zone.

“But you need to condition yourself to be ready to throw a lot of pitches,” Bailey said. “Just in case.”

NFL Week 6 Market: Will weather be a factor?

SUNY Adirondack pitcher Hannah Grady winds up to throw during the first game of Thursday's softball doubleheader against Columbia-Greene at Morse Athletic Complex.