Fort Ann players and coaches hold up their patches after winning the Class D title of the Section II Softball Tournament on Tuesday at Moreau Rec. 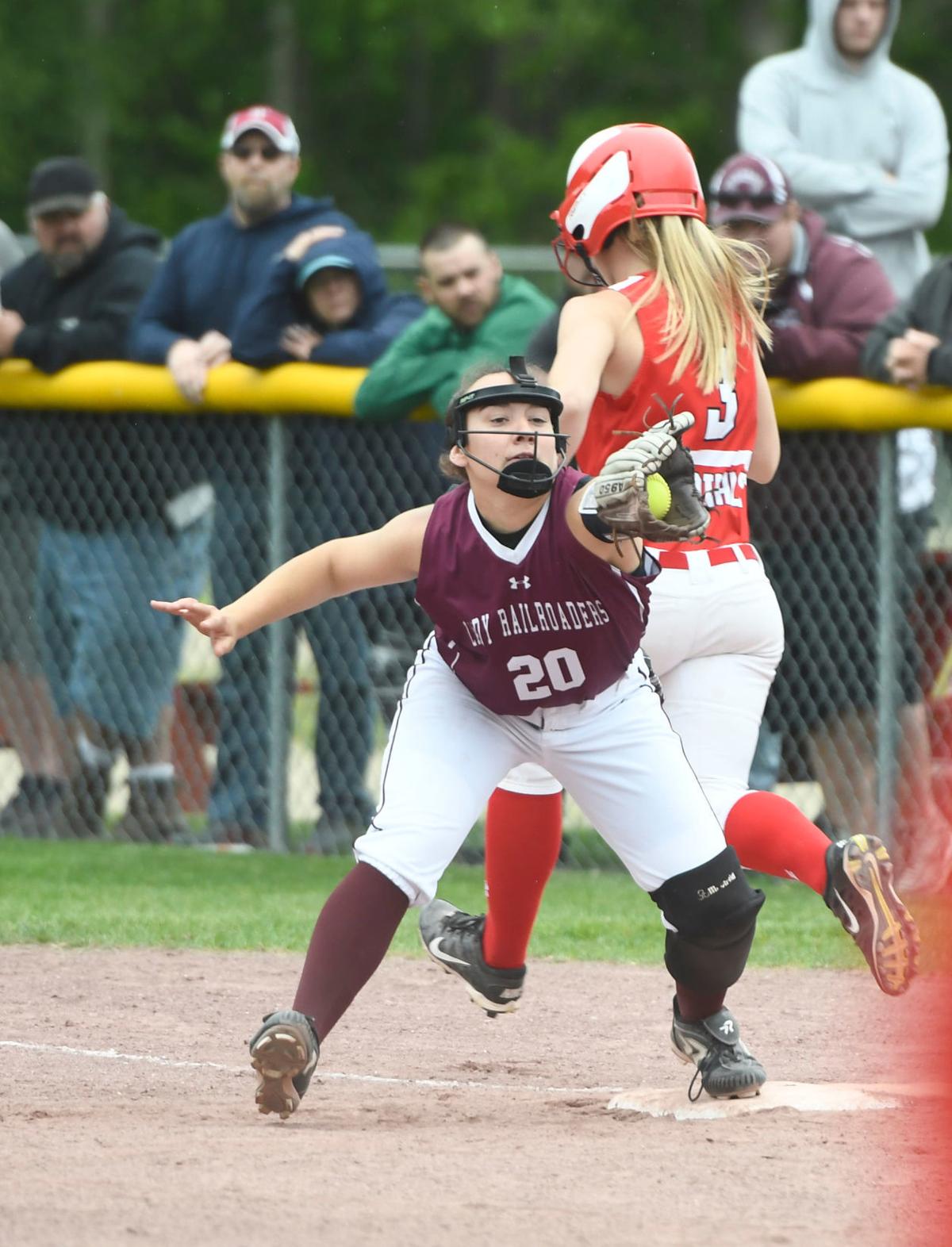 MOREAU — Something about the Section II Softball Tournament and Moreau Rec seems to bring out the best in Fort Ann.

Mixing small-ball, timely hits and solid defense Tuesday, the Cardinals extended their record streak of Class D titles to nine in a row with a 5-2 victory over previously unbeaten Whitehall.

“When you’ve got sectionals on the line, you don’t want to play this team,” Fort Ann coach Jason Humiston said of his Cardinals. “Kayla Bailey is a beast on the mound. We tried some things that we haven’t done all year. ... You couldn’t have written it any better.”

The Cardinals (13-6), ranked fourth in the state, advance to face Section VII champ Crown Point in the regionals on Friday at 4:30 p.m. at Moreau Rec.

Fort Ann found a way to get to Whitehall pitcher Madi Gould, the eighth-grade standout who had led the No. 2-ranked Railroaders to a 14-0 record heading into Tuesday. The Cardinals got nine hits, mostly on bunts, and struck out only six times.

“We drag-bunted five times from the left side, and I think we got infield hits on all of them. We haven’t done that in a game all year,” Humiston said. “We wanted to be aggressive and force the issue. We bunted with two strikes. It’s risk-reward, and I’ve got to trust my kids. They came through.”

“After last game, we knew we could hit her,” junior shortstop Sarah Paige said. “We had to go into the box with confidence, and we cranked up our pitching machine to 70 (mph) this week.”

Fort Ann jumped out to a 3-0 lead in the first inning after leading off with two walks. Bailey followed with her triple, then scored on Becky Ostrander’s bunt single.

“We knew we had to put pressure on them, so our game plan was to score early,” said Bailey, who had seven strikeouts and no walks. “I don’t think they’ve been behind in a game this year — we wanted to see how they would react.”

“I didn’t think we’d get three runs in an inning, as dominant as Madi has been this year,” Humiston said.

In the fourth, the Cards added an RBI sac fly by Paige — Olivia Whiting made an incredible juggling catch in center field — then Bailey led off the fifth with her homer over left-center for a 5-0 lead.

“(Small-ball) was a big part of our game plan. We wanted to get the leadoff runner on base and score her,” Paige said. “The last two games, it took us until the sixth inning to get going, so we wanted to start early.”

“We knew they were gonna small-ball us to death, and we practiced it all week long,” Whitehall co-coach Pam Putorti said. “We executed, but not as fast as we needed to, because we didn’t get the bang-bang plays we needed.”

Whitehall bunched four singles — including Hope Chappell’s two-run drive down the left-field line — in the fifth. However, Fort Ann got out of the inning on a close play at the plate as Chappell tried to score on a wild pitch.

In the seventh, the Railroaders had the tying run at the plate, but Bailey induced a flyout to end the game.

“We had our opportunities,” Putorti said. “That call at home was a total momentum-changer. Hat’s off to them — they executed their game plan and Kayla Bailey was outstanding. That’s what senior leaders do.” 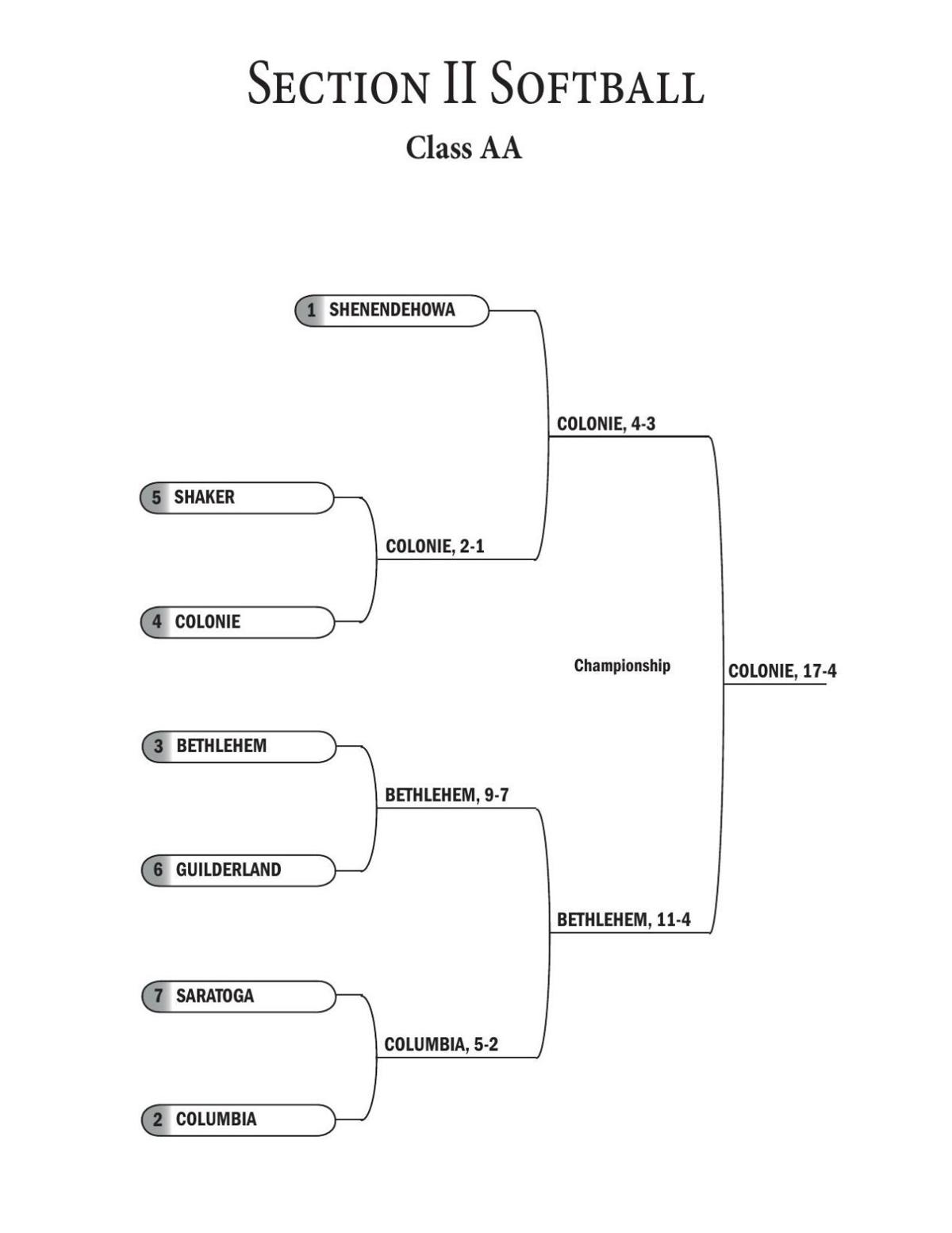 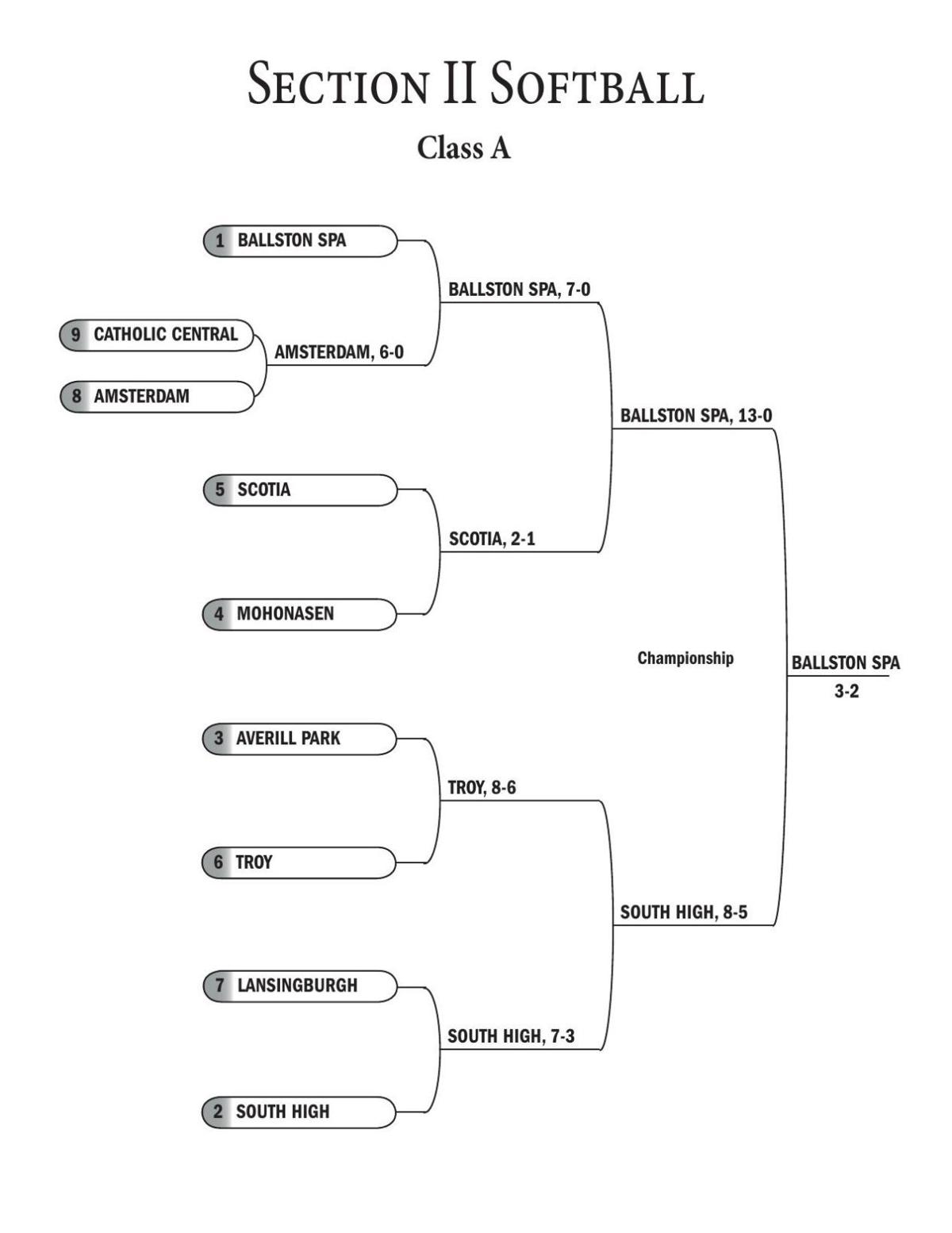 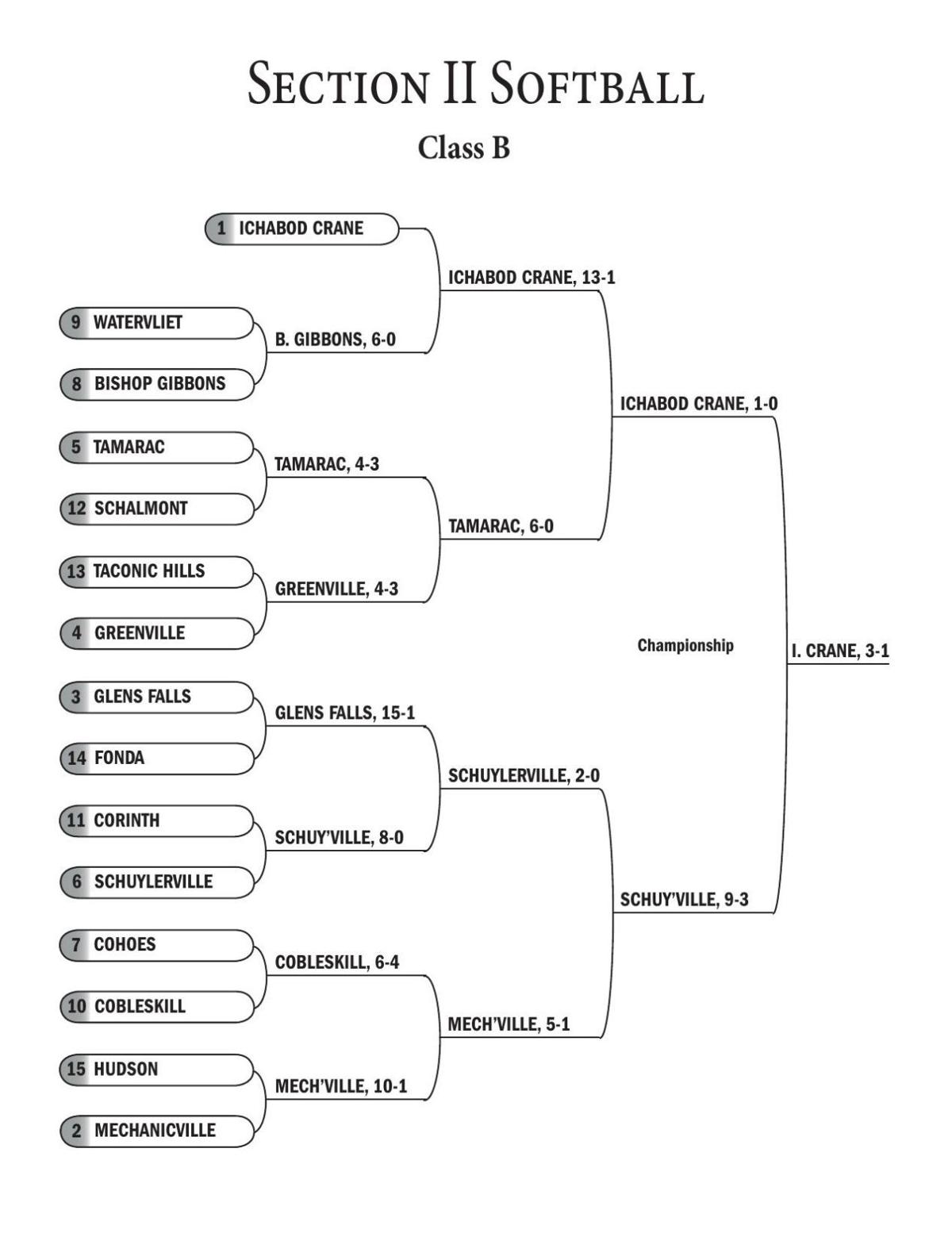 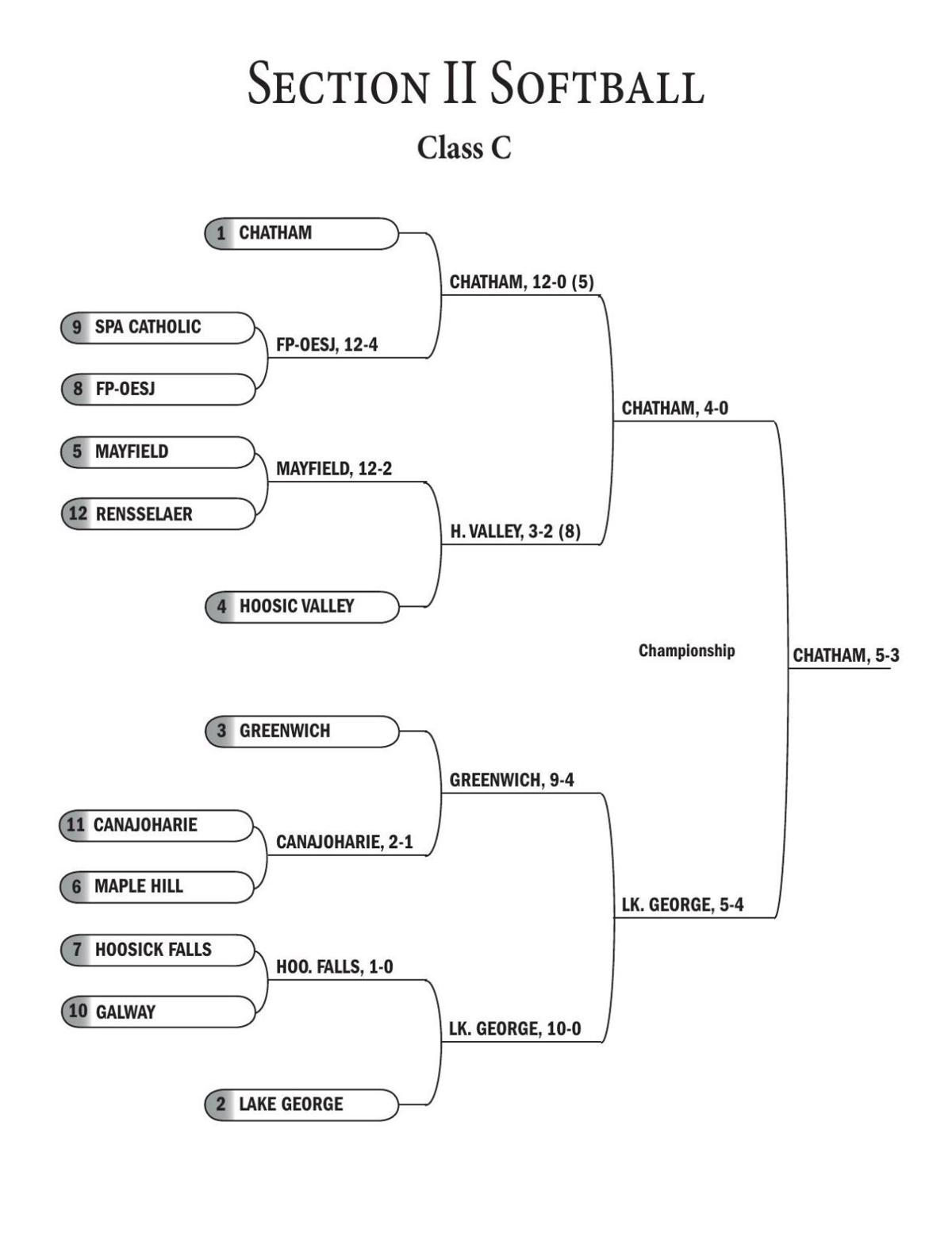 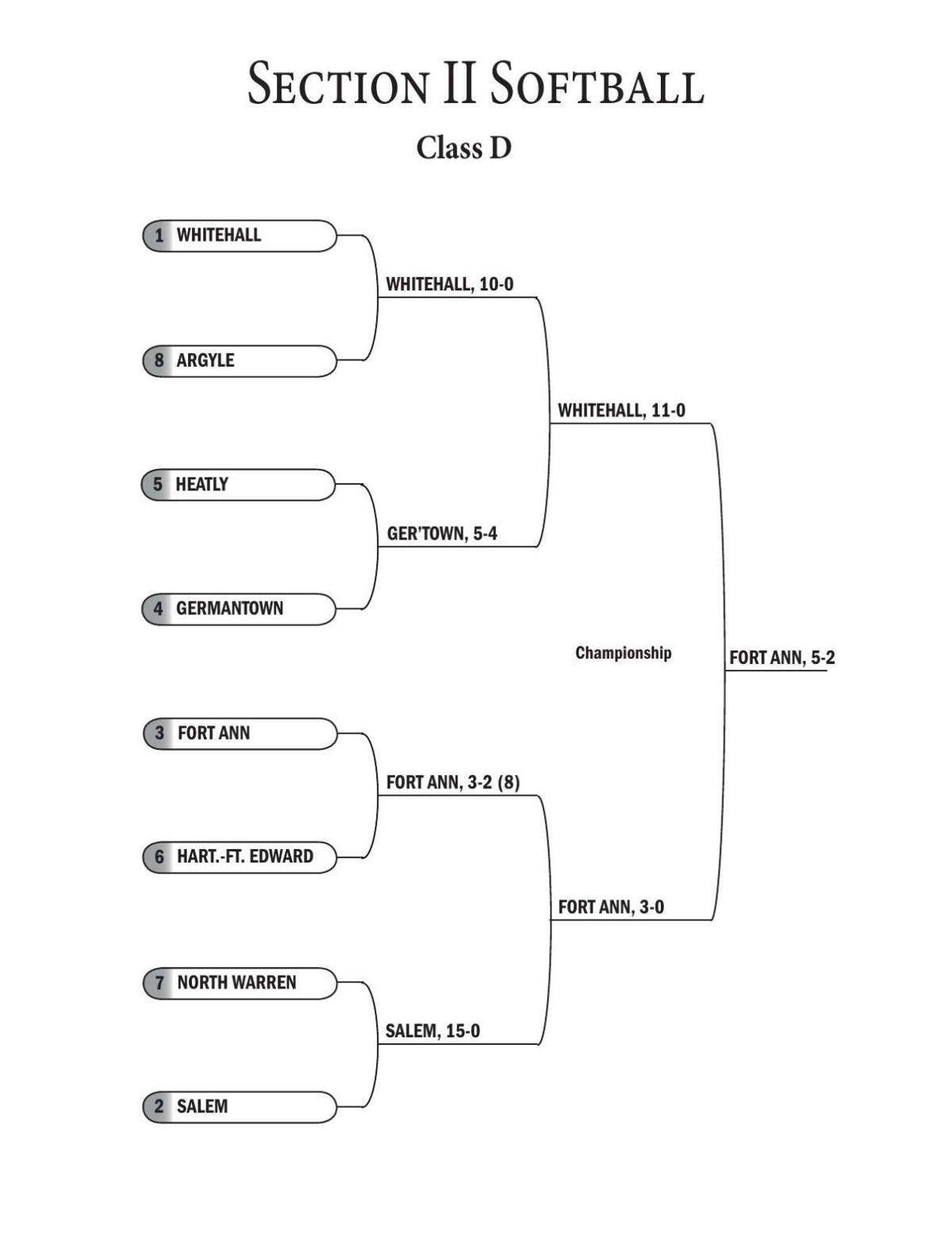 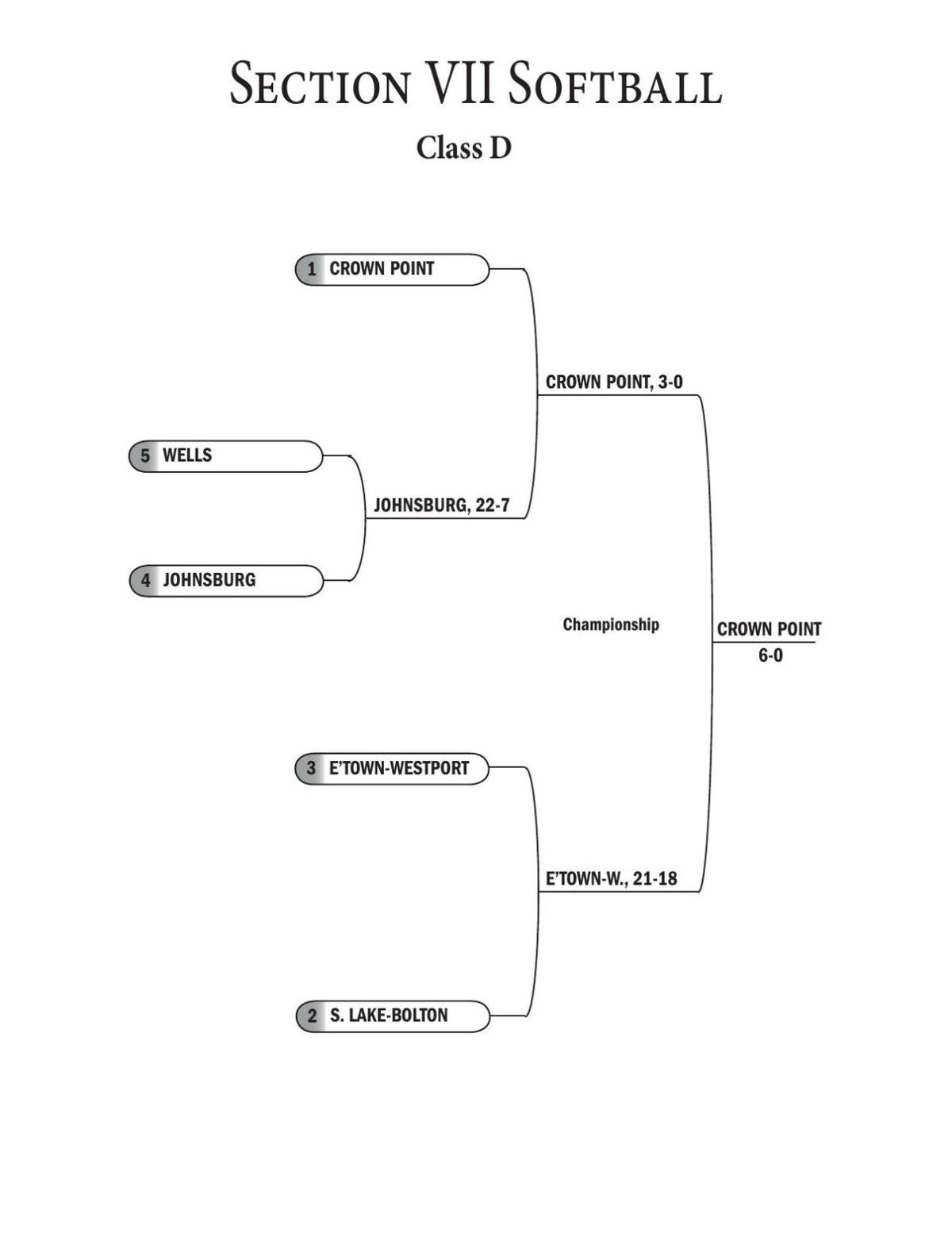 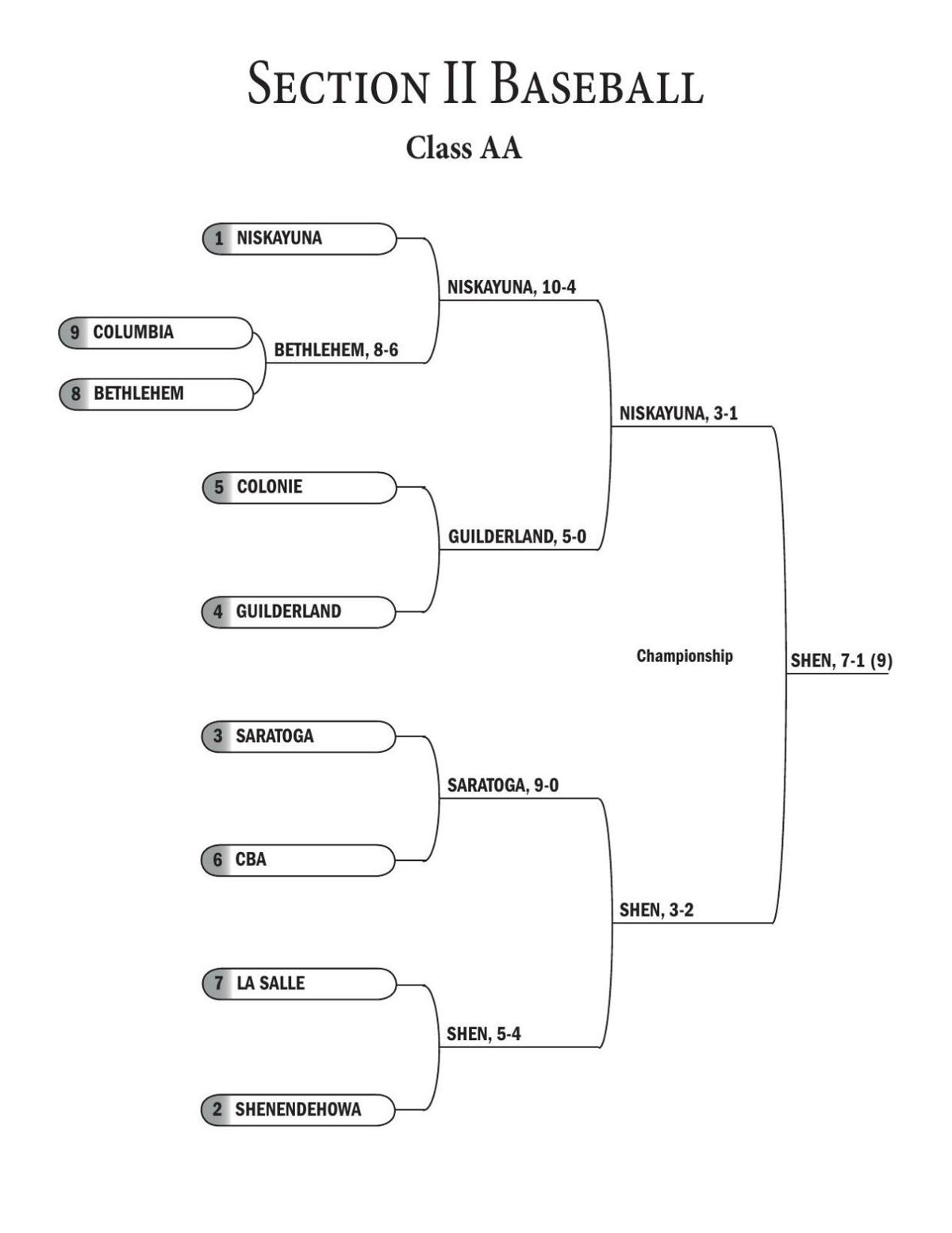 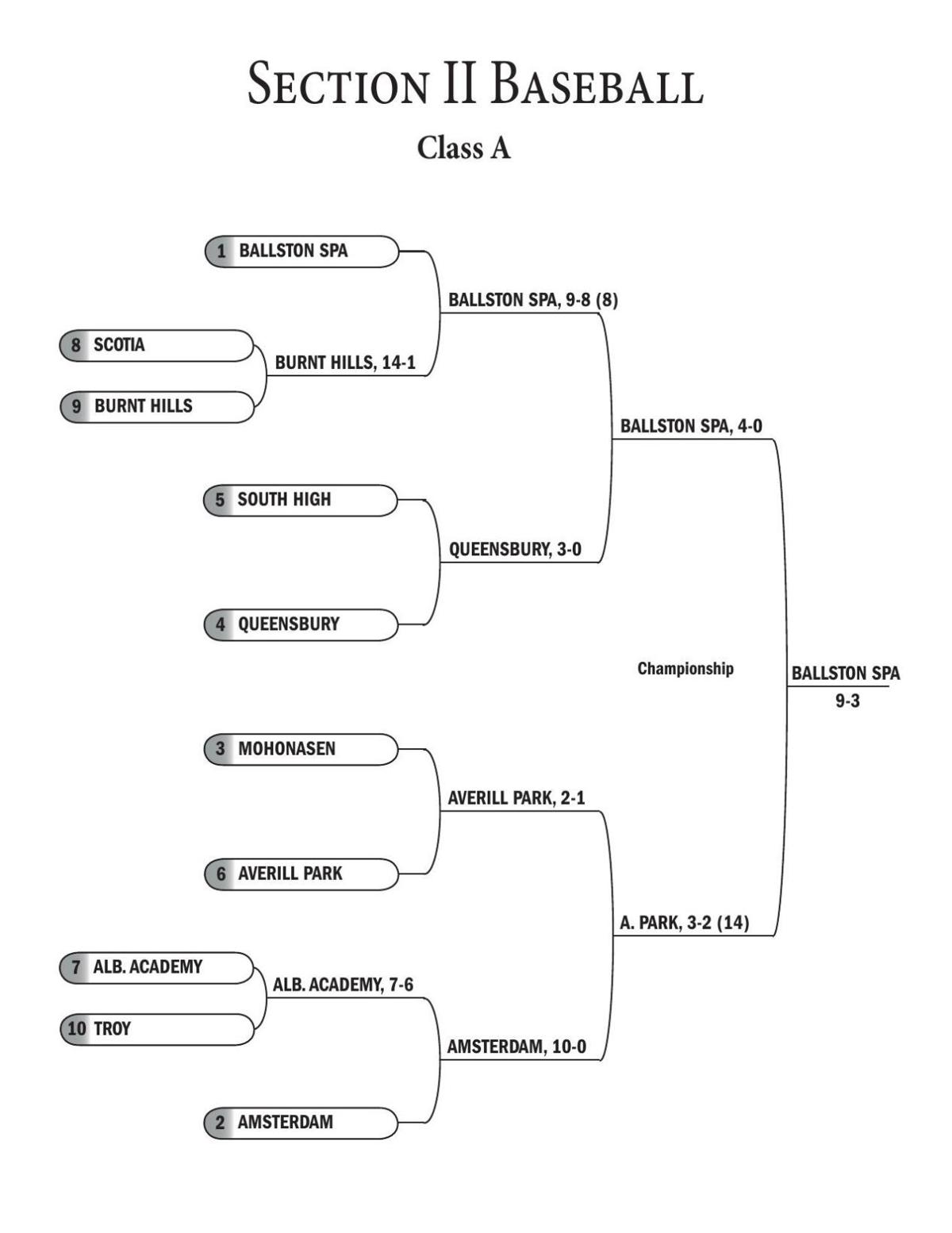 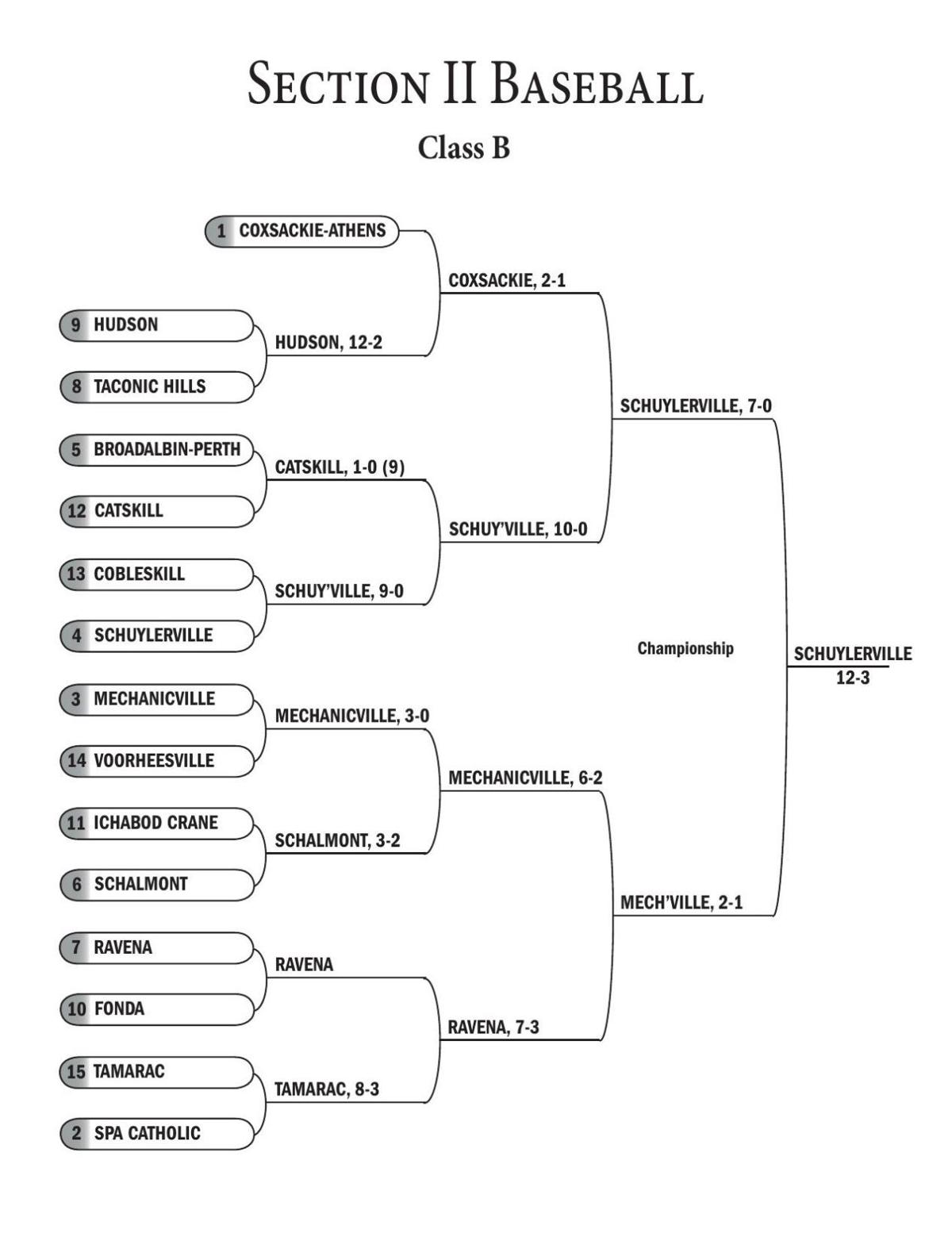 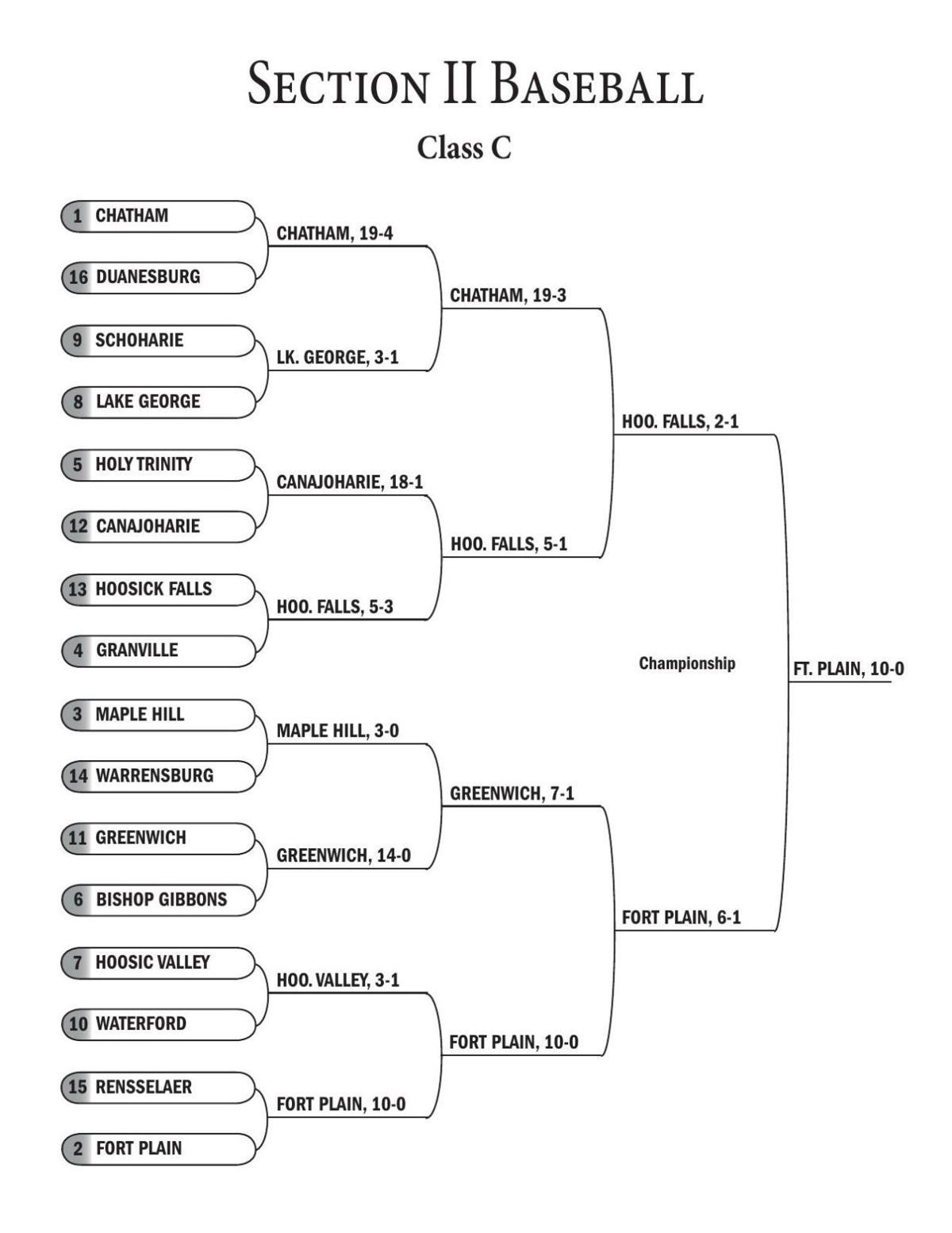 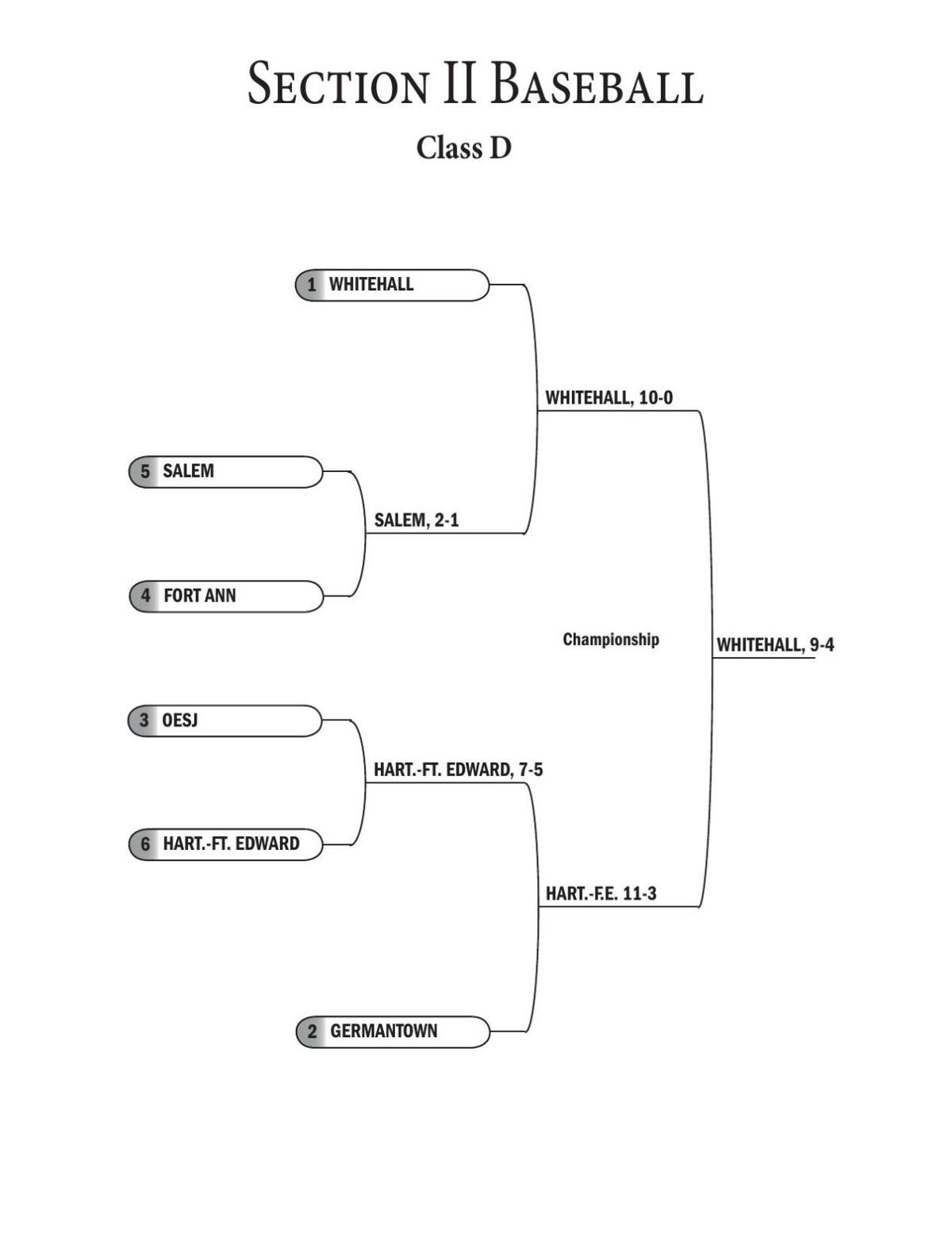 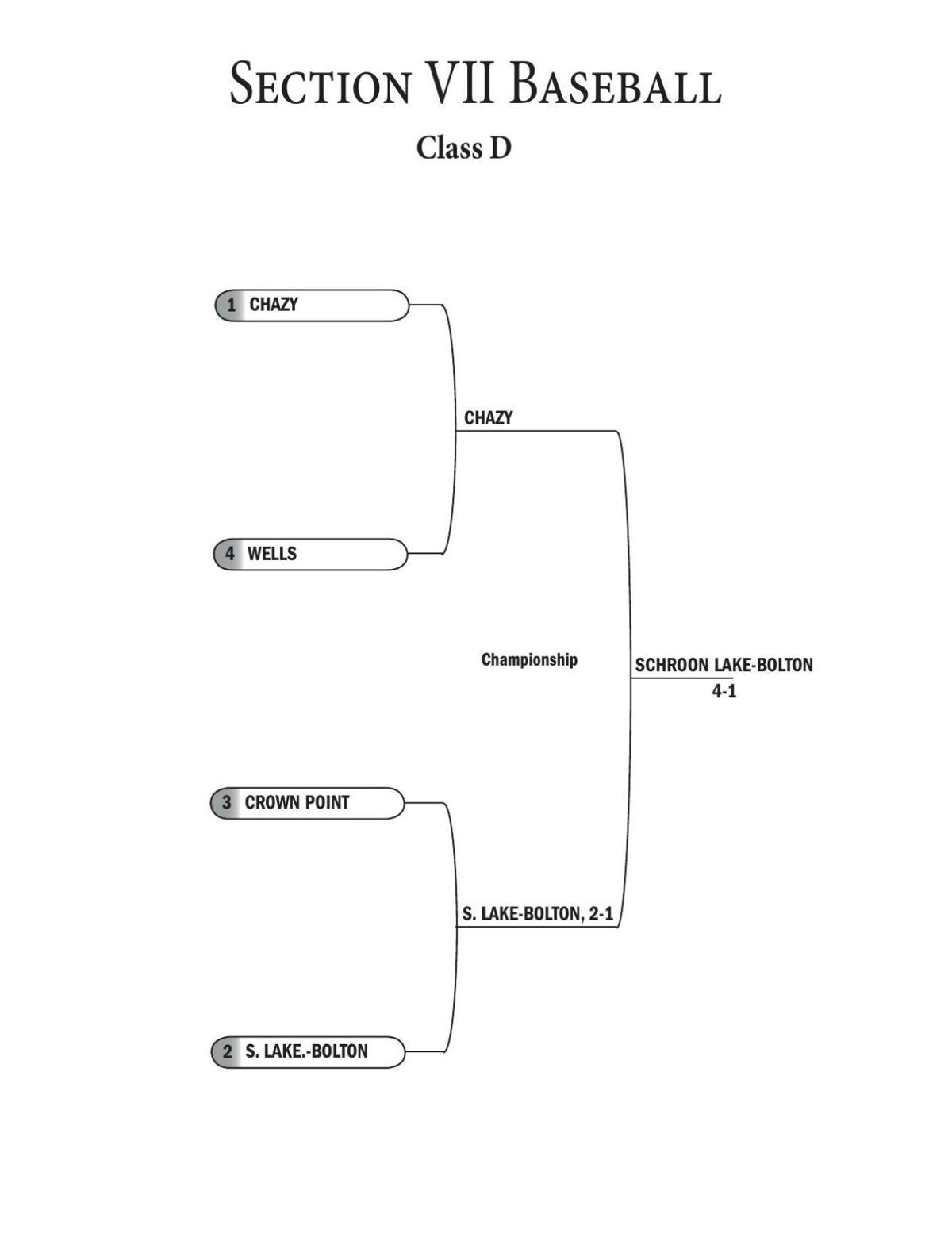 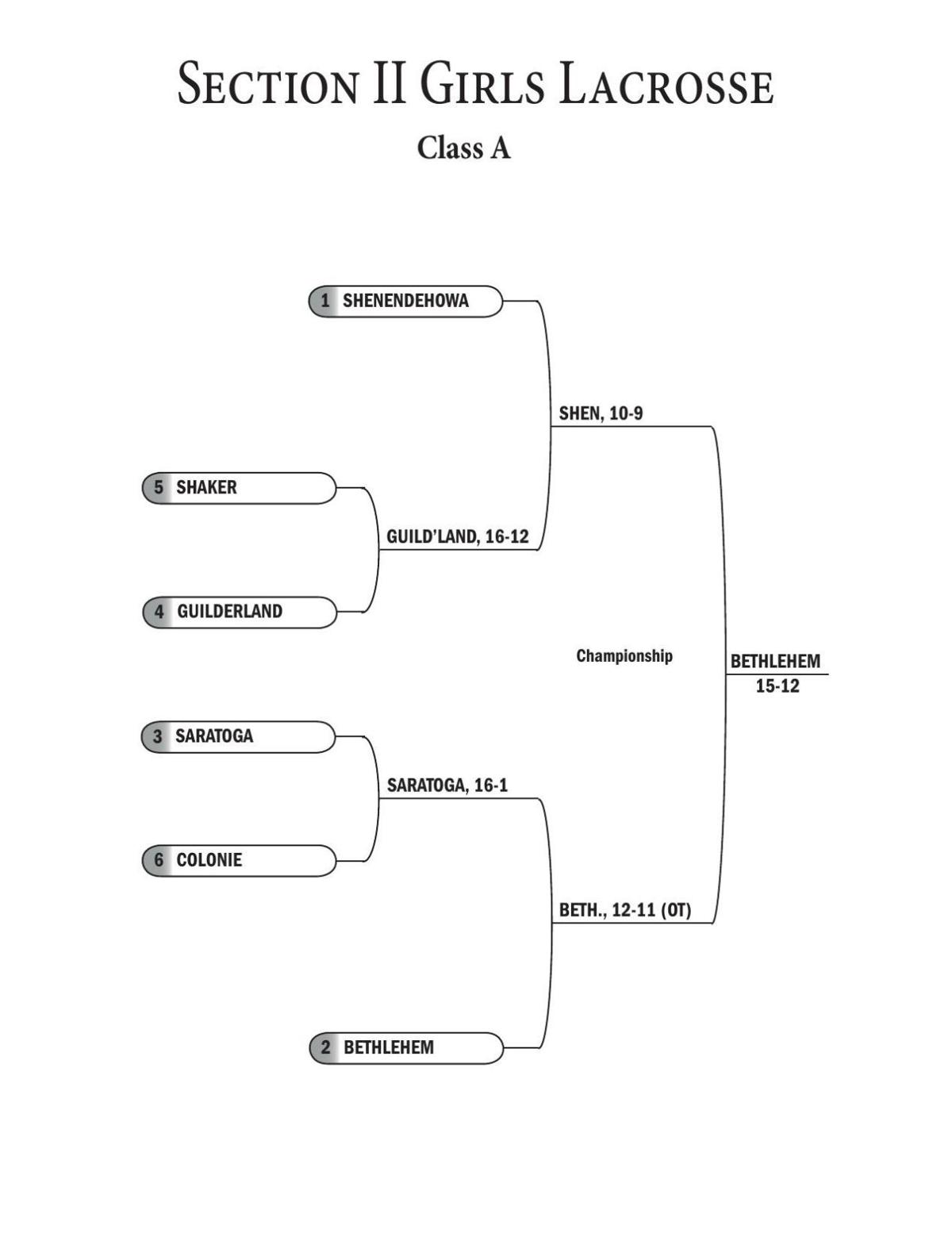 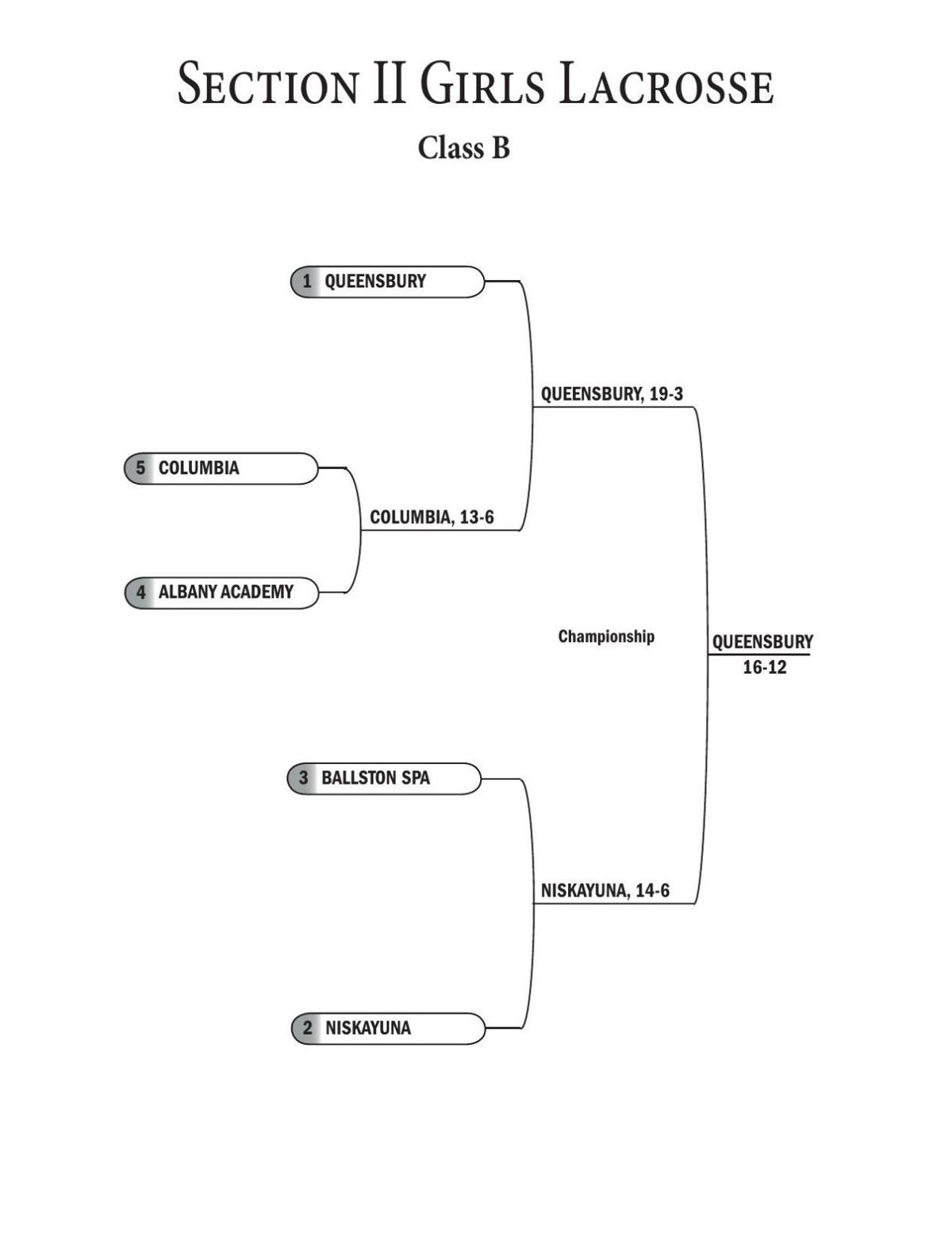 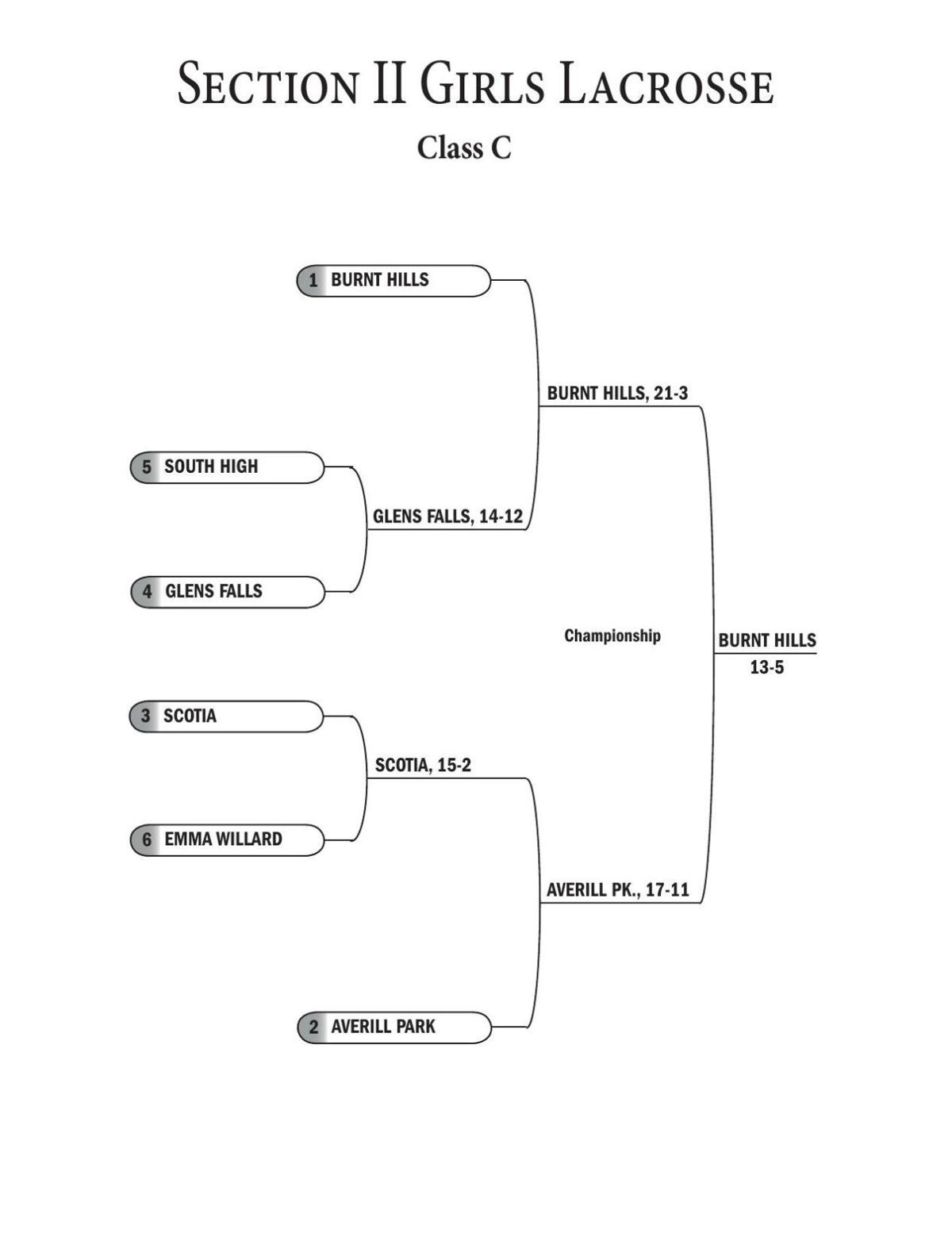 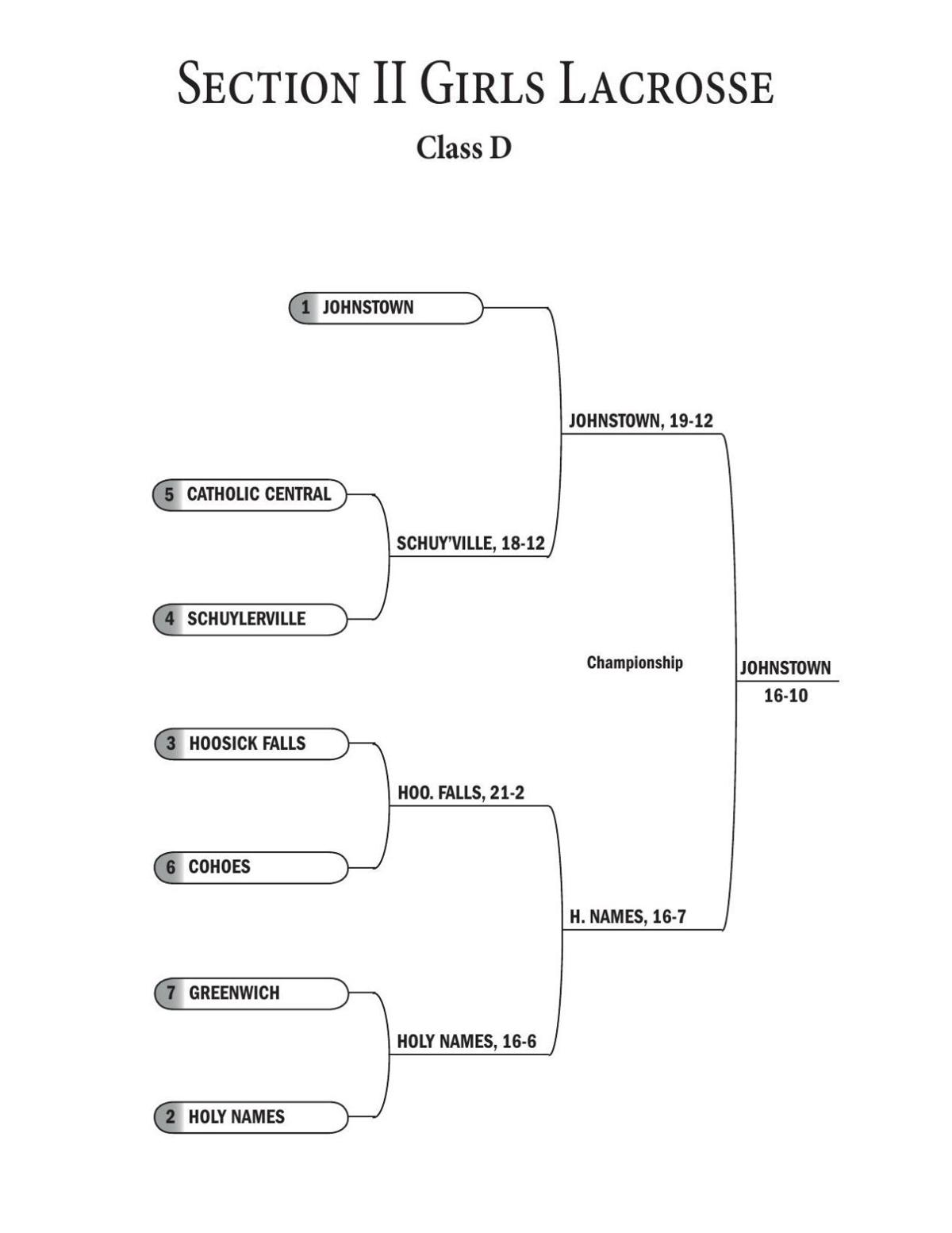 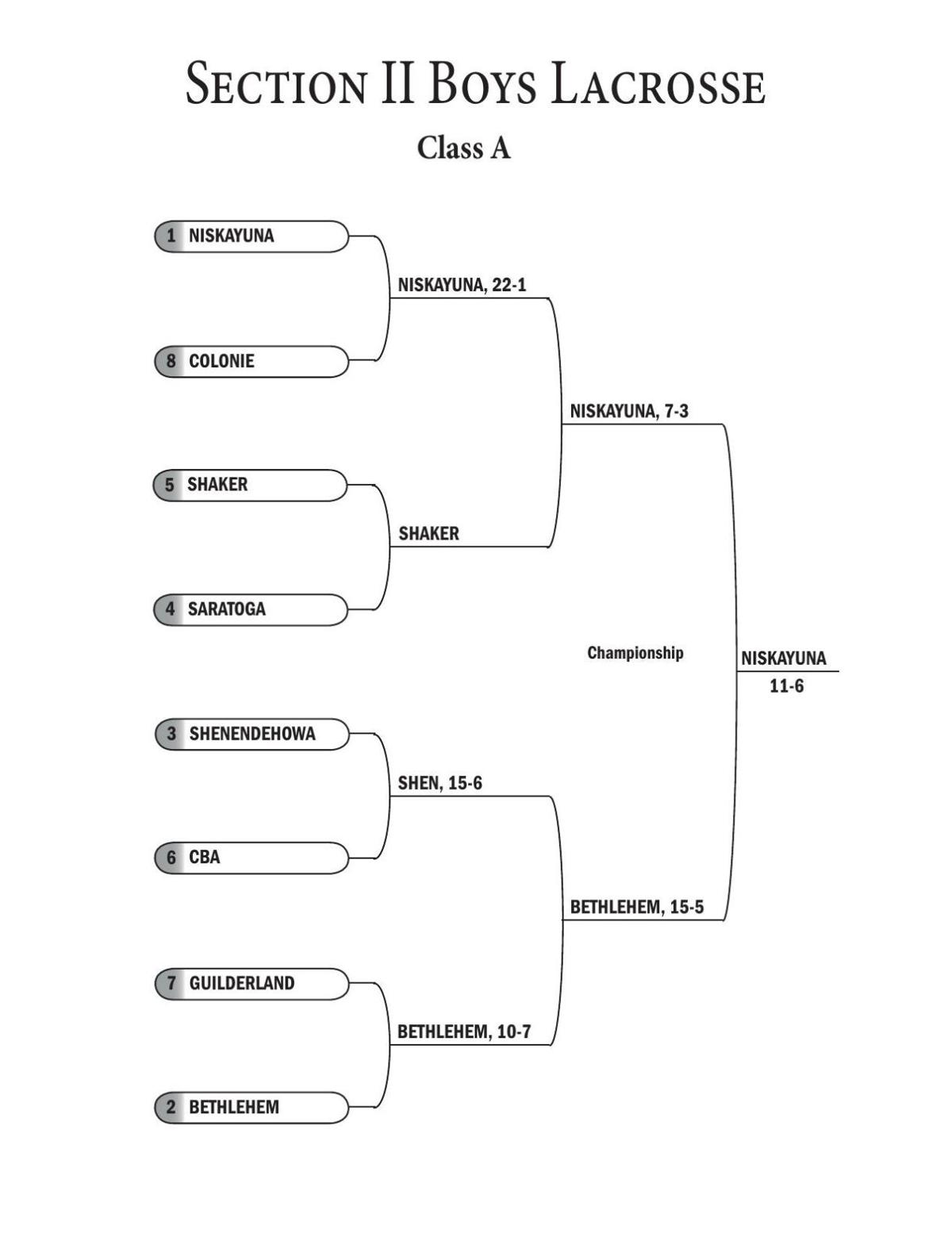 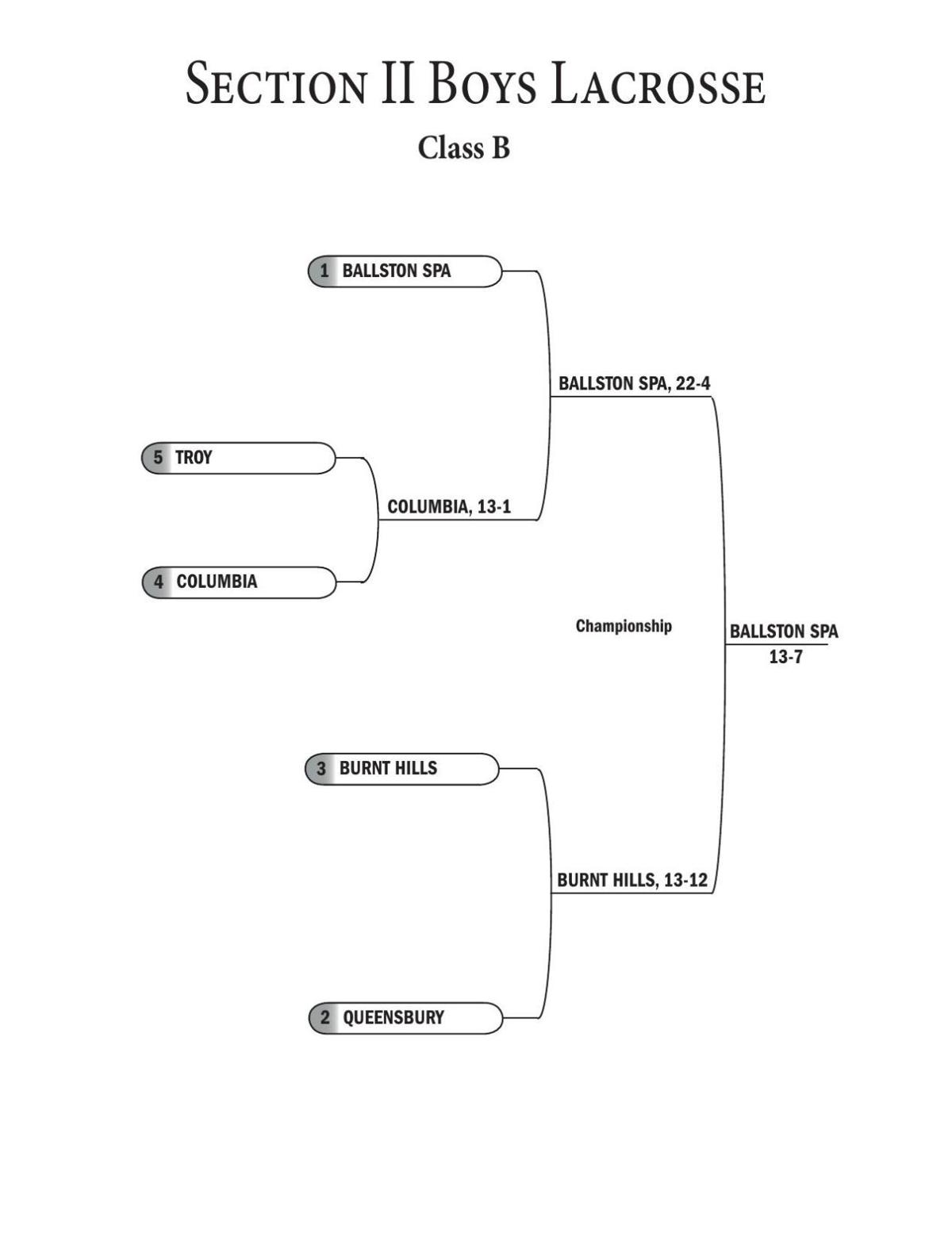 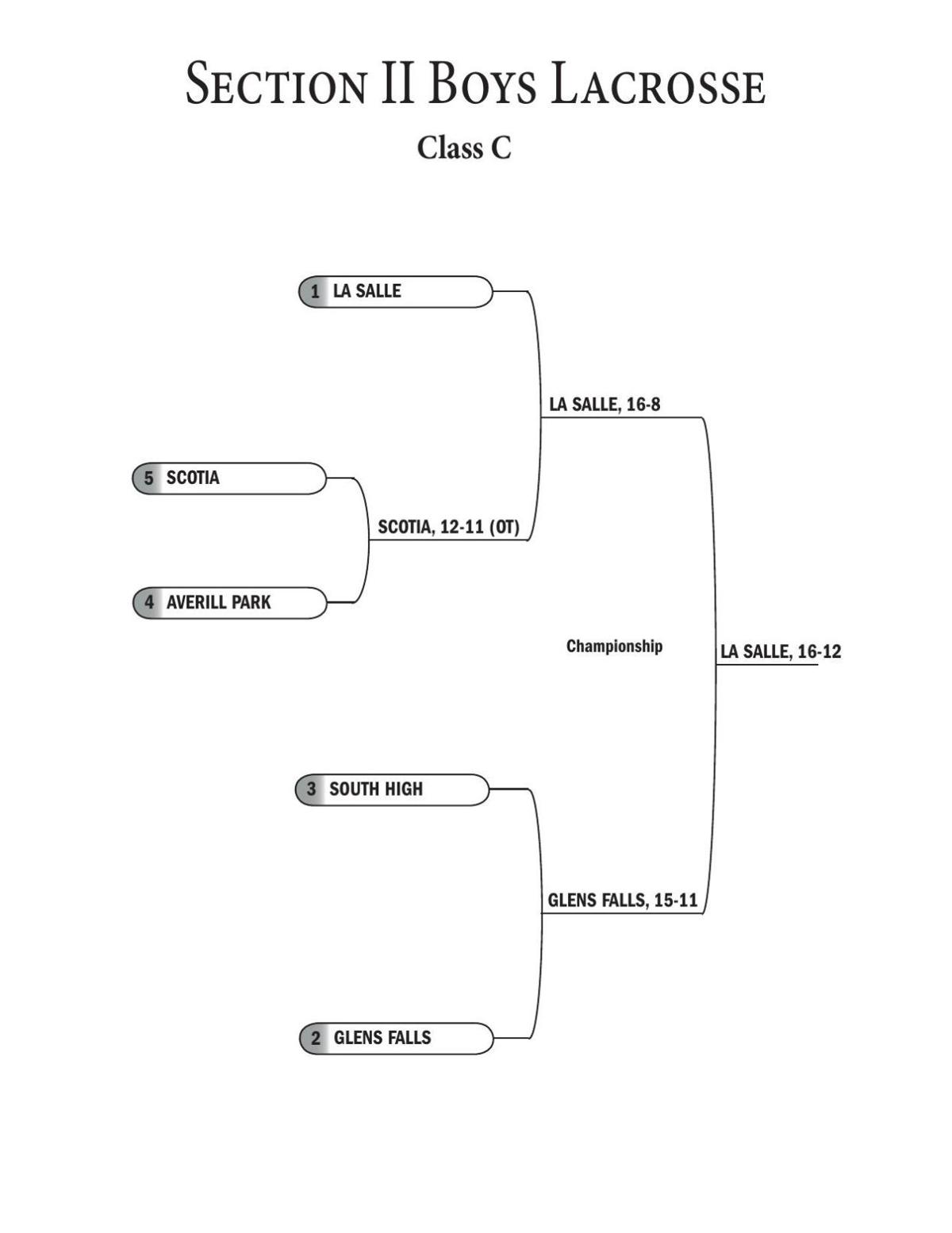 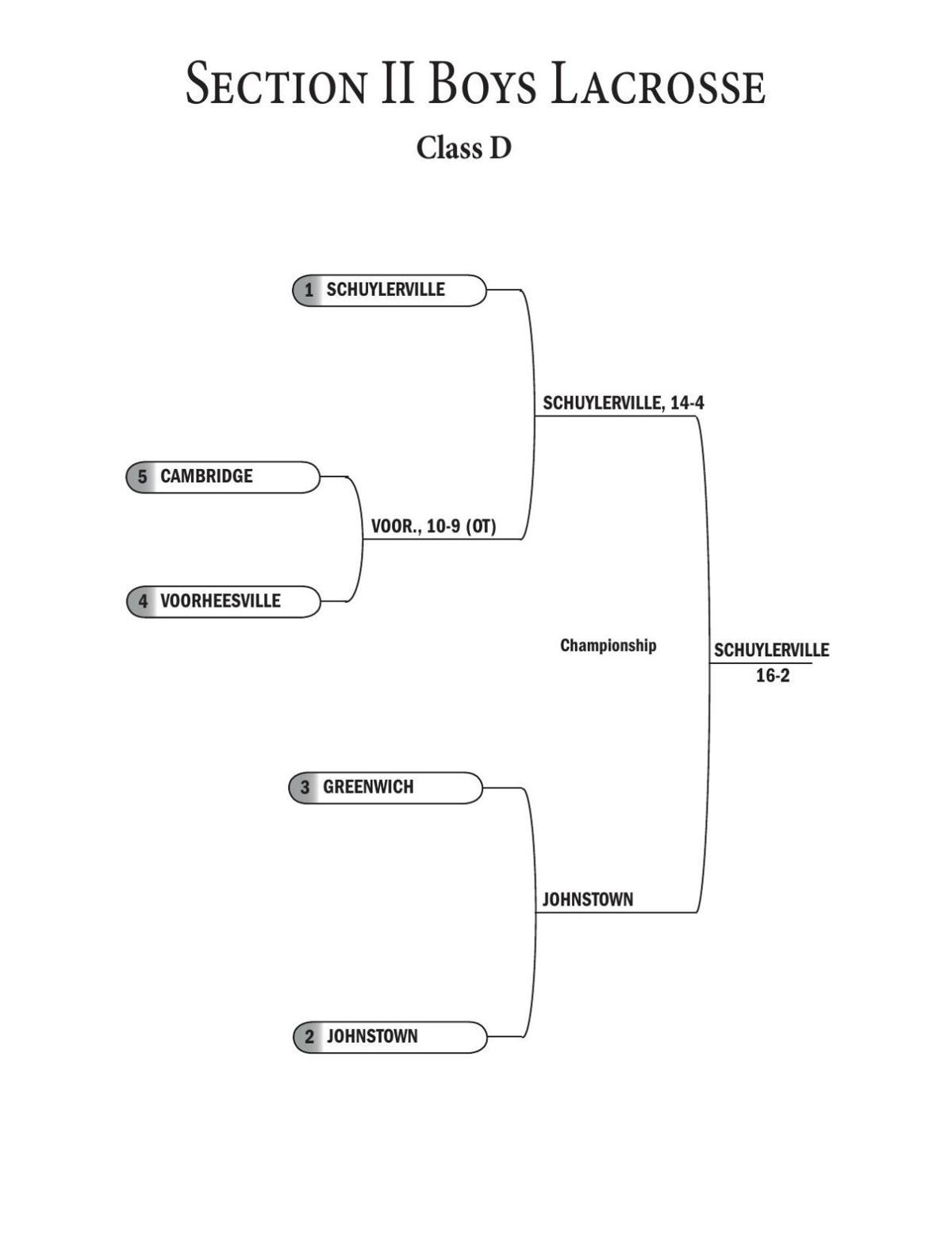 MALTA — South Glens Falls did something no other team had against Ballston Spa in the Section II Softball Tournament, but it still wasn’t quit…

MALTA — It wasn’t in the cards for Schuylerville on Tuesday.

MOREAU — One back-breaking home run was most costly to Lake George in Tuesday’s Class C championship game of the Section II Softball Tournament.

Fort Ann may have a less-experienced team this season, but few softball programs have as much state-level experience as the Cardinals.

MOREAU — An era came to a close Friday, in a frustrating series of errors and missed opportunities.

Fort Ann players and coaches hold up their patches after winning the Class D title of the Section II Softball Tournament on Tuesday at Moreau Rec.