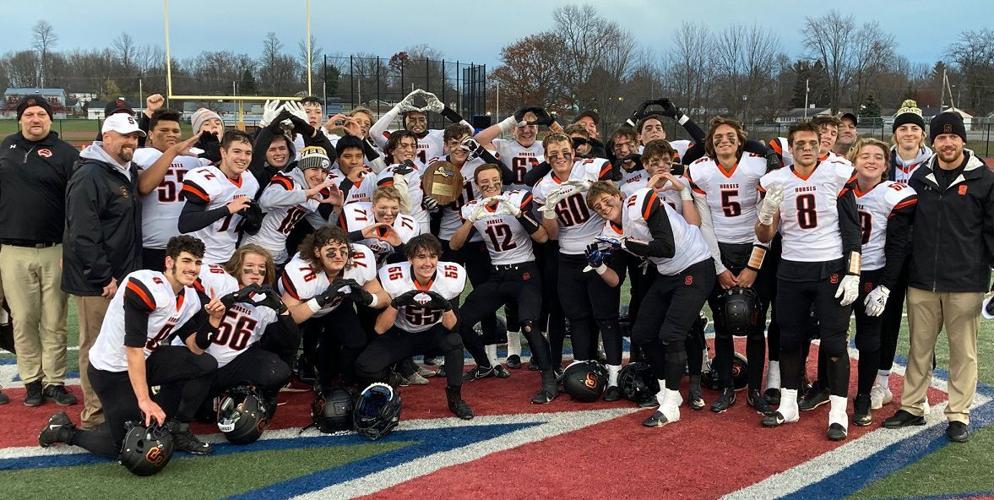 Schuylerville players pose with the state regional plaque they won for beating Ogdensburg Free Academy on Saturday in a state football quarterfinal. 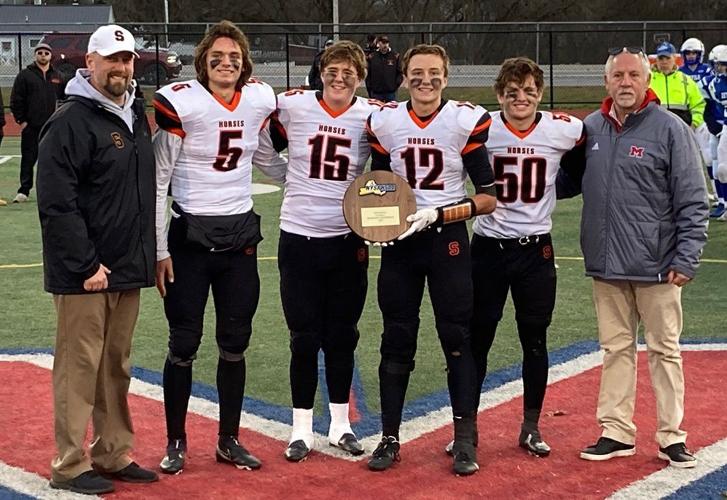 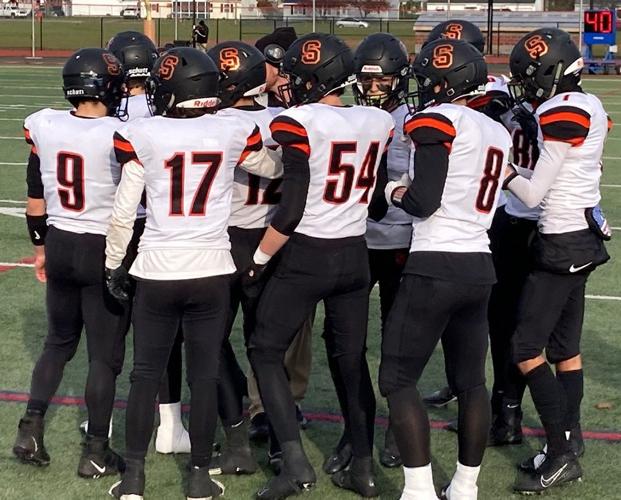 MASSENA — Schuylerville’s football players watched the sun come up and go down as a team on Saturday, part of a 400-mile round-trip journey with a state quarterfinal in the middle.

One issue that was settled: The Black Horses travel well.

The Horses thoroughly demolished Ogdensburg Free Academy 52-0 to win the state regional plaque and earn a trip to the Class C state semifinals. The Black Horses, now 12-0 and carrying a 19-game win streak, will play in Middletown next Saturday at noon against Dobbs Ferry.

Schuylerville moved the ball quickly and decisively on offense. In the middle of it all was Ryan Dow, who scored six touchdowns — five of them on passes from Owen Sherman.

“I just loved our effort as a team,” Dow said. “We all rallied together. We knew it was going to be a dogfight from the start, we knew we had to come out ready to play.”

The Horses scored on every possession until a kneel-down ended the first half. Dow scored the first TD on a 1-yard plunge to cap off a 65-yard drive, and later hauled in Owen Sherman passes for scoring plays of 46, 34, 20, 14 and 30 yards.

Owen Sherman finished 8 for 9 with 190 yards passing. He was extremely accurate, and he threw one of them with an OFA player wrapped around his leg. Dow had 187 yards receiving.

“Owen threw great balls on all of them, but that last one was special,” Dow said. “He just threaded the needle. I didn’t know if it was coming or not, but it was an amazing ball and I just loved it.”

Not only was Owen Sherman efficient, the passing game was diverse. Schuylerville started the game with back-to-back passes into the flats. Later, Owen Sherman threw some impressive spirals downfield.

“We’ve been a running football team, but we’ve felt all season long, if and when we did need him to put the ball in the air, he could,” head coach John Bowen said.

And the Horses did run the ball. Seven players carried the ball and racked up 244 yards on the ground, giving the Black Horses' offense a total output of 434 yards. This, with the second string in for the fourth quarter.

The Horses were concerned about OFA’s size heading into the game, but their speed and agility was more than enough to overcome it.

“We knew man for man from a physical standpoint we couldn’t match up with them,” coach Bowen said. “We were going to have to kind of turn this into a track meet. That was kind of our objecting going into it, to play as up tempo as we could.”

Ogdensburg was able to do little against the Black Horses’ defense. One of OFA’s few big gainers was a pass play that tipped off a Schuylerville defender’s hand and into the arms of an Ogdensburg receiver.

Schuylerville sometimes went with three down linemen up front, with Austin Prouty in the middle. They were still effective in penetrating the offensive line.

“They’ve been something our defense has kind of rested on all season long,” coach Bowen said, “and their ability starts kind of at the point with Austin the middle. ... We’ve managed to do a pretty decent job of keeping some really good offenses in check.”

A big second half lifted Moriah to a 28-14 victory over Greenwich in a Class D state football semifinal on Friday at Faller Field.

Our preview of Saturday's state football semifinal between Schuylerville and Dobbs Ferry.

Schuylerville punched its ticket to the Carrier Dome with a lopsided state semifinal victory on Saturday.

Greenwich captured the Class D football title on Saturday with a 31-7 win over Stillwater.

Queensbury's season ended at the hands of Burnt Hills in the Class A championship game on Saturday night.

Schuylerville players pose with the state regional plaque they won for beating Ogdensburg Free Academy on Saturday in a state football quarterfinal.