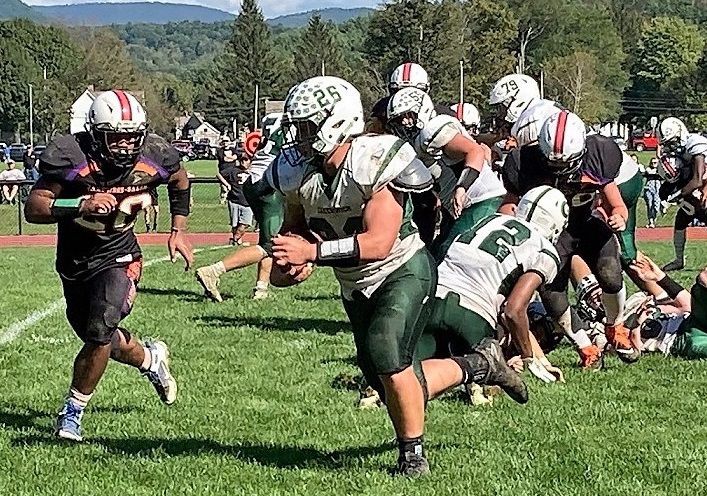 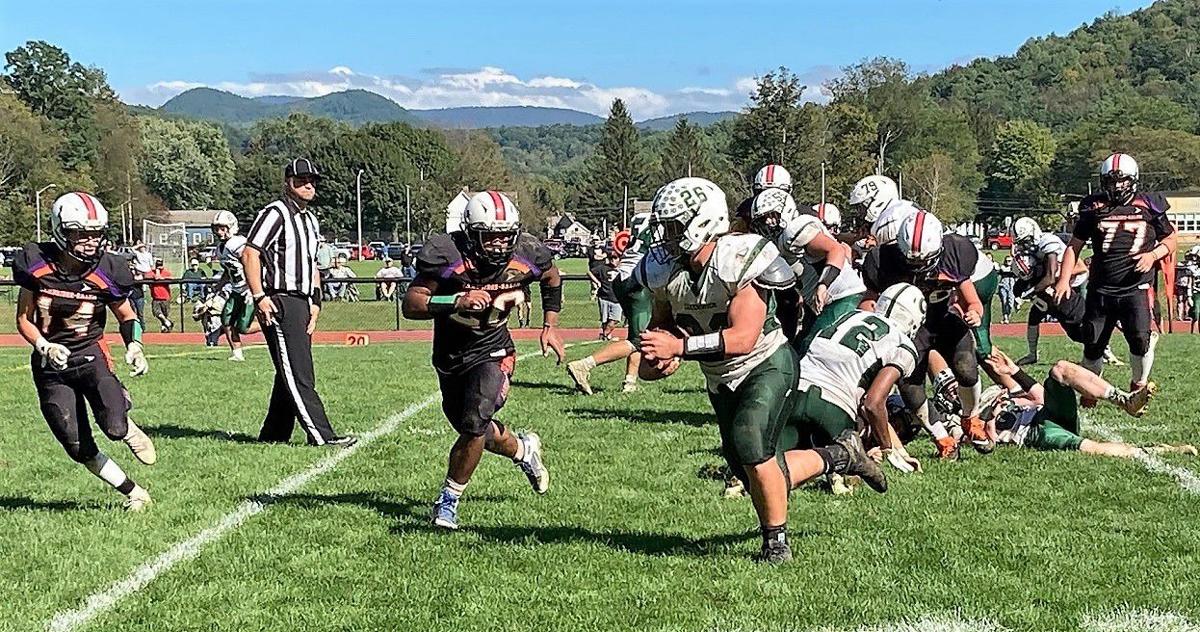 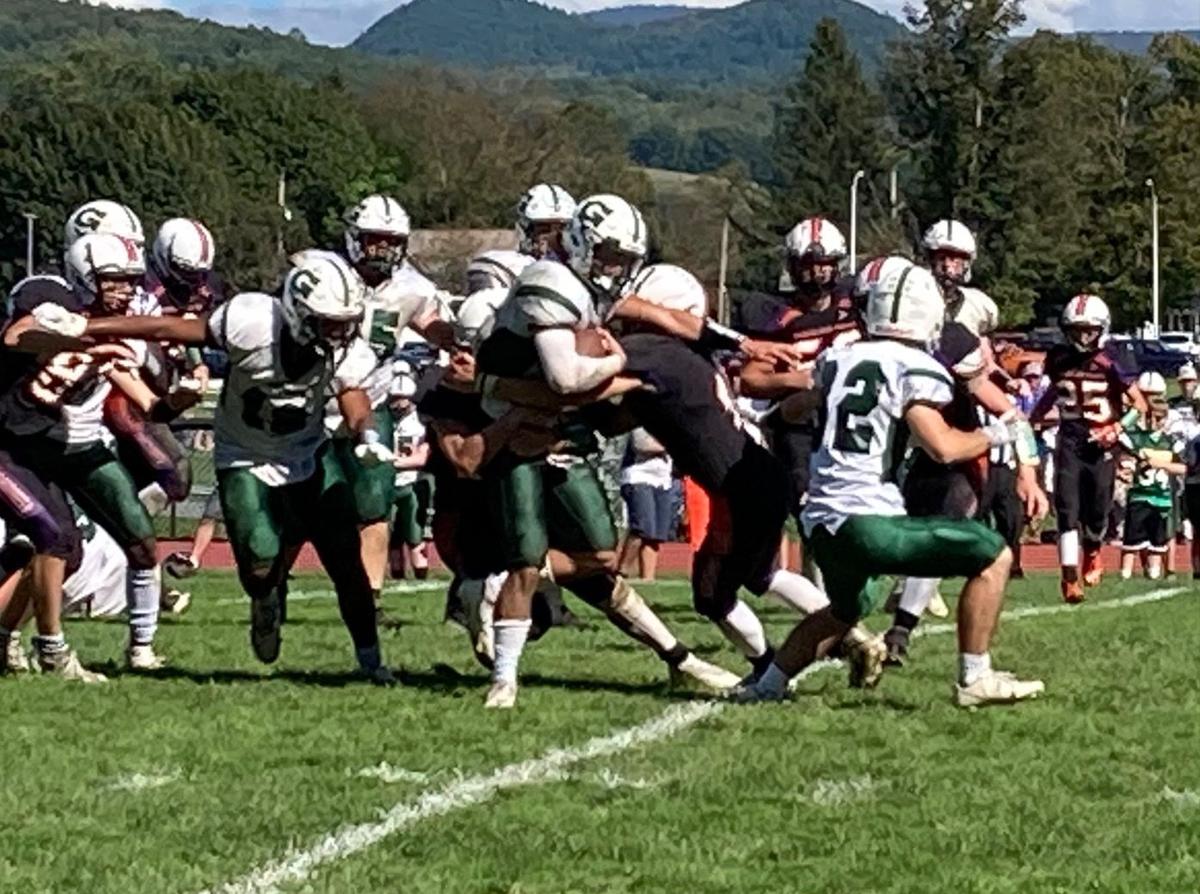 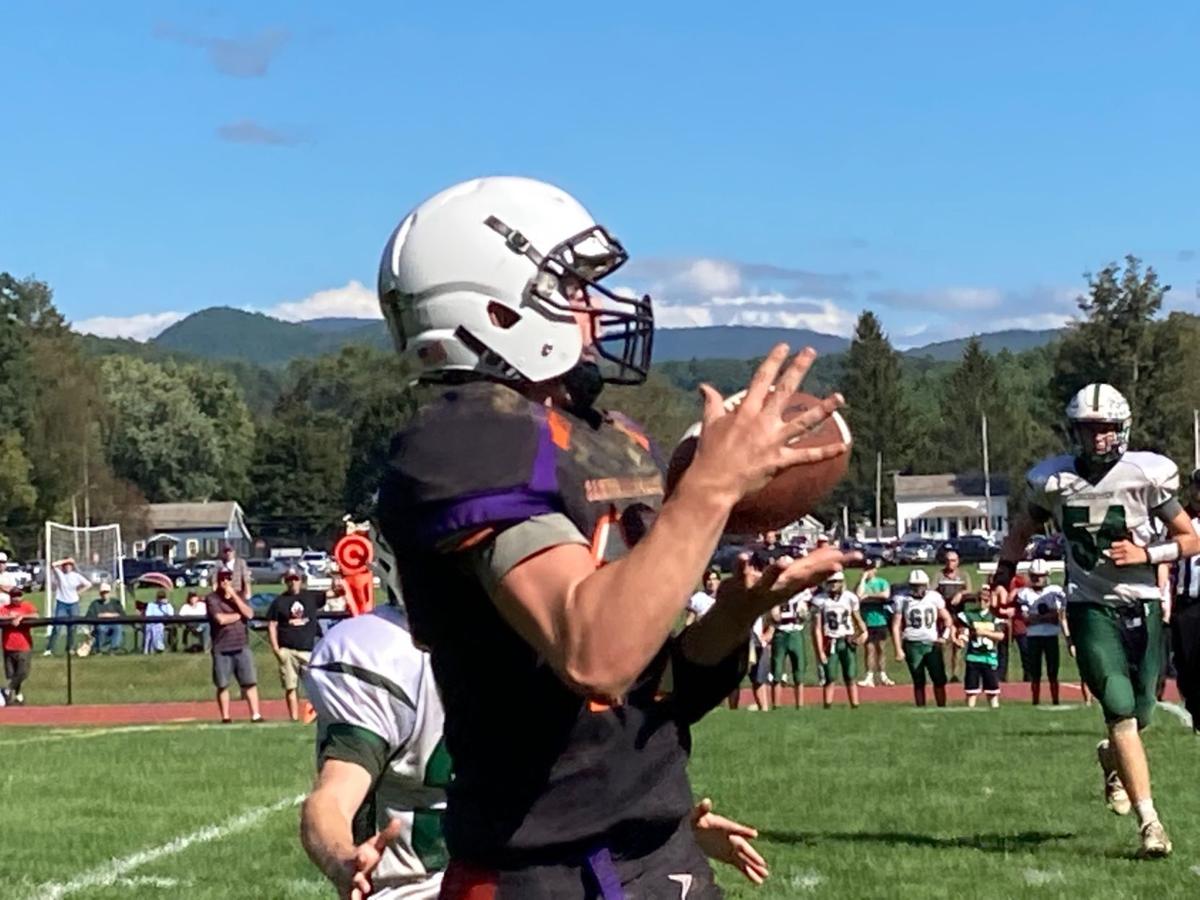 CAMBRIDGE — Jesse Kuzmich bobbled the snap, ran into his own running back, lost the football, scooped it back up and still turned the play into a 12-yard gain.

It was that kind of Saturday for Greenwich — everything seemed to click, even the busted plays.

In the process, the Witches administered a 49-0 Class D North defeat of Cambridge-Salem — a lopsided loss the likes of which the Cambridge program has only rarely experienced.

“Start to finish, that was probably our most satisfying win in years,” said Greenwich head coach Brandon Linnett, whose team won its first divisional game and improved to 3-0 overall. “We played well today, and they probably didn’t play their best game. I’d like to think we made that happen.”

Kuzmich accounted for five of the Witches’ touchdowns — passing for 149 yards and three scores; rushing for 109 yards, including a 56-yard touchdown sprint; and capping off his day with a 67-yard interception return for another.

Kuzmich found Tyler Day for a 76-yard scoring pass and hit Aidan McPhail with another touchdown for a 28-0 halftime lead. He also connected with Deontae Bennett for a score.

Matt Conlin and Colin Hughes added scoring runs for Greenwich. Conlin, the Witches’ burly sophomore back, finished with a game-high 110 yards on 19 carries.

As a team, the Witches finished with 423 total yards.

“Our game plan was just to use our versatility on offense, use our weapons, and that’s what we did,” said Kuzmich, who completed 6 of 10 passes. “Deontae, Matthew, Colin Hughes, Jayden (Hughes), they all had big days. We all helped each other out.”

“We’ve got some pretty good moving parts there,” Linnett said. “I know we put up 49, but they hit us — we’re beat up. You got hit all day, there were very few free runs.”

The loss was the worst for a Cambridge football team since a 47-0 loss to Dobbs Ferry in the 2007 Class C state semifinals. The program had not suffered a home loss so lopsided since the mid-1980s.

“We have no excuses, other than they were just a lot better than us,” Cambridge-Salem coach Doug Luke said. “I’ve been on the other side of these, and it’s a lot more fun.”

Both teams set the tone on the game’s opening possessions. The C-S defense had stuffed Greenwich on three downs, but a defensive holding penalty gave the Witches a first down. Five plays later, Conlin plowed 4 yards for a touchdown.

After C-S (0-1, 2-2) turned the ball over on downs at the Greenwich 20, Kuzmich took off on his big touchdown run for a 14-0 lead. Minutes earlier, C-S had lost its top running back/linebacker, Mike Riche, to what appeared to be an ankle injury.

“We had lost our linebacker whose responsibility is that quarterback coming out of the backfield,” Luke said. “From there, it just went downhill. It wasn’t meant to be. We really thought that we could play with them. We have some work to do.”

C-S managed 177 yards total offense, but racked up at least 10 penalties and turned the ball over four times, including two picks by Kuzmich and another by Jamieson Parker.

“I have eight or nine seniors that have played a lot of football, and that shows up sometimes,” Linnett said. “(Luke) doesn’t have a lot of those — he has a lot of good players, but he doesn’t have the pile of seniors that has played as much as ours have for three years — some of them four, like Jesse Kuzmich and (lineman) Gavin Blair.”

Jesse Kuzmich passed for three touchdowns and ran for another, and Deontae Bennett scored three times Friday as Greenwich rolled past Helderberg Valley.

Schuylerville held on for a 14-7 Class C North football victory over Fonda on Friday night.

Corinth/Hadley-Luzerne fell to 0-3 on the season with a 50-0 loss to Cobleskill on Friday night.

Lake George held on for a 19-12 victory over Canajoharie-Fort Plain in its twice-delayed football season opener.

Dylan Winchell and Tim Kelly combined to rush for 333 yards and five touchdowns to lead Warrensburg past Granville 54-0 on Saturday.

The Hudson Falls football team opted to forfeit its game against Ravena rather than make a return trip to resume Friday's suspended game.

NFL Week 6 Market: Will weather be a factor?