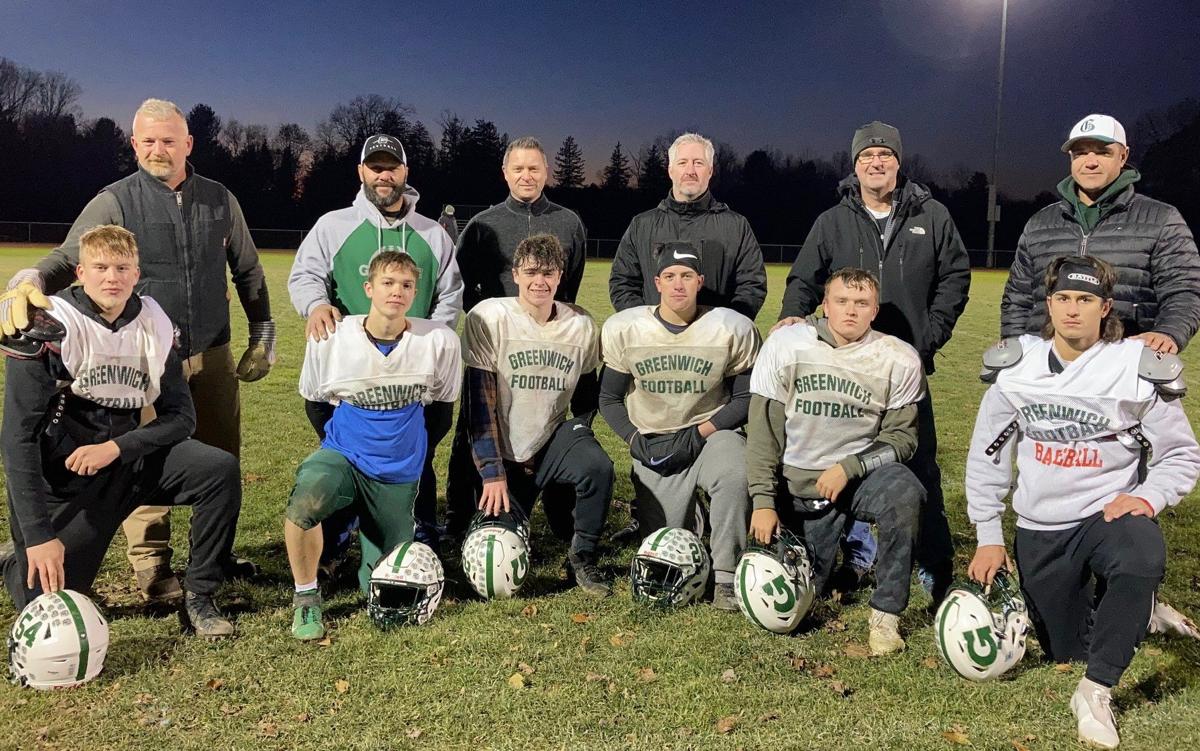 Greenwich football players pose with their dads after Tuesday's football practice at the high school. Pictured are, from left, Gavin Blair and his dad, Don; Kadyn MacNeil and dad, K.C.; Colin Hughes and dad, Pete; Matt Conlin and dad, Mike; Aidan McPhail and dad, Todd; and Jesse Kuzmich and dad, Brian. All of the current players' dads played for Greenwich in the late 1980s and 1990s. 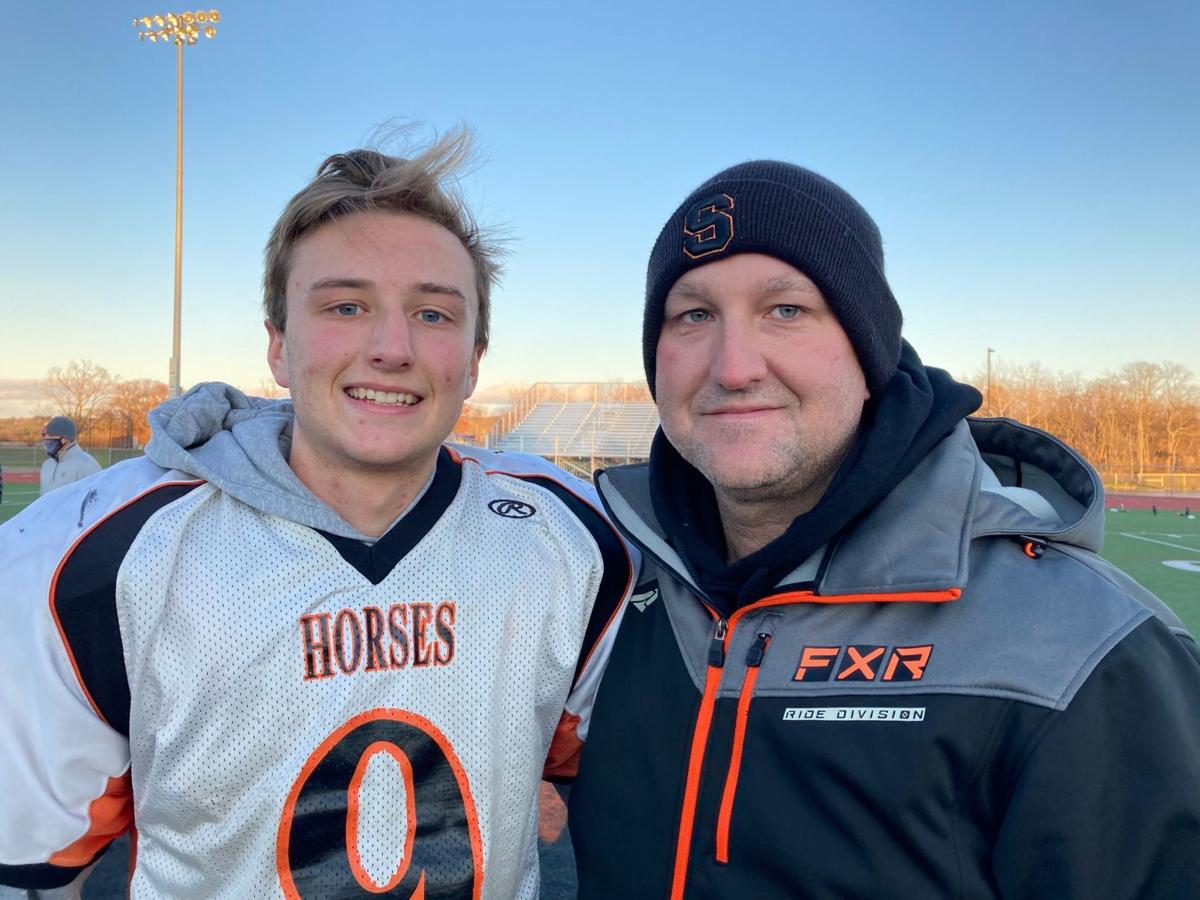 Bundled against the brisk, frigid breeze Tuesday evening, the Greenwich football team practiced under the lights on Jordy Jackson Field.

Put through their paces by the coaching staff, the Witches were preparing for the state semifinals — a welcome addition to the busy Thanksgiving week.

Watching from the side were a group of onlookers, equally bundled, but long removed from their own playing days.

A generation ago, this group of dads were standouts for the Witches themselves, but they took the opportunity to check out their boys practicing for their own postseason run.

Family and football often go hand-in-hand during Thanksgiving, and the family ties are certainly strong for the undefeated Greenwich and Schuylerville football teams, who are both playing in this weekend’s state semifinals in Middletown. Greenwich faces Moriah in Class D on Friday at 3 p.m., and Schuylerville takes on Dobbs Ferry in Class C on Saturday at noon.

“What makes it really special is we’ve been coaching these kids since they were 5, 6 years old,” said Mike Conlin, whose son Matt is Greenwich’s leading rusher. “To watch them make this run, and to have the relationships with the kids and their families, makes it that much more special.”

“It’s great — the Greenwich tradition, all one big family,” said Brian Kuzmich, Jesse’s dad. He and Mike Conlin were three-sport standouts and teammates in the early ‘90s. “It’s nice that our sons get to play together.”

Mike Conlin said his own playing days — including back-to-back state baseball championships in 1992-93 — gave him some rare insight to pass along to his son and his son’s teammates.

“What I’ve been telling Matthew is, don’t take it for granted,” he said. “This is pretty special and a great opportunity for you guys. Have fun and enjoy it, because it doesn’t happen very often.”

A similar scene is playing out just six miles east down Route 29 at Schuylerville High School, where several members of the Black Horses’ football staff are coaching their own sons.

“It’s a group that we’ve kind of watched come up throughout the years,” said Schuylerville head coach John Bowen, who coaches two of his own sons, senior Zach and freshman Josh. “They had a lot of success from the first time they put helmets and shoulder pads on as third-graders. They’ve been successful at every level of football they’ve played.”

In addition to the Bowens, the fathers of receiver Ryan Dow, Ryan Peck and Austin Prouty — Wally Dow, Kevin Peck and Steve Prouty, respectively — are all coaching their sons. There are also a few sets of brothers, including quarterback Owen Sherman and leading rusher Luke Sherman, and receivers Otto and Ollie Bolduc.

“Him and I are talking nonstop about football — we’re always doing something football related, whether it’s being at practice or just talking about stuff,” said Ryan Dow, who scored six touchdowns in Saturday’s state quarterfinal win over Ogdensburg Free Academy. “It’s really cool having him as a coach and him having all the knowledge, and we can just talk about something, whether I think of something or he wants to know my opinion on something that we’re going to do.”

“It’s really special — not only for me to have him, but honestly, all of these kids are like my own kids,” said Wally Dow, who coaches quarterbacks and defensive backs for Schuylerville. “I’ve coached them all since they were in second or third grade in various sports. We always hoped to get to this point with these kids.”

This entire team of Horses — several of whom contributed to Schuylerville’s run to the Class B state title game — has been a strong group for many years. Many are younger brothers of players who enjoyed success at Schuylerville in recent years.

John Bowen said most of his players have all been around his house since they were young, growing up with his three sons.

“The Shermans live next door to me, the Bolducs live kitty-corner from me, Carson Patrick might as well live in our neighborhood. All of these guys are over all the time,” coach Bowen said.

“I’ve watched these kids literally grow up in my backyard,” he added. “We’ve been looking forward to this, we talked about it all summer how excited we were to have an opportunity to coach this team and how much fun this was going to be this year. It’s nice to have a chance to continue it.”

For Wally Dow, it’s extra special this year because he’s a former Greenwich standout himself, as the Witches’ starting quarterback in the mid-’90s. He noted that Greenwich assistant coach Brian Davis was his center in high school.

“It’s awesome that Greenwich is doing as well,” Wally Dow said. “There’s nothing I’d like to see more than both of us hopefully win state championships. I still have a lot of friends over there, a lot of the coaches there were either coaches I had or guys that I played with. I’m rooting for them hard.”

“We’ve been rooting hard for Schuylerville,” Mike Conlin said. “The kids all know each other from playing sports, they’re only five miles down the road. Matthew has played basketball with Lukas Sherman, he’s played baseball with a number of Schuylerville kids. There’s a good relationship between the two towns.”

A big second half lifted Moriah to a 28-14 victory over Greenwich in a Class D state football semifinal on Friday at Faller Field.

Our preview of Saturday's state football semifinal between Schuylerville and Dobbs Ferry.

Schuylerville punched its ticket to the Carrier Dome with a lopsided state semifinal victory on Saturday.

Greenwich football players pose with their dads after Tuesday's football practice at the high school. Pictured are, from left, Gavin Blair and his dad, Don; Kadyn MacNeil and dad, K.C.; Colin Hughes and dad, Pete; Matt Conlin and dad, Mike; Aidan McPhail and dad, Todd; and Jesse Kuzmich and dad, Brian. All of the current players' dads played for Greenwich in the late 1980s and 1990s.