GLENS FALLS — It’s a feeling all too familiar to Arleen Girard.

Her son, Glens Falls senior Joseph Girard III, has had a lot of these moments — seven, to be exact — when he is honored for a career scoring achievement.

She loves and appreciates each milestone her first and only son reaches. Every trophy or ball he’s ever earned sits in their family living room, hidden behind long white wooden cabinet doors, but can be seen in plain sight upon request.

Eventually, that historic ball, which Joseph sank in a ragged 78-74 win over Amsterdam at Cool Insuring Arena on Sunday, will join the 1,000th point ball, 2,000th, the school record ball, Section II record and of course, the unprecedented state record and 3,000 ball.

“It has been exciting,” Arleen Girard said Sunday morning. “Everyone asks if I ever thought it would get to this point, way back when and you don’t realize it until you are in it. Because he is a very humble kid, even at home. We are not here boasting about things.

“He just wants to win and he worries about who he is playing next,” she added. “But it truly has been a wonderful ride. I know he has the confidence to go out there and win and that drive has gotten him to where he is today.”

Seven times Joseph has been honored for achievements most kids fantasize of and adults wonder “what-if” about.

However, point 4,000 was the roughest. It took every ounce of Joseph Girard III’s will to not only hit the 29 points he needed Sunday, but to pull out a win against an Amsterdam team that threw the kitchen sink at him defensively.

Girard struggled much of the first half as the Rams applied a full-court press on the Indians and often threw three players at the Syracuse-commit.

It took 15 made free throws, 52 points and a bunch of bruises he’ll see tomorrow, to edge out a team the Indians beat by 36 in December.

“I’m dead,” Girard III said after the game. “We had three games in five days. We had the Senior Ball last night until 12. So there has just been a lot going on this week.”

Still, none of the distractions kept him from reaching his final individual commemorative high school moment.

When Joseph nailed a free throw with 2:39 to play in the third, the game was stopped and his family gathered on the once Civic Center floor to hug him.

It was a poetic culmination celebrating years of sacrifice few except them see.

Arleen held back tears, while dad, Joe Jr., stood stoic and proud, as he always does.

Sporting a custom JG3 black T-shirt on Sunday, Arleen is the quiet type most game days.

She sits and enjoys her son’s competitions, like any mom would, while maintaining a sense of peace about her, regardless of what transpires on court.

That could be where Joseph gets his natural composure from. Though Arleen admits that sometimes it is her son that teaches her new things about herself.

“He has these goals that he sets for himself, quietly,” she said. “And he reaches them quietly. He knows what he has to do, so I know what is going on in the back of his mind, so I quietly follow him.”

Long before Joseph became a basketball-lifer, Arleen played volleyball and softball at Glens Falls. She admits that her son naturally converted her into a college basketball fan.

“Now, I find myself sitting down and getting excited when college basketball is on. But I know about the sport, don’t I?” Arleen asked her son prior to Sunday’s game.

“A little bit,” Joseph responded while sitting on the couch before his mom playfully gave him a push.

A fun moment between mother and son, six hours before Joseph prepared for his final game against league opponent Amsterdam.

Though it feels like Joseph has been wearing red and white forever, he is no exception.

First, it was his final football game, which ended in a Class B state championship, with him at quarterback. Later this year, he’ll inevitably take the court as a high school athlete for a final time.

Off the court, Girard is experiencing several ends as well.

JG3 sported a blue suit with an orange tie, of course.

For a kid that missed the prom last year because he was busy playing AAU, Senior Ball on Saturday meant a lot to both him and Arleen.

But beginnings always hide themselves in ends, and for Girard and the Indians, this could be the beginning of another Glens Falls state championship run.

And if it isn’t, then Arleen is just proud of her boy, who is now known by something other than JG3.

NBA plans to start the new season in October 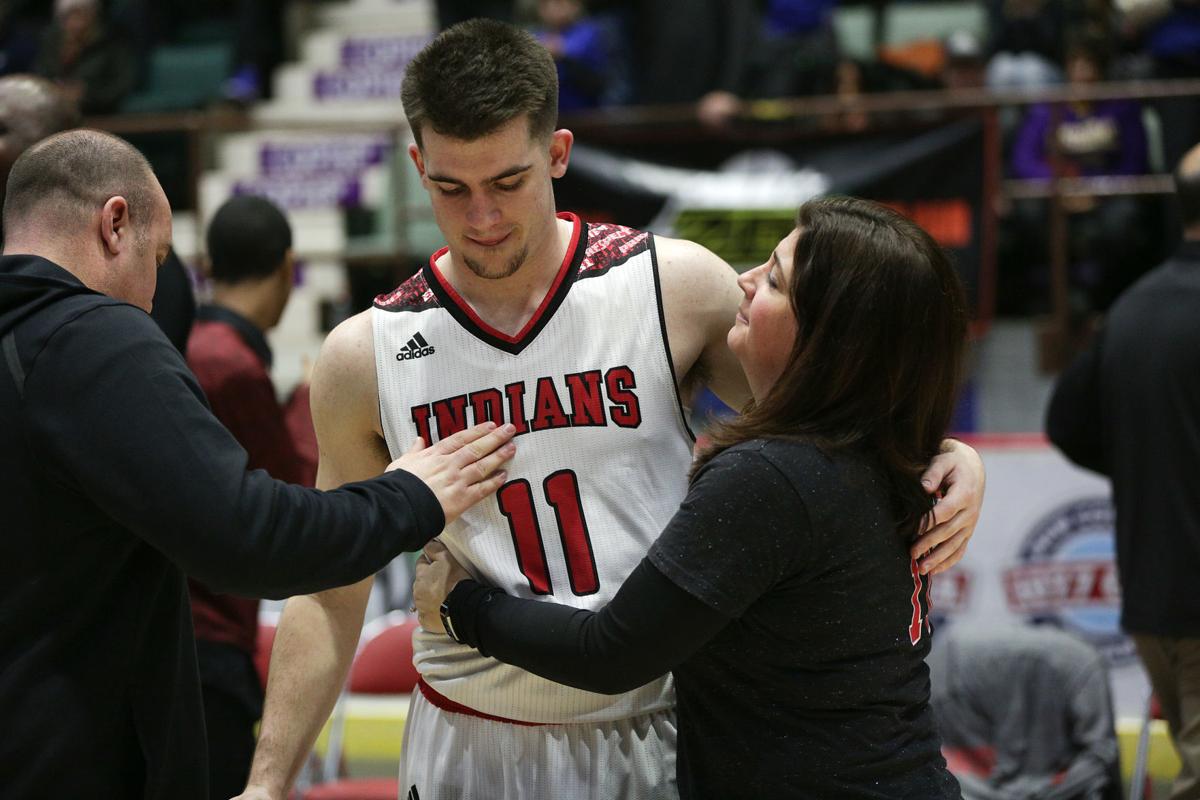 Joseph Girard III of Glens Falls is greeted by his parents after scoring his 4,000 point Sunday at Cool Insuring Arena. 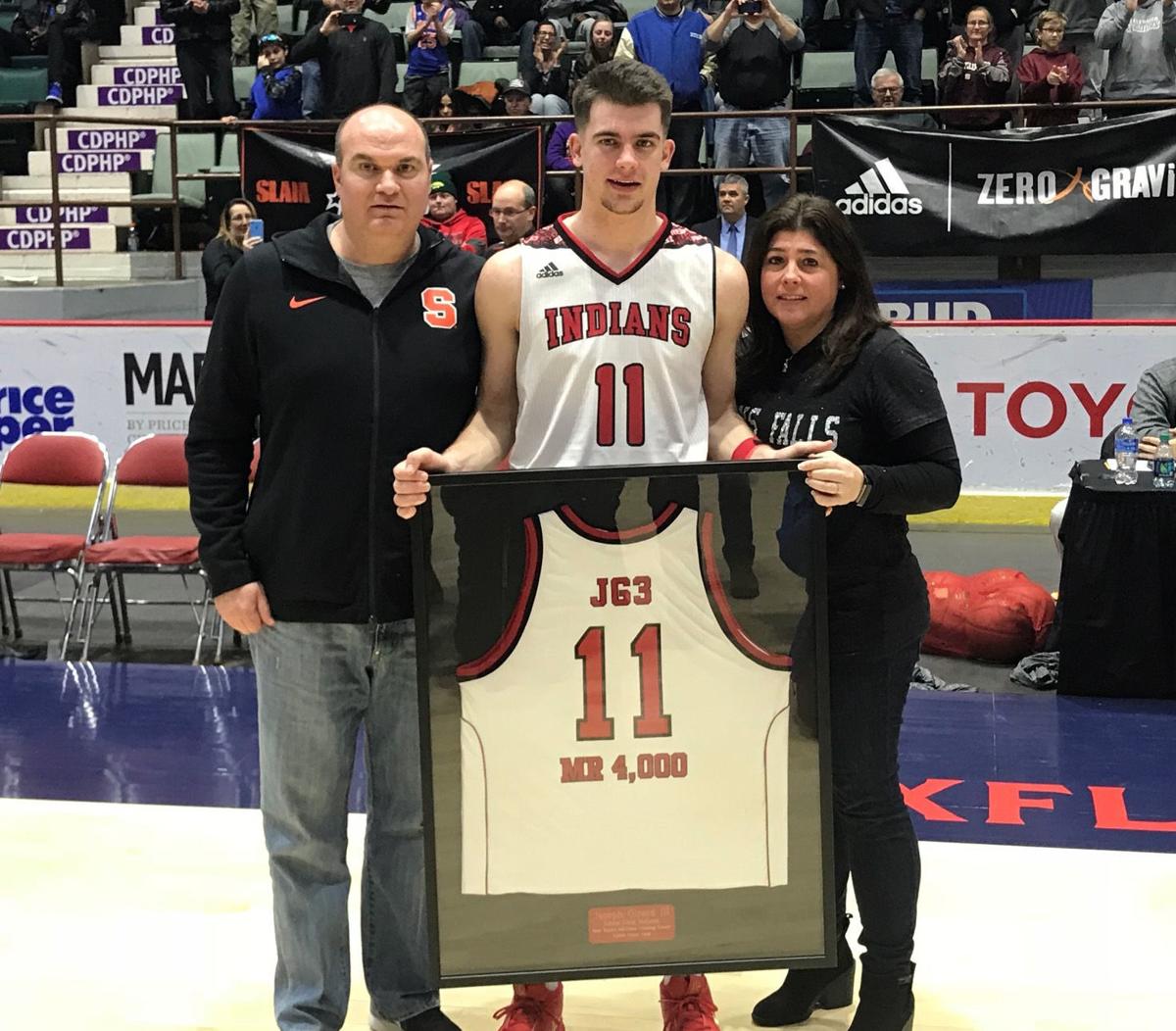 Joseph Girard III poses with his parents and a jersey awarded to him after scoring his 4,000th point Sunday night.