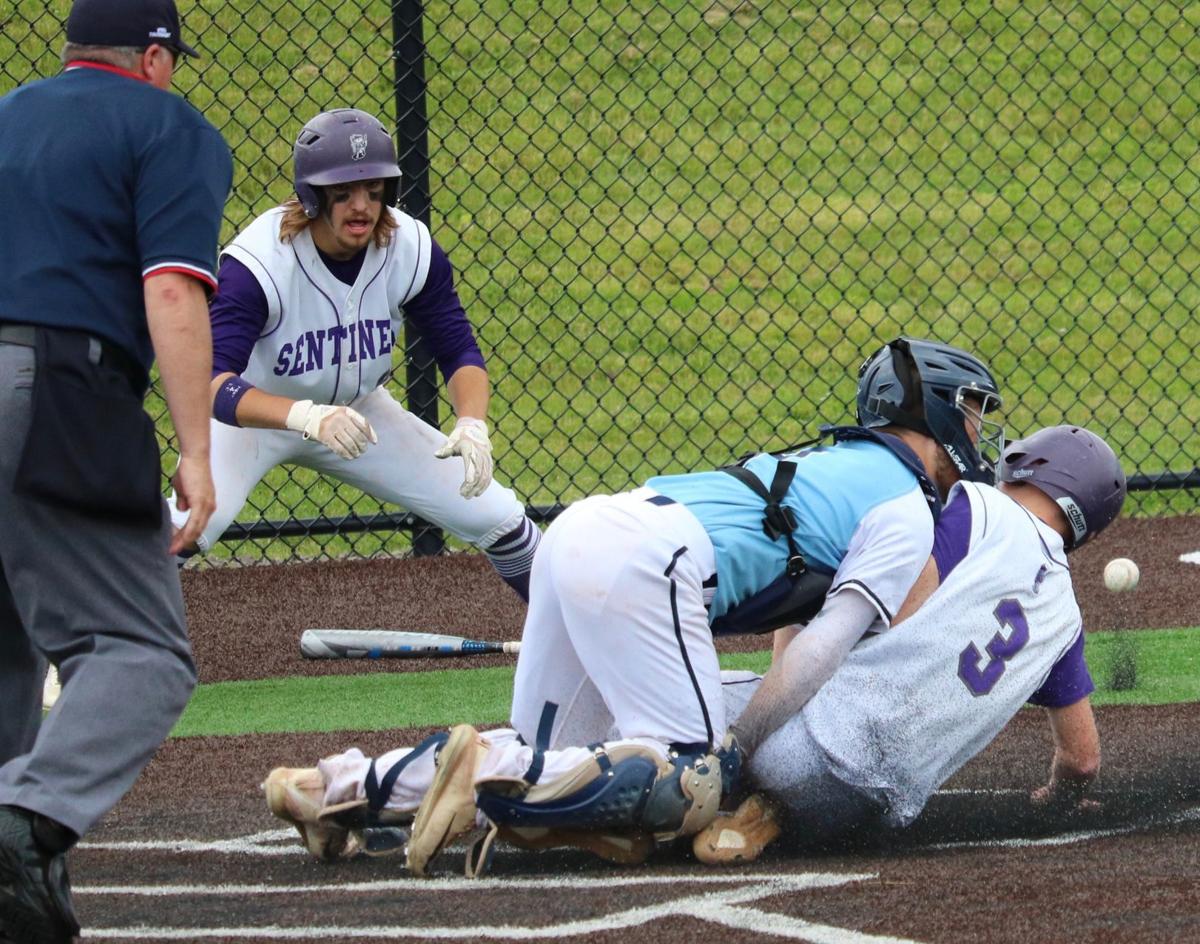 Ticonderoga's Jack Grinnell (3) scores on a play at the plate under Gananda catcher Jayden Castrechini during the third inning of Friday's Class C semifinal of the State Baseball Tournament at Maine-Endwell High School. Ti's Bryce Gautreau looks on at left. The Sentinels defeated Gananda 3-1 in the game. 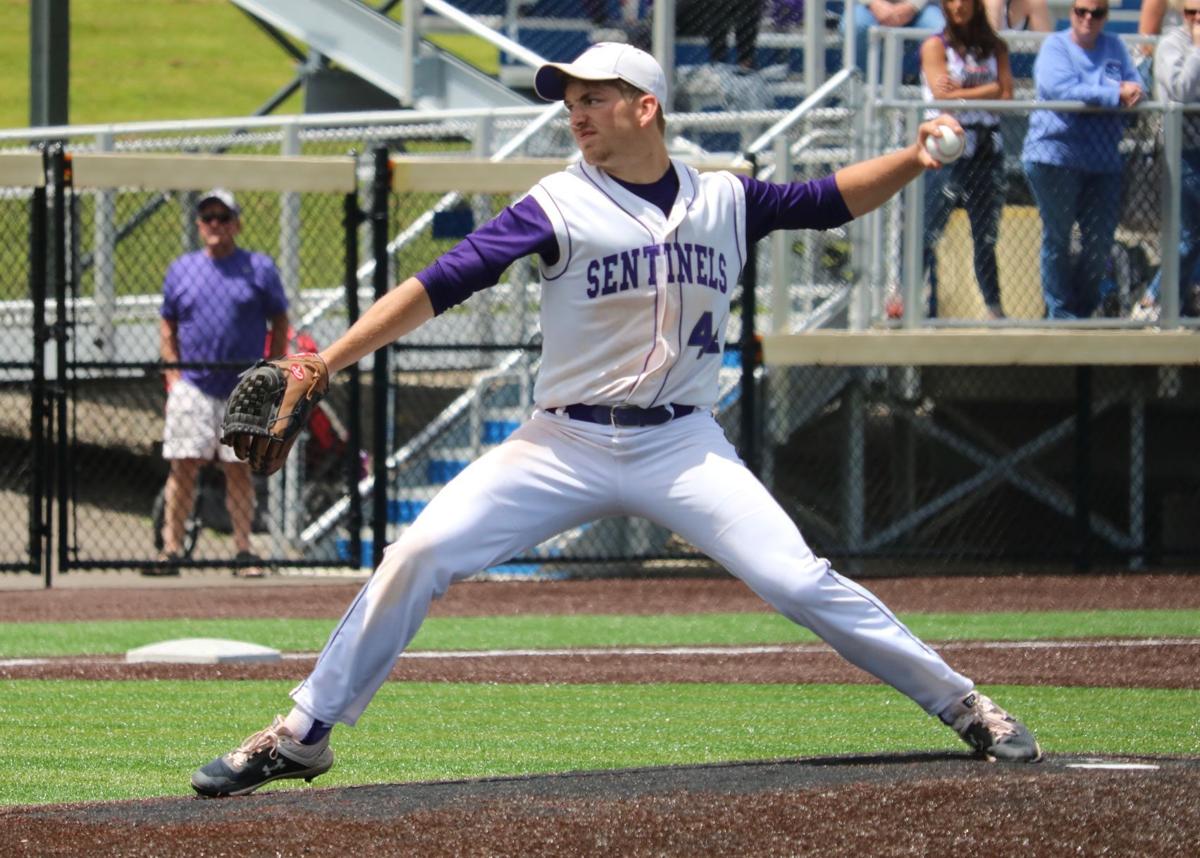 Ticonderoga senior Russell Gallo III winds up to deliver a pitch to a Gananda batter during Friday's Class C semifinal of the State Baseball Tournament. Gallo picked up the win in the Sentinels' 3-1 victory.

ENDWELL — Behind a gem from senior ace Russell Gallo III and clutch hitting from batterymate Jack Grinnell, Ticonderoga is back in the state championship game.

Gallo went the distance in his final varsity pitching start and Grinnell broke a tie late with a two-out, two-run double Friday to lead the Sentinels past Gananda, 3-1, in a Class C semifinal of the State Baseball Tournament at Maine-Endwell High School.

Top-ranked Ticonderoga (18-2) will take on Section III’s Cooperstown for the state title Saturday at 4 p.m. at Binghamton University. The Sentinels suffered a 6-5 extra-inning loss to Avon in last year’s final.

“It feels really good to go back,” Gallo said. “We just have to finish it this year.”

Grinnell went 3-for-3 — all of Ticonderoga’s hits — and reached base safely in all four trips, but his biggest blow came in the sixth inning with the game knotted at 1-all.

After Terrence Benedict drew a walk to lead off the inning — one he worked after the ump determined that he leaned into a pitch during the at-bat — Gananda took out Canisius-bound senior Tim McClare and went to sophomore Pat Walsh.

The lefty Walsh struck out two looking, but hit a batter to put runners on first and second. Grinnell followed with a deep drive over the left fielder for a 3-1 lead.

The senior catcher thought he hit it off the end of his bat for a pop-out to left.

“Then I saw it start to carry,” Grinnell said. “When I got to second, it hit me that everyone scored.”

Gallo struck out the side in the seventh to finish off the Blue Panthers.

“Russ keeps showing us day in and day out why he’s our workhorse and he can go through anything,” Grinnell said.

Grinnell, who threw out two baserunners — giving him three in the last two games — was also responsible for tying the score in the third inning on a heads-up play after leading off with a double.

With two outs, Michael DuShane hit a grounder to short and was called safe at first after the ump determined the first baseman did not have his foot on the bag.

Grinnell rounded third, and in the confusion noticed the catcher wasn’t near the plate.

“He was probably 10 feet off and he wasn’t looking at me,” Grinnell said. “I just took off and I went for it, and I beat it there, thankfully.”

“I didn’t send him — he did that all on his own, and that’s a huge play,” Dorsett said. “He’s a gamer and he’s instinctive.”

Fourth-ranked Gananda (19-4), out of Section V, wasted little time putting the first run on the board in the first inning. Jayden Castrechini hit a deep drive over a leaping attempt from the center fielder and made it all the way home for the early lead.

Any worry Dorsett had was erased when Ticonderoga put two on in the bottom of the frame and was a close play at first away from tying it up against McClare.

“We bounced right back,” Dorsett said. “We didn’t score, but it was a tough inning and we did what we needed to do.”

Ticonderoga’s defense maintained the tie in the fifth on a quick recovery play after right fielder Dillon Schlogl dropped a fly ball from Gananda’s Christian Clarq. Schlogl scooped up the ball, hit the cutoff and the relay throw made it to DuShane, who tagged out Clarq after he slid past third base.

“It was a good team play all-around, because Nick (Robarge-Greene) threw a good cut and Michael keeping the tag on and not giving up on the play was huge, too,” Dorsett said.

Ticonderoga will be unable to pitch Gallo on Saturday due his pitch count from Friday. Dorsett said he was still deciding his approach for pitching. DuShane started last year’s championship game. Dorsett said he could opt for a committee approach.

“(DuShane) has the most experience, but Bryce (Gautreau) can pitch, Terrence can pitch, (Conall) Tierney can pitch,” Dorsett said.

“We’re all going to come in with a chip on our shoulder,” Grinnell said.

Three for three: Schuylerville, Ticonderoga and Whitehall to play for state baseball titles on Saturday

Ticonderoga's Jack Grinnell (3) scores on a play at the plate under Gananda catcher Jayden Castrechini during the third inning of Friday's Class C semifinal of the State Baseball Tournament at Maine-Endwell High School. Ti's Bryce Gautreau looks on at left. The Sentinels defeated Gananda 3-1 in the game.

Ticonderoga senior Russell Gallo III winds up to deliver a pitch to a Gananda batter during Friday's Class C semifinal of the State Baseball Tournament. Gallo picked up the win in the Sentinels' 3-1 victory.