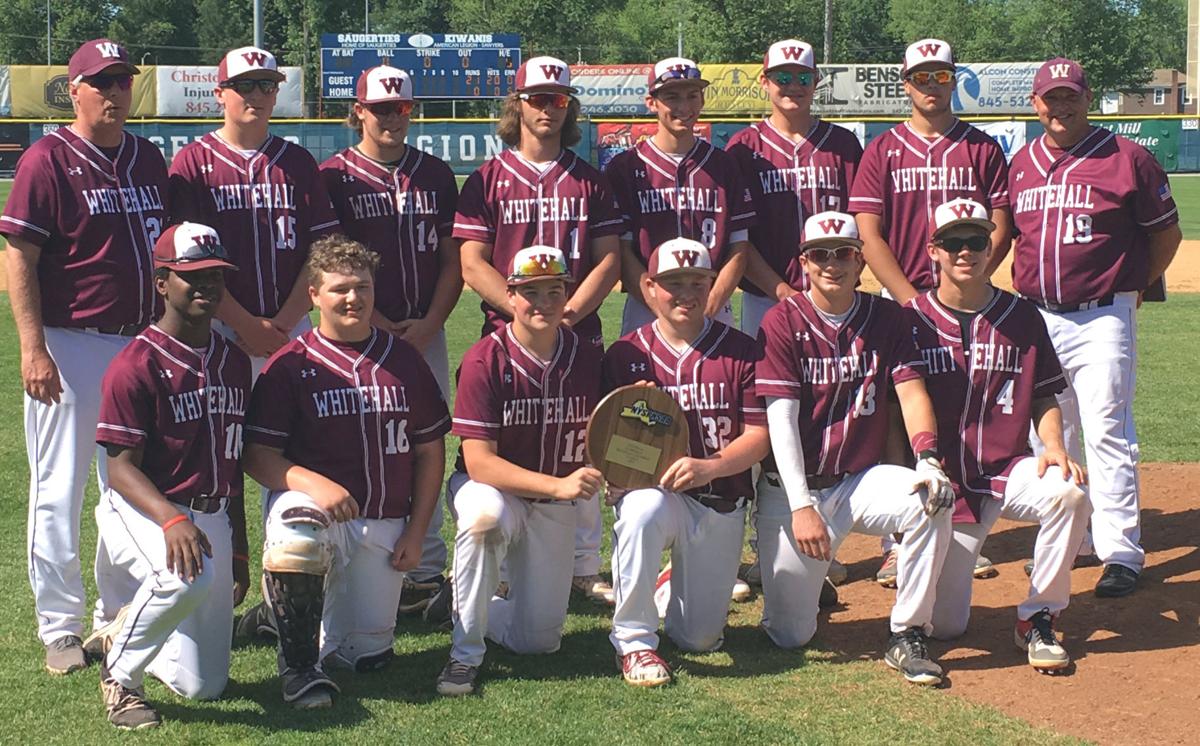 Then, finally and forcefully, the Railroaders delivered it to Livingston Manor. Preaching patience, Whitehall made up for two innings of chasing slow, high pitches by scoring 19 runs in the third Saturday. The final result was a 21-0 win in five innings due to the mercy rule, in the Class D regional final at Cantine Field. Ethan Patch struck out 14 and allowed no hits in his five innings.

The Railroaders (15-2) play the South Kortright in a state semifinal at 5 p.m. Friday at MacArthur Park in Binghamton. The championship game is the next day.

Whitehall had seen Livingston Manor starting pitcher, James Krupp, in the Wildcats’ sectional final victory, so they knew he didn’t have much speed on his pitches.

“Sometimes when you don’t face that, you can struggle hitting it, and we did the first two innings,” said Redmond, who yelled for patience in the top of the second inning. “We were swinging at some pitches that were high, and the only thing you can do is pop the ball up on the infield. Then we made the adjustment by staying back in the box and be patient, let the ball travel to you.”

The Railroaders’ explosive third inning started with leadoff hitter Jake Moore’s single up the middle. He stole second and moved to third on a balk. Austin Barnao reached first on an error, which scored Moore and the floodgates opened.

By the end of it, there were 12 Whitehall hits, four Livingston Manor errors and two Wildcats pitching changes. Among the notable strokes of the bat were Thomas Fish’s RBI triple, two successful squeezes by Brandon Bakerian and Tyler Shattuck, two-run singles from Moore and Barnao, RBI doubles from Patch and Tyler Fish and Barnao’s three-run double.

“Once we got through the first nine batters, after that we just started to hit the ball better,” Thomas Fish said. “You definitely have to have a lot of adjustment to it.”

The Whitehall hitters not only needed to be patient at the plate — and the two relievers had similar speed as Krupp and more control issues — but Patch had to be patient in waiting his turn to pitch again. He took the pleasant delay of the top of the third inning in stride. Ironically, the only player he didn’t strike out nearly ruined his shortened no-hitter, but a spectacular defensive play by Barnao at shortstop kept it alive two batters into the lineup.

Krupp hit a deep grounder to Barnao’s left. He backhanded the ball, going to his knees in the process, and threw out Krupp in that position by a half-step.

“Being able to have my team behind my back helped me,” Patch said. “Austin made a real good play over at short in the first inning, and then the bats came alive. Hopefully this will show we’re worthy of being the number one team in the state.”

“I can’t say enough about Ethan,” Redmond said. “He was super on the mound today. That’s what you’re fearful of: when you’ve got to sit for almost an hour and then go back out there and throw, but he did well.”

Shattuck and Barnao added RBI singles in the fourth to make it 21-0.

“These kids woke up ready and dangerous to play baseball,” Redmond said. “They knew, they got that feeling. And one through nine hitters, they all got the ball in play for us.”

ALBANY — Drawing first blood is something the Ticonderoga baseball team talks about often.

ALBANY — Before the questions came, Darrin Renner had a question.

MIDDLETOWN — Greenwich’s Lucia D’Acchille was the top area finisher Saturday at the State Track and Field Championships at Faller Field. She p…

Fort Ann may have a less-experienced team this season, but few softball programs have as much state-level experience as the Cardinals.

TROY — It’s a new hat on top of Austin Barnao’s head this season, but there’s nothing old hat about winning a sectional title.

SARATOGA SPRINGS — If cars could avoid rust like the Whitehall baseball team does, it might change the industry.

GLENS FALLS — While the Whitehall baseball team has been rolling into the state playoffs, two former Railroaders are continuing their careers …

Whitehall out to prove it's ready for state title