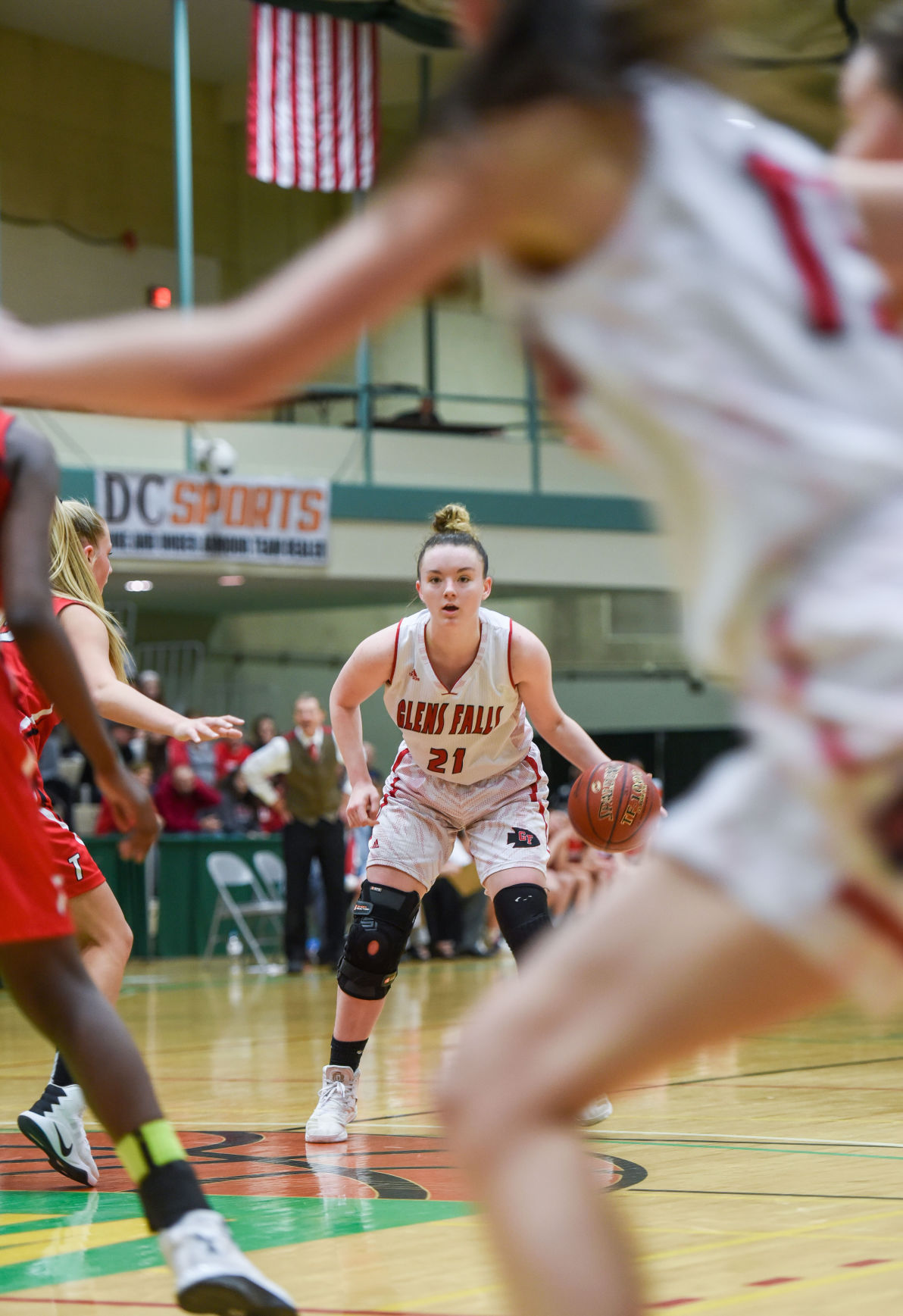 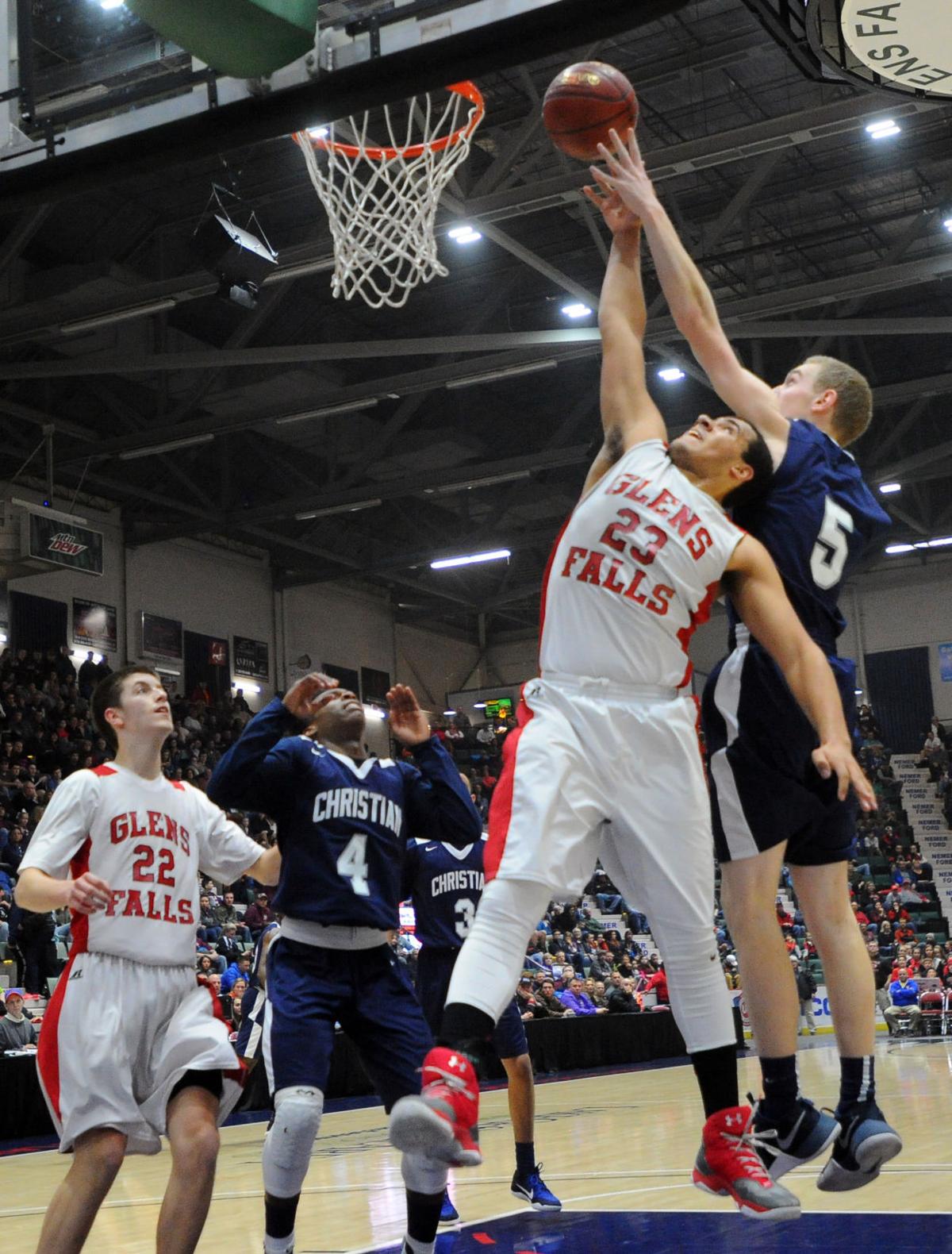 Three buses and an assortment of cars will head north from Glens Falls High School Tuesday afternoon with a single destination.

In a rare regional doubleheader, the Glens Falls boys and girls basketball teams head north Tuesday for the Class B regional semifinals at Potsdam State.

Both teams face Section X champion Canton. The girls play at 6 p.m., followed by the boys at 7:45. The Indians boys are undefeated at 24-0 and ranked No. 1 in the state, while the girls are 21-2 and ranked fourth in the state.

Glens Falls athletic director Chip Corlew said the teams will make the three-hour journey to Potsdam on separate Section II charter buses. Another bus for cheerleaders is making the drive, and Corlew said there were about 30 extra seats for students. He also expected a large number of local fans will make the trip.

“I think we’ll travel pretty well with both teams playing up there,” Corlew said. “We’re hoping for a big crowd.”

The Glens Falls and Canton girls and boys teams played a doubleheader at Glens Falls High School on Dec. 3, with the Indians sweeping both games — the girls won 53-44, and the boys won 64-54.

“That was our first game of the year,” Glens Falls boys coach Rob Girard said. “We had four days of practice — we were just coming off the state football championship, so we were definitely rusty, and they weren’t up to full strength either. It might as well have been a scrimmage.”

The Canton boys (19-5), ranked 23rd in the state, won the overall Section X championship Friday for the first time since 1996, beating Harrisville 66-48 behind 23 points from freshman Andy Downs and 18 from Declan Porter. A week earlier, the Bears beat Ogdensburg Free Academy 62-56, using a 21-0 run as they rallied from an 18-point deficit to win their Class B title.

The Glens Falls boys are powered by 6-foot-1 sophomore guard Joseph Girard III, who is averaging 36.3 points per game with 115 3-pointers, leading Section II in both categories. Forward Tony Green averages 15.7 ppg, and Dylan Balcom, Andrew Stamatel and Greyson Brady round out the starting lineup.

The Indians are coming off a hard-fought 60-55 win over Mekeel Christian for their first Section II title since 2007, when Jimmer Fredette was a senior.

“We’re looking at it as they’ve gotten a lot better, but so have we,” Rob Girard said. “We’ve told them to just worry about (Tuesday) — you can’t live on your laurels, you can’t look at the future, get the one in front of you.”

The Glens Falls girls are led by 6-foot sophomore forward Sophie Tougas, who is averaging 18 ppg with 68 3-pointers. Her sister, Lucy, is a 5-10 senior guard who averages 10.7 ppg. Other starters are Taylor Scarincio, Caitlin Hogan and Emilie Moses.

The Indians used a 14-0 run in the third and fourth quarters to pull away to a 50-38 victory over Tamarac on Saturday for their second straight Section II championship. Glens Falls lost to Northeastern Clinton in the regional semifinals last year.

The Canton girls (16-6), ranked 25th in the state, defeated Ogdensburg 59-37 for the Class B title, but lost to Madrid-Waddington 47-43 in the overall Section X playoffs.

“It’s nice that we played them already, so we have some tape on them, we’re familiar with them,” said Glens Falls coach Mark Girard, whose team played Canton in its second game of the season. “Obviously, we’re a better team now, but I’m sure they are, too.”

Winners: Play in regional finals on Saturday at Plattsburgh State.

Where Are They Now: 2002-03 Argyle cross country teams

The Argyle girls cross country teams won state titles and attracted national attention in 2002 and 2003, but were disbanded by the spring of 2003. Catch up with coach Bob Lane and several members of the team in our latest Where Are They Now story.

Baseball back at East Field, with a pandemic look

The Glens Falls Independents are poised to bring collegiate-level baseball back to East Field this summer, amid the coronavirus pandemic.

The Calder Cup championship game in 1989 was one of sports editor Ken Tingley's first games covering the Wings. He had been in Glens Falls only eight months.

Columnist Ken Tingley still misses those winter chats with one of baseball's most memorable characters.

NASCAR will move its August road course race from Watkins Glen in upstate New York because of state health restrictions, and will run at Daytona instead.

FLASHBACK: They never believed they could lose

Our weekly roundup of local golf results from the past week.

One player carried an extra burden when Glens Falls' boys basketball team played in the sectional semifinals in 1999.