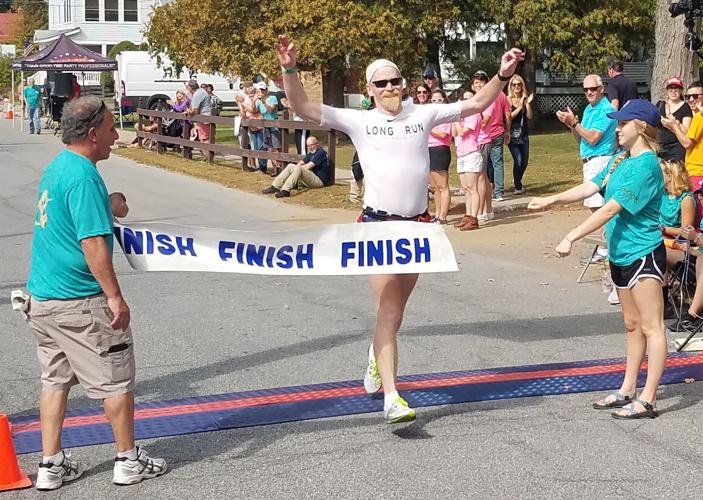 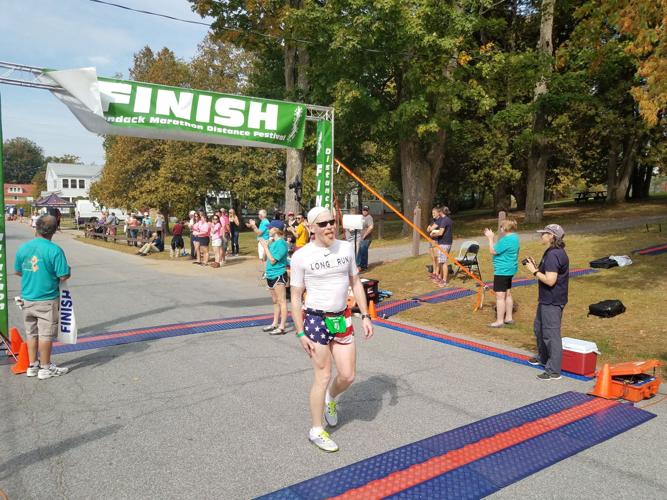 Marc Galvin, 43, of Lake Placid, finished in first place in the Adirondack Marathon Distance Festival in 3:05:45.

But Galvin wasn’t about to look back.

The 43-year-old from Lake Placid felt that would break his momentum.

Instead, Galvin dug down deep and kept pushing forward.

The race is a qualifier for both the New York Marathon (Nov. 3) and the Boston Marathon (April 20).

“I saw a friend of mine who is a New York State trooper and he asked if anybody was in front of me and I said that I didn’t think so,” said Galvin, who was competing in the event for the second time. “Then, Bobby (Ebel) caught up to me at (mile) 22. I had to make a move at some point. I heard him coming back on me and had to go. This was a fun one to win because these guys (wife Sarah and daughter Norah) were here.”

Clad in his American stars and stripes shorts that he’s worn in road races since he was a sophomore in high school, Galvin figured this might be the last go-around with his good luck charm.

“The elastic is starting to wear out on them so I may have to retire them,” Galvin quipped.

Earlier this year, he battled through a sore Achilles heel that shelved him from running for a few weeks. The pain stemmed from walking around several miles in flip flops as a tourist in New York City.

Galvin had run the half-ironman competition in Lake Placid the previous two years, but choose to skip it this year to compete in this race. Despite finishing second in several marathons and having won the Lake Placid Classic on a couple of occasions, Galvin said he was still surprised to have won.

“I stuck to my plan,” Galvin said. “I ran an easy first half and then turned it on for the second half. It’s so hilly that if you run too hard then you suffer. And, I still suffered for the last few miles, but I was able to hold on.”

Galvin likened the terrain to running up Whiteface Mountain.

“There are legit climbs and you’re just grinding,” Galvin said. “It can wear on you. It’s one of the most challenging marathons that I’ve run. For me, it never got too hot because there was a nice breeze the whole time. For the first half of the course, it just feels peaceful out there and really fun to run.”

Pace Bears for half marathon runners were a new addition to this year’s 23rd edition of the race.

Josh Hummel, 30, of Middlebury, Vt., and Sarah Barnes, 44, of Madison, Vt., were teamed together from a running group based in Middlebury to run at a one hour and 50 minute pace in the half marathon. It was the first time each ran the course and gave pace bears a try.

“I thought it was wonderful,” Barnes said. “It was great to have somebody keeping me on task. It was really fun. It was a little bit of a learning curve. During the first two miles, we have to figure out the pacing. But once we got it, I thought we made a good team.”

“I’m more of a 1:30 guy when I race so the 1:50 is a very comfortable, relaxed pace,” Hummel said. “We took turns holding the sign. It wears you out. The kids (on the side of the course) were holding up cups of water and that might be more tiring work to hold up the cups of water.”

After Hummel crossed the finish line, he did something that he’s been doing for about 10 years now — a cartwheel.

“Life is full of obstacles and a few hills on a half marathon course generally are going to make you stronger than anything else,” Hummel said. “The cartwheel has been a tradition of mine. I just have a lot of energy finishing a race and that’s the only way that I can get it out.”

Sarah Correa, 28, of Citrus Heights, Calif., was first among females in the marathon at 3:27:05. Correa is originally from Niskayuna.

Jake Theut has overcome a lot to become the Adirondack Thunder's No. 1 goalie.

Marc Galvin, 43, of Lake Placid, finished in first place in the Adirondack Marathon Distance Festival in 3:05:45.