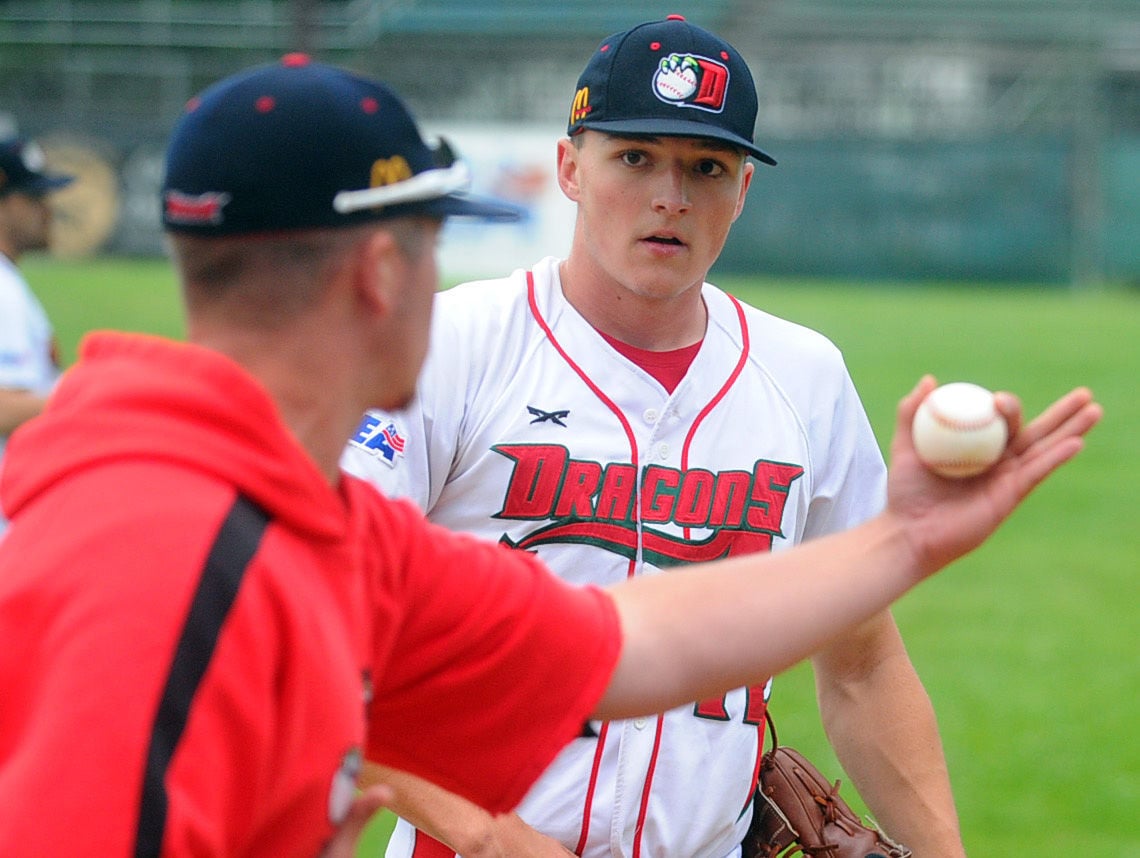 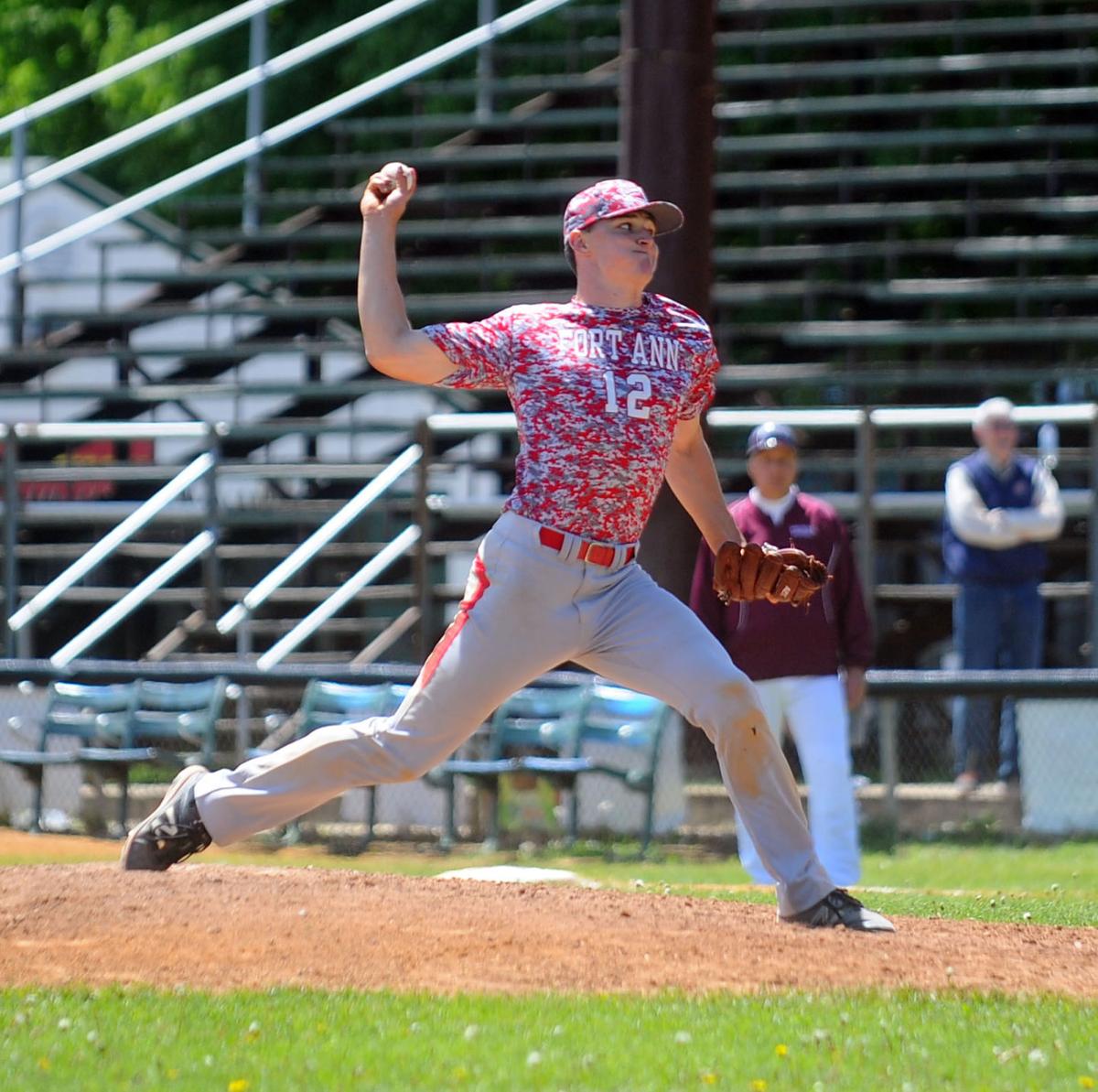 Fort Ann pitcher Tyler Mattison delivers a pitch during the May 20 Class D semifinal of the Section II Baseball Tournament at East Field.

GLENS FALLS — Tyler Mattison was an easy choice. Glens Falls Dragons coach Cameron Curler isn’t sure if Albany’s Nick Davey or Amsterdam’s Keith Griffin first mentioned the pitcher’s name, but he was the first suggestion for the PGCBL’s Prospects Game. And a unanimous decision.

Not bad for a 17-year-old who hasn’t even made it to college ball yet.

Mattison only graduated from Fort Ann a month ago. There’s enough of an age gap that he doesn’t understand all of his older teammates’ childhood pop culture references, never mind the college party references.

That’s why he’s playing with the Dragons this summer. Mattison is heading to Division I Bryant University in the fall, where coach Steve Owens likes to see his advanced incoming freshmen start early and get a leg up.

“If I didn’t do this, it would be an even bigger step up,” Mattison said. “It just really opened my eyes to how big the step up is from high school to college. I’m starting to figure a few things out: off-speed pitches are huge; you can’t rely on the fastball; and if you leave anything over the plate, it’s going to get hit hard somewhere.”

In high school, Mattison could just throw the ball hard. He had enough speed that a fastball could get by most batters. That doesn’t cut it in college ball. Mattison learned that lesson quickly, when he didn’t have much off-speed in his first game. He made out pretty well the first time through the lineup, but on the second they started figuring him out. Since then, Mattison has improved his change-up and developed more of a breaking ball.

“It’s impressive that he’s had a little bit more in his repertoire every time he’s come out,” Curler said. “He’s developing those pitches to the point they’ve been effective for him.”

It comes down to learning to pitch, not just throw the ball over the plate. Mattison is figuring out not just what to throw, but when, how and where to throw it.

He knows he needs to get better. That’s what sticks out to Dragons teammate James Varela. Early on, Curler told Mattison to pay attention to Varela (someone he says knows how to take care of his arm and knows the art of pitching). Mattison has done just that, though all the pitchers have taken their youngest teammate in.

“As good as he is, which is better than most of the pitchers on this team, he still knows he’s not going to get away with the stuff he did in high school,” Varela said. “He’s really asking what he can get better at. It’s kind of hard to say because most of us aren’t better than him.”

In high school, Mattison got frustrated any time a ball was put in play. Now, he sees it as a good thing. If a batter grounds out early in an at-bat, it saves Mattison’s arm, compared to a nine-pitch strikeout. He also had to get used to giving up more hits than he ever gave up in high school. There’s a reason a no-hitter is so special, and also why pitchers are judged by the runs they allow more than the hits.

“I gave up my first home run in Utica and I was just like, ‘Wow, this sucks,’ ” he said. “I had never given one up. Just being out there on the mound, I was like, ‘This is really lonely.’ ”

Pitching coach Austin Sleek is living with the Mattison family this summer (by coincidence, not some plan to help the youngest pitcher learn more) and Mattison peppers him with questions. That he remembers details from each inning, whether or not he was playing, struck Sleek, who said that’s exactly what you want from a college player.

Owens, the Bryant coach, has been following Mattison (and all of his players) closely. When they talked after Mattison’s first outing, the pitcher was already saying, “I’ll do this next time instead.”

“He competes at the highest level,” Owens said. “He has a great body and a lot of great physical tools and his demeanor is awesome. He’s very motivated. He’s very humble. He keeps it even-keeled.”

Mattison is used to going from the mound to the batter’s box to the infield. The time off of being a full-time pitcher is new to him.

Owens loves that Mattison was not just a three-sport athlete, but a three-sport star. He led a quartet of strong seniors and was all-state in soccer, basketball and baseball, including being the Class D player of the year in baseball. That says a lot about an athlete. Now, Owens says it’s time to take the athleticism and turn him into a very good pitcher.

“I think he’s going to be a weekend starting pitcher for us as a freshman,” Owens said. “ I think he could be a highly drafted player.”

Saturday: Glens Falls swept a doubleheader against Mohawk Valley, 8-3 and 2-1, at East Field.

Queensbury pulls away from Ballston Spa

Zion Freeman rushed for 247 yards and four TDs as Queensbury pulled away to a 41-32 Class A football win over Ballston Spa on Friday night.

Luke Eichin scored the winning kick as Queensbury won the tie-breaking penalty kicks against South High after a 2-2 tie.

The schedule for Friday's sectional playoff games, as well as the high school football schedule.

Fort Ann pitcher Tyler Mattison delivers a pitch during the May 20 Class D semifinal of the Section II Baseball Tournament at East Field.