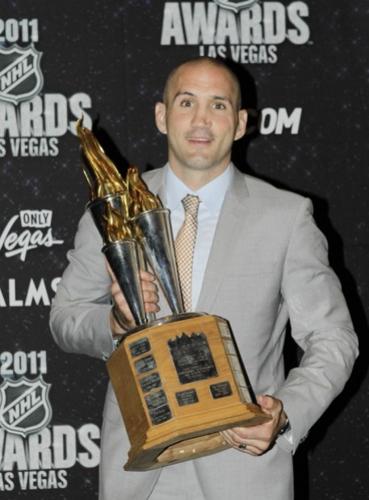 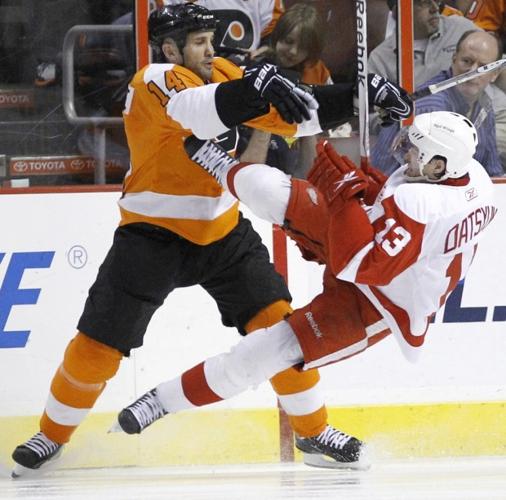 VOORHEES, N.J. -- A locker bearing Ian Laperriere's nameplate still stands at the Philadelphia Flyers' training facility. A stick of Old Spice deodorant sits on a shelf, a couple of hooks wait for a coat, and everything looks ready for him to gear up and take the ice.

Except the stall isn't in the Flyers' locker room. It's in a small office a long walk down a hallway and a couple of sharp turns away.

Not able to do the organization's work with his skates or his fists any longer, this is the place where Laperriere now toils on the Flyers' behalf.

Standing there on a recent afternoon, he pointed to a whiteboard on the wall with several names written in black marker.

"Nine guys," he said. "These are the future of the Phantoms right there."

Laperriere, who turns 38 this week, last played an NHL game for the Flyers in 2010. The choice wasn't his.

Laperriere blocked a slap shot with his face during a playoff game against the New Jersey Devils that year. The puck struck below his right eye, fracturing his orbital bone and bruising his brain.

The cut took nearly 70 stitches to close and Laperriere feared he lost his eye. Miraculously, he returned later in the playoffs, but the damage was done.

Post-concussion syndrome dogged him in training camp the following fall and he went on injured reserve for the entire 2010-11 season.

With it clear he would never play again, and this season still remaining on his contract, the Flyers asked him what he wanted to do to fill the time. Laperriere told them he wanted to work with the organization's youngest players.

They carved him a role as a mentor to the club's prospects.

"In my situation, the best would be to go out there and get to know those guys. Because it's a different generation. I don't know them. I'm 18 years older than these guys," Laperriere said. "If I want to explore the coaching part of it, well, I have a head start on anybody because I'll know those guys better than anyone else."

As one of his first on-the-job tasks, Laperriere came to Glens Falls in November of 2010 to speak with an Adirondack team that had just gone through a coaching change and had one of the worst records in league history.

If the Phantoms expected a scorch-the-paint-off-the-walls kind of speech, they didn't get it.

"It was a tough time for them. But I've been through tough times, too, in my career," Laperriere said. "I've always been on that positive side of it. At the end of the day, it's a game, and if you don't have fun out there it doesn't matter how hard you work. You won't win."

The meeting set a tone for his new job. While Laperriere works some with the players on-ice and ran prospect camp this summer, his greater responsibility is developing relationships with the guys away from the ice.

"Long gone are the days of the madman screaming at you and all over you," said Phantoms assistant coach Riley Cote, a former Flyers teammate of Laperriere. "I think there's a time and a place for that when there needs to be a fire lit under your butt, and he will do that. But it's more so being on an individual, personal level with these players."

Laperriere wants to be the guy that players can come to without fear; the person they can text or email when they're not getting playing time, having trouble with a teammate, or missing their families.

For many players beginning their pro careers at 19 or 20, the American Hockey League is the first time they've lived alone and had to worry about laundry, cooking, and avoiding the temptations that come with being a professional athlete.

When Phantoms defenseman Brandon Manning was going through a tough rehabilitation after hip surgery this summer, he talked to Laperriere about his frustration over missing the start of his rookie season.

"He helped me out realizing my health was first, not to worry about getting in and playing right away, just to get back to healthy and go from there," Manning said. "It really made me see things a little differently and just help me realize you have to take care of yourself before you get ahead of yourself and start worrying about other things."

Long regarded as one of the NHL's toughest players, he played more than 1,000 games and compiled nearly 2,000 penalty minutes with St. Louis, Los Angeles, Colorado and Philadelphia over 16 seasons. He scored more than 100 goals, but made his living killing penalties and doing the dirty work necessary to win hockey games.

"Lappy's proven himself throughout his career as a heart and soul guy, character guy," Cote said. "He was a role player. A couple years he had good numbers, but at the end of the day he was an up-and-down the wing grinder."

Without playing a game, Laperriere won last season's Masterton Award, which is given to the NHL player who best exemplifies the qualities of perseverance, sportsmanship and dedication to the sport.

His tough reputation belies an easygoing, positive personality that allows him to be a comforting force in young players' lives.

Laperriere is technically still on the Flyers' roster and his interactions with the prospects are as much peer as they are coach.

"He's like a father-figure in a way, but one of your teammates as well," said Phantoms forward Andrew Rowe, who trained with him over the summer. "He has nothing but good things to say about you. Because I haven't heard him say a bad thing about anyone."

In November, Laperriere called Rowe and Manning, nursing injuries in Philadelphia, and asked them to be his guests at a Foo Fighters concert at the Wells Fargo Center.

"He got us away from the rink, got us away from management and the coaches and everything to do with the Flyers and we just kind of had fun for the night," Manning said. "That's the kind of person he is."

Laperriere hasn't been to Glens Falls this season. His focus is on the nine names on his office wall. They are Flyers draft picks playing in junior hockey.

He's been to North Dakota already and is going to Seattle and Victoria, British Columbia later this month. The goal is to develop lasting relationships before they reach the AHL.

Once they're with Adirondack, Laperriere takes on a less formal role. Between Cote, development coach Derian Hatcher and roving assistant Kjell Sameulsson, there are layers of support. But the line to Laperriere remains open.

Laperriere wonders if too many voices can cause confusion, but Phantoms coach Joe Paterson believes it give players a better chance to find someone they can relate to.

"When you have a nucleus of management and coaches, different personalities get along with different people," Paterson said.

Despite playing just one season there, Laperriere is one of Philadelphia's most popular sports figures - "That's the way the fans are. If you bleed for them, they'll embrace you," he said - and has put down roots in the city.

But what lies beyond this season, the last of Laperriere's playing contract, hasn't been decided. He doesn't see himself stepping away from the game.

"I'm still young. I'm 38 soon and that's why I'm trying everything before I make a decision. That's why I don't say no to anything," Laperriere said. "Coaching is the closest thing you can get to the game. It's something that's inside of me. But we'll see. We'll see."

Aidan Stevens, the son of a former area sports star, will play for the Dragons at East Field this summer.

No Glens Falls-area teams drew a top seed for the Section II Baseball Tournament, but Fort Ann is seeded No. 2 in Class D.

Queensbury, Salem, Glens Falls and Whitehall are among the top seeds in the Section II Softball Tournament.