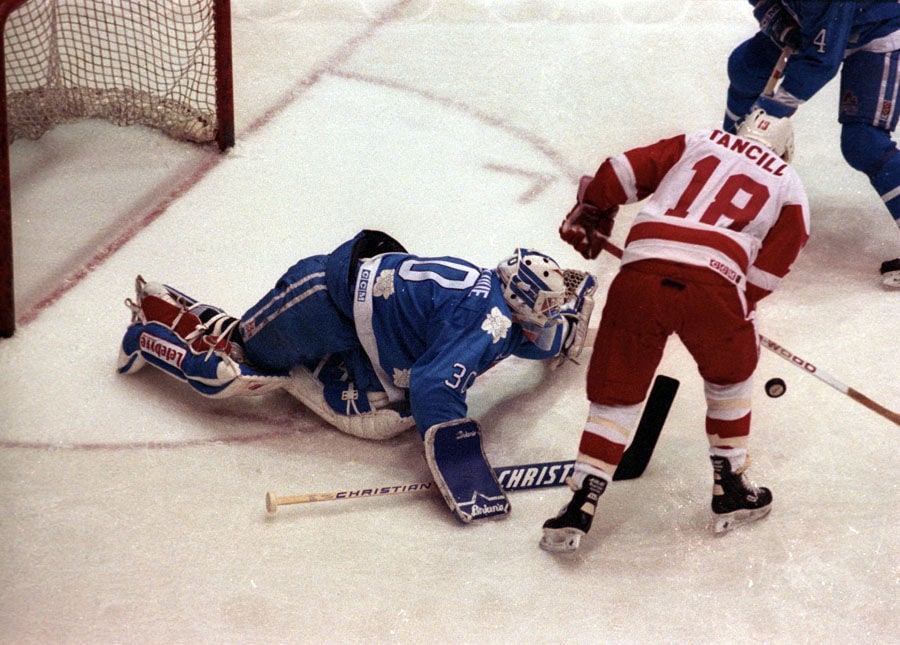 Chris Tancill tries to score for the Adirondack Red Wings during the 1991-92 season. 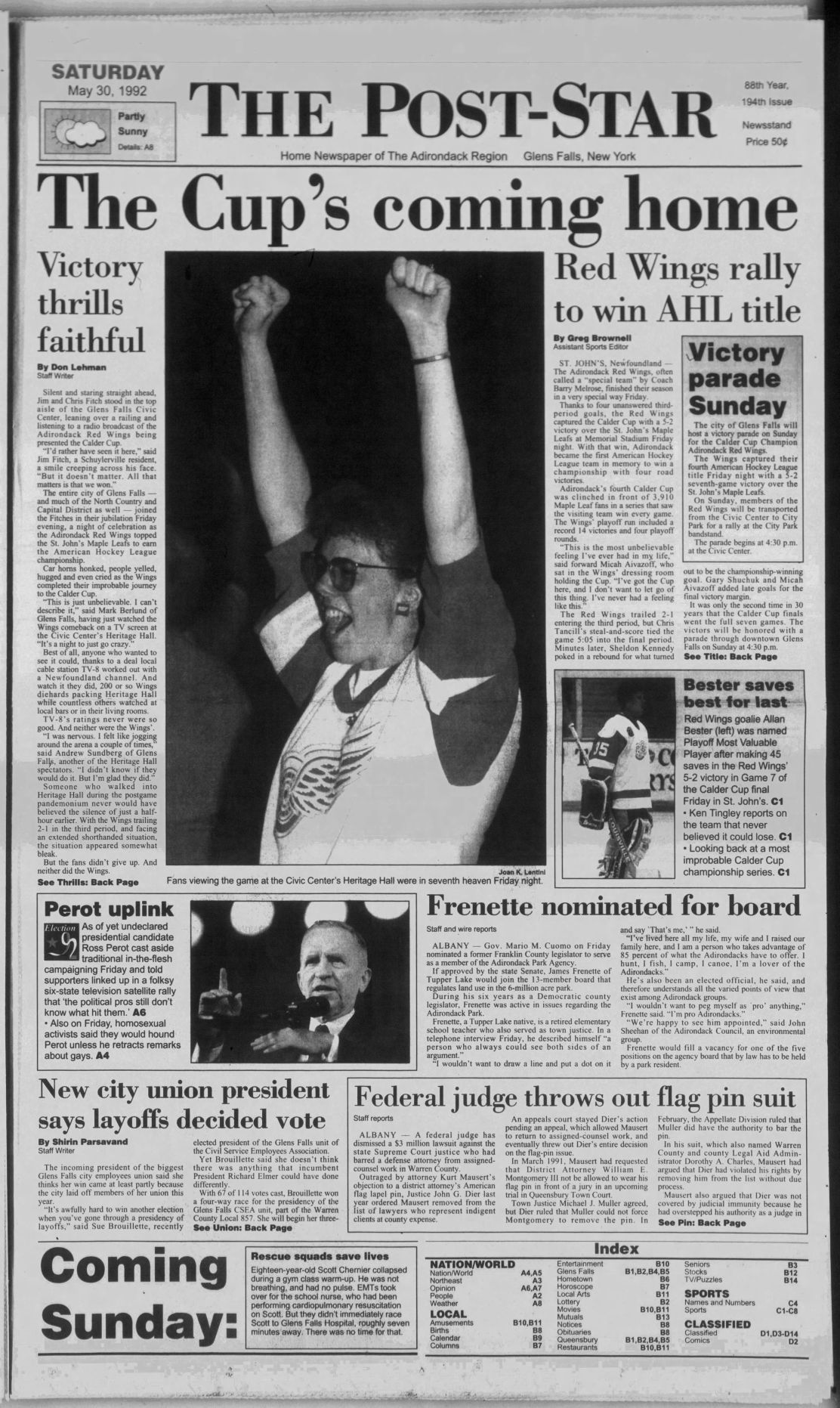 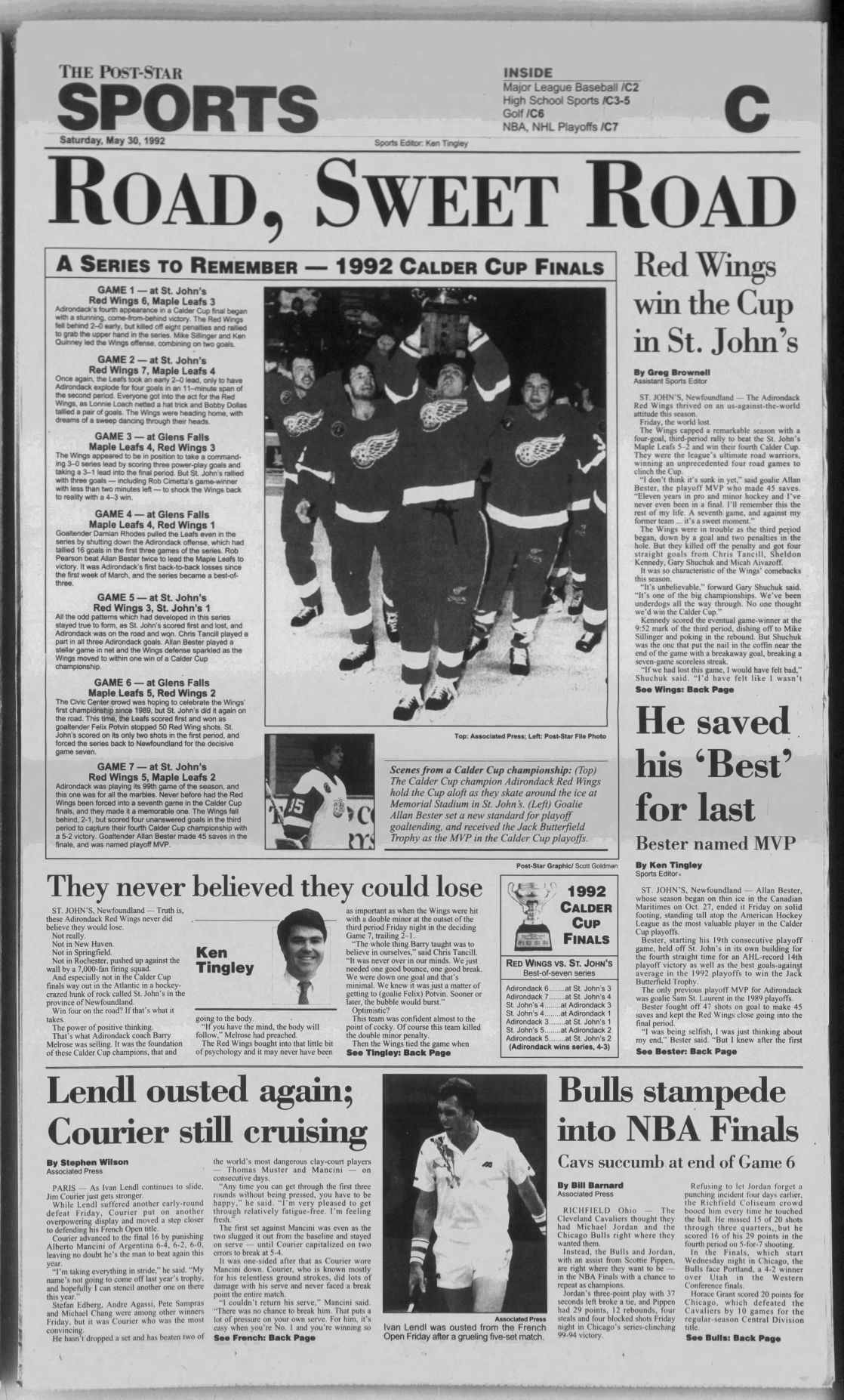 Post-Star editor Ken Tingley will be retiring on July 17. He spent his first 11 years at The Post-Star as sports editor. He has selected a few of his favorite sports columns to run over the next two weeks.

ST. JOHN’S, Newfoundland — Truth is, these Adirondack Red Wings never did believe they would lose.

Not in New Haven.

Not in Rochester, pushed up against the wall by a 7,000-fan firing squad.

And especially not in the Calder Cup finals way out in the Atlantic in a hockey-crazed hunk of rock called St. John’s in the province of Newfoundland.

Win four on the road? If that’s what it takes.

The power of positive thinking.

That’s what Adirondack coach Barry Melrose was selling. It was the foundation of these Calder Cup champions, that and going to the body.

“If you have the mind, the body will follow,” Melrose had preached.

The Red Wings bought into that little bit of psychology and it may never have been as important as when the Wings were hit with a double minor at the outset of the third period Friday night in the deciding Game 7, trailing 2-1.

“The whole thing Barry taught was to believe in ourselves,” said Chris Tancill. “It was never over in our minds. We just needed one good bounce, one good break. We were down one goal and that’s minimal. We knew it was just a matter of getting to (goalie Felix) Potvin. Sooner or later, the bubble would burst.”

This team was confident almost to the point of cocky. Of course this team killed the double minor penalty.

Then the Wings tied the game when Keith Primeau knocked the defenseman off the puck in the St. John’s end and the hard-luck Tancill waltzed in for the unassisted goal.

That set the stage for Sheldon Kennedy’s game-winning tap-in.

“We worked too hard for this to get away,” Gary Shuchuk said. “We had 20 guys who worked hard all year.”

Of course this team would win. Four times it scored in the final period to win 5-2 before another sold-out crowd at Memorial Stadium.

Off it went with the Cup.

Captain Chris Luongo passed the silver trophy to Shuchuk, then to Lonnie Loach. All of them got to hold it once. This was what the last two months had been all about.

Now, they were champions.

“We grew as a team, we jelled, we came together,” Luongo said, still carrying around that Instamatic camera he had used a day earlier on the plane. “There were a lot of one and two-goal games at the end of the season that we won that we wouldn’t have won earlier.”

And you know what? Those hockey crazies up in Newfoundland, they stayed for the whole thing, politely applauding a job well done. Why not? They were the only fans who got to see Adirondack at its best or at its “Bester” — as the signs in the Civic Center might say.

The Adirondack Red Wings were the best in the American Hockey League.

That was all that Melrose wanted all along.

“Barry was a prophet as far as that was concerned,” Luongo said. “He wanted us to be the best team going into the playoffs and that’s what we were.”

That was the goal.

That was the realization.

These guys weren’t like the front-runners in 1989. This team came out of the purgatory of mediocrity just to finish second. The defense didn’t come around until almost March, when Bobby Dollas climbed on board from Detroit. Goalie Allan Bester never settled in as the goaltender until the final weeks of the season.

The one constant was a physical, punishing playing style and a ton of penalty minutes.

“I won this thing when I was 25 with Sherbrooke,” Dollas said quietly. “I had come off a lot of winning teams and you kind of take it for granted. This one was a lot sweeter. Both these teams were road warriors. It was a great battle.”

That’s from a guy who when he first arrived would have much rather stayed with the big club.

“You know, maybe it was all for the best,” he said. “There’s a lot of people who have come to me since and said, `You’re one good defenseman.’ So maybe I proved something to some people.”

Melrose was the architect of this team. It was a team built not specifically on size, but rather size with speed.

In professional hockey, speed doesn’t kill without size, and when the playoffs came around, the Wings threw their weight around.

The rule of thumb was that no team would be able to stay with the Red Wings over a long seven-game series.

The St. John’s Maple Leafs took them the distance, right up until the final 15 minutes.

The Red Wings did it the hard way — as usual.

In the locker room, the champagne flowed and the tired Red Wings soaked up all of it.

Gary Shuchuk sat exhausted on a bench. Another player poured champagne over his head. This was the second ring for Shuchuk. He won an NCAA national championship ring at Wisconsin.

“This one is better,” Shuchuk said. “Because this was a seven-game battle. And in the NCAA, they didn’t let us have champagne in the locker room.”

With that, a shower of champagne came from every corner of the room.

Shuchuk loved every second of it.

Unlike the 1989 Calder Cup champs, I covered this team regularly. It is hard to forget the final trip to Newfoundland aboard the Detroit Red Wings' private jet — Red Wing One — and flying in over the ice bergs on the way into St. John’s. The game was special, too, with the Red Wings coming from a goal down in the third period to win.

My most vivid memory was being in the press box waiting for our Red Wings’ beat writer at the time and our current sports editor, Greg Brownell, to finish transmitting his story on the little Radio Shack device that was the state of the art technology at the time.

From the depths of the arena below, another sportswriter screamed that coach Barry Melrose was going to leave without us. Because of the time difference and the private jet, we were all back in Glens Falls by 11 p.m. where the sportswriters and team all spent the rest of the night at Dango’s, the local watering hole. I believe I also got to sip some beer out of the Cup.

Where Are They Now: A South High team that was recalled to sectional final

The South Glens Falls boys basketball team got an unexpected second chance at sectional glory in 1981.

No Adirondack League sports this fall; Foothills to play only low-risk sports

There's not much left to the fall high school sports season. The Foothills will play only low-risk sports while the Adirondack move its entire fall slate to the spring.

No Adirondack League sports this fall; Foothills to play only low-risk sports

There's not much left to the fall high school sports season. The Foothills will play only low-risk sports while the Adirondack move its entire fall slate to the spring.

The Wasaren League postponed its entire fall sports season until early spring on Monday. The Adirondack League is voting on what to do, while the Foothills Council appears ready to play.

The Wasaren League postponed its entire fall sports season until early spring on Monday. The Adirondack League is voting on what to do, while the Foothills Council appears ready to play.

Fall sports in the Foothills Council is awaiting a final decision by member school superintendents; an announcement is expected Wednesday.

Fall sports in the Foothills Council is awaiting a final decision by member school superintendents; an announcement is expected Wednesday.

Chris Tancill tries to score for the Adirondack Red Wings during the 1991-92 season.