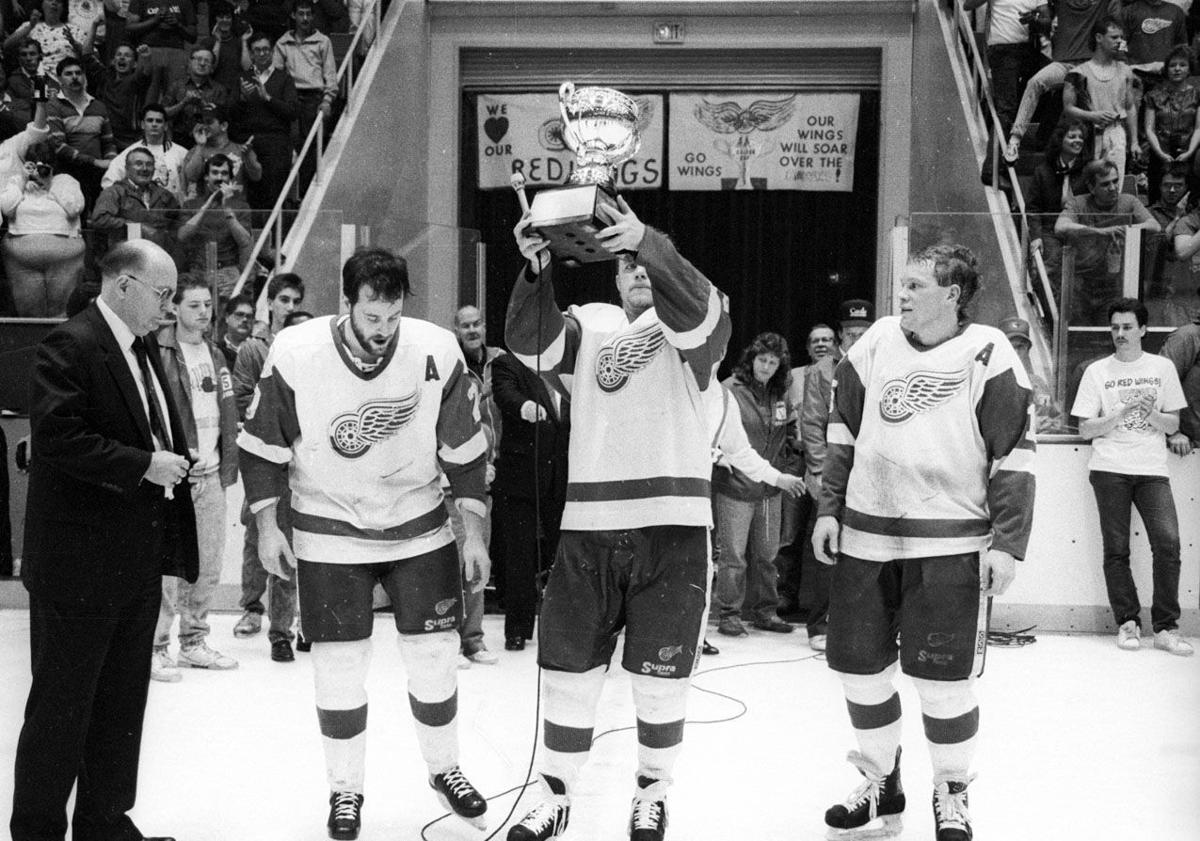 Captain Murray Eaves, center holds up the Calder Cup after the Adirondack Red Wings won it in 1989, with Lou Crawford at left and Glenn Merkosky at right. It was the first of many hockey games for Sports Editor Ken Tingley. 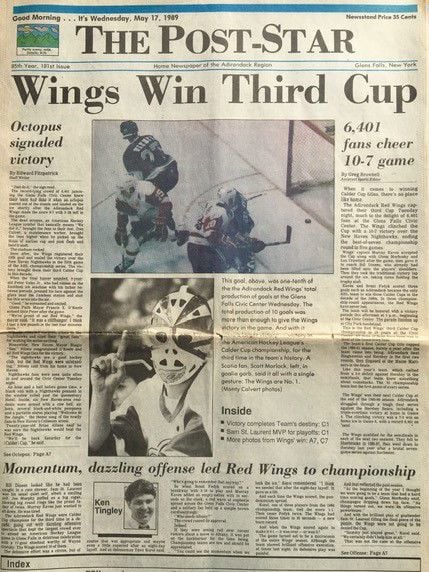 The front page of The Post-Star from May 17, 1989, celebrates the Adirondack Red Wings' Calder Cup championship. 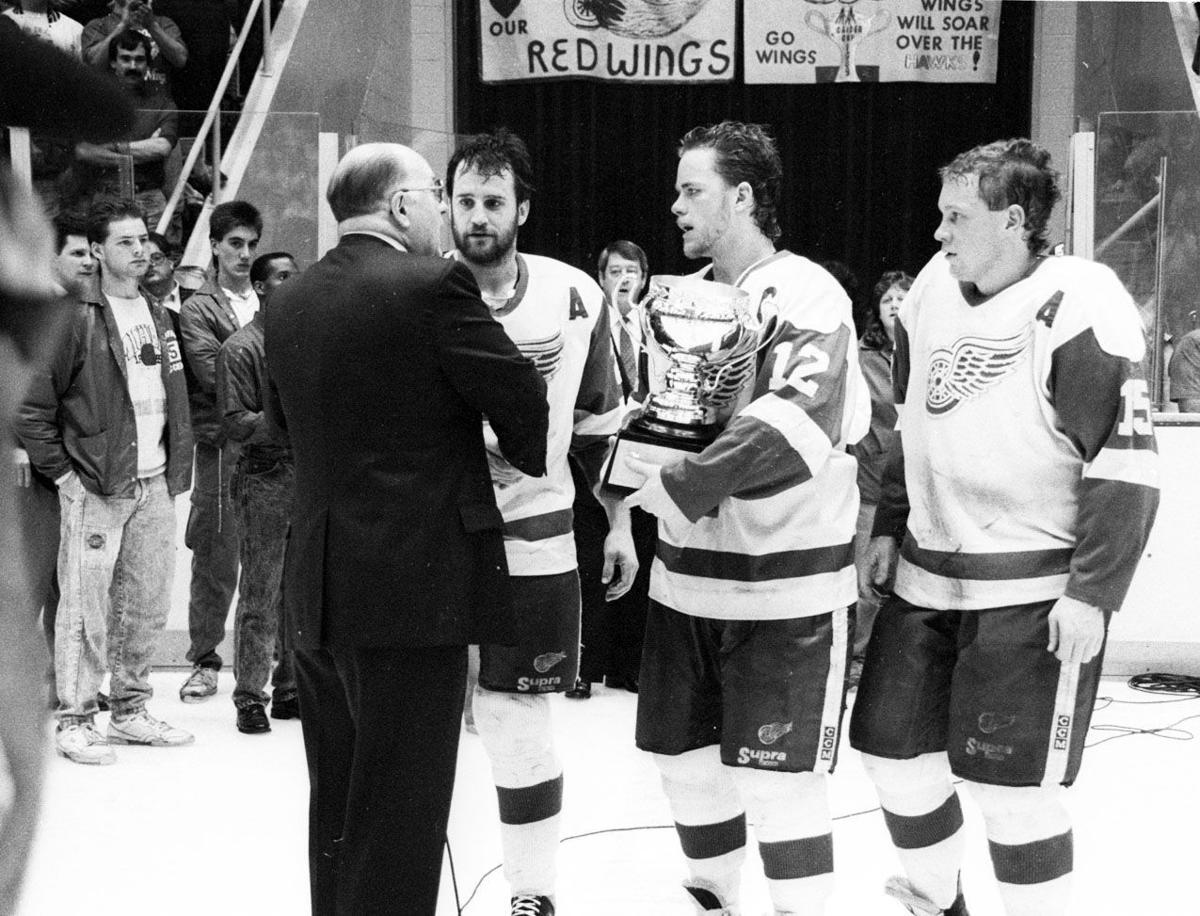 Captain Murray Eaves, center, takes the Calder Cup after the Adirondack Red Wings won it in 1989. Glenn Merkosky looks on at right, Lou Crawford is at left.

Post-Star Editor Ken Tingley will be retiring on July 17. He spent his first 11 years at the Post-Star as sports editor. He has selected a few of his favorite columns to run over the next two weeks.

Bill Dineen looked like had been caught in a rain shower. Sam. St. Laurent was his usual quiet self, albeit a smiling self. Joe Murphy puffed on a big cigar, blowing big round rings like the proud father of twins. Murray Eaves just wanted to sit down. He was tired.

The Adirondack Red Wings were Calder Cup champions for the third time in a decade, going out with a dazzling offensive spectacle that kept the largest crowd ever to attend an American Hockey League game in Glens Falls in delirious celebration with a 17-goal shootout worth of Wayne Gretzky. The Wings scored 10 of them.

The defensive effort was a circus, but of course that was appropriate and maybe even a little expected after an eight-day layoff. And as defenseman Dave Korol said, “Who’s going to remember that anyway?”

So when Brent Fedyk scored on a breakaway with 3:38 to play and Murray Eaves added an empty-netter with 30 seconds on the clock, a red wave of euphoria spread across the Glens Falls Civic Center and a solitary fan held up a simple brown cardboard sign:

The crowd roared its approval.

If they were seeing red over recent rumors about a move to Albany, it was put on the back burner for the time being. Championship teams are few and should be appreciated.

“You could see the momentum when we took the ice,” Korol remembered. “I think we need that after the eight-day layoff, it gave us a lift.”

And each time the Wings scored, the pandemonium spread.

Korol, one of three players for the 1986 championship team, tied the score 1-1. Then came Fedyk twice. The Wings had scored three times in 28 seconds — a new team record.

The game turned out to be a microcosm of the entire Wings’ season. Although the team showed brilliant offensive execution, at times last night, its defensive play was painful.

And that reflected the past season.

“At the beginning of the year, I though we were going to be a team that had a hard time scoring goals,” Glenn Merkosky said, champagne dripping down his face. “As things turned out, we were an offensive powerhouse.”

And with the brilliant play of goaltender Sam St. Laurent filling the final piece of the puzzle, the Wings were not going to be denied the Cup.

“Sammy just played great,” Korol said. “We certainly didn’t help him at all.”

That was not the case at the offensive end.

The New Haven Nighthawks closed to within one, 8-7, but the Wings were not going to be denied with Fedyk and Eaves providing the final two tallies.

At 10:49 p.m. Glens Falls time, the Calder Cup was in possession of captain Eaves.

And the Wings began the parade around the ice, handing the Cup from player to player, each taking part in the victory procession.

“It was a lot sweeter this time around,” Korol said. “Last time, I didn’t play that much that year and I didn’t really know what to do.”

“Nothing you can say can ever compare with it,” Merkosky said.

“They get a little bit better as you get older,” smiled coach Dineen after his champagne shower. The mild-mannered Dineen plans on celebrating his win by catching up on his paperwork.

“This one is a lot sweeter,” Eaves said.

As the Wings completed their victory lap, Eaves carried the Cup over to the corner of the rink and held it aloft, pointing to a group of people seated above.

“This was for the wives,” Eaves said.

“Bill (Dineen) said at the beginning of the playoffs that the wives had the players for 80 games, but for the playoffs, we’re his.

“The hockey wife is a very special individual,” Eaves said.

“I think I’m going to sit down now,” Eaves said.

Eaves and the rest of the Wings deserve the break.

I had been sports editor in Glens Falls for only eight months when I was plunged into one of the biggest sports events in the city’s history. The Adirondack Red Wings were in their prime and in the Calder Cup finals. It was Game 5 and the Red Wings were up 3 games to 1 and hoping to clinch.

The problem was that the one weak spot on my sports resume was hockey. I hadn’t covered the team all year when I decided to write a column on the biggest game of the year. I couldn’t even get a seat in the press box.

I hoped to set an example for the sports folks that we were going to expand the scope of our sports coverage — especially on big events — to include commentary and analysis and take the reader where they couldn't go. This was certainly not one of my better columns, but it added to the history of the moment and it was played on the front page.

With no seat in the press box, I remember finding a chair outside Heritage Hall where I started scrawling in long hand the outline of the column. It was the first of many hockey columns in the years to come.

New York-bred Tiz the Law is the favorite on both the morning line and in fans' hearts.

NYSPHSAA clarifies that remote learners are eligible for interscholastic sports

Yankees star Aaron Judge is hurt again, and his status is uncertain for the start of a four-game series with the Boston Red Sox.

Serengeti Empress cut back to sprinting distance and came away with a victory in the Ballerina, one of several races on Saturday's undercard.

Jolting Joe was the featured race winner on Thursday as Saratoga gets ready for its biggest weekend of the meet.

Captain Murray Eaves, center holds up the Calder Cup after the Adirondack Red Wings won it in 1989, with Lou Crawford at left and Glenn Merkosky at right. It was the first of many hockey games for Sports Editor Ken Tingley.

The front page of The Post-Star from May 17, 1989, celebrates the Adirondack Red Wings' Calder Cup championship.

Captain Murray Eaves, center, takes the Calder Cup after the Adirondack Red Wings won it in 1989. Glenn Merkosky looks on at right, Lou Crawford is at left.