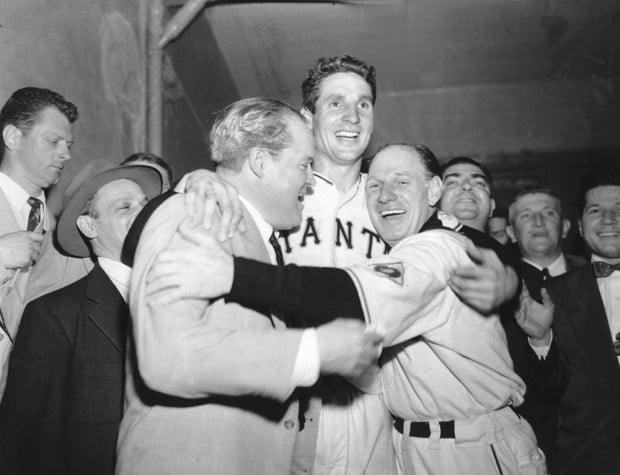 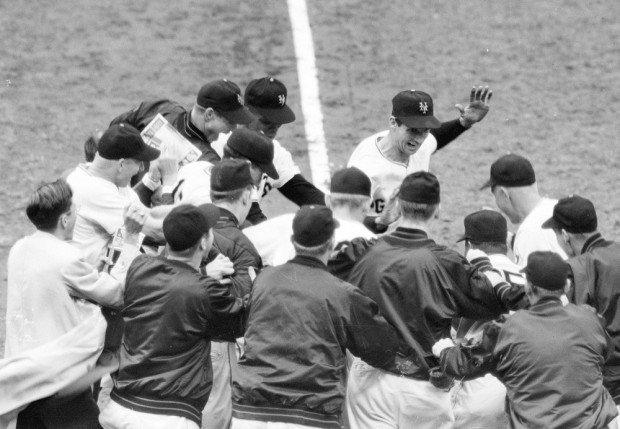 LOS ANGELES -- Bobby Thomson, who hit the legendary home run dubbed "The Shot Heard 'Round the World" for the New York Giants and inspired perhaps the most famous broadcasting moment in baseball history, has died. He was 86.

Thomson, who had been in poor health for several years, died Monday night at his home in Savannah, Ga., according to various media reports.

"Bobby Thomson will always hold a special place in our game for hitting one of the signature home runs in baseball history," baseball Commissioner Bud Selig said in a statement.

The Dodgers and Giants moved to California after the 1957 season, but Thomson's feat never was forgotten in New York.

"A guy came up to me on the street just last week and said, 'I still hate you!' " Thomson told the Los Angeles Times in 1981. "But he laughed when he said it. I still get a kick out of it ... all those years, and people still remember it so well."

Thomson's moment froze a city in time, way back when New York was the undisputed capital city of baseball. At least one of the city's three teams - the Giants, Dodgers or New York Yankees - played in every World Series from 1947-57.

In 1951, as the Yankees had clinched the American League pennant, the Giants and Dodgers staged a stunning sprint to the finish in the National League. The Giants trailed by 13½ games on Aug. 11, but they won 37 of their final 44 games to force a three-game playoff with their crosstown rivals.

Dodger pitcher Don Newcombe held the Giants to four hits over eight innings. When he gave up three hits to the first four batters in the ninth, manager Charlie Dressen replaced him with Ralph Branca.

Newcombe recalled Tuesday that Branca patted him on the back and said, "Don't worry about it, big fella. I'll take care of everything."

With a city on its collective feet - with a teenage Woody Allen reportedly listening to a radio at a downtown newsstand and Frank Sinatra following the game in a midtown hotel bar - Thomson hit Branca's second pitch for the home run that capped the "Miracle on Coogan's Bluff," a reference to the setting of the Giants' home field, the Polo Grounds.

"'I didn't run around the bases, I rode around 'em on a cloud," Thomson said after the game. "I felt as if I was actually living one of those middle-of-the-night dramas. You know, everything was hazy. I heard yells. I saw papers flying. I noticed people jumping through the air, but through it all, I just kept riding high on that cloud."

By then, Newcombe had retreated to the Dodgers' clubhouse beyond center field, which was filled with reporters and photographers anticipating a Dodgers victory, and started taking a shower.

"All of a sudden there was a stampede across from our clubhouse over the walkway to the Giants' clubhouse," Newcombe, now a special assistant to Los Angeles Dodgers owner Frank McCourt, said Tuesday. "I said to the clubhouse man, 'What happened?' And he said, 'Just what you think happened.' "

Robert Brown Thomson was born on Oct. 25, 1923, in Glasgow, Scotland. His father had left for the United States five days earlier, a carpenter in search of a better living for his family. In 1926, his father - by then a Dodgers fan - sent for the family. Thomson, his five siblings and mother landed by boat at Ellis Island and settled in the New York borough of Staten Island.

Thomson lived in the New York area for many years after his career, working as a salesman for a paper company. He forged a friendship with Branca, and they often made joint appearances for charity.

"Bobby was the hero," said Dodgers broadcaster Vin Scully, who also was at the Polo Grounds that day. "But the fellow who came out of that incident 10 feet tall was Ralph Branca. Ralph to me really carried the cross exceptionally well. After a while it had to be excruciating."

The relationship became strained years later after newspaper accounts revealed the Giants had stolen signs during the 1951 season, although Thomson insisted he had no idea what pitch Branca was about to throw before the home run. Branca said he had known all along the Giants stole signs but chose not to make a fuss.

"I didn't want to diminish a legendary moment in baseball," Branca told The New York Times in 2001. "And even if Bobby knew what was coming, he had to hit it. At home run hitting contests, they know what's coming and they still pop it up. Knowing the pitch doesn't always help."

Thomson was a three-time All-Star and hit a career-high 32 home runs in 1951. The Giants traded him to the Milwaukee Braves in 1954, and he also played for the Chicago Cubs, Boston Red Sox and Baltimore Orioles before his career ended in 1960.

In 1991, he told the San Francisco Chronicle that he did not mind his career being remembered for one moment, one spotlight that he shared with Branca.

"'These things have a way of taking care of themselves," Thomson said. "Let's face it, without that moment, we'd both be long forgotten."

His survivors include two daughters, Megan and Nancy, The Associated Press said.

The Schuylerville Black Horses return Friday to the exact spot they were in 2019: at the Carrier Dome, ready to face Chenango Forks for a state football championship.

Zion Freeman and Trey Bailey were among seven Queensbury football players named to the Class A Grasso division first team.

RECROPPED VERSION - FILE - This Oct. 3, 1951, file photo shows member of the New York Giants baseball team greeting teammate Bobby Thomson, center rear with hand raised, after Thomson's ninth-inning homerun against the Brooklyn Dodgers, to give his team a 5-4 victory and a trip to the World Series, at the Polo Grounds in New York. Famed home run hitter Bobby Thomson died Monday night, Aug. 16, 2010. He was 86. (AP Photo/File)
© Copyright 2021 The Post-Star, Lawrence & Cooper Streets Glens Falls,NY | Terms of Use | Privacy Policy | Do Not Sell My Info
Powered by BLOX Content Management System from TownNews.com.
You don't have any notifications.