Tom Taplin delivers a pitch for the Glens Falls Dragons last year at East Field. Taplin is one of seven returning players for the Dragons this season. 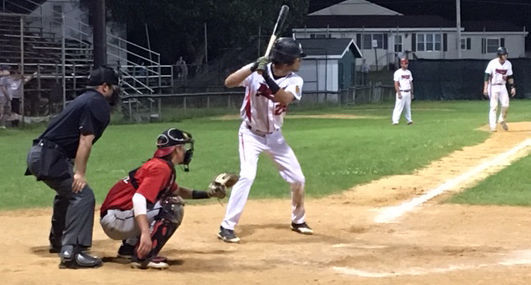 GLENS FALLS – Everything fell into place for the Glens Falls Dragons on Sunday night, but they were at home, where good things tend to happen.

The Dragons made good use of 10 hits and four Amsterdam errors to post a 12-4 victory at East Field. Glens Falls put away the game with a five-run seventh inning and got good pitching from Alex Phillips and Tom Taplin.

Thus continued the give-and-take of the Dragons’ rather strange existence so far. They are 5-1 at East Field but 0-7 on the road.

“Two different teams have showed up,” head coach Cameron Curler said. “We’ve got our East Field team and our road team. Every time we’ve come off a loss, we’ve answered at home. Now it’s time to see if we can find the same answer on the road.”

The Dragons play Monday and Tuesday away from home, then play five of the next seven games at East Field.

The Dragons overcame a 2-0 deficit with three runs in the third, helped by a couple of errors. They added three more in the fourth, an inning highlighted by Dan Lowndes’ two-run single. Anthony Vaglica finished the game 2 for 5 with two runs scored and Phoenix Hernandez went 2 for 5.

If the Dragons can play like that on the road, they’ll be a contender.

“I know we’re capable,” Curler said. “I feel really good about the things we can do; it’s just a matter of putting it all together. Once we get rolling, I’m excited about what we can do.”

Sunday: The Dragon scored three runs in the third and three more in the fourth for a blowout win over Amsterdam, 12-4.

Up next: Glens Falls visits Amsterdam on Monday and Albany on Tuesday.

Hudson Falls wins to stay in contention in Class B North

Hudson Falls rolled to a 62-14 victory over Scotia on Saturday to stay in contention for a playoff spot in Class B North.

Schuylerville and Queensbury tied 1-1 on Friday, giving Schuylerville the Foothills boys soccer title in the final game of the regular season.

Cambridge-Salem pulls away from Granville

Cambridge-Salem pulled away to a 34-18 Class D North football victory at Granville on Saturday.

Bruno is Adirondack League's Golfer of the Year

Lake George's Zach Bruno was named Golfer of the Year as part of the Adirondack League All-Star team released on Sunday.

Queensbury fell to 1-5 on the season with a 30-7 non-league football loss to Maine-Endwell on Saturday.

Tom Taplin delivers a pitch for the Glens Falls Dragons last year at East Field. Taplin is one of seven returning players for the Dragons this season.