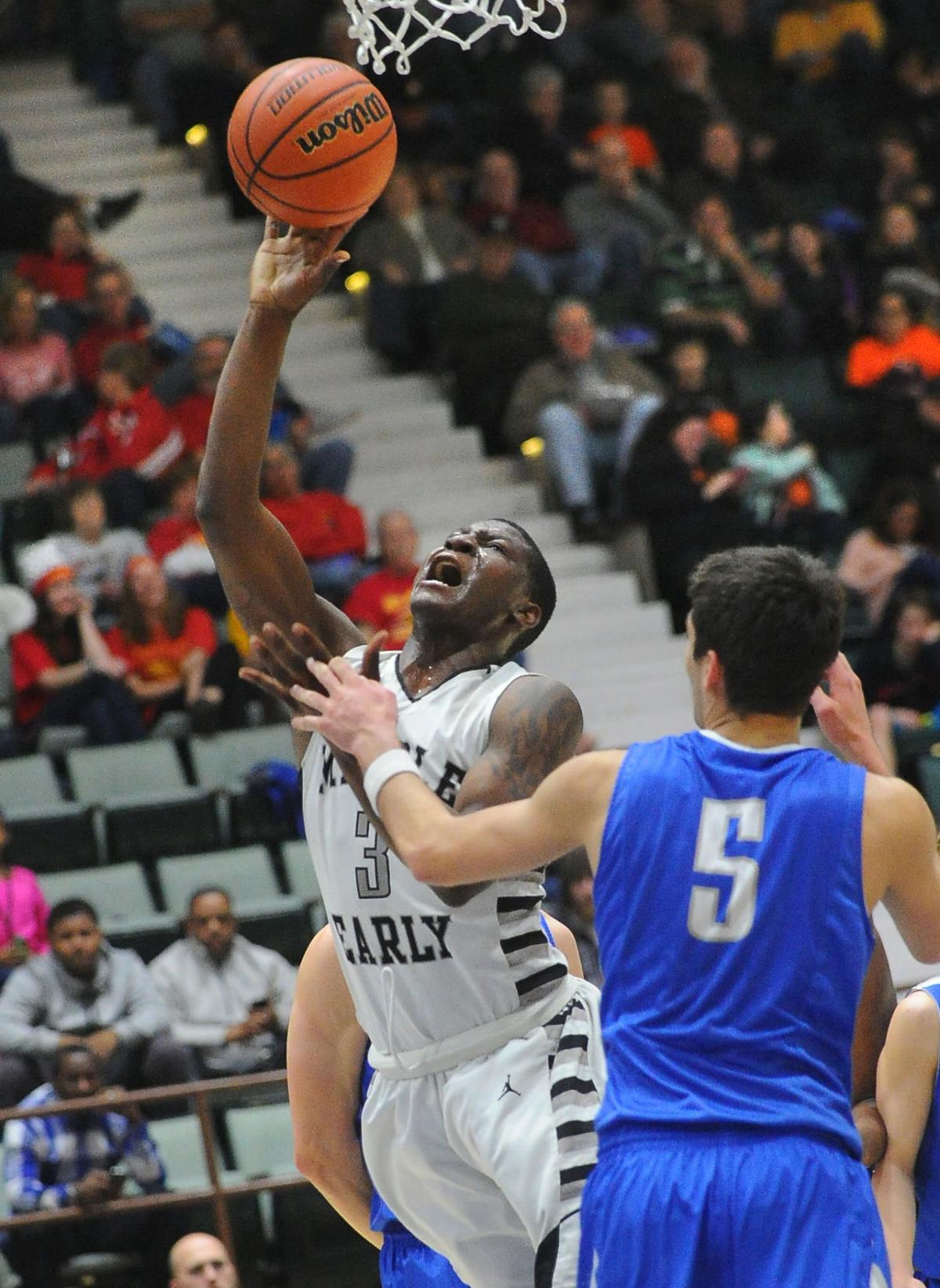 Middle Early College’s Gary Foster drives to the basket on Saturday in the Class C final of the State Boys Basketball Tournament at the Glens Falls Civic Center. 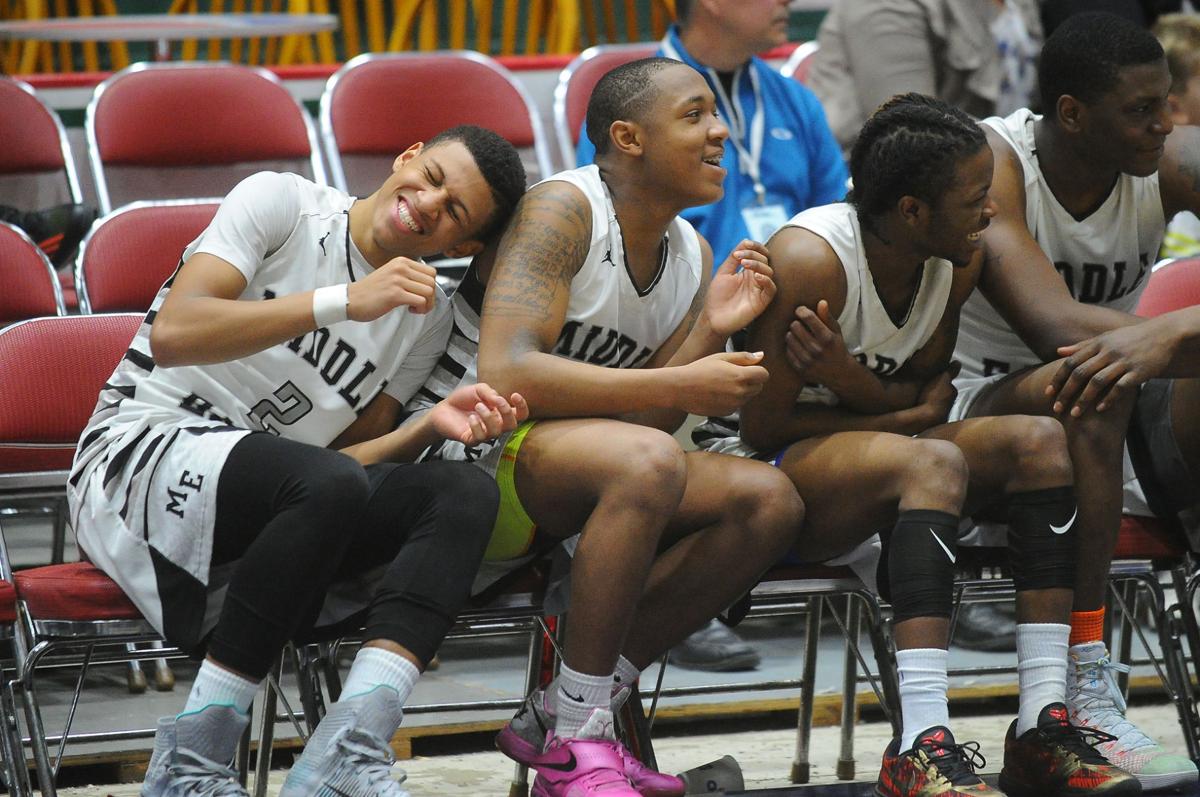 Middle Early College players celebrate their win on Saturday in the Class C final of the State Boys Basketball Tournament at the Glens Falls Civic Center.

“I told him he had to put up or shut up,” the Middle Early College coach said of Gary F. Foster after Saturday’s 82-40 Class C title win over Haldane. “He shut me up.”

Foster had a sub-par performance in the regional final. The 6-foot-6 forward averages 19 points but only scored 13 against Early College International.

He turned around and scored his 1,000th career point in a 22-point performance in the semifinal win over AuSable Valley and then put up 23 over Haldane on his way to being named Class C MVP. Foster likes the tough love of put up or shut up.

“I look at coach as my father figure,” said Foster. “He yells at me a lot and I just use it on the court.”

Foster has not had an easy life – “a rocky road,” he called it – and the gym has been an escape for him.

“He’s lived a very hard life and he’s gone through a lot to get here,” Rich said. “He makes it look easy. I’m proud of him.”

None of that was evident on Saturday, however. Foster, who was the last starter pulled because Rich felt “he earned that applause,” was so excited after the game he had someone take a photo of him talking to a reporter.

“It feels great,” he said, clutching the MVP plaque. “It feels amazing. I don’t have a lot of words for how it feels. I’m just happy to be here with my brothers.”

Foster took some abuse under the basket and Rich credited him with responding well. The coach pulled Foster briefly to give him a breather and then told him just to be patient.

The forward joked after the semifinal, to the laughter of his teammates, that he can score a lot of different ways. He demonstrated a few of those on Saturday. The only thing he didn’t do was hit a 3. Foster pulled out a couple of dunks, he showed off a pull-up jumper, was 5 of 7 from the line. Underneath the net, Foster had a size and strength advantage that led to scoring and rebounds — 17 in all.

If Foster’s sweet spot is down low, Jojo Staton’s was up top. The senior guard sank five 3-pointers, though he did try 12. Three of those 3s came in the first quarter. He’s come a long way since a being a freshman swimming in his varsity jersey — Staton joked it came almost to his feet.

“Growing up behind some of the great players at my school and for a coach like Rich really gets you ready for an environment like this,” he said.

Staton was part of the 2014 team that came to the Civic Center and lost to Hoosic Valley in the title game. Rich said that team wasn’t nearly as good as this team, which is more like the 2010 team that won it all.

“We just have a really talented team this year,” Rich said. “The two state finals teams that lost were not nearly this good. I mean, our sixth man is going to college to play ball — not just going to college but they want him. We’re stacked. It’s easy as a coach when you have depth. I didn’t do anything. They did.”

Staton might have summed it up best: “Probably the greatest feeling I’ve ever had in my life.”

Why are the Cowboys favored to win the divison?

Who's more likely to make the CFB Playoffs: Clemson or Ohio State?

Who's more likely to make the CFB Playoffs: Clemson or Ohio State?

Middle Early College’s Gary Foster drives to the basket on Saturday in the Class C final of the State Boys Basketball Tournament at the Glens Falls Civic Center.

Middle Early College players celebrate their win on Saturday in the Class C final of the State Boys Basketball Tournament at the Glens Falls Civic Center.