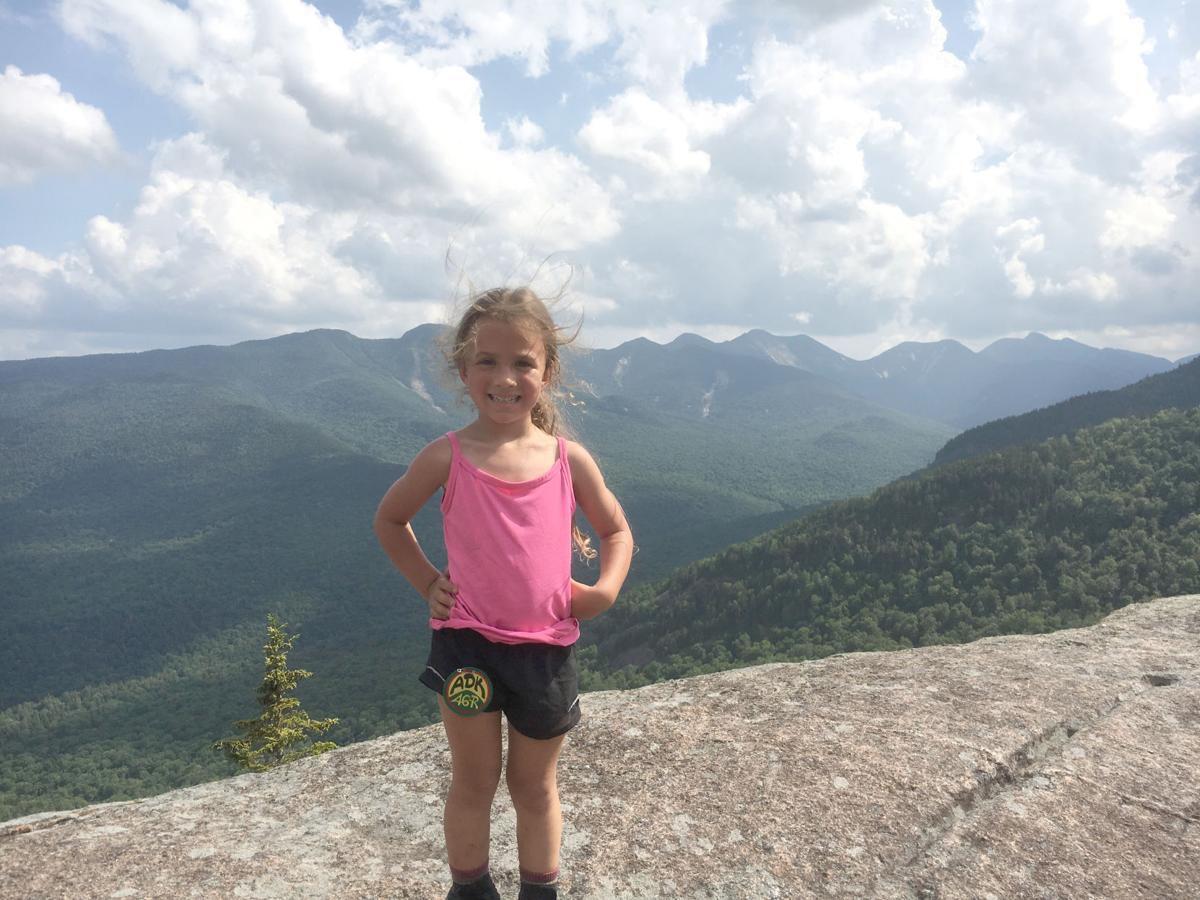 Maebh Nesbitt of Queensbury stands on top of Big Slide Mountain on July 20. The climb made her an Adirondack 46er and the youngest to ever ascend all of the peaks at 4 years, 11 months and 28 days. 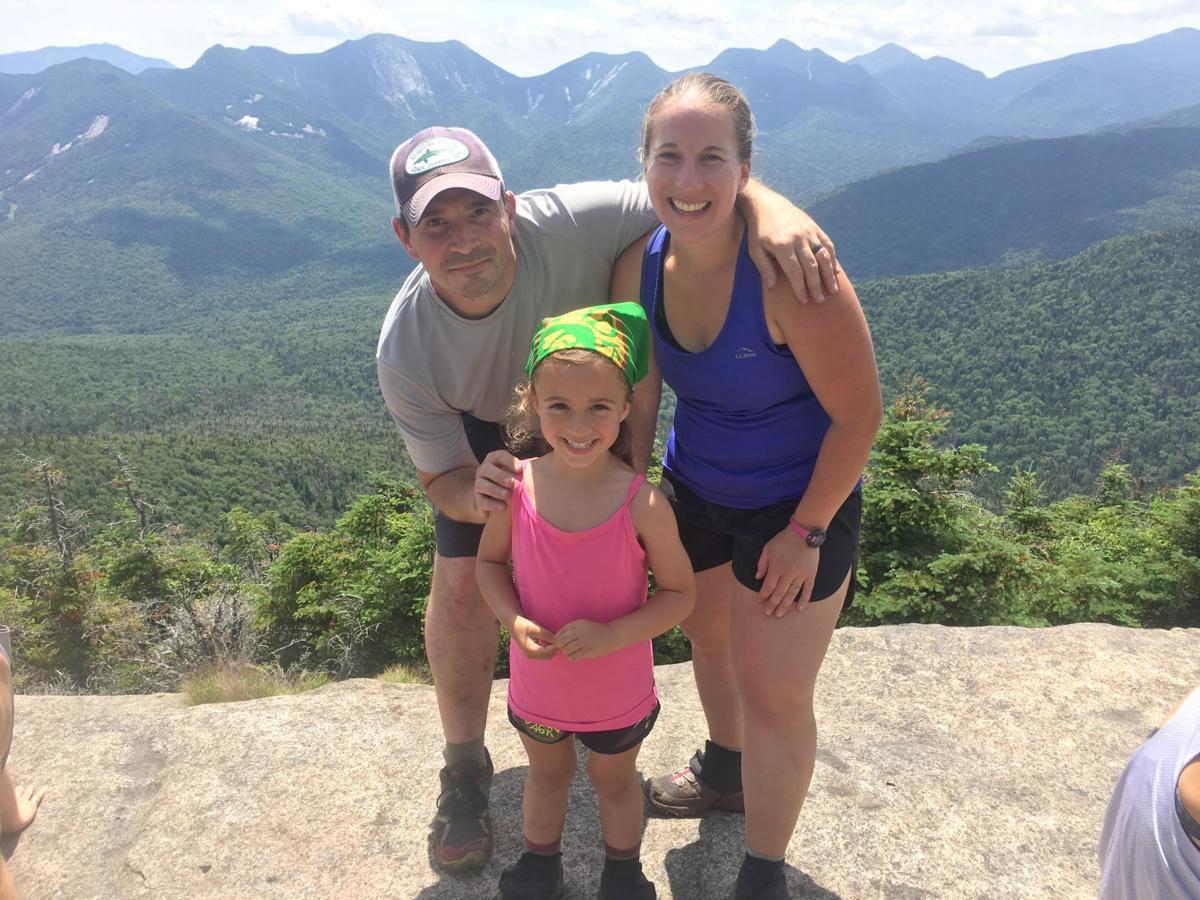 The Nesbitt family, Lee, Siobhan and Maebh, are seen atop Big Slide Mountain on July 20 after Maebh became the youngest recorded Adirondack 46er.

QUEENSBURY — For Maebh Nesbitt, a day of hiking isn’t just a good day.

When the 5-year-old reaches the top of a peak, she shouts to the world that it’s been the “best day ever.”

“And then a week later she’s on another peak and it’s the ‘best day ever,’” her mother, Siobhán Carney-Nesbitt said.

But, on Saturday, July 20, Maebh could have declared her hike up Big Slide as “most historic day ever.”

At 4 years, 11 months and 28 days old, the preschooler became the youngest-ever recorded 46er: a hiker who has climbed the 46 highest peaks in New York state.

“And she walked every step of the way,” Siobhán said.

For Siobhán and her husband, Lee Nesbitt III, making history wasn’t the goal in taking Maebh into the High Peaks.

“It wasn’t our intent necessarily to go out and break any records,” Siobhán said.

The pair just wanted to show their daughter the wilderness they knew and loved.

That love has sent them up peaks near and far, completing challenges from the Winter 46er to the Northeast Winter 111.

“When we finished that, we said ‘let’s have a kid,’” Siobhán said.

Besting that challenge with the birth of Maebh, the new parents wasted little time introducing their daughter to the heights of New York.

By the time she was 2, Maebh had become an unofficial 46er, having been carried up every peak.

But it didn’t take long from there for the toddler to find her mountain legs.

“Last summer, we said ‘Hey, do you want to be a 46er — actually be one, instead of someone who was carried and she said yes and so we started,” Siobhán said.

At about 2,654 feet, the distance to the Hadley fire tower is the same as a good portion of the way up Cascade and Porter Mountains, two of the High Peaks.

So with those hikes under her belt, her parents felt confident enough to say: “You’re ready, let’s do the real deal.”

Cascade and Porter were, indeed, Maebh’s inaugural High Peaks, traditionally known as the shortest treks of the 46.

But, from there, the journey was on.

The family completed 17 peaks in the summer of 2018, took a break for the winter, and hit the trails again this summer.

“And then it got real and we said ‘maybe you can be a 46er before you turn five,’” Siobhán said.

And she did, coming in just under the wire two days before her fifth birthday.

Joining her on that victory climb were her grandparents Matthew and Linda Carney of Natural Bridge.

“She wants to be just like Mommy and Daddy and Papi,” Siobhán said, referring to Matthew, who is also a 46er.

Those two days kept Maebh from entering the ranks of the five-year-old 46ers, of which there are five, according to research by the Nesbitts.

Siobhán is the president of the Adirondack 46ers Club, the management and record-keeping organization for the hikers.

Siobhán and Lee are also co-chairs for the group’s office for historians.

But they compared records of start and finish times through their office, talked with other High Peaks officials and even consulted Peaks, the 46er magazine.

“It kinda snowballed from there, but we definitely went and checked everything,” she said.

But the Nesbitts emphasized that their experience both with hiking in general and the High Peaks specifically helped them guide their daughter safely to her goal.

“I have two hikes left to finish my 8th round of the 46,” Siobhán said.

But that experience also let them pass along some mountain wisdom to Maebh, as when she tackled the treacherous cliffs on Saddleback Mountain.

“I remember on my first time, I was pretty terrified too,” Siobhán said.

Helping hold Maebh up, the family pushed through.

“At the top she was like, ‘Phew, I’m never doing that again,’” Siobhán said

Her parents couldn’t help but say: “Never say never on the High Peaks, sweetie, cause we’ve all said ‘I’m never doing that again’ and yet I always do it again.”

Looking to the future, the family is looking forward to tackling the Northeast 111 challenge of Northeastern U.S. peaks.

“As she gets older, there’s so many places we want to explore with her,” Siobhán said.

But looking even farther ahead, the Nesbitts have worked to instill a strong sense of conservation and appreciation of keeping the peaks clean, bringing her along on Trail Steward clean-up events.

“I tell her, ‘I want these mountains to be pretty and here for you when you have kids.’ ”

Reaching the summit, finding a crowd

After a summer of seeing cars lined up along the narrow shoulders of Route 73 outside Keene Valley, R.L. Stolz, a longtime Adirondack climbing…

Maebh Nesbitt of Queensbury stands on top of Big Slide Mountain on July 20. The climb made her an Adirondack 46er and the youngest to ever ascend all of the peaks at 4 years, 11 months and 28 days.

The Nesbitt family, Lee, Siobhan and Maebh, are seen atop Big Slide Mountain on July 20 after Maebh became the youngest recorded Adirondack 46er.