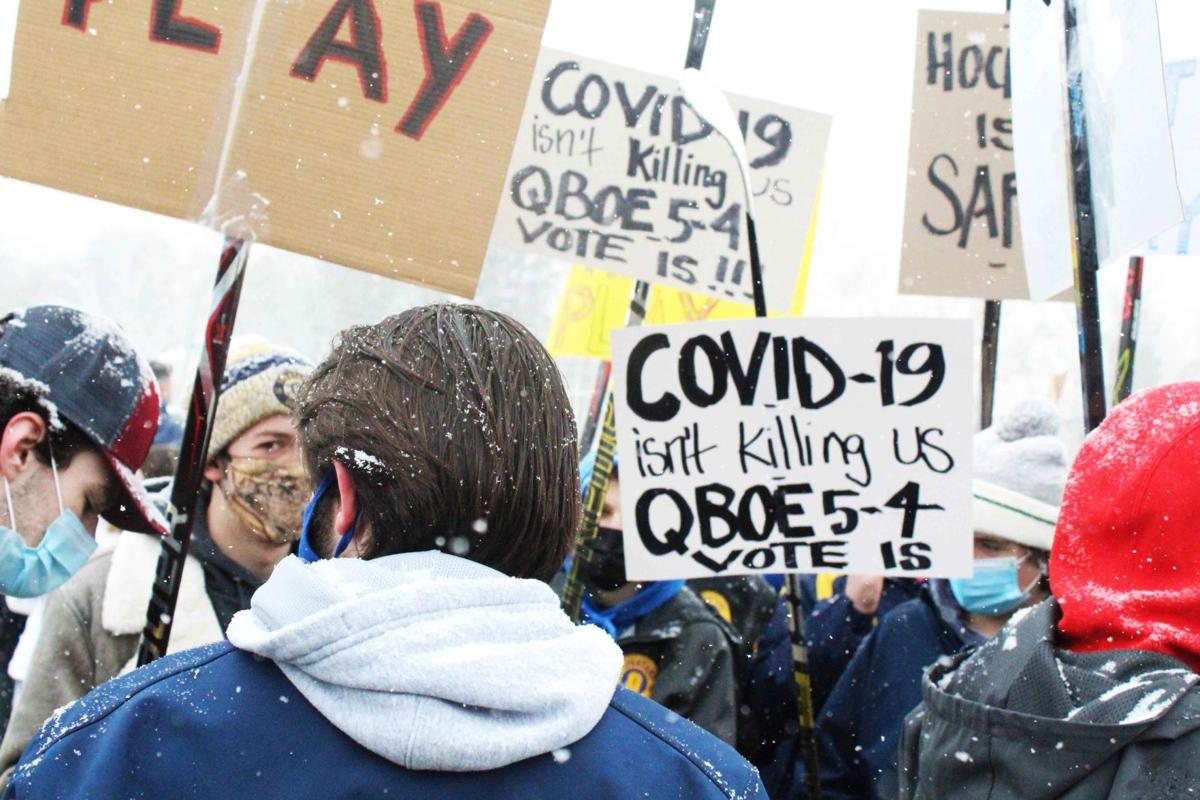 Queensbury students walked out of class on Tuesday after the school board's decision on Monday not to proceed with higher-risk winter sports.

An online petition to create 'Dacks Dog Park somewhere in Glens Falls has gained more than 150 signatures since being launched earlier this week by local business owner Jim Murphy.

Bravos to Queensbury students for expressing their displeasure with a school board decision through a peaceful walkout and protest on Tuesday. About 50 students and parents staged the protest of the board’s decision to not proceed with higher-risk winter sports — wrestling, hockey and basketball. Whatever you think of the board’s decision, it is understandable that some students are upset, and it is admirable that they chose to make that known in a legal, constitutional and effective manner. This was a hard call for the school board, reflected in its 5-4 vote. Cases have been falling, but people are still dying. Vaccinations have begun, but variants are spreading. Although some sports can be played safely, these high-contact indoor sports are the most problematic. Masks can do only so much when athletes are breathing hard and yelling to each other and when, especially in wrestling, the chances of the mask getting inadvertently pulled off are very high. Sports are a great activity for young people and important to the lives of a significant percentage of local students. But they are optional, and safety must come first. If it’s a close call, school boards should come down on the side of caution. Some of those who want athletics to resume argue the lack of them is bad for the mental health of student-athletes. We have no doubt this is true, but the pandemic has had many negative effects — isolating students from their friends, forcing them to stay home with little to do — and it’s not possible to draw a straight line, as some are doing, from the canceling of school sports to a national rise among young people in thoughts of suicide. Many of us have lost jobs because of the pandemic; some have lost businesses. But jobs, businesses and athletics can be reclaimed, restarted and resumed when conditions are safer, while the 468,000 American lives already lost are gone forever. It’s difficult, but we all have to take the long view to get through this pandemic as safely as possible.

Use of antibodies is successful

Bravos to Fort Hudson nursing home and Dr. Philip Gara for the successful use of monoclonal antibodies to treat residents infected in an outbreak at the home. Although residents had recently been vaccinated, the vaccine’s protective effects take at least a week to kick in. Residents started testing positive, and the infection spread quickly. Administrators were worried. Back in the spring, the home lost 11 residents in a COVID-19 outbreak. This time, Gara decided to try the monoclonal antibodies, which work best when given close to the time of infection, and not one resident died. Gara had worked hard to obtain the antibody treatment, and the nursing home residents benefited.

Bravos to Darren and Lisa Tracy (not for the first time) for their superb restoration of a tiny historic house at 5 Culvert St. in Glens Falls, work just recognized with a state Historic Preservation Award. Their efforts transformed a decrepit eyesore into a stunning little gem of a house that not only shows off its age — it was built in 1870 — but with its small size (627 square feet) and uncommon style (French Second Empire) offers passersby a fun surprise in the midst of the city’s streetscape.

Bravos to Jim Murphy for promoting the establishment of a dog park in Glens Falls. Murphy has set up an online petition and a Facebook group, and he hopes local people will sign on to the effort. He is seeking suggestions for locations. The city has several parks with open land, including Murray Street, East Field, Haviland Cove and Crandall. Maybe the thing to do would be, rather than establish one large dog park, set up several smaller ones, which could help keep to a minimum some of the chronic dog park issues, such as cleanup and fights. We have heard that other communities have built separate fenced-in areas for dogs of different sizes, so great Danes aren’t squashing Dachshunds during rough play. If a dog park or parks were established, it would be a very good idea to set up a volunteer organization of dog owners that would police use of the park and make sure it was kept clean. But Murphy is absolutely right — a dog park is a missing element in the city’s impressive list of amenities.

It's a shame that some people find a purpose in disrupting others' attempts to improve the community. But they should be ignored while the grown-ups go about their work.

School board members are having to make tough decisions on sports, and the last thing community members should be doing is harassing them for the hard calls they make.

EDITORIAL: Crime rates have fallen dramatically, expensive prisons are closing, it's all good

It can be difficult for communities that have little else in the way of industry to have a state prison close. But closing prisons is a good thing overall for New York.

EDITORIAL: Elise Stefanik should have had the courage of her convictions on Greene

Marjorie Taylor Greene's vicious lies are "inexcusable" — Elise Stefanik is right about that. She should have done something about it.

EDITORIAL: The truth is, pandemic is hard but preventative steps have worked

Rachel Seeber is right to point out how devastating the pandemic has been, but our only choice is to keep working together to survive it.

Letitia James has done her duty as attorney general in releasing a report critical of the Cuomo administration's handling of COVID-19 in nursing homes.

Boos and bravos takes a look at recent news, singling out some for praise, others for criticism.

Around 50 national personalities signed on to a recent ad campaign, urging President Joe Biden to reconsider the design of his $1.9 trillion p…

Queensbury students walked out of class on Tuesday after the school board's decision on Monday not to proceed with higher-risk winter sports.

An online petition to create 'Dacks Dog Park somewhere in Glens Falls has gained more than 150 signatures since being launched earlier this week by local business owner Jim Murphy.