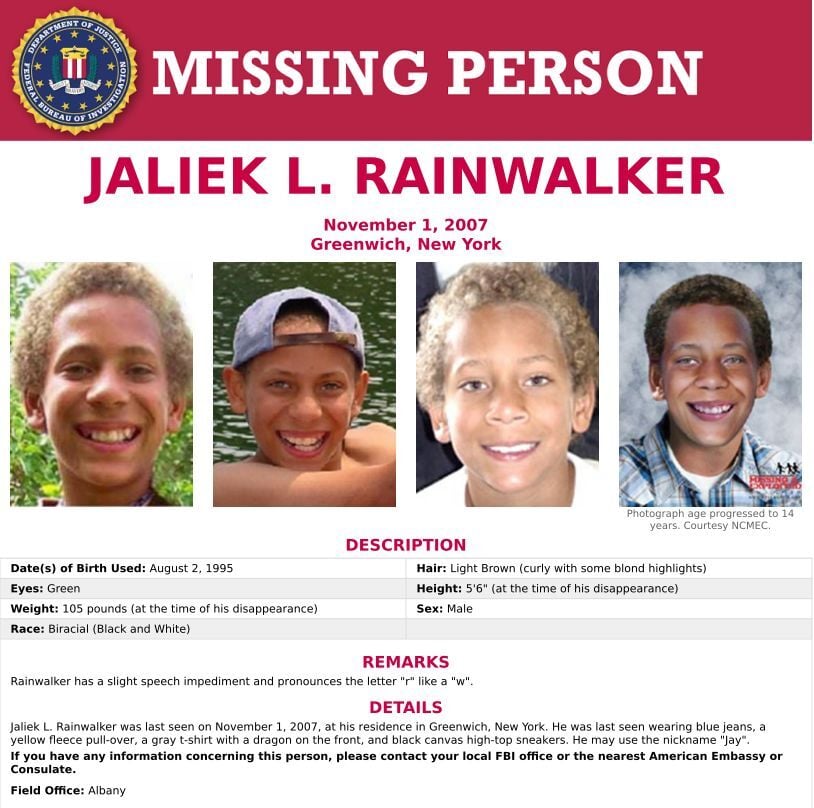 A missing person notice for Jaliek Rainwalker from 2007. 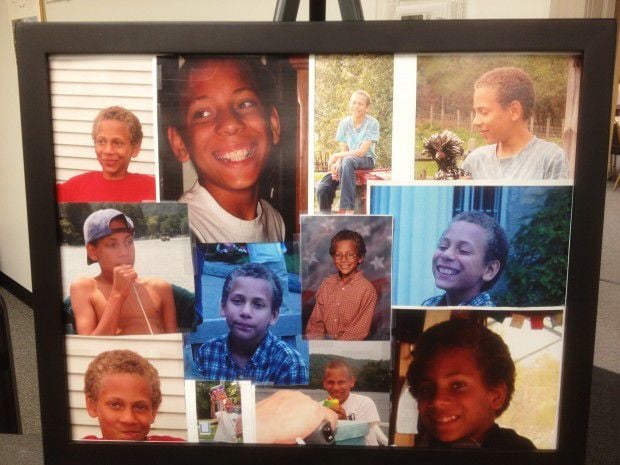 Photographs of Jaliek Rainwalker are displayed during a press conference in December 2012 in Greenwich announcing Rainwalker’s case had been reclassified as a homicide investigation.

This summer a small glossy advertising circular arrived in my mailbox in Rochester. I was about to toss it in the recycling bin when I noticed a familiar face on the back cover: Jaliek L. Rainwalker.

Jaliek disappeared 14 years ago this month, on Nov. 1, 2007, from a home in Greenwich, Washington County, where he lived with his adoptive parents Stephen Kerr and Jocelyn McDonald.

I grew up in Washington County, but was already living in Rochester at the time of Jaliek’s disappearance. I remember it well because my mother was a teacher at Jaliek’s former elementary school, Salem Washington Academy, near Greenwich.

Although she never had Jaliek in her classroom, the school is small and my mom, Dawn Miner, got to know him when his second-grade classroom was adjacent to hers.

“He was a very sweet, loving little boy,” said Miner when I asked her recently to describe Jaliek. “He was a little on the quiet side, but he had a beautiful smile and was just a very nice kid.”

This child with the beautiful smile was 12 years old at the time of his disappearance and is 26 now, though you wouldn’t know it from the photos on the advertising circular delivered to my home this summer.

One of those photos is Jaliek’s official age-progressed photo from the National Center for Missing and Exploited Children. It shows how Jaliek would look at age 14 — two years after his disappearance.

When I first noticed this lack of a current age-progression photo, it upset me for the obvious reason: if Jaliek is still alive, it would be challenging for someone that didn’t know him previously to identify him based on a decade-old photo.

Tragically, though, Jaliek is not believed to be alive. In 2012 authorities upgraded the case from a missing child to a probable child homicide. They also named Kerr a “person of interest” in the case in 2008.

So Jaliek’s case, which is still open, exists in one of limbo — a missing child who would now be a man — but was denied that natural progression of life by someone. Who is that someone? And, where is Jaliek?

The good news in this gut-wrenching case is that there are many people who continue to demand answers to these questions. I recently was welcomed into the “Justice for Jaliek Rainwalker” Facebook group, which is a vibrant community of over 3,000 people working hard to keep Jaliek’s case in the public eye and the nose of law enforcement.

The very active group was founded two years ago in part by Jessica VonGuinness, of Saratoga Springs, and is led by six like-minded administrators. None of them knew Jaliek personally, but they are all committed to keeping his memory alive and working toward justice in his case.

“Every day it overwhelms me with bittersweet optimism the number of people who have not forgotten Jaliek,” VonGuinness said. “It’s a shame we’re here in the first place, but the group has done a very good job keeping Jaliek first.”

They have partnered with the Cold Case Analysis Center at the College of Saint Rose, which provides training and experience to students in unsolved case investigation and analysis while forming relationships with community agencies and contributing resources to local law enforcement to address cases like Jaliek’s.

The center, which is led by Dr. Christina Lane, is seeking donations to aid in furthering the analysis of evidence in cold cases through modern forensic science innovations. Any money donated in Jaliek’s name that isn’t used for testing in his particular case will eventually go to a scholarship in his name.

“We have a great relationship with the center and communicate regularly with them,” VonGuinness said. “Our group is a conduit, and we welcome all tips and all people.”

Many members of Justice for Jaliek Rainwalker did not know him personally, but quite a few did. They include several members of his biological family, whom VonGuinness notes “love him dearly,” foster siblings from homes Jaliek lived in prior to being adopted, former teachers, old classmates and campmates, neighbors, his karate instructor and his theater instructor.

Among those who are not members of Justice for Jaliek: Kerr and McDonald, his adoptive parents.

To learn more about the Cold Case Analysis Center at the College of Saint Rose, visit https://coldcase.strose.edu/. To join the Justice for Jaliek Facebook group, visit https://www.facebook.com/groups/795042551292211.

Caurie Putnam of Brockport, a freelance writer and former columnist for the Rochester Democrat and Chronicle, grew up in Washington County. The writer’s mother is a teacher who knew Jaliek Rainwalker, and this is the first time her mother has said anything publicly about him.

A nice fishing stream interrupted by development is my idea of a really bad idea.

Williams: Locally, nationally and globally, inequity imperils us all

Michael Paul Williams — a columnist with the Richmond Times-Dispatch — won the 2021 Pulitzer Prize in Commentary "for penetrating and historically insightful columns that guided Richmond, a former capital of the Confederacy, through the painful and complicated process of dismantling the city's monuments to white supremacy."

Money, schools and religion: A controversial combo returns to the Supreme Court

The Ethical Life podcast: What does it mean to be a good COVID citizen?

The menagerie in the back 40 is waiting for your old pumpkin.

Episode 25: Richard Kyte and Scott Rada also discuss campaign yard signs and how or whether they contribute to our political discourse.

Biden brings a menorah lighting back to the White House, rededicating a Hanukkah tradition from the 20th century

Kyle Rittenhouse is 18 years old. On Aug. 25, 2020, when Rittenhouse killed two men during a night of civil unrest in Kenosha, Wisconsin, he was 17. But when he took the stand during his murder trial, he looked like he could be 13. Defendants in murder trials often do themselves no favors by testifying in their own defense, but Rittenhouse probably helped himself. He was soft-spoken and ...

A missing person notice for Jaliek Rainwalker from 2007.

Photographs of Jaliek Rainwalker are displayed during a press conference in December 2012 in Greenwich announcing Rainwalker’s case had been reclassified as a homicide investigation. 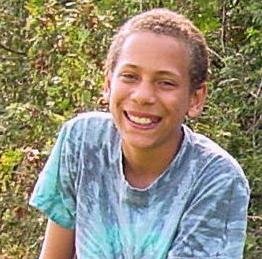 One of the many photos of Jaliek Rainwalker that authorities have handed out over the years.