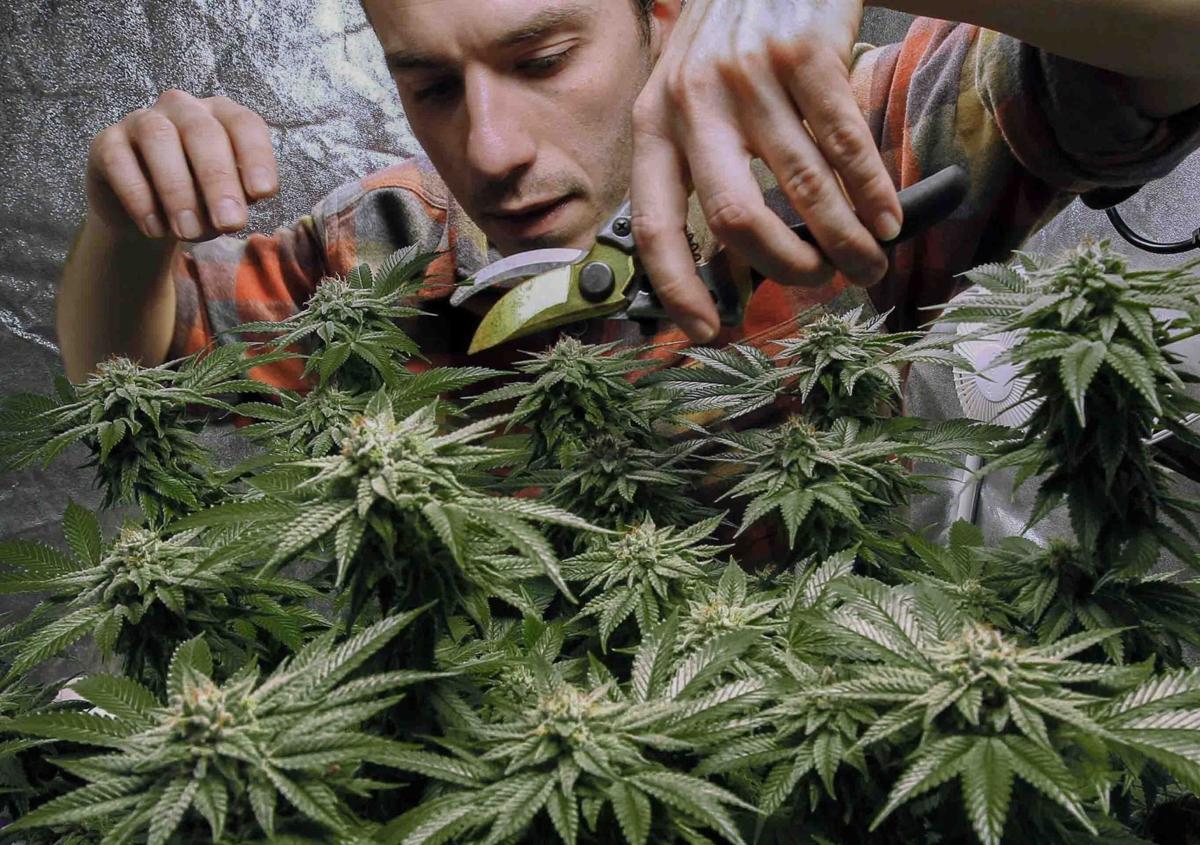 James MacWilliams prunes a marijuana plant that he is growing indoors in Portland, Maine in 2017. New York has failed in recent years to pass marijuana legalization, but a state senator said lawmakers have reached an agreement to legalize marijuana sales to adults over the age of 21. 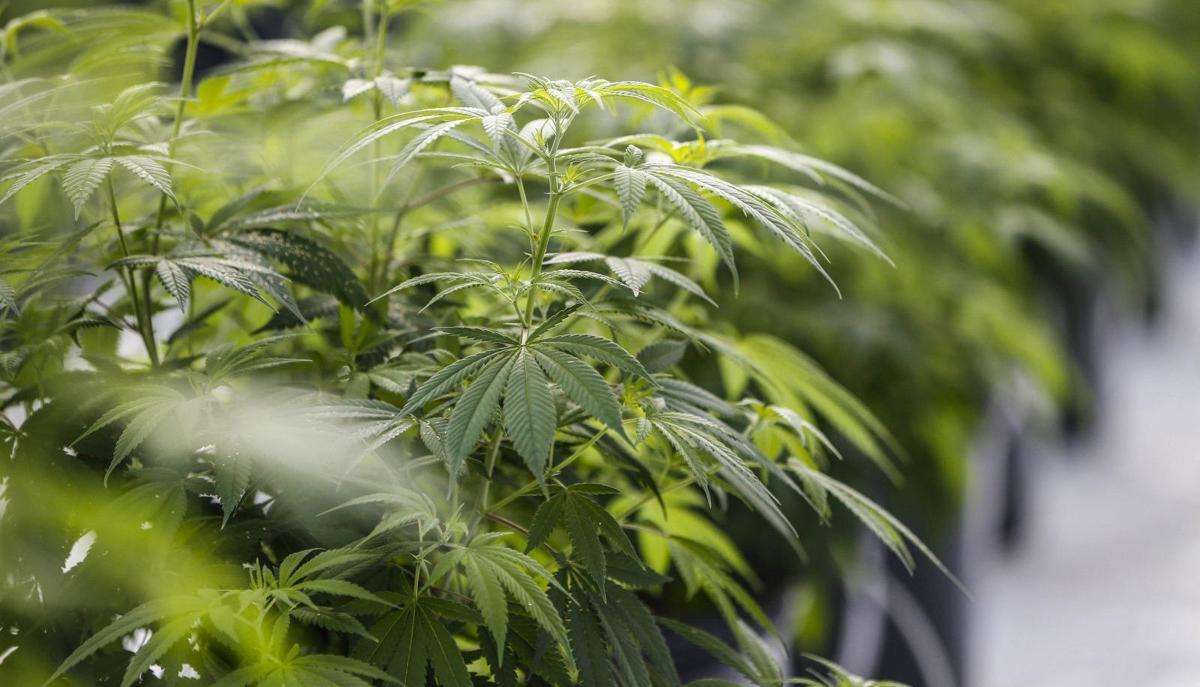 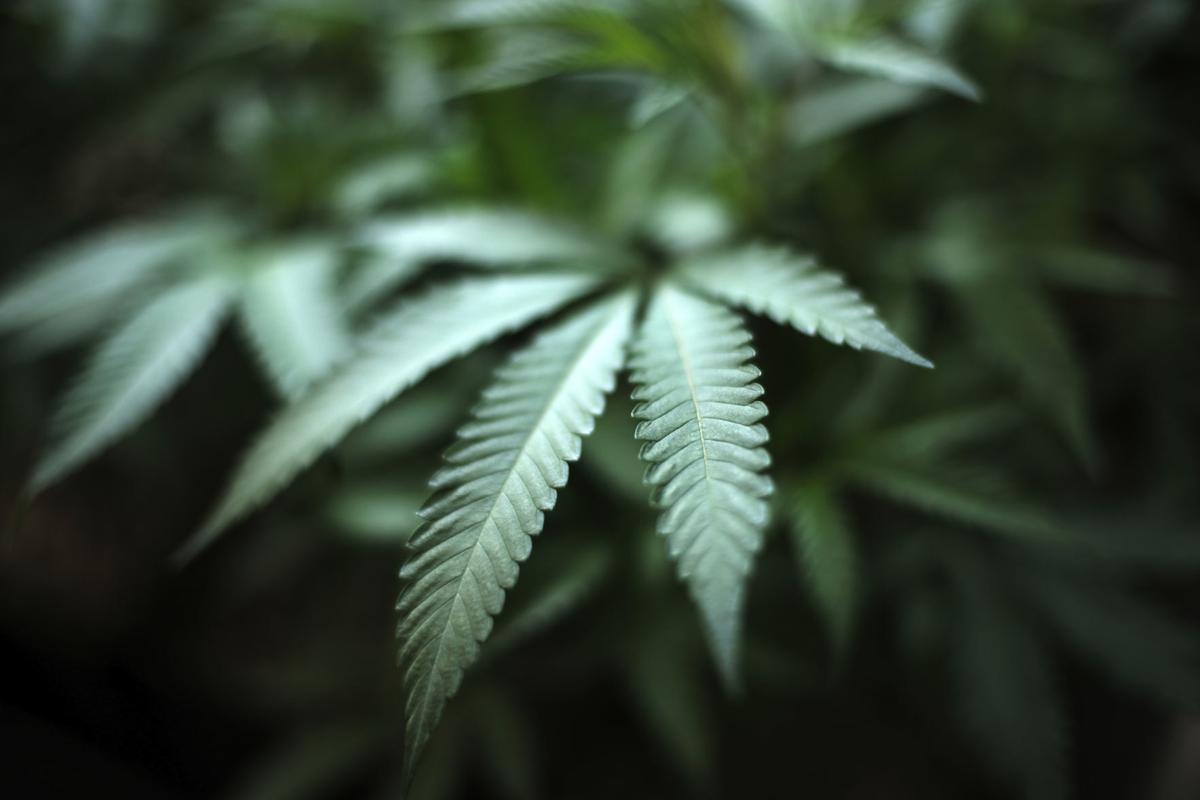 ALBANY — Marijuana will become legal to purchase and use across New York State through a cultivation and distribution system overseen by the state government, according to a tentative deal that came together Wednesday at the State Capitol.

Lawmakers in Albany had reached a tentative agreement to legalize recreational cannabis. Here's a look at what it would mean.

The looming agreement, according to multiple sources, provides for retail sales and clublike marijuana lounges, with a large share of the resulting annual proceeds going to low-income, mostly minority neighborhoods under a “community reinvestment” program intended to help areas that for decades have been subject to higher marijuana arrest and prison rates under the nation and state’s long war on drugs, according to information on the agreement’s provisions obtained by The Buffalo News.

The deal among the Senate, Assembly and Gov. Andrew M. Cuomo would pave the way for state-regulated marijuana sales to start at approved retail outlets in about two years. The sides hoped to announce a firm agreement later Wednesday, but last-minute snags are always possible in Albany.

Negotiators had been stuck for a couple of weeks on a number of issues, including how to enforce impaired driving laws if, for instance, an officer smells the drug inside a car during a traffic stop, and what the penalties should be for driving while high.

The emerging deal calls for the state Health Department to study the use of devices to permit officers to give saliva tests to people suspected of being high on marijuana, but most lawmakers say such technology has not yet shown to be reliable.

It also would allow police to use marijuana odor to help determine if a driver is impaired, but would ban odor from being a reason to search a vehicle. It calls for driving while impaired by marijuana use to be a driving while ability impaired violation, the lowest degree of DWI violation, resulting in a violation and not a misdemeanor. Negotiators into Wednesday afternoon were working on that one provision and cautioned that the final terms may have been changed.

Legislation spelling out exactly what lawmakers will be voting on in the days ahead was also not yet made public on Wednesday afternoon.

A proposal to permit people to grow marijuana plants at home for personal consumption was resolved, sources say, a week or two ago, with Cuomo bowing to lawmakers on the matter. The deal would permit each person to grow up to three mature and three immature marijuana plants, indoors or outdoors, or up to 12 total plants per household. Localities could not overrule the right of residents to grow marijuana at home, but they could regulate the activity.

Marijuana sales and use would be legal for adults 21 and older.

Cuomo and lawmakers envision a three-tiered system, based on the state alcohol laws, that creates, with some exceptions, separation between marijuana growers and processors from wholesalers and retailers.

The nearing agreement would also change the state’s medical marijuana program, which patients and physicians have complained for years is cumbersome, expensive and too long a process to obtain the drug for eligible New Yorkers with certain medical conditions.

Under the deal, more medical conditions would be covered; patients could smoke medical marijuana, which is now banned; and qualified patients would be allowed to get a 60-day supply of the drug compared with 30 days now.

The agreement also would create a goal that half the licenses awarded in the new marijuana distribution and sales system be given along “social equity” lines, which includes individuals or firms in low-income neighborhoods affected by high marijuana enforcement rates over the years, minority- and women-owned businesses, certain financially distressed farmers and disabled veterans.

Only four years ago, Cuomo was steadfast against relaxing marijuana use laws, calling it a “gateway” to more dangerous drugs. For years, he also blocked efforts to legalize medical marijuana, which is overseen by physicians and pharmacists, and patients must get approved by the state. Cuomo began showing signs of shifting to supporting legalizing recreational cannabis in 2018 when he was running in a Democratic primary for reelection.

After he won a third term, Cuomo embraced marijuana legalization.

But his first stab at a bill fell flat with pro-legalization lawmakers largely over the community reinvestment issue. For many lawmakers, driving tax revenue proceeds to low-income neighborhoods – with funds going for everything from new health care programs to job creation efforts – was their line in the sand.

This year, Cuomo said he was driving $100 million annually to a community investment fund, but lawmakers said the true number in the governor’s budget plan was far lower.

The looming deal calls for all marijuana and medical marijuana revenues to go into a special marijuana account to pay for direct marijuana-related state expenses, such as at the tax department or State Police. All remaining revenues, which will be the lion’s share of tax proceeds, will be divvied up: 40% to the community investment program, 40% for state aid to public schools and 20% for drug treatment and public education programs about marijuana.

Still a lot of work ahead

It is unclear when marijuana sales would become legal. There is much work ahead to turn the marijuana legislation into regulations that will decide everything from potency levels to where retail, distribution and cultivation facilities get located.

“Existing laws have been ineffective in reducing or curbing marijuana use and have instead resulted in devastating collateral consequences including mass incarceration and other complex, generational trauma that inhibit an otherwise law-abiding citizen’s ability to access housing, employment opportunities and other vital services,” states the 2021 marijuana legalization measure sponsored by Assembly Majority Leader Crystal Peoples-Stokes, a Buffalo Democrat, and State Sen. Liz Krueger, a Manhattan Democrat.

Their bill – the Marijuana Regulation and Taxation Act – is a template for what negotiators have been discussing behind closed doors in recent weeks, people close to the talks have said.

The two lawmakers say their plan will attack a long-standing illicit marijuana marketplace in New York that has no controls on minors being able to obtain the drug. Their bill, as does Cuomo’s January legislation, still permits employers to enforce marijuana workplace policies and does not permit driving impaired while high on marijuana. Unlike the device used to gauge alcohol in a person’s system, no current field exists in New York to determine precisely how high a person might be on marijuana.

The deal would create a New York State Cannabis Control Board that would regulate all aspects of marijuana, including cultivation and distribution and retail sales. It would be overseen by a five-member board, with the governor selecting three members and the heads of the Assembly and Senate getting one appointee each.

Marijuana legalization has been opposed by groups including physicians and other health concerns, and law enforcement including police officials and district attorneys. Proponents have included a number of minority rights organizations, drug policy groups and a growing number of lawmakers; they point to opinion polls showing a majority of New Yorkers favor marijuana legalization.

The momentum for passing the bill was also shaped by the supermajority status won by Senate Democrats in November. Marijuana legalization stalled when the chamber was controlled by Republicans, which ended in 2019.

A legal marijuana sales system is projected by the Cuomo administration to be worth $350 million in annual tax revenues. That won’t be fully realized, however, for years. Among the various levels of taxation: a 9% sales tax on retail sales, with all that money going to the state, and another 4% sales tax with revenues going to localities.

Cuomo said Wednesday that making the drug legal is a top priority for him and would make New York the “progressive capital” of the United States.

Making marijuana legal, and taxing it, he said, “is not just social equity, it’s also revenue for the state.”

Marijuana legalization hits a snag: Concerns about driving while impaired

The Assembly’s chief sponsor of a multiyear effort to legalize marijuana in New York says a deal with the Senate and the governor could be made soon.

ALBANY – With a new state budget due before the clock turned to April 1, some budget bills began making their public appearance on Tuesday, making it clear – at least for now – that an array of essential services for New Yorkers are destined for budget cutbacks or freezes as the state’s finances are clobbered under the weight

James MacWilliams prunes a marijuana plant that he is growing indoors in Portland, Maine in 2017. New York has failed in recent years to pass marijuana legalization, but a state senator said lawmakers have reached an agreement to legalize marijuana sales to adults over the age of 21.