ALBANY — New York’s loss of a congressional seat due to the 2020 census will again set off a once-a-decade game of musical chairs among those currently holding the state’s congressional seats, and continue what political observers think will be a shift of political power from upstate to downstate.

With the Census Bureau saying the state fell just 89 people short of keeping all 27 seats, Gov. Andrew Cuomo said the state is weighing its legal options to challenge the outcome.

“Obviously, it’s not desirable. The last thing you want to do is lose representation in Washington,” he said.

Answering questions at the University at Binghamton, Cuomo said he believes President Donald Trump’s efforts to include a citizenship question on the census form discouraged undocumented immigrants from answering the census, and that that cost the state the seat.

“I do believe the federal government had a chilling effect,” he said.

If a seat is lost, the one certainty is that congressional districts are going to have to get geographically bigger. The 19th and 21st, two of the districts covering the Capital Region, are already among the geographically largest in the state; the 21st runs from Fulton and Saratoga counties through the Adirondacks to Canada, but would need to grow. 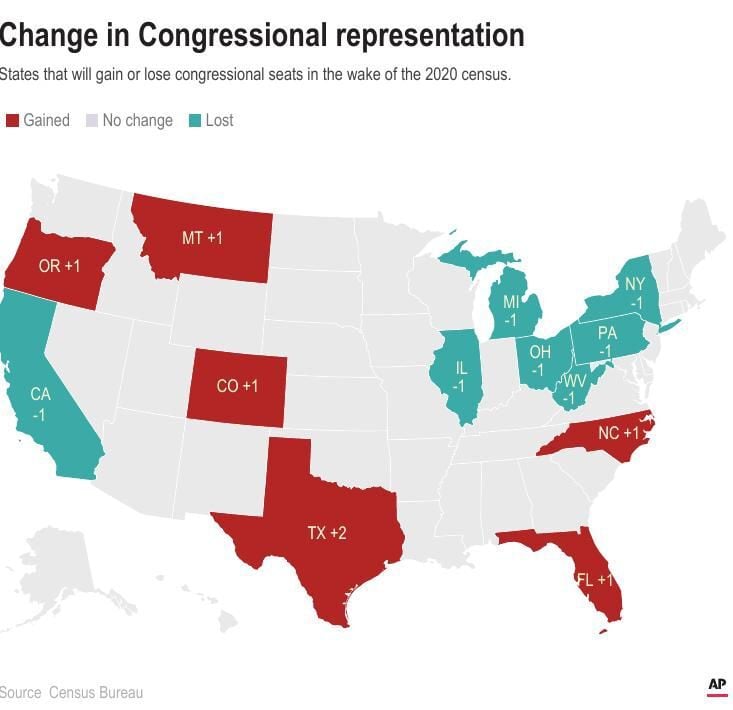 Interestingly, the incumbents in both districts, though political polar opposites, have raised significant amounts of money toward their 2022 campaigns.

U.S. Rep. Elise Stefanik, R-Schuylerville, who represents the 21st Congressional District and has made a number of appearances on national conservative talk-television, raised more than $1.2 million in the first quarter, while 19th District U.S. Rep. Antonio Delgado, D-Kinderhook, has also raised more than $1 million, though more quietly.

“Stefanik’s district is massive,” said Skidmore College political science professor Robert Turner. “It’s always really hard, in that there’s not like a single TV market, so it makes it really hard to campaign. If you’re a challenger, to get name recognition you have to be in three different TV markets.”

The population breakdowns needed to actually set new district boundaries won’t be available until September, but there’s already speculation that the Democrats, who control the state Legislature, could use redistricting to their advantage. For example, the Legislature could place Stefanik and 22nd Congressional District Rep. Claudia Tenney in the same district. Both are outspoken conservative women.

Stefanik, who is considering a run for governor, issued a statement blaming the loss of the seat on Cuomo.

“The fact that Governor Cuomo’s slow walked the census resources in the state is an abomination as we fell 89 individuals short of not losing a congressional seat,” she said. “Sadly, New Yorkers continue to flee our state due to his draconian leadership, high taxes, exorbitant cost of living and rampant crime. I will continue to be a strong voice for my constituents in the North Country and New York who value freedom and feel forgotten by Cuomo and his far-left cesspool in Albany.”

The nonpartisan Cook Political Report’s Dave Wasserman said up to five of the eight seats now held by Republicans could be in jeopardy if Democrats redistrict aggressively.

In recent decades, the state Senate was under Republican control, which forced compromise — or, as in 2010, a deadlock that forced a federal court monitor to draw the lines. This time, the reapportionment is going to be done by a 10-member independent commission, but the commission’s work will be subject to approval by the Legislature.

“The question is, to what extent do the New York Democrats decide to play the kind of political hardball the Republicans have played in places like Texas or North Carolina?” Skidmore’s Turner said.

Previous Census Bureau estimates would indicate the state’s population loss is concentrated north and west of the Capital Region. An analysis by New York Public Interest Research Group found that the Capital Region grew marginally, at just under 1.1 million people — although there remains little question Saratoga County has continued to grow, as it has since World War II.

“All indications are that New York’s upstate region is likely to see some reduction in its congressional representation,” NYPIRG Executive Director Blair Horner said.

E.J. McMahon of the Empire Center for Public Policy also believes what growth occurred was in New York City and counties within commuting distance of the city.

“If that’s the case, the census data will translate into a net shift of five to seven Assembly seats and two to three state Senate seats to the downstate region,” he predicted in a written analysis.

New York’s loss of a congressional seat fits into a long-term pattern of losing influence to other parts of the country. In 2020, it fell from the third to the fourth most populous state in the country, behind California, Texas and Florida.

In 1940, New York state had 45 congressional seats and had the largest population in the country, at 13.5 million. But New York’s percentage of the country’s population has slid downward every decade since, and will drop by another seat — to 26 — with the results of the 2020 census that were announced on Monday.

But the news is better than some observers expected, and better than the state has performed in the last few census counts: It lost two seats in 2000 and 1990, three seats in 1980, and a whopping five seats — from 39 seats to 34 seats — in 1970, as California, Texas and Florida all gained population at the expense of New York and other Northeastern states.

When the results were announced, Republicans wasted no time in trying to pin the loss of a congressional seat on Democrats.

“New York leads the nation in outmigration of residents with 126,000 people leaving last year and over 1 million in the past decade and the state is ranked 50th in the nation for Tax Freedom Day, when residents symbolically pay off all of their federal, state and local tax obligations and start keeping the money they earn,” said state Sen. Jim Tedisco, R-Glenville.

Futuristic pasta is made flat, shapes itself while it boils

Futuristic pasta is made flat, shapes itself while it boils

New York's top court ruled that the state cannot cut down thousands of trees for a 27-mile snowmobile trail in the Adirondack Park without voters approving an amendment to the state constitution.

A New York man has admitted his role in the 2019 killing of a young woman who worked at a deli in Johnstown.

Gun rights activists are hoping a New York legal battle headed to the nation's highest court will determine whether residents have the same right to concealed carry permits as people in 42 other states with less restrictive firearms laws.

Canadians skirt COVID-19 restrictions by going over border as pedestrians

If you think it’s been hard dealing with COVID-19 living in New York, consider the travails of our friends from across the border.

A man shot and paralyzed nearly 30 years ago in Rochester has died from complications from the shooting.

Environmental organizations are appealing a decision to allow a century-old ferry to be sunk in Lake Champlain where it would become an underwater scuba diving destination.

Three Vermont newspapers and a magazine sold to media company

A Massachusetts newspaper company is selling its three Vermont newspapers and a magazine, the company announced Tuesday.

A New York City police officer killed by a suspected drunken driver was hailed at his funeral Tuesday as a humble hero, a doting father and a “perfect picture of the American dream.”

Nursing homes in New York will have to provide a minimum level of staffing under a new bill that the Democratic-led Legislature planned to pass Tuesday.

A month after the state’s April 1 deadline for communities with police departments to submit mandatory police reform plans, the village of Galway in Saratoga County is the only Capital Region community that has yet to comply.