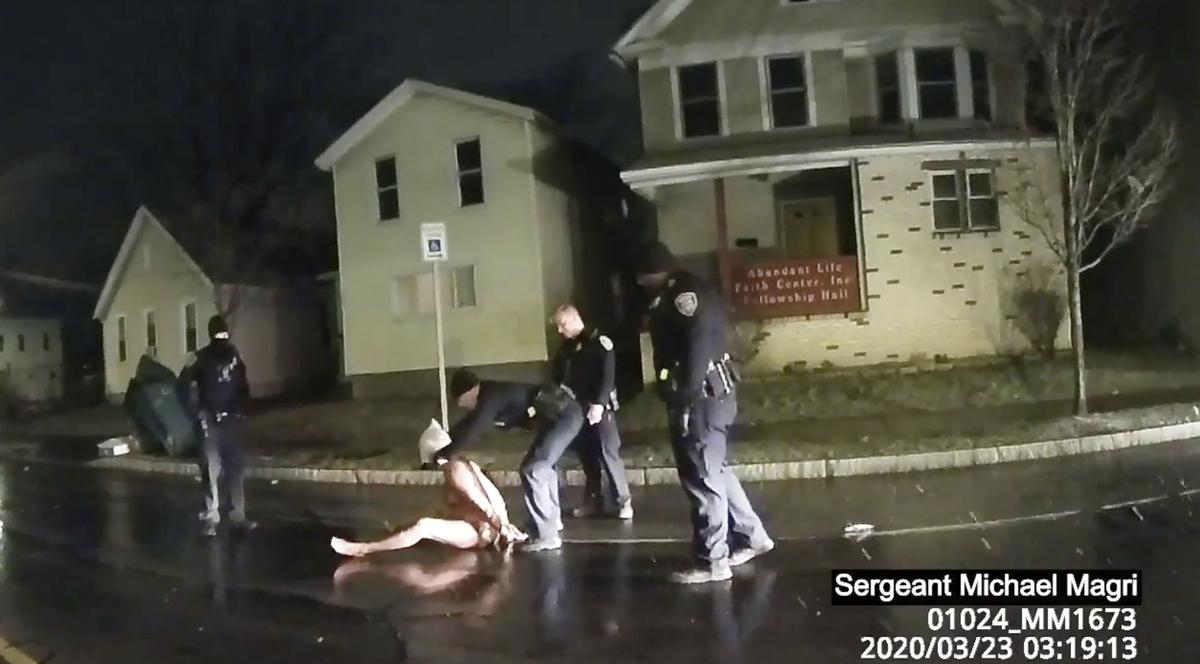 A Rochester police officer puts a hood over the head of Daniel Prude on March 23, 2020, in Rochester. 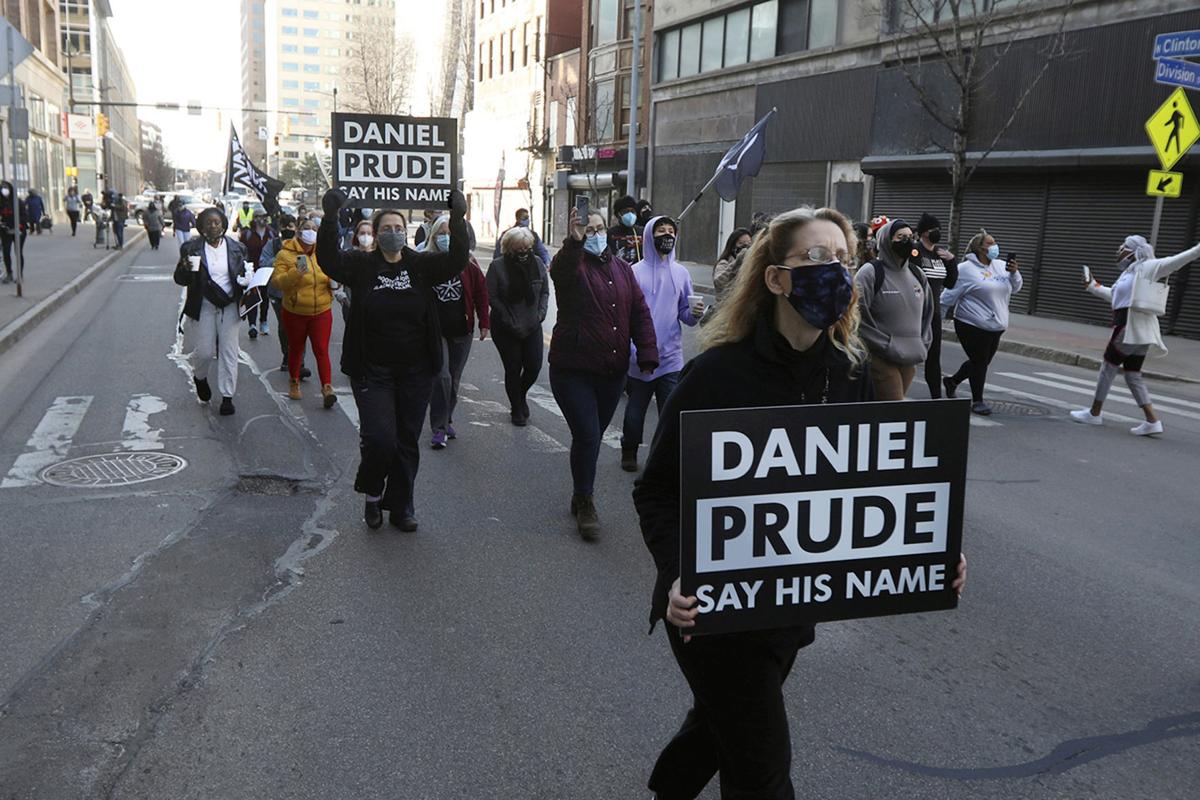 On March 23, demonstrators march to the Transit Center in Rochester to mark the one year anniversary of Daniel Prude's interaction with the Rochester Police that lead to his death.

Prosecutors overseeing a grand jury investigation into the death of Daniel Prude last year in Rochester, New York, undercut the case for criminal charges with testimony from a medical expert who said three police officers who held Prude to the ground until he stopped breathing didn’t do anything wrong.

Dr. Gary Vilke told the grand jury that Prude, a 41-year-old Black man, died of a heart attack caused by the medical phenomenon known as excited delirium. He said the officers’ actions, which included placing a hood over Prude’s head, had no impact on his breathing, according to transcripts of the proceedings made public Friday.

A medical examiner ruled Prude’s death a homicide due to asphyxiation from a physical restraint, with use of the drug PCP as a factor. There is no universally accepted definition of excited delirium and researchers have said it’s not well understood.

Vilke, a University of California, San Diego professor who routinely testifies on behalf of police, said that restraining Prude during the encounter in the early hours of March 23, 2020 may have been best for his safety given his condition.

Asked by a grand juror if anything could have been done better, Vilke responded: “I wouldn’t do anything differently.”

The grand jury ultimately rejected criminally negligent homicide charges against the three officers by a 15-5 vote, the transcripts show.

Prude family lawyer Elliot Shields said it was upsetting to confirm his suspicion that prosecutors had undermined their own case by calling Vilke.

“It’s obvious that they didn’t even try,” Shields told The Associated Press.

He criticized prosecutors for calling as a witness someone he said should have been an expert for the defense at trial. He called Vilke’s assertion that restraining Prude was safer “outrageous.”

“They hired him so that he would come in and they could have cover and say, ‘Well, we tried.’ Well no you didn’t,” Shields said. “You tried to make sure these officers got off scot-free.”

Prosecutors from the state attorney general’s office sought no other charges. They told grand jurors that they could choose not to indict if they believed the use of force was justified. Five jurors indicated they would have voted to indict at least one of the officers.

“You are not an arm of the prosecution and you are to draw no conclusions about, quote, unquote, we think, feel or anything else,” Jennifer Sommers, the deputy chief of Special Investigations, instructed the grand jury, according to the transcripts. “You are an independent body.”

The grand jury’s decision not to indict the officers was announced at the time it was made in February, but the transcripts of nine days of testimony from witnesses — including Prude’s brother, police officers and experts — offer a rare window into a process of accountability normally kept under wraps.

The release of grand jury materials comes at a sensitive time for the issue of race in policing. Testimony is ending in the trial of former Minneapolis officer Derek Chauvin in the killing of George Floyd. And on Thursday, body camera video was released that showed a Chicago police officer fatally shoot 13-year-old Adam Toledo last month after he appeared to drop a handgun and begin raising his hands.

New York Attorney General Letitia James had said, in announcing the grand jury’s decision, that the state had put on the best case it could that the officers should be prosecuted.

Her office defended its use of Vilke as an expert Friday, saying it promised an independent investigation into Prude’s death without a predetermined outcome.

Prude encountered police hours after he was released from a hospital following a mental health arrest. He ran naked from his brother’s home and was seen bashing store windows. Prude’s brother, Joe, testified that he warned an officer responding to his home, “Don’t kill my brother.”

Prude’s death went largely unnoticed until September, when his family released body camera video of the encounter obtained through a public records request. Emails later made public by the city showed police commanders urged city officials to hold off on releasing the footage.

The video showed Prude handcuffed and naked with a spit hood over his head as one officer pushed his face against the ground and another officer pressed a knee to his back. The officers held Prude down for about two minutes until he stopped breathing. He was taken off life support a week later.

Vilke told the grand jury that drug use and mental illness contribute to excited delirium, which can make people vulnerable to cardiac arrest. He said he didn’t think the spit hood was a factor or that the officers obstructed Prude’s breathing.

“So, all those things allow me to be able to be comfortable saying my opinion is that none of the officers, their impact, individually or collectively, would have caused or contributed to that cardiac arrest,” Vilke said. “And, to go even one step further, if he had been allowed to get up and run around ... that would actually be more detrimental than being held down.”

An officer testified that police used the hood because Prude was spitting and they were wary of being sickened in the early days of the pandemic.

“I don’t know if you guys remember exactly about the coronavirus, how we felt, but it was almost hysteria in the country,” the unidentified officer said

At one point, prosecutor Michael Smith drew grand jurors’ attention to a 2015 training bulletin that explained to officers that “positional asphyxia may occur when the position of the person’s body interferes with respiration, resulting in serious injury or death” and that the risk of such asphyxia “can increase when the person is restrained in a prone position.”

The footage of Prude’s arrest and restraint sparked nightly protests in Rochester, a rust-belt city on the shore of Lake Ontario which was roiled recently by body camera footage of white officers using pepper spray on a 9-year-old Black girl handcuffed in the back of a squad car.

James, whose office investigates police shootings, secured a judge’s permission to make the usually secret material public, citing a desire for transparency in Prude’s case. The transcripts were released after a review that involving blacking out the names of witnesses.

Seven officers, including the three involved in Prude’s restraint, remain suspended pending the outcome of an internal investigation.

Matthew Rich, a lawyer for four officers who responded but weren’t involved in Prude’s restraint, questioned the closed-door process that paved the way for the transcripts being released. Despite that, he wrote in a letter to the judge last month that he and his clients “have nothing to hide.”

“If it wasn’t for everything that you presented to us, I don’t think anybody would have come up with a decision. You worked very hard and I’m sure nobody took it lightly,” the juror said. “It was a very serious case. It’s horrible what happened to him.”

A 3-year-old boy died Saturday after he was struck by pickup truck that was backing out of a driveway on Long Island, Suffolk County Police said.

There was a brief time, not long ago, when Elise Stefanik wouldn't say Donald Trump’s name.

A state appeals court said Thursday an upstate New York woman involved in a custody dispute over her multiracial daughter should remove a small Confederate flag painted on a rock near her driveway in the girl's best interest.

A Schenectady man was found shot dead inside a car that crashed into the Motel 6, just across the county line from Rotterdam, police said.

The longstanding Remington gun factory in the Mohawk Valley has reopened eight months after its previous owner closed the plant and laid off hundreds of workers.

As the pace of COVID-19 vaccinations has slowed, New York officials are trying a mix of mandates and incentives to overcome hesitancy, including free subway rides.

Investigators looking into sexual harassment allegations against Gov. Andrew Cuomo interviewed county officials about his “vaccine czar” calling them to assess their support for the embattled governor.

State regulators in New York will soon draft rules that will require employers to protect workers from airborne infectious disease.

The state of Vermont and the Lake Champlain Transportation Company are dropping plans to sink a century-old ferry in Lake Champlain where it could have been used as an underwater scuba diving destination.

A Rochester police officer puts a hood over the head of Daniel Prude on March 23, 2020, in Rochester.

On March 23, demonstrators march to the Transit Center in Rochester to mark the one year anniversary of Daniel Prude's interaction with the Rochester Police that lead to his death.