Become a Member
Read Today's E-edition
Share This
US weather update: Winter storm making trek across US, from Northwest possibly to Atlanta
0 Comments
Share this
If you live in the heart of the South, you might be dreaming of a rare snowy weekend.

Don't get the snow sleds out quite yet.

Yes, a winter storm could bring snow to Arkansas, Mississippi, Tennessee, Georgia, the Carolinas, Virginia and into the Northeast beginning over the MLK holiday weekend.

But there is a kicker to the Weather Prediction Center (WPC) expectation of wintry weather in parts of the Appalachian and Eastern Seaboard this weekend into early next week.

Instead of snowballs, excited children may just be coated in rain, or ice. That's because there is "ample uncertainty" about the forecast, the Weather Prediction Center (WPC) says.

Everything will depend on the track of the storm, something that gets less certain the farther in time a model predicts. Especially if the current data going into the model is lacking.

"It should be stressed that the energy leading to this storm system is still in the data-poor Pacific Ocean at this time, and model and forecast changes, perhaps large, could still occur," the WPC said Wednesday morning.

Snow and ice forecasts feel like trying to get a hole-in-one on a par three in golf, explains CNN meteorologist Chad Myers. "Better golfers can hit the green, but very few shots actually go in the hole."

"Although the track is far from certain, models do tell us that a major winter storm is on the way for some areas of the Southeast and up the East Coast," Myers adds. "Impossible snowy travel, significant ice storm power outages and wind gusts over 40mph are all in play, and right now the track of the storm is key."

What we can say about the forecast

Located over the North Pacific, this system has more than 3,000 miles to travel before impacting the eastern US -- and a few days for forecasters to refine the forecast.

This storm is expected to drop into the Upper Midwest late Thursday into Friday and will likely bring impactful winter weather.

"This next storm system is primed to produce heavy snow and will result in treacherous travel conditions across parts of the Northern Plains and Midwest to close out the work week," warns the WPC.

Winter weather watches are already posted for parts of South Dakota, Minnesota and Iowa for several inches of snow and wind gusts over 25 mph.

Snow will continue southward through Missouri and Arkansas on Friday before some type of winter weather reaches the Deep South over the weekend.

"If the storm tracks farther north than projected, there will be less snow and more ice," Myers says. "Conversely, a storm track that moves farther south will drag down more colder air and change some of that potential ice to snow instead."

This will have a drastic change in who gets what and where.

If the northern route takes place, people in Nashville will see rain and wintry mix before seeing any snow. But if the southern route happens, they will be more likely in the snow the entire time.

"This event certainly has the potential to change, perhaps amounting to no accumulation at all or perhaps producing a bit more than an inch or 2, so stay tuned," the NWS in Nashville says.

It has only been a week since their last snow that snarled traffic and left the city in a blanket of the white stuff.

Depending how far south the storm travels, it could not only bring snow deeper into the South across Mississippi, Alabama and Georgia, but it could also deliver Atlanta's first measurable snow in four years.

Atlanta could see its first measurable snow in nearly 1,500 days

Surprising perhaps to many of you, Atlanta typically doesn't go this long between snowstorms. This Southern city sees over two inches of snow a year on average.

However, "it has been 1454 days since the last time our Atlanta site has seen measurable snowfall, good enough for the 2nd longest streak on record," tweeted the Atlanta National Weather Service office on Tuesday.

Of course, whenever there is a hint of snow in the South, meteorologists start talking about it days and days in advance.

This means there is a HUGE potential that this might not even happen. Which is normal for a forecast four days out from Sunday.

It is plausible that Atlanta could record its first measurable -- 0.1 inches or more -- of snow since January 2018.

It all hinges on cold air and moist air perfectly aligning at precisely the right time. If the cold air arrives too late or the moisture leaves too early, the city will just see drizzly Seattle-like rain. The city could look more like an ice skating rink if the timing between these two air masses is off just a little.

This rain, ice or snow question is one many across the South will be asking the next few days, hopefully consulting their trusted meteorologist with the latest forecasts.

Storm tracks up the East Coast

Snow will certainly fall across the Great Smoky Mountains in the Carolinas and eastern Tennessee. Still, down in the lower elevations, ice will undoubtedly be possible.

If the situation sets up just right, parts of the Carolinas could see a significant ice event.

Overnight Sunday into Monday the, storm pushes through Virginia. At this point, the question is now how far East or West the storm will track.

"As is so often the case with these storms, the track, as well as warm air aloft, are going to be key in who gets an all snow event versus who gets a wintry mix and who may even just get a plain cold rain," the Washington, DC weather office says.

If the storm tracks closer to the coastline or even just off the coast, it will bring more snow for Virginia, Washington and on up I-95 corridor on Monday. But if the storm stays inland, Virginia could see more of a wintry mix, and the major cities up the East Coast seeing mostly rain.

"Guidance is starting to come into at least some agreement that areas west of the I-95 corridor could be in for a high impact winter storm, while the I-95 corridor and areas east still hold some uncertainty,' says NWS Washington. "Virtually all guidance at this point is at least agreeing on a strong low moving up the eastern seaboard, it is just a matter of how close it tracks to the coast."

As is often the case, "20 miles can make all the difference," they add.

About every six hours, another computer model run will come in and meteorologists will frantically start digesting the latest data and making new forecasts.

"The key is to pay attention to the storm, but don't panic," Myers says. "You don't have to go back very far to the big "potential" winter storm around Christmas to find models that completely busted at this longer range."

Photos and video from Virginia's I-95 gridlock

A 31-year-old man in need of a heart transplant in Boston cannot get one because he is not vaccinated against COVID-19. Health experts explain why.

A bridge collapsed in Pittsburgh hours before President Biden is scheduled to visit the city to talk about the infrastructure bill.

Truck with 100 monkeys crashes in Pennsylvania, plus more weird news

The last of the escaped monkeys from the crash of a truck towing a trailer load of 100 of the animals was accounted for by late Saturday.

In one small prairie town, two warring visions of America

One little town. Three thousand people. Two starkly different realities. It's another measure of how division has seeped into the American fabric, all the way to a single street in a small Minnesota town.

The SAT exam will move to a digital format in 2024 and will be shorter, administrators announced. A closer look at the changes and the reasons for them.

As the free N95 masks begin to become available in parts of the U.S., here's what you need to know about getting one.

The U.S. Coast Guard is battling time and currents as it searches for 38 people missing in the Atlantic off Florida, four days after the capsizing of a suspected smuggling boat.

A Texas woman offered $500,000 to another woman at a Walmart in exchange for her child while standing in line at self-checkout this month, according to police.

The boyfriend of slain cross-country traveler Gabby Petito admitted killing her in a notebook discovered near his body in a Florida swamp, the FBI said. 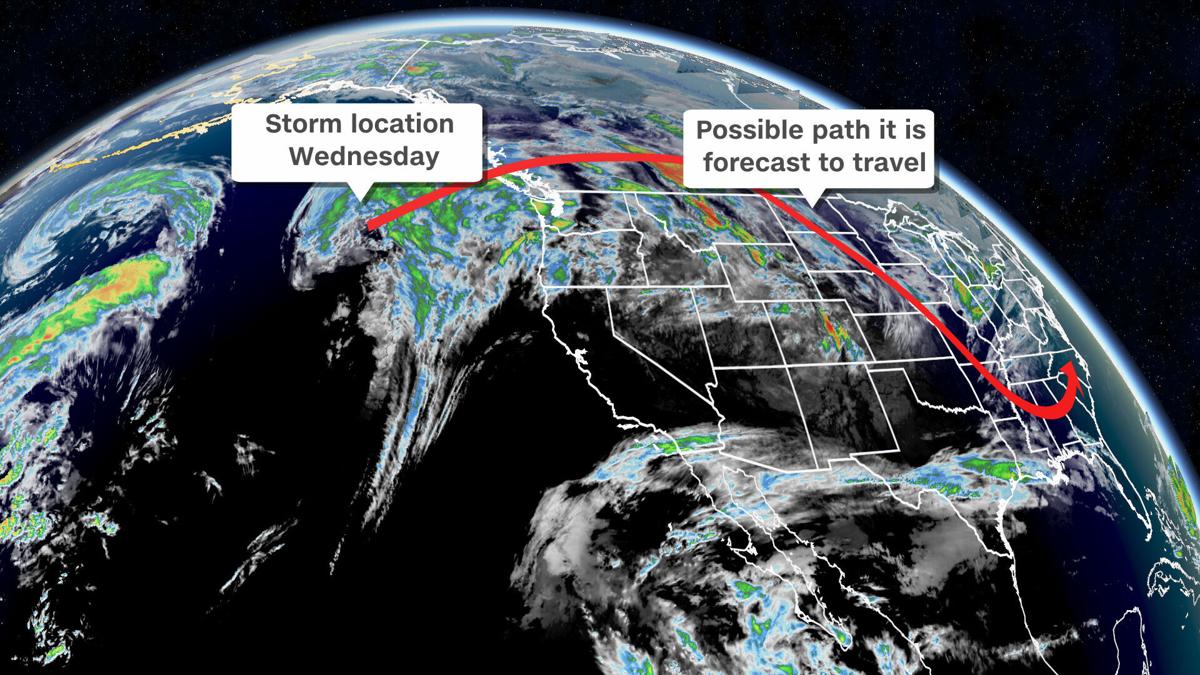 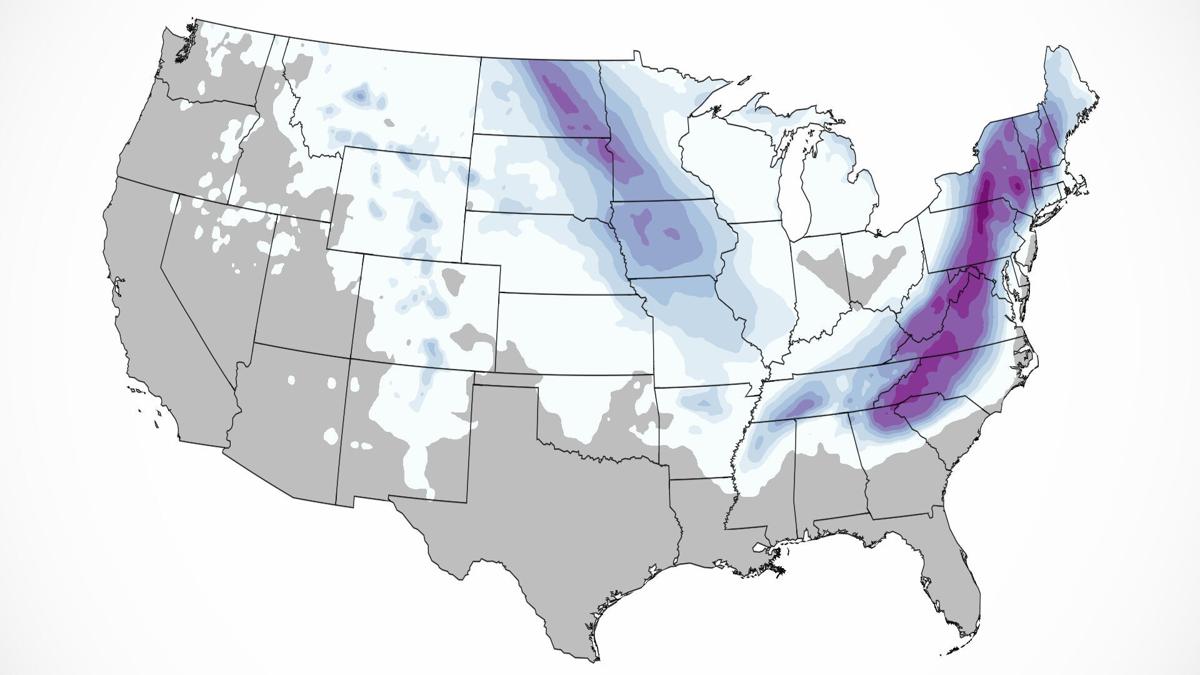 One early weather model run Wednesday morning showed a large swath of snow across the South into the Northeast. But meteorologists caution that images like this can be deceiving. Some of what the model shows could actually come down as sleet or even freezing rain.