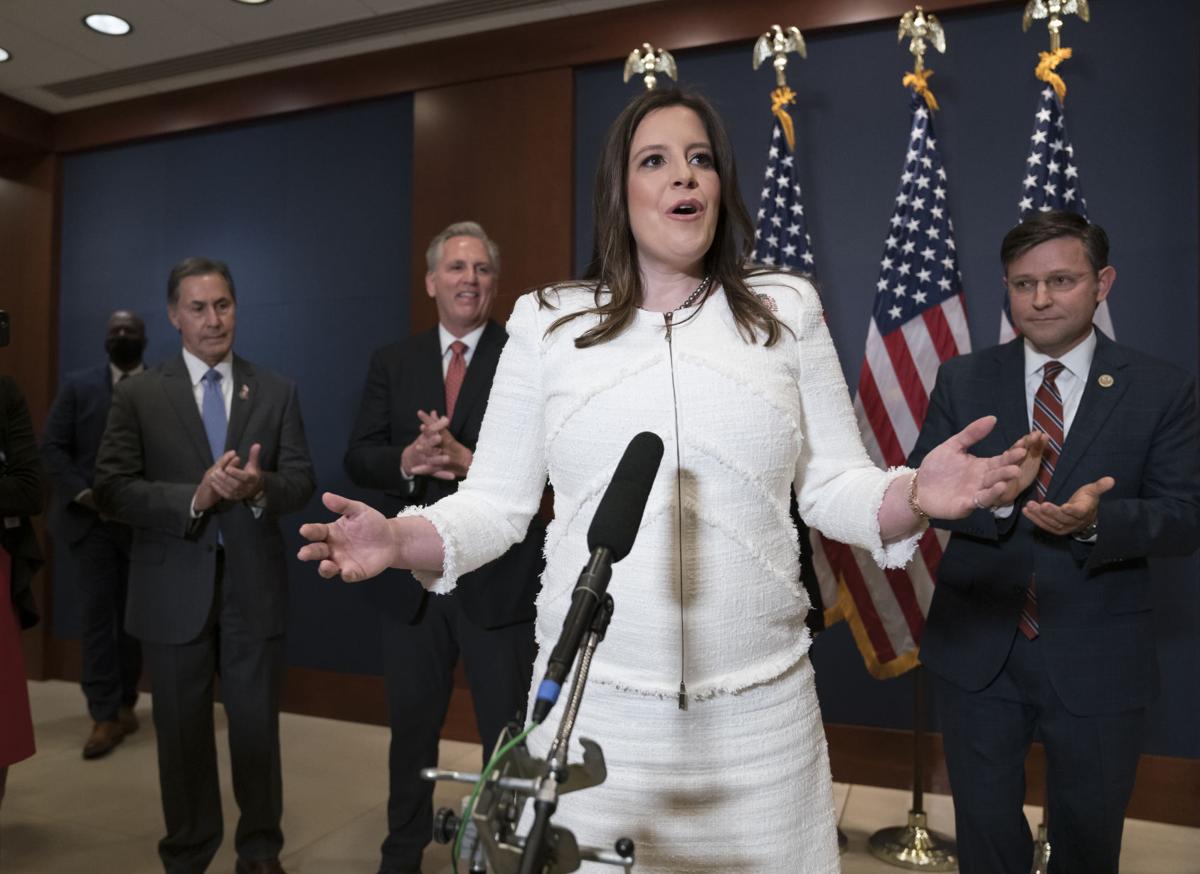 Rep. Elise Stefanik, R-Schuylerville, speaks to reporters at the Capitol in Washington on Friday just after she was elected chair of the House Republican Conference. She is joined by, from left, Rep. Gary Palmer, R-Ala., House Minority Leader Kevin McCarthy, R-Calif., and Rep. Mike Johnson, R-La. 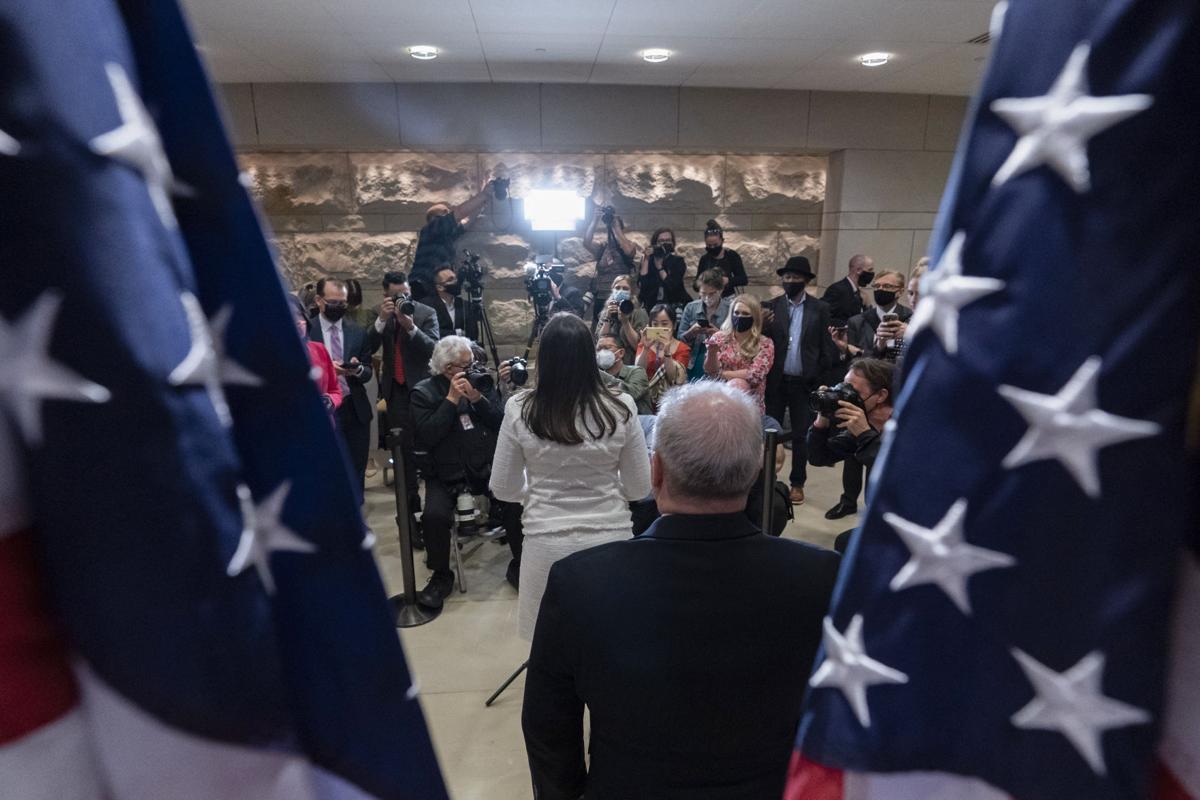 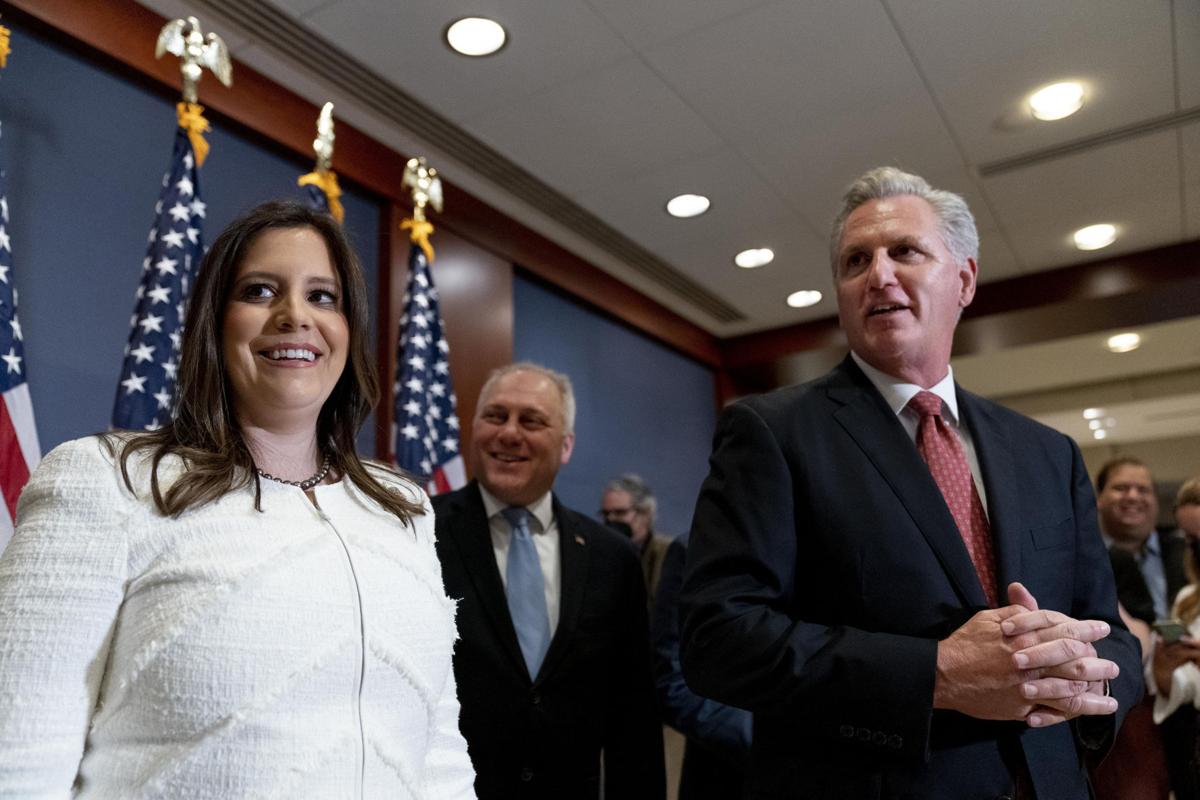 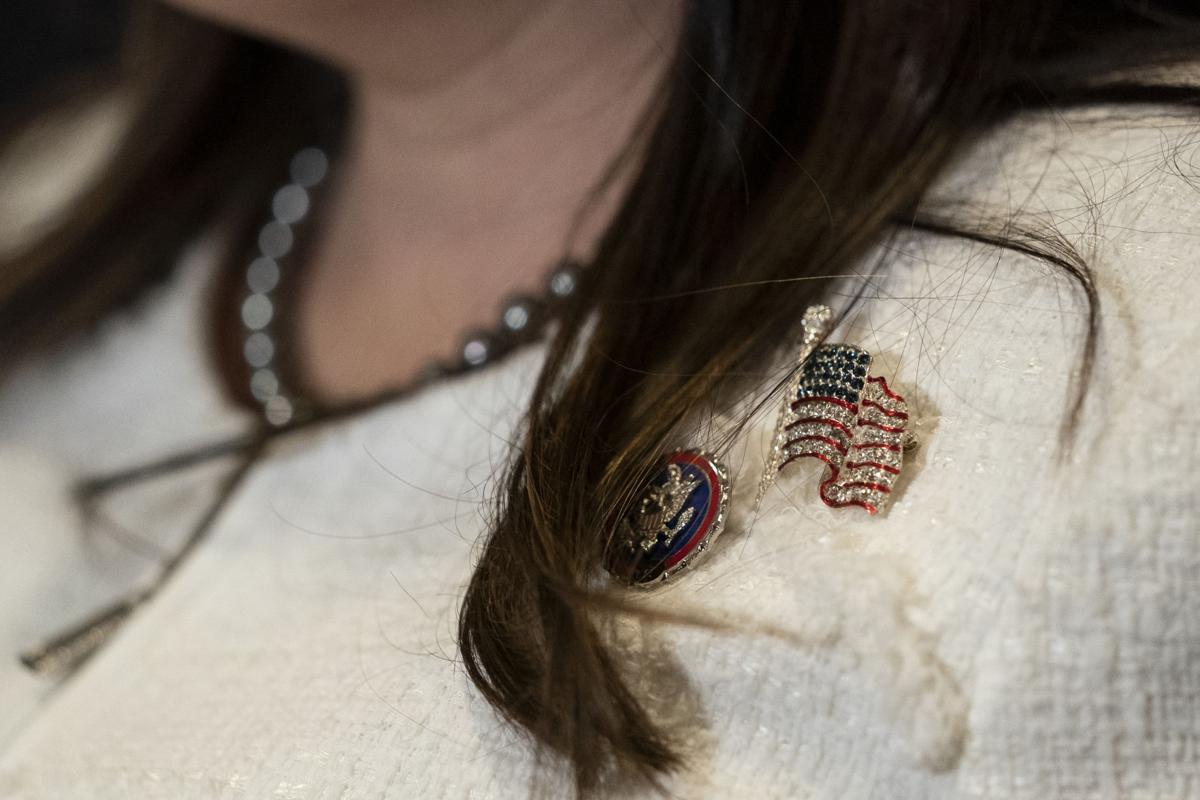 WASHINGTON — House Republicans elevated Rep. Elise Stefanik to a leadership post Friday, highlighting how the party whose lodestar has long been conservative policies increasingly views allegiance to Donald Trump as its indispensable key to electoral success.

Stefanik, a Trump stalwart from upstate New York, was elected to the No. 3 leadership job that until this week belonged to Rep. Liz Cheney of Wyoming. Republicans tossed Cheney from that post for continually calling out former President Trump for helping spur the violent Jan. 6 Capitol insurrection and relentlessly pushing his false claims that voting fraud caused his November reelection defeat.

Local officials and judges from both parties around the country have declared there is no evidence Trump was cheated out of a win.

Stefanik easily defeated Rep. Chip Roy of Texas 134-46 in a secret ballot that gave GOP lawmakers a distinct choice about where to steer the party. Stefanik has a moderate voting record but strong backing from Trump and other party leaders, including some conservatives, while Roy is in the hard-right House Freedom Caucus and was actively opposed by the former president.

In remarks to reporters after her victory, Stefanik underscored how the twice-impeached Trump’s clout within the GOP remains potent, a rarity for a defeated former president. Polling shows strong Trump loyalty among Republican voters, giving party leaders little incentive to ostracize him.

While the GOP defines itself as conservative, Stefanik’s win provided one measure of the diminished role ideology now plays for Republicans.

Her lifetime voting score from the conservative Heritage Action for America is 48, one of the most moderate marks of all House Republicans. That compares to Cheney’s 80 and Roy’s 96.

The conservative Club for Growth, which backed Roy, gives Stefanik a lifetime mark of 35. That is well below Cheney’s 65 and Roy’s 100, and even beneath Rep. Ilhan Omar of Minnesota, a member of the “squad” of young progressive House Democrats, who scored 38.

“I would support Stefanik to be the most likely Republican to join the Squad but not Republican Conference Chair,” tweeted Rep. Ken Buck, R-Colo., who nominated Roy Friday.

“Now, to have credibility in the Republican Party, you have to align yourself with Donald Trump. Everything else is secondary,” said former Rep. Carlos Curbelo, R-Fla., a Trump critic. He called that a short-term “survival strategy,” saying Trump’s appeal nationally is limited and will fade.

Republicans hope Stefanik will help shift attention from their acrimonious purge of the defiant Cheney, and toward their drive to win House control in the 2022 elections. A Trump loyalist who has stood by some of his unfounded claims about widespread election cheating, Stefanik’s elevation gives the GOP a fresh spokesperson who is one of the party’s relative handful of women in Congress.

“We are unified working as one team,” she said.

Yet GOP schisms are unlikely to vanish quickly. Roy’s candidacy signaled that hard-right conservatives will battle for influence, and tensions remain raw over Cheney’s rancorous ouster.

She has said she’ll stay in Congress and use her prominence — as a GOP establishment pillar and daughter of former Vice President Dick Cheney — to try to pry her party from Trump and to work against him if he attempts a White House return in 2024.

Cheney, who did not attend Friday’s GOP meeting, demonstrated anew that she has no qualms confronting her adversaries.

Asked on CNN whether House Minority Leader Kevin McCarthy of California would have let Congress formally certify Joe Biden’s presidential election had he been speaker, she said that was “a legitimate concern.” McCarthy helped engineer Cheney’s ouster.

She told CNN she would have voted for Roy, not Stefanik, to replace her because the party needs conservative leaders who are “committed to the Constitution.” And she said in an interview to be broadcast Sunday on ABC News’ “This Week” that she regretted voting for Trump in last year’s election.

Cheney was among 10 House Republicans who voted in January for Trump’s second impeachment for inciting his supporters’ Capitol attack.

Stefanik has told colleagues she’ll serve in leadership only through next year, then try taking the top GOP spot on the influential House Education and Labor Committee. Her plans were described last week by a Republican lawmaker and an aide who discussed them only on condition of anonymity.

Besides support from Trump, Stefanik was backed by McCarthy and two of the chamber’s most influential conservatives: No. 2 leader Steve Scalise of Louisiana and Rep. Jim Jordan of Ohio.

In the past four presidential elections, Stefanik’s rural district backed Barack Obama twice but then Trump twice. She was a Trump critic during his 2016 campaign, calling his videotaped comments on sexually assaulting women “just wrong” and at times avoiding stating his name.

She sprang to Trump’s attention by defending him in 2019 during his first impeachment over his efforts to pressure Ukraine to produce political dirt on Biden, a Democratic presidential contender at the time.

Roy, a former aide to conservative Sen. Ted Cruz of Texas, voted in January against Trump’s effort to overturn his election defeat, infuriating him. Roy ally Buck, asked if Trump might turn his ire on him as well, conceded as much.

“I’ve been looking for an exit strategy for six and a half years, so if that’s the exit strategy, that’s OK,” Buck said.

A unanimous Supreme Court ruled Monday that thousands of people living in the U.S. for humanitarian reasons are ineligible to apply to become permanent residents.

US has recovered ransom payment made after pipeline hack

The Justice Department has recovered most of a multimillion-dollar ransom payment to hackers after a cyberattack caused the nation's largest fuel pipeline to halt operations last month.

The partially built line was planned to transport crude from the oil sand fields of western Canada to Steele City, Nebraska. Plus: How this rural pipeline became a national climate battleground.

The DOJ under Trump seized records from House Dems; Netanyahu lashes out as rule nears end; Florida supermarket shooting. Plus, the weekend forecast, birthdays and more.

A Senate investigation of the Jan. 6 insurrection at the U.S. Capitol has uncovered broad government, military and law enforcement missteps before the violent attack.

Rash of mass shootings stirs US fears going into summer

Two were killed and at least 30 hurt in overnight mass shootings in three states, stoking concerns a gun violence spike could continue into the summer.

Swaths of internet down after outage at cloud company

Numerous websites, including the New York Times, CNN and Twitch, were unavailable Tuesday after an apparent widespread outage at the cloud service company Fastly.

The FDA on Monday approved the first new drug for Alzheimer's disease in nearly 20 years, disregarding warnings from independent advisers.

Another jump in prices tightens the squeeze on US consumers

American consumers absorbed another surge in prices in May — a 0.6% increase over April and 5% over the past year, the biggest 12-month inflation spike since 2008.

J&J vaccine doses from troubled plant to be released, but many will be tossed, AP source says

U.S. regulators are allowing for the release of 10 million doses of Johnson and Johnson's COVID-19 vaccine from a troubled Baltimore factory. Many batches will be tossed.

Diver describes being nearly swallowed by a humpback whale

Rep. Elise Stefanik, R-Schuylerville, speaks to reporters at the Capitol in Washington on Friday just after she was elected chair of the House Republican Conference. She is joined by, from left, Rep. Gary Palmer, R-Ala., House Minority Leader Kevin McCarthy, R-Calif., and Rep. Mike Johnson, R-La.