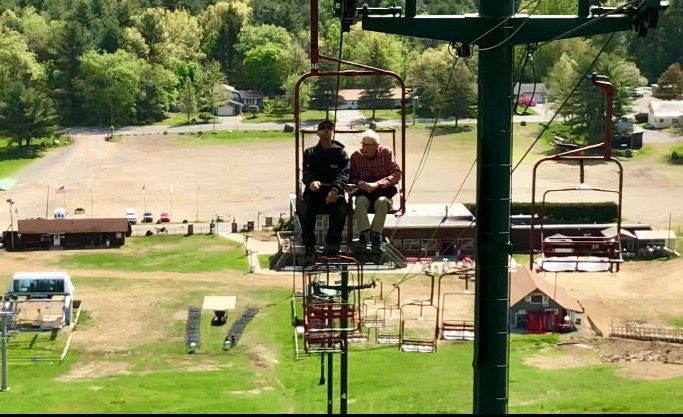 West Mountain employee Bob Smith, left, rides the Face chairlift with 85-year-old Paul Brandt, who with his two brothers started West Mountain Ski Center in 1962 in May. Brandt got the last ride on a lift that was dismantled and is in the process of being replaced this summer. 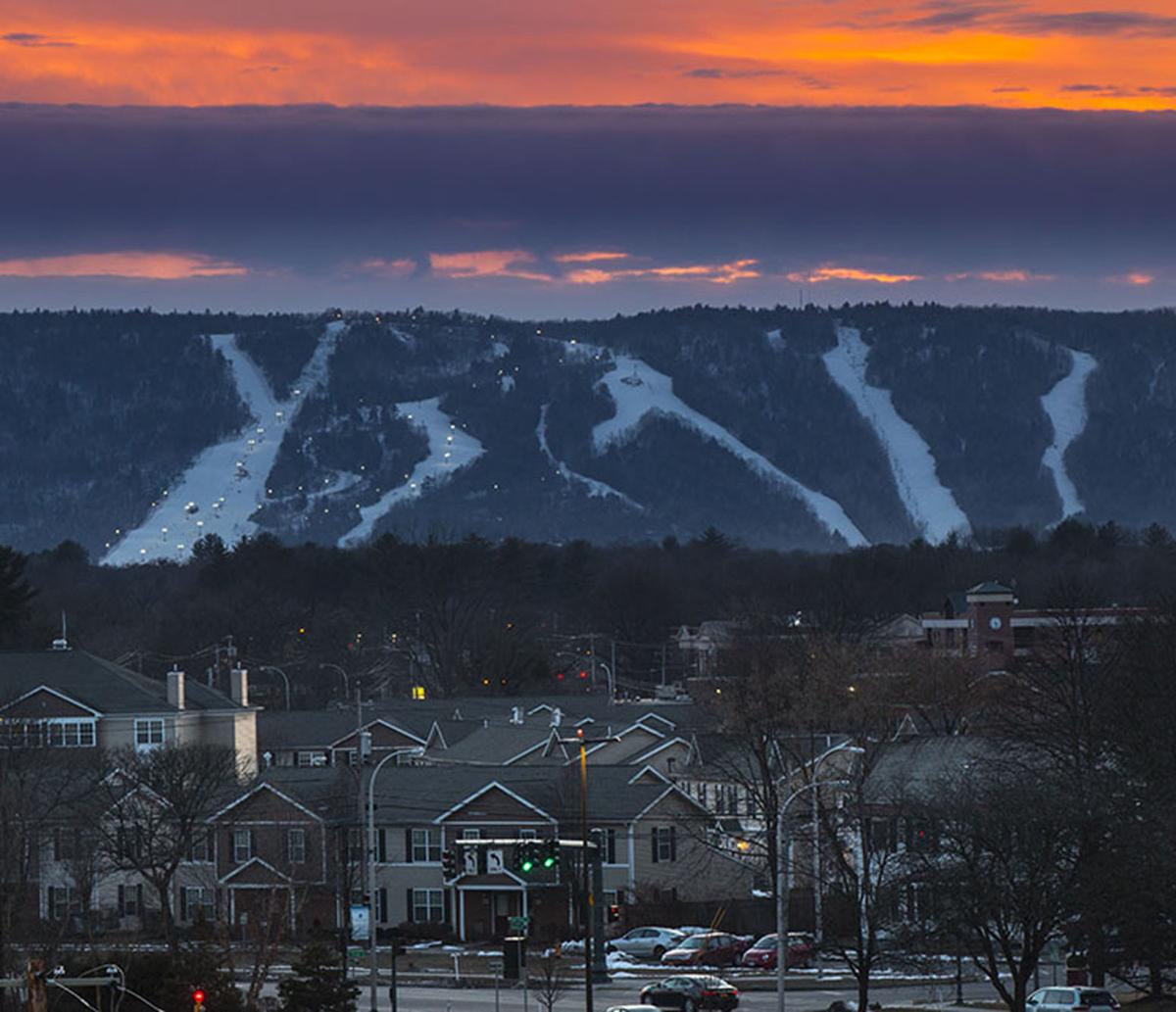 The sun sets behind West Mountain on March 6 as the ski area is illuminated for night skiing and snowboard riding, looking west from Glens Falls. A zip line and adventure course are among plans for the mountain as part of an effort to expand it into a year-round operation.

When West Mountain Ski Center opens next winter, skiers and riders will be riding above The Face trail on a new $900,000 four-passenger lift that will replace the existing lift, which dates back to 1968.

But co-owner Spencer Montgomery said the new lift is just the start of improvements planned at the mountain.

By next summer, if all goes as planned, West Mountain will be a four-season operation, offering both a “treetop aerial adventure course” at the top of the mountain and a 10,000-foot, nine-platform zip line canopy tour “like they have in Costa Rica,” he said.

Montgomery said he and partners Bruce Boswell, Lou Posess and a third who prefers to be a silent partner have refinanced the mountain’s debt and are going all-in to make West a four-season destination.

“We’ve been told by hotel developers it doesn’t work not being a year-round resort,” he said.

Boswell, who moved a branch of Boswell Engineering to the Albany area 30 years ago and whose real estate holdings include the CNA Building and the Godnick’s building that now houses Spot Coffee, said the partners are excited to transform the mountain.

“We need to be open all year round and not just dependent on the snow,” he said. “This is the major step we needed to take to make West Mountain what it’s going to become.”

Montgomery said the new chairlift is needed, because it’s the primary lift for beginners and the old chair was difficult to mount. The new chair will be located next to the new summit lift, opening more skiable terrain on the Face and removing the upper lift shack from the base of the steep Gnar-Wall trail.

“And for lessons it’ll be great, because an instructor can ride up with up to three other people,” he said.

Plans this summer also include revamping snowmaking on the northwest side to bring capacity up to 95 percent of the mountain, including on the most northern AOA trail, which has seldom been open over the years.

For those skiers and riders still eager to see the Northwest triple chair replaced, Montgomery promised that it’s coming.

If a deal to buy a used lift hadn’t fallen through two years ago, the triple chair likely would have been replaced by now. He has about two-thirds of the components needed to replace the lift, but lacks a return station at the summit, eight towers and a cable, Montgomery said.

If he can find the components, that project also might get done this summer, he said, but if he has to pay to fabricate them, it’s likely another year away.

“If I have to fabricate them, it’ll cost about $1 million. If I find the parts, it’s probably half a million,” he said. “That’s a big difference.”

As for the summer attractions, the treetop aerial course will be “basically an obstacle course in the trees,” much like the popular Adirondack Extreme courses in Bolton Landing. It will have three hubs and six courses off those hubs, he said.

The zip line, unlike the one in Lake George, will zigzag visitors through the trees down the mountain from the main summit to the Northwest side and back, landing on nine platforms along the way. It will go over the summit chairlift and is envisioned to operate year-round, he said.

The company that will be doing the work, Tree-Mendous Aerial Adventures, from the southern part of the state, has done numerous projects, including one at the Bronx Zoo, he said.

“It’ll be a two- to two-and-a-half-hour canopy tour. You’ll be getting your money’s worth,” he said. “You’ll be covering a lot of ground — in the air!”

Montgomery said he has met with Queensbury Supervisor John Strough and Town Planner Craig Brown, and both have been supportive, but they want to see a master plan for all of the improvements, which Montgomery said could also include an expanded base lodge.

That meeting should happen in June, he said.

Strough said he’s praying for snow next winter, because his season pass is already purchased.

“It’ll be a wonderful asset for the town. But maybe we’ll have to change the name — to West Mountain Adventure Center and Ski Center,” he said.

Mike Brandt, who with his two brothers opened the mountain in 1962, praised the current owners and their vision. He said he knew the mountain needed to diversify to improve, but he lacked the capital to make it happen.

“I think they’re doing all the right things and I applaud them,” he said. “I think it’s wonderful.”

Blog: Counting down to snow making

The calendar has turned to August and believe it or not ski mountains are less than 100 days and counting away from starting snow-making operations.

QUEENSBURY — West Mountain Ski Area will feel like a new place this season, with a renovated cafeteria, snowmaking equipment and chairlift and…

West Mountain employee Bob Smith, left, rides the Face chairlift with 85-year-old Paul Brandt, who with his two brothers started West Mountain Ski Center in 1962 in May. Brandt got the last ride on a lift that was dismantled and is in the process of being replaced this summer.

The sun sets behind West Mountain on March 6 as the ski area is illuminated for night skiing and snowboard riding, looking west from Glens Falls. A zip line and adventure course are among plans for the mountain as part of an effort to expand it into a year-round operation.