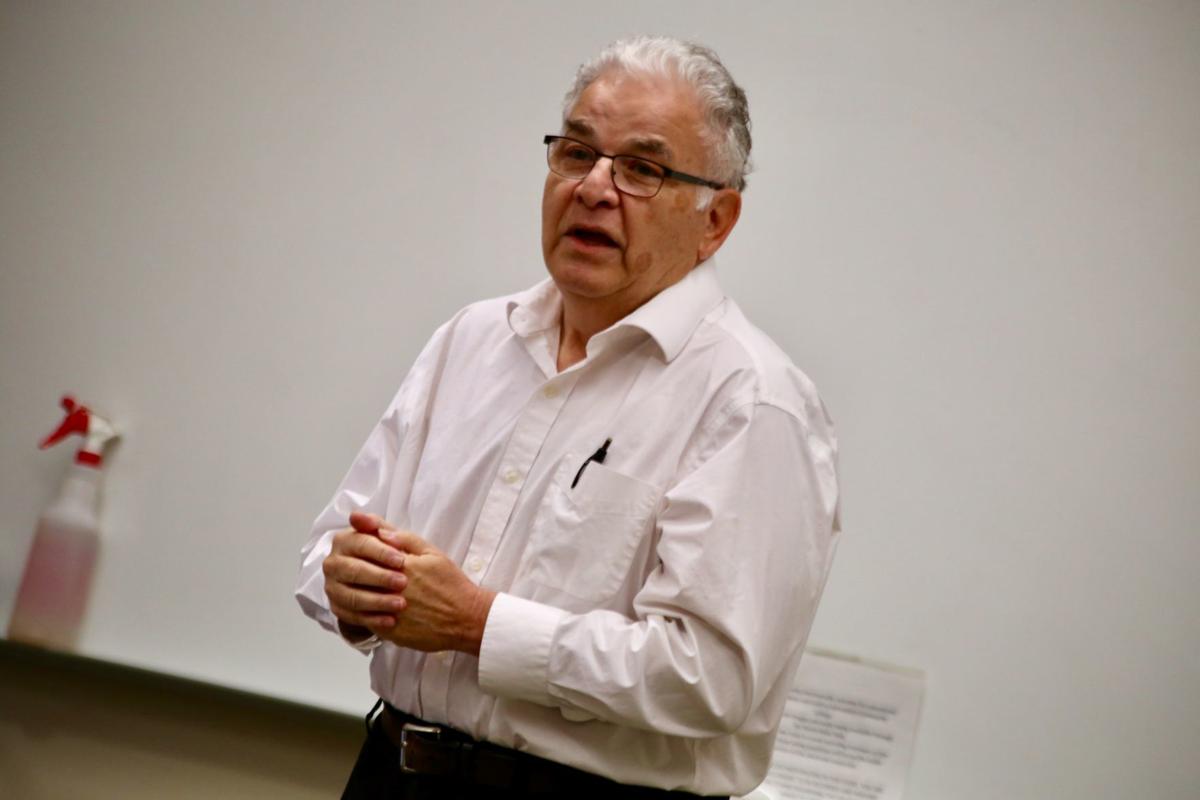 Neil Seldman, director of the Waste to Wealth Initiative at the Institute for Local Self-Reliance, gives a talk about recycling and zero waste on Thursday at SUNY Adirondack in Queensbury. 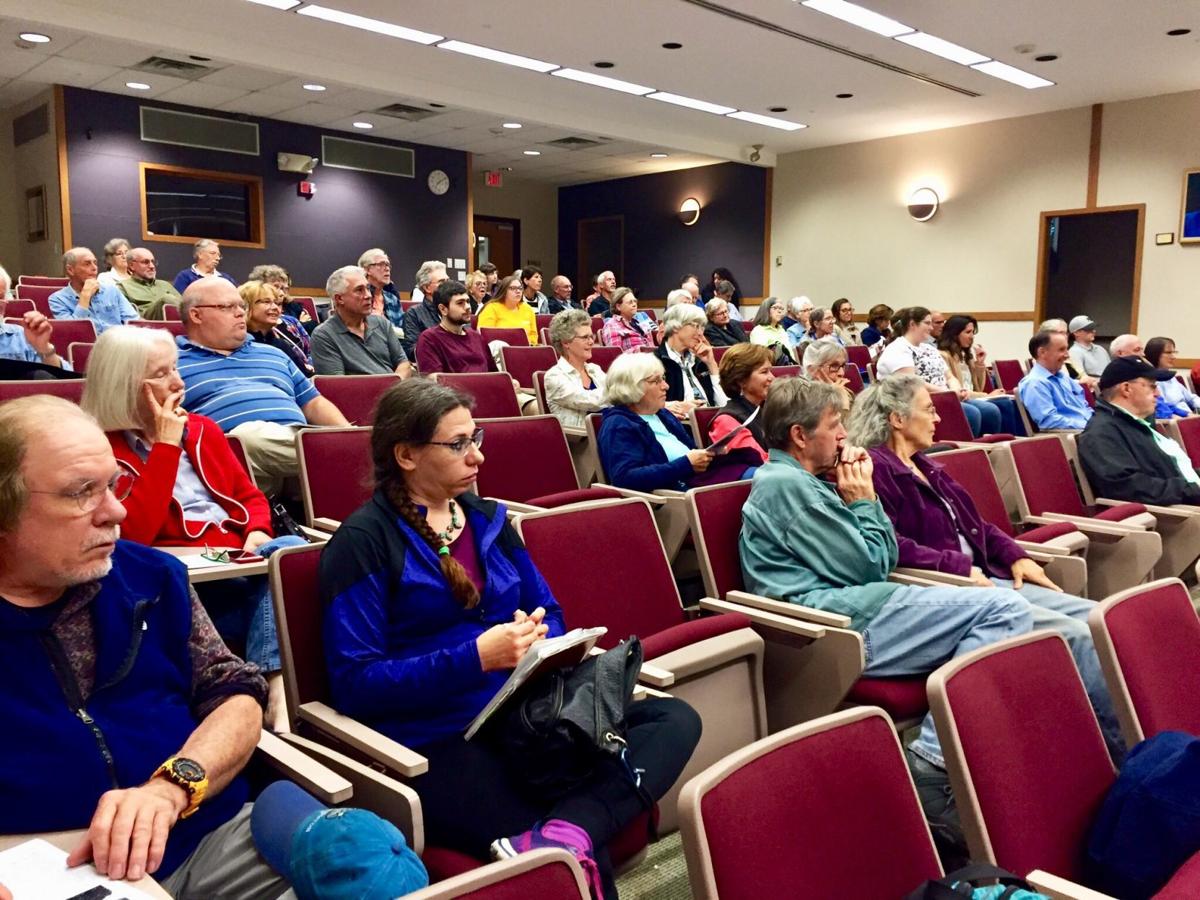 Dozens of community members listen to Neil Seldman, of the Institute for Self-Reliance, talk about recycling and zero waste on Thursday night at SUNY Adirondack in Queensbury. 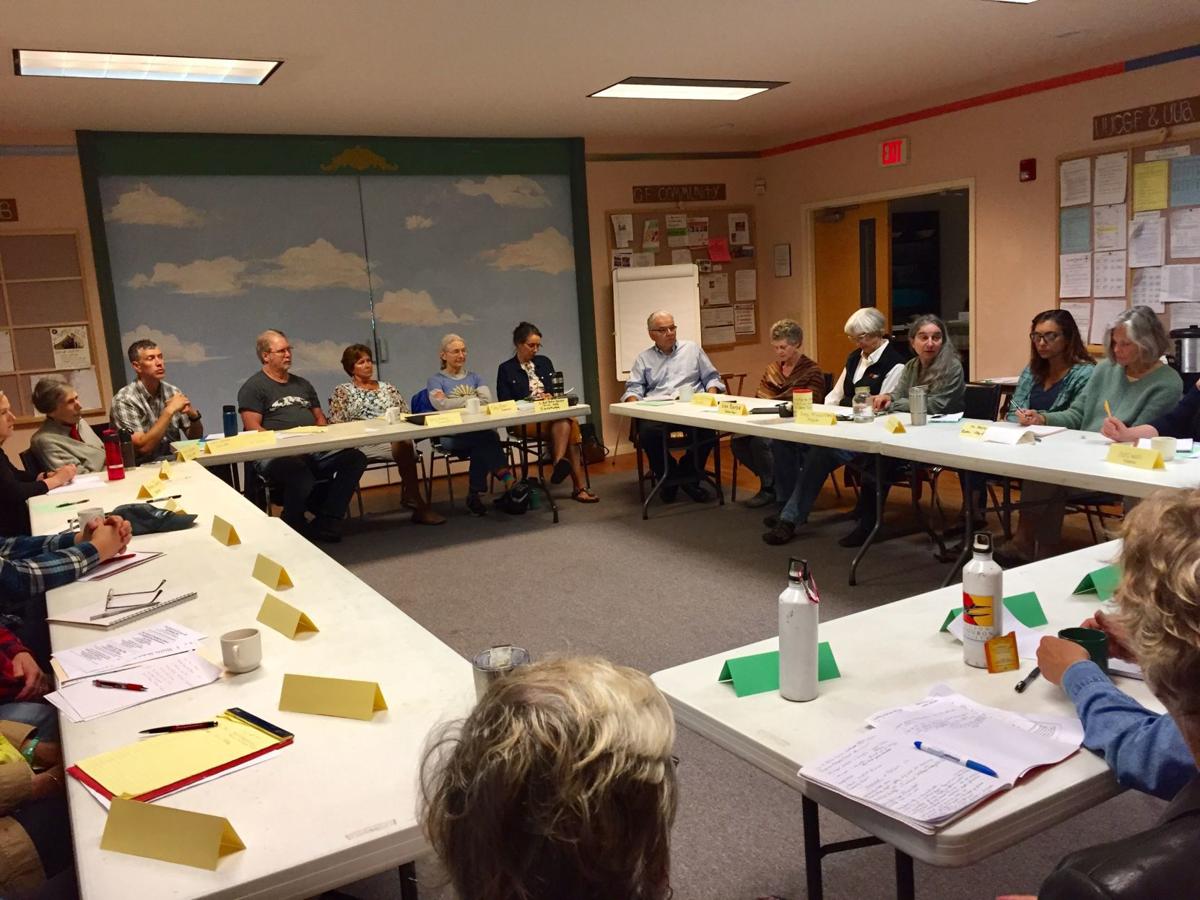 Community members and members of the Clean Air Action Network meet on Friday to discuss zero waste strategies at the Unitarian Universalist Congregation of Glens Falls in Queensbury.

Neil Seldman, director of the Waste to Wealth Initiative at the Institute for Local Self-Reliance based in Washington, gave a historical overview of recycling and the challenges communities face today. He spoke Thursday evening at SUNY Adirondack, invited by a local nonprofit group, the Clean Air Action Network.

He also made suggestions for communities to get to “zero waste.” Zero waste technically means diverting 90% of waste and having no organics in a landfill, Seldman explained.

The Clean Air Action Network is hoping local communities will implement strategies and programs that could help them move toward that 90% diversion, which could eventually push the Hudson Falls trash incinerator to close. The network is pushing for the incinerator’s closure because it’s concerned about the pollution it emits.

Reflecting on the past, Seldman talked about how he used to bring his father’s shirts to the “shirt hospital” to get the collars repaired. Audience members reminisced about getting their milk refilled in glass bottles. Recyclables used to be cleaner because paper was separated from the plastics and glass.

Since garbage incinerators and single-stream recycling were introduced, however, Seldman said our trash problem has gotten bigger.

Many people blame China for our national recycling problem. Originally, the country was taking American recyclables that were 30% to 40% contaminated, but in 2017, it stopped.

“Everybody wants U.S. waste, and the alarm the Chinese set off is wonderful because we’re cleaning up our mess,” Seldman said. “The pot of gold at the end of the garbage rainbow is having clean recyclables.”

Seldman thinks communities should nix single-stream recycling and go back to dual sort. He also suggested communities get their own regional industrial park to collect recycling and compost, and their own landfills so they can control what kind of garbage goes in it.

Other things Seldman thinks communities should do to reduce their waste include putting higher taxes on single-use plastics and implementing unit pricing on trash, so you pay for how much you put out on the curb and not a blanket monthly fee. Composting and recycling would be free, however.

Communities that have implemented unit pricing have reduced their waste by 40%, Seldman said.

On Friday morning, nearly 40 people gathered inside Queensbury’s Unitarian Universalist Congregation of Glens Falls, where Seldman mapped out some more specific strategies for getting to zero waste.

He shared contacts for planning help, made suggestions on approaching town and village boards and discussed what other communities have done to reduce their waste.

A few local officials from Warren and Washington counties attended one or both events.

Bob Henke, chairman of the Washington County Board of Supervisors and a former state Department of Environmental Conservation employee, was present at the Thursday night talk.

“The concept is sound, but I think the logistics, not only with New York state government regulations, but also with the rural nature of our area and those challenges, I think it will take a little more work,” Henke said in a phone interview Friday.

Many of the communities Seldman referenced in his talk were large, urban areas, and Henke said rural communities have challenges that make it more difficult for some of those ideas to come to fruition.

For example, the county is 62 miles long.

“There’s not a straight road going anywhere, and collecting recycling in lower White Creek and the middle of Hampton is as big a need as anywhere else,” Henke said.

Hampton may only have 12 pounds to collect in a day trip, too, whereas a place like Baltimore might collect 2,000 pounds a day, Henke said.

The reality of getting a local landfill, too, is unlikely, Henke said, when part of the county is in the Adirondack Park.

As supervisor for the town of Argyle, too, Henke said a number of residents showed up in protest of an animal carcass composting facility that was recently approved. Some of those residents against it were at the zero-waste talk.

Catherine Atherden, a Queensbury Town Board member, attended both the talk and workshop and said Friday that she thought local municipalities could accomplish a lot.

She was also looking into a DEC grant program that assists with municipal waste reduction and recycling, and hoped the town might apply for funding by the Oct. 31 deadline.

“We have to have this culture change of waste reduction,” Atherden said. “We also need the economical viability of all of it, and most of it is economically viable. It would save money. It would create jobs, and it’s all very positive.”

Editorial: There has got to be a better way to dispose of garbage

Forced to choose between burning our trash at the Hudson Falls incinerator or disposing of it in a landfill, neither is a good option. Two meetings this week might provide some clarity of how we go forward.

GLENS FALLS — A national environmental advocate took a look at air-quality data available in the Glens Falls region, and said of the top three…

ARGYLE — An Argyle large animal composting facility on Route 40 was approved last week by the Argyle Town Board, and while there were some que…

HARTFORD — Taking a walk behind Argyle’s Tamarack Valley Trailer Park, down Coach Road and onto Pope Hill Road has become an increasingly unpl…

Neil Seldman, director of the Waste to Wealth Initiative at the Institute for Local Self-Reliance, gives a talk about recycling and zero waste on Thursday at SUNY Adirondack in Queensbury.

Dozens of community members listen to Neil Seldman, of the Institute for Self-Reliance, talk about recycling and zero waste on Thursday night at SUNY Adirondack in Queensbury.

Community members and members of the Clean Air Action Network meet on Friday to discuss zero waste strategies at the Unitarian Universalist Congregation of Glens Falls in Queensbury.