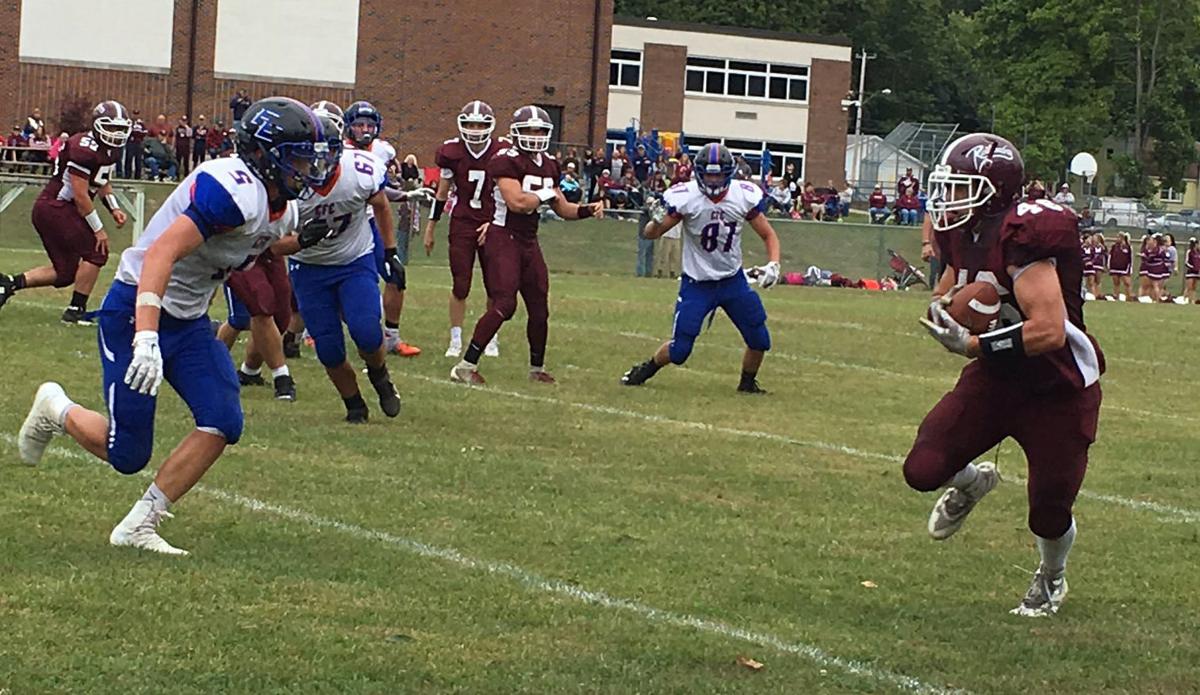 Whitehall's Brendan Covey runs in the open field with Corinth-Fort Edward's Will Denton in front of him during a game this fall.

Whitehall Junior-Senior High School is seen in this file photo. The Board of Education on Dec. 16 voted 5-2 not to pursue a football merger with Granville

WHITEHALL — Granville school officials will have to find a new partner for the school's football program, as the Whitehall school board has decided against a merger.

The board on Dec. 16 voted 5-2 not to enter into any merger with Granville, instead preferring to see if Whitehall can recruit more players to keep its own program going.

In November, the Whitehall school board postponed a decision to get more information. Among board members’ concerns were that Whitehall athletes will have no field to play on next year, as the district is in the midst of a capital project. Also, there seems to be less interest in the sport overall.

Granville school officials wanted a decision one way or the other, and Whitehall Superintendent Patrick Dee brought the issue back to the board.

Board member Chris Dudley said he is concerned about the long bus ride students will have to get to practice. He worries they will not want to play football.

“It’s going to put more time on the end of the day,” he said.

Dudley added that students seem to have less interest in athletics.

“These kids are working after school to pay for $100-a month cell phones,” he said, adding that he was open to other ideas to spur interest.

Board Vice President Frank Barber asked if any discussion had taken place in Section II about going to an eight-man football program.

No such discussions have been held, Dee said. Other schools in the section have talked about merging programs.

Barber also asked if Dee had reached out to other districts, such as Hartford and Fort Ann, about merging.

The district has 23 returning players on paper, according to a school official. About nine are freshmen, however, and Redmond is concerned about the experience level.

The board ultimately decided to wait and see.

“I think we owe it to the coaches in the district to do some recruitment, see where the numbers are,” Barber said.

Dee wondered if the district is attempting to breathe life into a sport that does not excite much interest anymore.

Over at Granville, Superintendent Thomas McGurl said in an email that Whitehall would have made a logical partner, because of its location and because the districts already run a joint cross-country program.

But McGurl said he believes the district will have sufficient numbers for a team in 2020.

“We will be doing our best to increase participation as our roster will be smaller than we would like, but at this time, we do anticipate a team,” he said.

School officials are looking to other districts for partnerships — not just for sports — but for academics as well.

“Granville offers a wide array of agriculture, technology, and advanced placement courses. We want to increase the enrollment in those courses by opening those opportunities to other schools that may not have the same offerings available for students,” he said.

For example, Granville has been offering five sections of marine science over the years.

The district has two distance learning classrooms and is considering adding a third, McGurl said.

“Declining enrollments and financial pressures compel us to look for new ways to meet our educational mandates and provide increasingly rich educational experiences for children,” he said.

Discussion around a potential athletics merger between Whitehall and Granville Central School Districts has been removed from tonight's Board of Education agenda.

The Granville school board will host a discussion regarding a potential athletics merger with Whitehall Central School District at its regular monthly meeting Monday night.

The Whitehall Board of Education heard preliminary information on a possible athletics merger with Granville Monday night with a focus on the long-term sustainability of the football program.

Strength program paying off at Granville

The strength and conditioning program that John Irion brought with him when he moved from Queensbury to Granville in 2017 is beginning to bear fruit.

Whitehall-Granville football merger off, for now

Whitehall and Granville will not merge football programs in 2020 but the possibility of a merger is still open for 2021.

Whitehall's Brendan Covey runs in the open field with Corinth-Fort Edward's Will Denton in front of him during a game this fall.

Whitehall Junior-Senior High School is seen in this file photo. The Board of Education on Dec. 16 voted 5-2 not to pursue a football merger with Granville