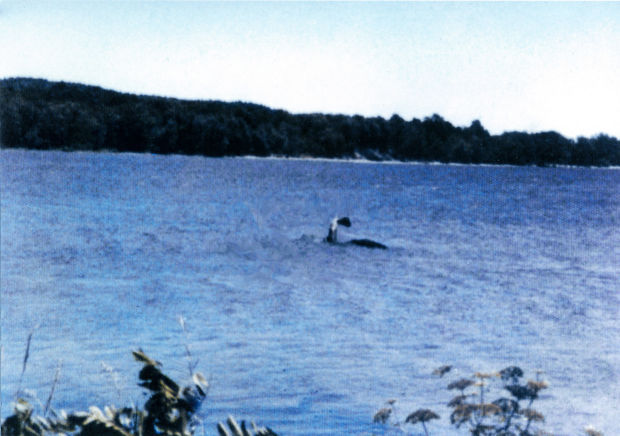 Sandra Mansi’s controversial photo reportedly taken in July 1977 at Lake Champlain. When it was released in 1981, it caused a global sensation. (credit Sandra Mansi). 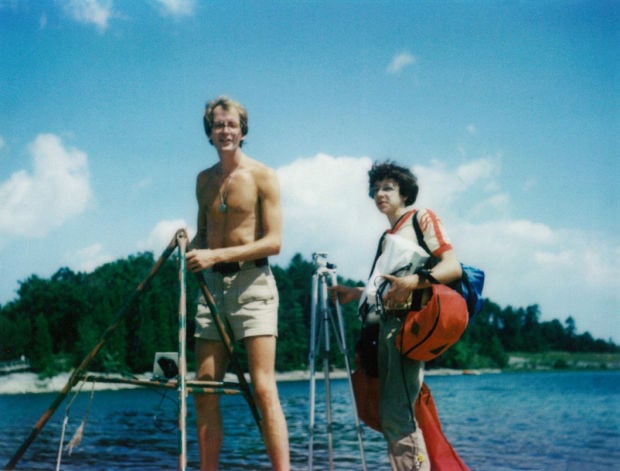 Joe Zarzynski assembling a sonar tripod near Button Bay in the 1980s with Paul Bartholomew. He believed that this was the most likely site of the Mansi photo. (Robert Bartholomew photo).

Long before Loch Ness had a monster tourist attraction, Lake Champlain was making national headlines with a giant fish story of its own.

“I have been collecting articles on the Champlain monster for 30 years. I’ve always been fascinated by it,” said Bartholomew, a Whitehall native who now teaches history at Botany College in Auckland, New Zealand. “I actually got the idea to do this book a couple of years ago. I was surprised by how little actually had been published on the subject – and hardly anything on the history of the monster.”

The book doesn’t set out to prove or disprove the existence of Champ, but Bartholomew, who describes himself as a “sympathetic skeptic,” documents detailed accounts of sightings and people along the way who have profited from the lake’s mysterious reputation.

“I think local residents deserve to know what is a legitimate part of their own history — 90 percent of what is in the book hasn’t been published before. It’s a warts-and-all biography,” he said.

Bartholomew’s “untold story” is as much about people as it is about Champ.

“It’s the human element that is so remarkable and surprising to me. It’s a case study in human nature,” he said of the monster phenomenon that has bubbled from the waters of Lake Champlain.

For small communities on the lake, the legend of Champ is both a source of conversation and income.

In Port Henry, a sign erected by the Town of Moriah/Port Henry Chamber of Commerce lists the names of people who claim to have seen the creature through the years, and the town bandstand is festooned with a sea serpent weathervane. Champ merchandise, like T-shirts and keychains, also have been a staple in local shops for years.

“I’ve got a little Champ sitting right here on my desk,” Thomas Scozzafava, Moriah’s supervisor, said, noting a clay model made by his grandson.

For local residents, Champ has become as much a part of the region’s history as Fort Ticonderoga. Port Henry even passed legislation for the protection of Champ, according to Scozzafava.

“I think most people here believe something is out there,” he said.

But Champ’s reputation continues to extend far beyond the lake’s shore.

“It obviously brings people to the area for possibly a glimpse,” Scozzafava said. ”We’ve also had a lot of exposure on national television. National Geographic was here not that long ago.”

Some cryptozoologists, researchers who focus on “hidden” creatures like Bigfoot and Nessie, have speculated that the monster, if it does exist, could be a surviving plesiosaur or zeuglodon — animals thought to be extinct for at least 60 million years. Other critics speculate that people actually have seen sea lions or garpike.

Whether Champ is really an undiscovered dinosaur or the misinterpretation of a familiar aquatic creature, one thing is certain — it has become a cash cow.

“There is some compelling evidence for Champ. There have been some great sightings, especially in the 1800s,” Bartholomew said.

In the 19th century, reports of the Lake Champlain sea serpent became common in New York and Vermont newspapers — and the hoopla attracted the attention of the national media before an alleged creature in Scotland started making waves.

The newspaper attention brought a lot of fame to the Lake Champlain region. Even P.T. Barnum wanted to cash in on the phenomenon, offering $50,000 in 1873 for anyone who could produce a carcass of the “Champlain Serpent.”

Mass hysteria surrounded surges of Champ reports. Although the creatures seemed to sit at the bottom of the lake without any sightings for years, a single story of his resurfacing would spark a new wave of alleged encounters — and hoaxes.

Getting to the murky bottom

Bartholomew finds the “behind-the-scenes shenanigans” as fascinating as the lore of the creature itself.

“Champ very well may exist, but independent of that, a lot of Champ researchers have been very dubious,” he said. “It’s stranger than fiction.”

The book details the background of one of the most famous pieces of “evidence,” a photo reportedly taken in 1977 by Sandra Mansi, and the controversy surrounding its release. The iconic images has never been proved to be a hoax, despite the fact that Mansi either lost, burned or buried the negative — a story that has changed in several accounts. Bartholomew also writes about the search for the exact site where the image was taken, which the photographer herself has not been able to remember.

“There are so many oddities about this photo,” he said.

Bartholomew also tells the story of the rivalry that developed between Philip Reines, a media professor at the State University of New York at Plattsburgh, who was featured in a Reader’s Digest article in 1978 for his Champ knowledge, and Joseph Zarzynski, founder of the Lake Champlain Phenomenon Investigation, as a result of the Mansi photograph.

Since the 1980s, the publicity surrounding the Mansi photograph has inspired a slew of seekers to the lake, and many have managed to generate a great deal of media hype on their own.

Bartholomew is critical about several figures who have made a name for themselves through their alleged searches for the elusive creature. One “hunter,” Elizabeth von Muggenthaler, led a research team in 2003 to the lake to use biosonar technology to detect Champ through sound.

Another, Dennis Hall, created a nonprofit organization, ChampQuest, in an effort to locate the animal, which he dubbed “Champtanystropheus” (a baby Champ is “Tanystropheus”).

“These people are giving Champ a black eye,” Bartholomew said.

The author also criticizes writers who have continued to repeat incorrect information surrounding Champ. In a 1970 Vermont Life magazine article, Marjorie Lansing Porter wrote that in 1609 French explorer and cartographer Samuel de Champlain had the first recorded sighting of Champ. Bartholomew turns to Champlain’s own logs to discredit the myth that has continued to be circulated since the magazine’s publication — even appearing as the first entry on the “Champ Sightings” sign in Port Henry.

“This book is a case study in shoddy journalism. Journalists really got it wrong, and then they repeated it over and over again,” Bartholomew said.

No hard evidence of the monster’s existence has surfaced despite decades of concentrated searches, but people continue the pursuit.

Local residents and tourists alike continue to scan the waterline of Lake Champlain for a peek at Nessie’s older American cousin.

“I haven’t really heard of any Champ sightings, so to speak, lately. Maybe’s he’s taking a little bit of a vacation,” Scozzafava said.

But as long as people want the sea serpent to exist, then it is real.

“Like Santa Claus and the Easter Bunny, there are a lot of kids out there who very much believe in Champ,” Bartholomew said. “To a certain extent, we need our monsters.”

Looking back at local history: Jan. 19

Take a look back at local history. Here are the top stories for Jan. 19 from one, five and 10 years ago.

Toddler takes her first steps thanks to prosthetic legs

Toddler takes her first steps thanks to prosthetic legs

Sandra Mansi’s controversial photo reportedly taken in July 1977 at Lake Champlain. When it was released in 1981, it caused a global sensation. (credit Sandra Mansi).

Joe Zarzynski assembling a sonar tripod near Button Bay in the 1980s with Paul Bartholomew. He believed that this was the most likely site of the Mansi photo. (Robert Bartholomew photo).