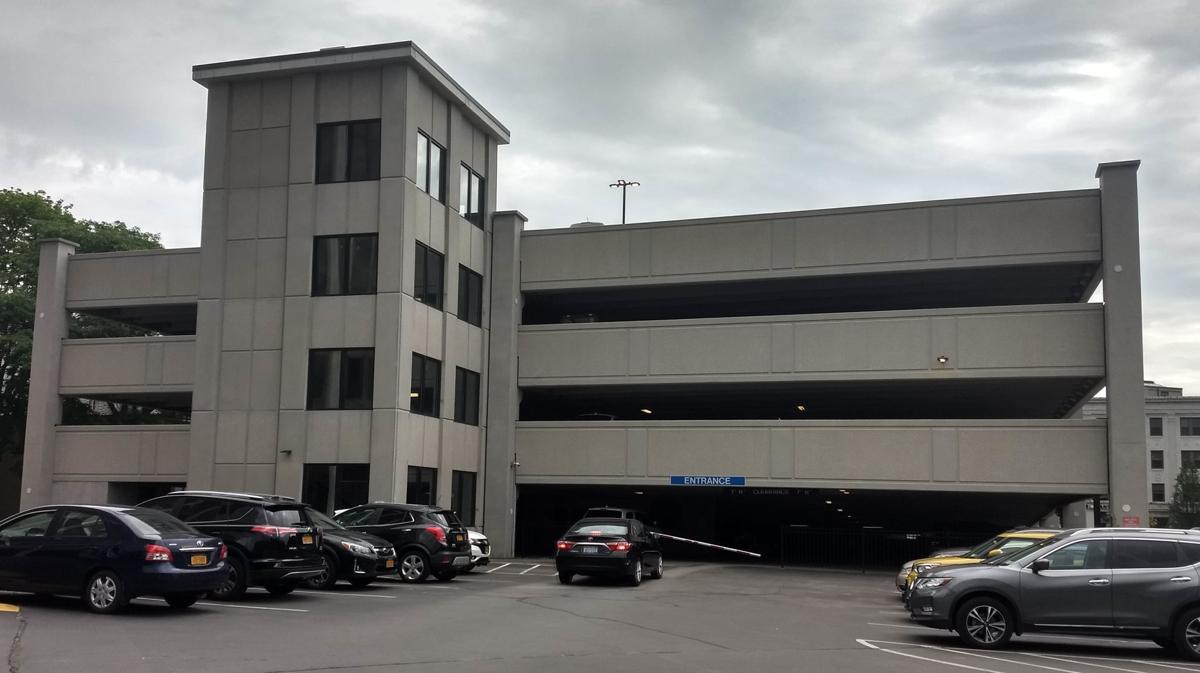 The parking garage next to the Travelers Building in downtown Glens Falls is seen last week. The land where the garage is located is in the ninth year of a 10-year payment in lieu of taxes agreement. A report filed by the Glens Falls Industrial Development Agency says the garage is responsible for employing 978 workers. 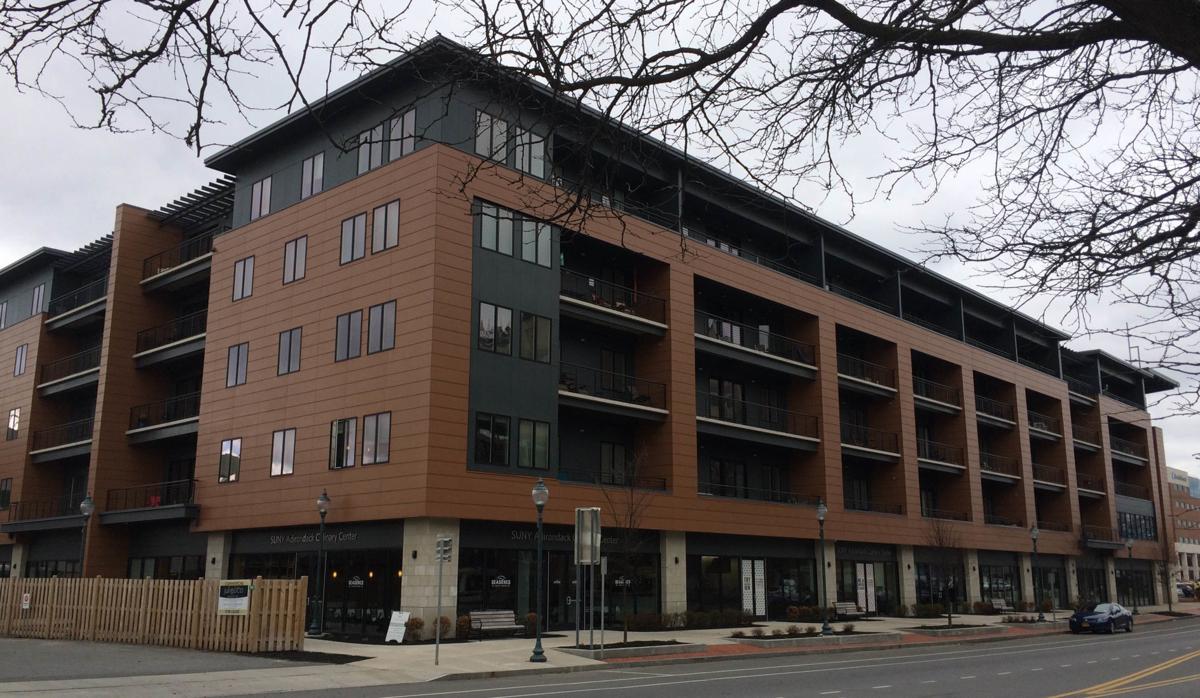 The building at 14 Hudson Ave., owned by Sonny Bonacio, is seen in this April photo. The two major commercial tenants are SUNY Adirondack Culinary Center and Surgical Specialists of Glens Falls Hospital and there are apartments on the upper floors. The project has received tax breaks from the Glens Falls Industrial Development Agency. The most recent report to the state says the building has created 72 jobs, but a SUNY Adirondack official says one job has been created while existing hospital employees were moved from other offices into its space.

The parking garage next to the Travelers Building is responsible for creating nearly 1,000 jobs, according to a report submitted to the state.

The garage was put up in 2009 to follow a condition of the lease that Travelers Insurance signed when it relocated from the former Northway Plaza in Queensbury to the Monument Square building in downtown Glens Falls.

The company had about 500 employees at the time and the 400-space garage increased the total number of parking spaces on the lot to 444, from the 278 that were in the surface parking lot.

Officials at the time said Travelers Insurance would not have moved to Glens Falls from Queensbury without the parking garage. The company’s lease had expired and the office had closed after workers became ill from noxious fumes.

The Glens Falls Industrial Development Agency in 2009 granted the property owner, 333 Glen Street Associates, a 10-year payment in lieu of taxes agreement, according to which taxes were paid just on the land and not the garage for the first five years. Beginning in the sixth year, the company paid taxes on 50% of the $3,265,600 assessed value of the garage.

IDAs are required to file reports to the state to track job creation. The Glens Falls IDA said in its report that the parking garage has 978 full-time equivalent employees.

But only 10 employees work for the management company that takes care of the property, according to a report filed with the IDA. It is unclear how many of those employees are assigned to the garage.

Even if the tax breaks were for the move to the Travelers Building and not construction of the garage, government watchdog Travis Whitehead thinks the jobs should not count.

“You’re not supposed to count it as a job if it goes from one town to another,” he said. “Certainly, Queensbury and Glens Falls are in the same economic region.”

Whitehead, a member of the Warren-Washington IDA, has been critical of payment in lieu of taxes agreements and questioned whether they produce the number of jobs that are promised.

The 978 jobs are among the 1,316 new jobs created as a result of 11 Glens Falls IDA projects, according to the Public Authorities Reporting Information System report that IDAs are required to file with the state.

Whitehead said he believes the actual number of jobs created by the Glens Falls IDA deals is closer to 100.

IDAs have the authority to “claw back” some of the benefits they grant if job creation numbers do not hit the target.

Another project that has created a large number of jobs, according to the report filed with the state, is the mixed use building at 14 Hudson Ave. constructed in 2017 by developer Sonny Bonacio. The report lists 72 full-time equivalent employees.

The building is home to the SUNY Adirondack Culinary Arts program, Surgical Specialists of Glens Falls Hospital and 87 apartments. It also has a parking garage.

The college relocated its culinary program to downtown Glens Falls from leased space at 410 Bay Road in Queensbury. Doug Gruse, director of marketing and communications for SUNY Adirondack, said the college added one adjunct baking instructor with the move downtown and is recruiting for one new full-time position of baking arts/culinary coordinator.

The hospital is leasing about 25,000 square feet of space in the building and brought together six surgical practices in orthopedics, urology, thoracic and general surgery at the new office. No new jobs were created.

Hospital officials said they pursued the project because they can get a higher reimbursement for every patient seen, because the building is located across the street from the hospital and considered part of the campus.

The Bonacio project received an extended 15-year tax break. The full value of the improvements is exempt from taxes for 7 1/2 years, then the developer will pay taxes on 50% of the building’s roughly $5 million assessed value for the remaining 7 1/2 years.

In response to questions about the job creation figures, EDC Warren County President Edward Bartholomew said the Glens Falls IDA in March adopted a policy that both direct and indirect jobs stemming from a project should be counted.

The new policy requires the development company and all tenants to provide annual employment information on the number and types of jobs. This will allow the IDA to have more accurate information about each project, Bartholomew said.

Bartholomew said in an email that the parking garage at the Travelers Building created 55 construction jobs and “allows for job creation and job retention through the businesses that utilize their services and maximize retained employees as a result of the parking garage allowing space to accommodate the employees and visitors.”

“Without the parking services the garage provides, the businesses within the Travelers Building would not be able to employ the number of employees they currently have on site,” he wrote.

“But for the construction of the parking garage being built, Travelers would not have located in downtown Glens Falls,” he added.

He said the city did not pirate jobs from Queensbury.

“Travelers moved of their own volition. It was not poached by the city, and they required that there be a parking garage and they inserted that,” Bartholomew said.

Hudson Headwaters Health Network is another major tenant in the building, and in the fall, about 120 AngioDynamics employees are moving into the ninth floor, Bartholomew said. That will bring the number of employees in the building to 950.

As for 14 Hudson Ave., Bartholomew said the building was constructed on a former vacant lot and Bonacio employs one or two people there directly. There were 90 construction jobs listed for 2017. The project had no tenants as of 2018, because it wasn’t completed yet.

The employees from the Glens Falls Hospital space will be included in next year’s report.

Bartholomew said the number of jobs from the building’s tenants should be counted.

“We are taking the position that those jobs should be reported, because they are jobs with the development. They’re not the direct jobs of Bonacio, but they’re jobs within that facility,” Bartholomew said. “Otherwise, why would a developer develop a building if he could not have any tenant?”

The IDA’s 11 active projects have paid $440,000 in taxes to the city, according to Bartholomew.

Bartholomew pointed out that 10 of the 11 IDA projects involve redevelopment of vacant or underutilized buildings or properties.

Other downtown redevelopment projects that received tax breaks include the Spot Coffee building at 221 Glen St. The property, formerly home to Godnick’s furniture store, also has 29 apartments. It has created 63 jobs, according to the report.

The redevelopment of the Rogers Building at the corner of Bay and Maple streets has created 54 jobs, according to the report. The building is home to a real estate firm, paint and sip business, hair salon and apartments.

The Warren Street Square project, which includes office space and 27 residential units, has created 64 jobs, according to the report. The Smith Flats building on the corner of Bay and Washington streets is home to Edward Jones and 13 apartments. It lists two jobs being created.

Hoffman will be leasing space to tenants in the old post office building on Warren Street.

The Queensbury Hotel has increased its employment from 30 full- and part-time workers, before it was bought by Ed Moore, to 77, according to the most recent report. The hotel received property, mortgage and sales tax breaks and has undertaken extensive renovations of the lobby, conference facility, restaurants and guest rooms.

The Warren-Washington IDA did not submit its state report, because there were inaccurate and incomplete entries in some of its books.

A state audit in February faulted the Warren-Washington IDA for not reviewing the cost-benefit analysis of proposed projects.

The agency has been in a transition, with the bookkeeper leaving and a new one coming on board.

Whitehead said the Warren-Washington IDA is putting together a spreadsheet to have all the information in one location so it’s easier to track what tax breaks were given and how many jobs were created.

The issue of how to count jobs is not unique to Glens Falls, but makes the economic picture look brighter than it is in reports submitted to the state, according to Whitehead. It also makes it appear the cost of the tax breaks per job is lower than it really is, he says.

“I’m sure they would like to be able to say that New York is generating all kind of jobs,” he said. “I’m sure it doesn’t get looked at very hard.”

Editorial: Tax breaks don't live up to their billing

The way industrial development agencies operate can make you question the meaning of common words like “create” and “benefit” and even “job.”

The following are the stories I considered the most newsworthy and interesting that I worked on this year:

The parking garage next to the Travelers Building in downtown Glens Falls is seen last week. The land where the garage is located is in the ninth year of a 10-year payment in lieu of taxes agreement. A report filed by the Glens Falls Industrial Development Agency says the garage is responsible for employing 978 workers.

The building at 14 Hudson Ave., owned by Sonny Bonacio, is seen in this April photo. The two major commercial tenants are SUNY Adirondack Culinary Center and Surgical Specialists of Glens Falls Hospital and there are apartments on the upper floors. The project has received tax breaks from the Glens Falls Industrial Development Agency. The most recent report to the state says the building has created 72 jobs, but a SUNY Adirondack official says one job has been created while existing hospital employees were moved from other offices into its space.