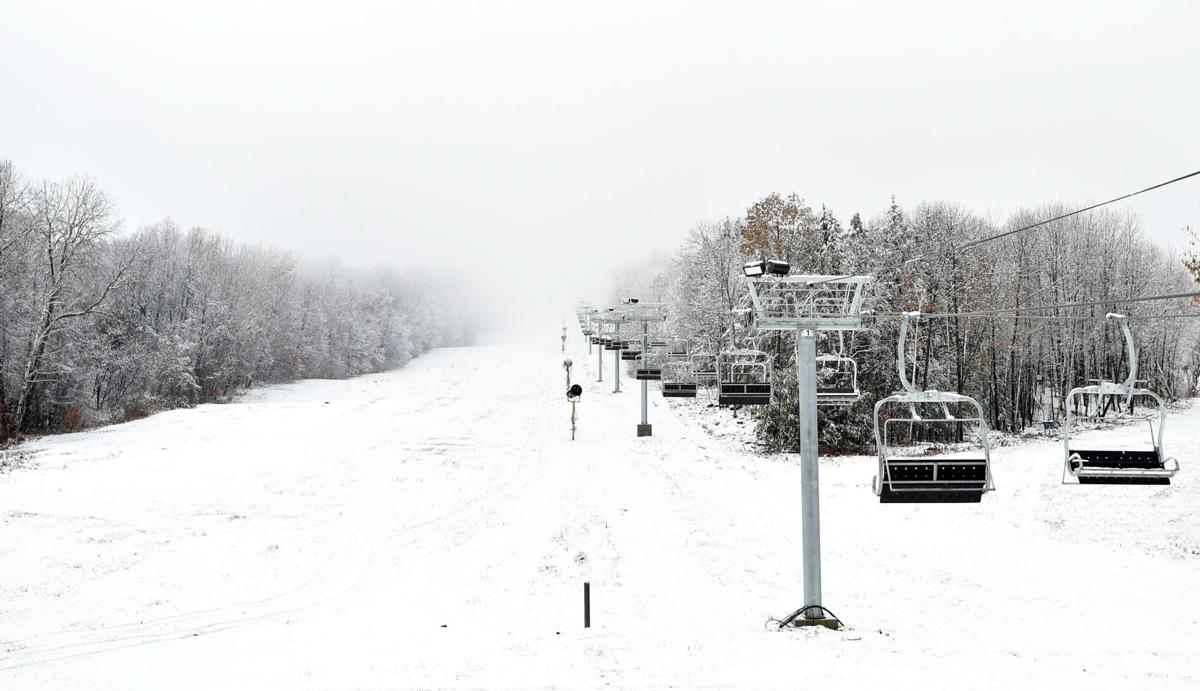 On a picture-perfect snowy day, West Mountain officials showed off their final improvements from a seven-year, $17 million project. The last items to be completed included this new chairlift for the Northwest face. 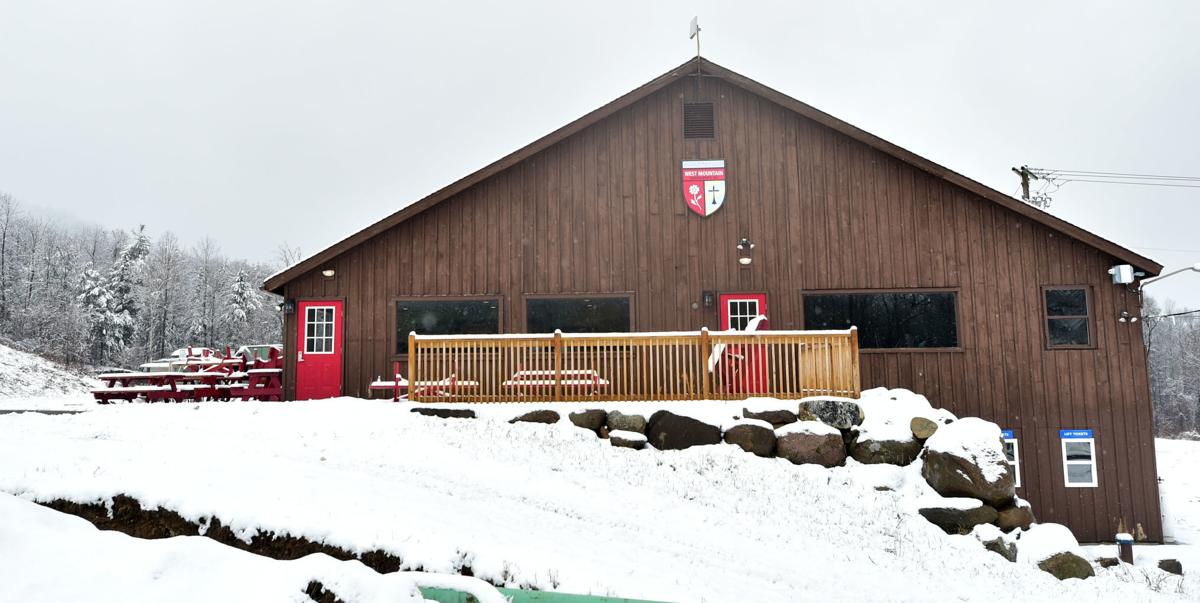 The Northwest lodge at West Mountain has been gutted and renovated. By opening day, a bar, bathrooms and a ticket booth will be open at the building. A kitchen is also in the works. 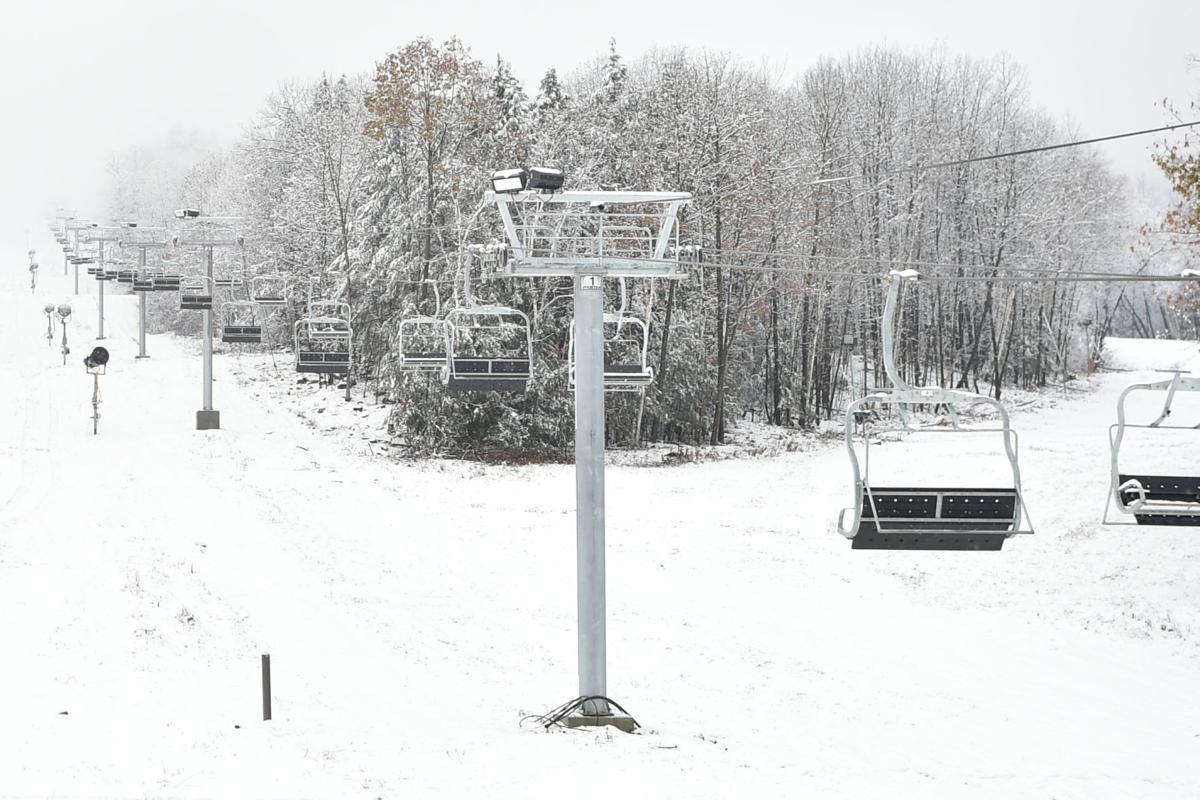 This new chairlift will take skiers up the Northwest face of West Mountain in only eight minutes, down from 12 to 14 minutes on the old chairlift.

QUEENSBURY — A new ski lift, lights, snowmaking machines and a café are awaiting skiers this winter at West Mountain.

In fact, snow came a little too early for the ski resort this year. Tractors and bulldozers are still at work on the Northwest side of the mountain, finishing up the new ski lift.

But despite an inch or more of snow and slush at the base, co-owner Spencer Montgomery said all will be done in time for opening day. They’re aiming for Dec. 7.

At the entrance of the ski mountain, visitors will see new healthy options in the new café. But for those who drive to the Northwest side, there is much more in store.

They will find a new ski lift (replacing the old triple chair,) trails fully covered by snow-making equipment, and a bar with bathrooms at the base.

There used to be an old locker-room style building there. It was gutted this summer to make room for a small secondary lodge. Work on a kitchen is still ongoing but may be finished this season.

Visitors can also buy tickets there.

“When it’s jammin’ there (at the main lodge), this’ll take the pressure off,” Montgomery said.

He expects to run a spring event there this season, and perhaps in the future use it to extend the ski season.

“It’s great for spring. You can open one lift and a small kitchen and stay open without the overhead,” he said.

The new lift on that side replaces the triple chairlift built in 1972 that took 12 to 14 minutes to get to the summit. The new lift takes eight minutes.

“It will actually be comfortable,” Montgomery added. “We’ve put full lighting and snow-making on that side of the mountain, which was rarely open.”

And the terrain is among the mountain’s best, he added.

This is the last part of a $17 million, seven-year project to fully modernize and improve West Mountain. All three chairlifts have been replaced. Permanent snowmaking guns have been added throughout the mountain, rather than using a few portable snow guns.

“You don’t have to drag them from trail to trail. That saves a lot of time and allows us to make a lot more snow,” Montgomery said.

All of the lighting on the mountain has been replaced with high-efficiency lights. That put an end to complaints about how the intensity of the light would change from area to area, making it hard for skiers’ eyes to adjust while heading downhill.

West Mountain is now extending into the spring, summer and fall as well, with a ropes course, mountain biking and special events that can be catered in-house at the new $1 million kitchen in the lodge. A wedding platform at the summit has proven popular.

The ropes course opened this summer — missing the crucial spring school season — and endured a slow start. But by the end of the summer, it was gaining in popularity, Montgomery said.

“We started getting decent business by the end of the summer,” he said. “We expect the volume to increase dramatically. We built it and now we just gotta get the word out.”

Still, with the seven-year project nearly complete, he’s not resting on his laurels. Now he’s thinking about adding lodging near the Northwest lodge, perhaps for ski racers. A hotel there is also on his radar.

It could open the ski mountain to students who live too far away for a day trip, he said. During his tenure, the ski school has gone from 681 students to 1,600 students a year.

“It’s really amazing the impact this has,” he said. “We are really a feeder mountain to the mountains of New York and Vermont. We are teaching thousands and thousands of people how to ski.”

West Mountain has two new camps among its summer offerings this year.

QUEENSBURY — Having built its aerial playground among the summit trees, West Mountain Ski Area is now seeking approval for a zip line that fli…

QUEENSBURY — Gabriel Goss, 14, was completely confident that the ropes would hold him if he fell on West Mountain’s new Aerial Adventure Park.

West Mountain's Aerial Adventure Park will open to public July 1. A group of middle school students were the first to try it out on Monday.

On a picture-perfect snowy day, West Mountain officials showed off their final improvements from a seven-year, $17 million project. The last items to be completed included this new chairlift for the Northwest face.

The Northwest lodge at West Mountain has been gutted and renovated. By opening day, a bar, bathrooms and a ticket booth will be open at the building. A kitchen is also in the works.

This new chairlift will take skiers up the Northwest face of West Mountain in only eight minutes, down from 12 to 14 minutes on the old chairlift.