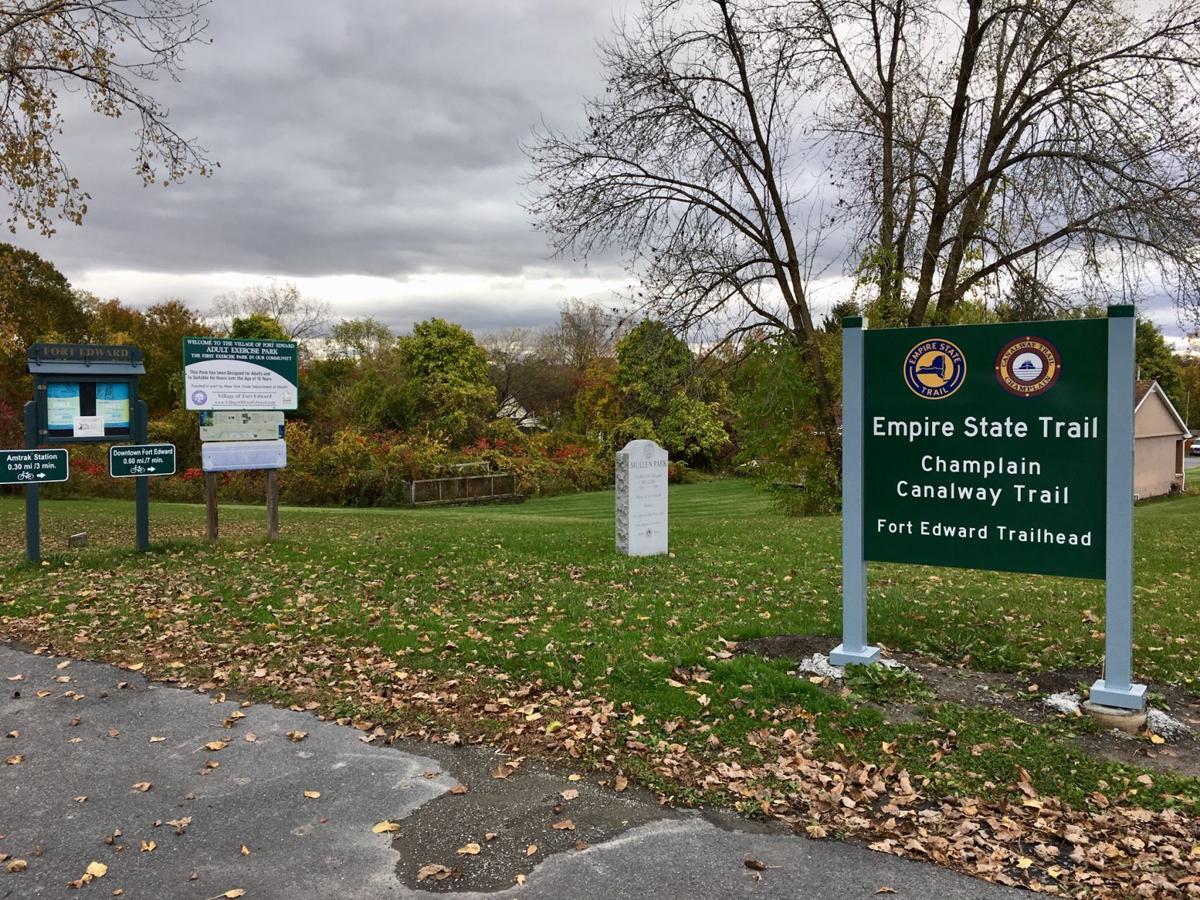 Signs advertising the Empire State Trail and the Champlain Canalway Trail are seen in 2019 in Fort Edward. New York State officials say they have finished work on a 750-mile trail for cyclists, hikers and runners that spans the state. 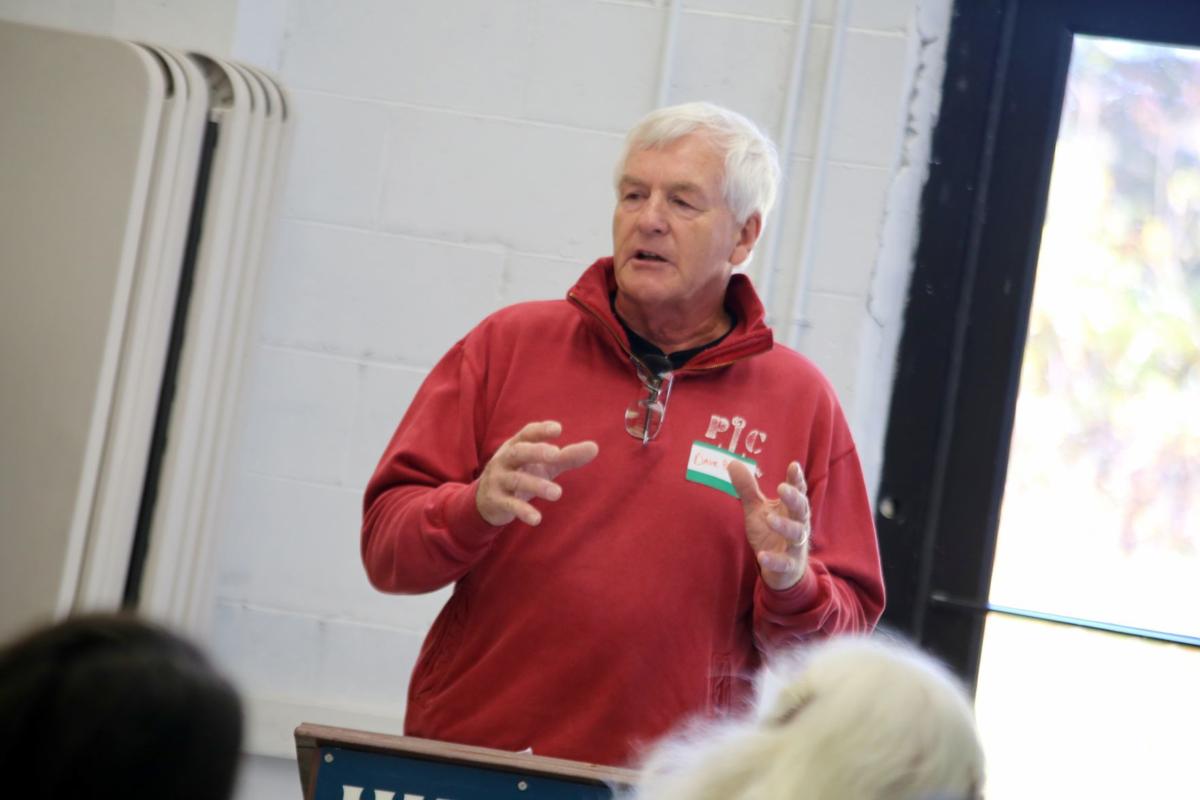 David Perkins, a representative for the town of Kingsbury, talks about the Champlain Canalway Trail at a meeting Thursday held at the Town of Greenwich Hudson Riverside Park. 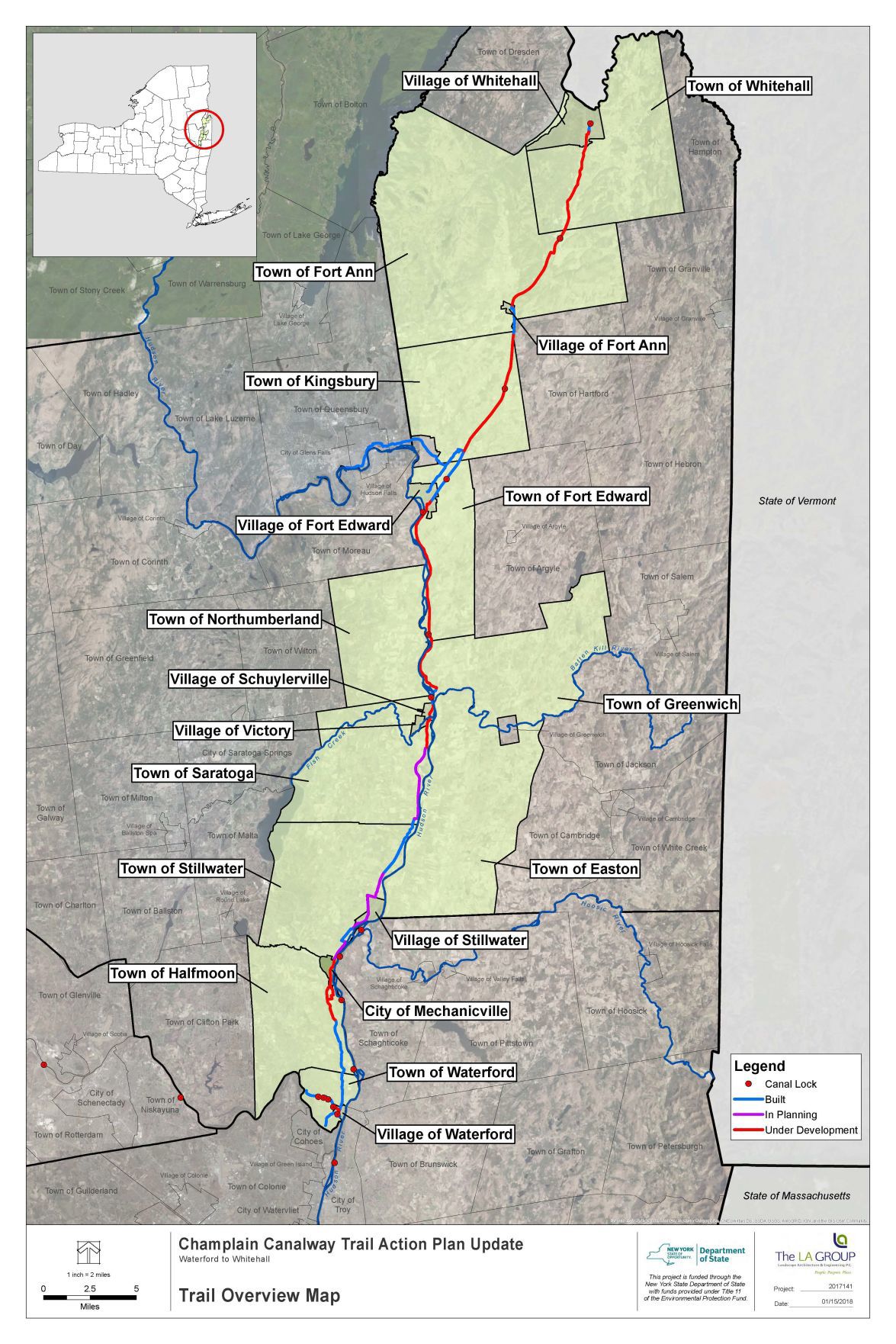 This map shows an action plan update for the Champlain Canalway trail, created by The LA Group. 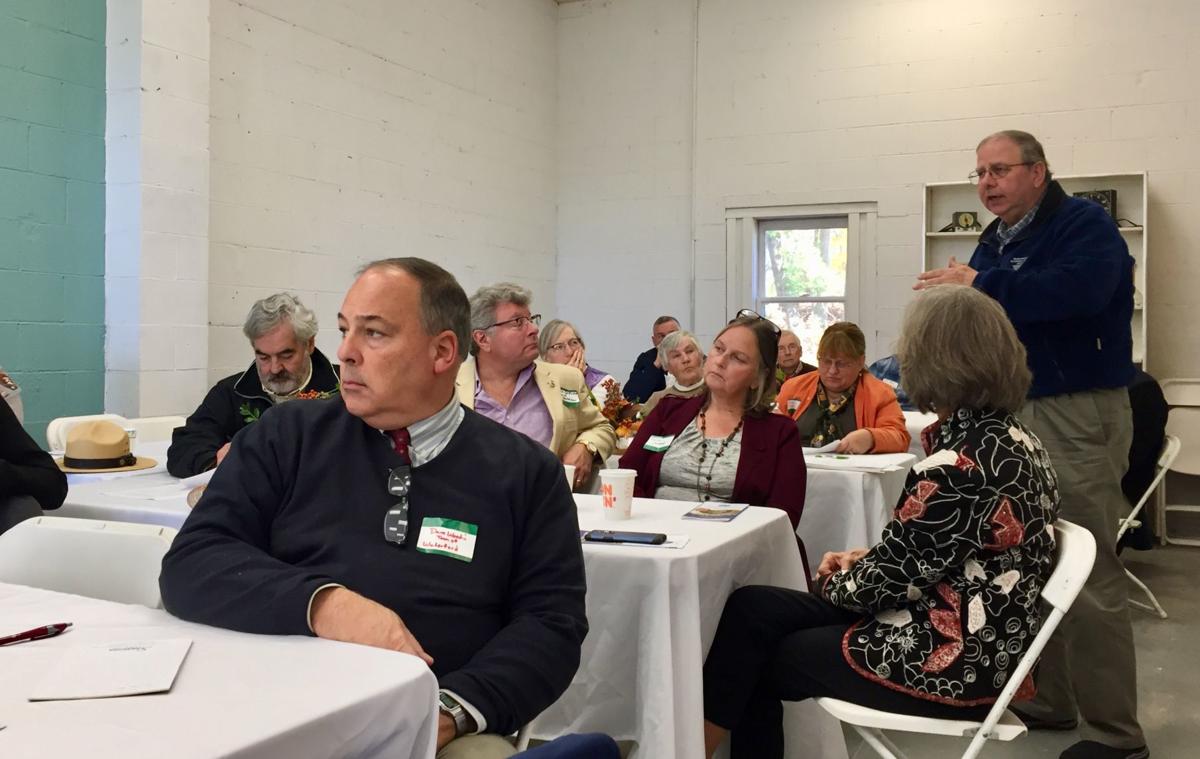 GREENWICH — With a 2020 deadline for the Empire State Trail approaching, work on the adjoining Champlain Canalway Trail is moving at an unprecedented pace.

Saratoga County, Washington County and state officials gathered Thursday to give each other an update on where their respective trail links stand, at a Champlain Canalway Trail meeting in Greenwich’s Hudson Riverside Park.

Though the state and local trails are separate entities, from Waterford to Whitehall they follow the same path. Gaps that seemed insurmountable to folks working on the Champlain Canalway Trail have now been closed with the flow of state dollars to complete the state’s 750-mile bike trail from New York City to Canada, and Albany to Buffalo.

The progress encourages people like Dave Perkins and Jeanne Williams. Both have been working on the Champlain Canalway Trail for years, Perkins representing the town of Kingsbury, and Williams the Feeder Canal Alliance.

“I’m just astonished at what has happened over the last 14 years,” Williams said. “It’s just amazing.”

Dave Woodin, planning director for Waterford, said the last link of the town’s portion of the Champlain Canalway Trail is nearly done.

The trail not only leads north along the Champlain Canalway Trail and Empire State Trail, but connects to trails leading into Cohoes and the Green Island area.

Moving north into Halfmoon, Town Board Member Eric Catricala said two projects are happening at once, including the addition of a water line, which has helped with road grading and other trail work needs; and of a 2,500-foot boardwalk.

Catricala said the hope is Halfmoon’s projects will wrap up this time next year.

In Mechanicville, Supervisor Tom Richardson said signs have been added to the waterfront and a new bathhouse has been a helpful amenity for visitors.

Halfmoon and Mechanicville are also benefiting from the completion of the Zim Smith Trail, a 9.5-mile multi-use trail connecting Ballston Spa to Halfmoon.

By next summer, city officials hope to have bike racks on their docks and a rental bike business so visiting boaters can use the trails.

No one from Stillwater was present at the meeting, but Saratoga Supervisor Tom Wood said Stillwater had finished its trail connection to Saratoga. Saratoga is finishing its trailhead at the southern end.

Schuylerville Mayor Dan Carpenter said the village is working closely with local businesses to make the area more bike-friendly. By the spring, he hopes an Empire State trailhead will be done and will include a bike repair station and information kiosk.

Northumberland leaders were not present.

A little more than a decade ago, Williams and Perkins thought Washington County leaders would never get on board the Champlain Canalway Trail train.

Greenwich Supervisor Sara Idleman said money from the Empire State Trail repaired a bridge off of River Road. Snowmobiles are able to use it, too.

While there were no representatives from Fort Edward present, Perkins said the village needs more trail signs.

The bike path is currently closed on a portion between Fort Edward and Kingsbury, as crews work on constructing the trail, which will include two pedestrian bridges and a pedestrian tunnel under Route 196.

The bridges will go over Bond Creek and the Feeder Canal.

Sasha Eisenstein, with the New York State Canal Corp., said the bridge and tunnel are slightly behind schedule.

“We hope to begin work by the end of this year, so we’re ready to reopen by July 2020,” she said of the Fort Edward and Kingsbury stretch.

A stretch of the trail into Fort Ann is off-road, leading into the village. Sam Hall, Fort Ann Town Board member, said many businesses are within walking distance of the village’s Waterfront Park where the Empire State trailhead will be.

There are still some concerns with the steepness of Clay Hill Road, and another stretch in Fort Ann may need to be bolstered with soil to keep the trail from flooding at certain times of the year.

Several miles of the trail are dropped on Route 4, leading to Whitehall — “I have yet to meet anybody that says that’s a great idea,” Perkins said.

The speed and traffic on the road may not be ideal for bikers, but Laura Oswald, director of economic development for Washington County, said the county and state are working on ways to take the trail off-road.

Part of the areas the trail could be diverted to have significant swaths of wetlands. Oswald said the county will be meeting with the state Department of Environmental Conservation and the U.S. Army Corps. of Engineers to see what might be done.

Whitehall Mayor Phil Smith said a trailhead for the Empire State Trail was installed at the town’s waterfront park. There is an information kiosk and bike repair station.

The village has started a comprehensive plan, which includes bike trails, and Smith said he hopes more bike-friendly improvements can be made around Whitehall.

Dylan Carey, of Parks and Trails New York, talked about things municipalities can do to attract more biking visitors.

The organization has a “Bike Friendly NY” program for local businesses, which has so far focused on the Eerie Canalway Trail.

Carey said local shops, restaurants and other attractions can do things like add bike racks, repair stations, outside menus and WiFi to their offerings to attract more people.

Once businesses complete the items on the program’s list, they can get signs and stickers from the state, advertising themselves as bike-friendly businesses. The state will also feature them on brochures, online interactive maps and social media. The program is free.

Carey also recommended municipalities make sure they have signs downtown showing where things are and installing bike racks.

To learn more about the Champlain Canalway Trail, go to champlaincanalwaytrail.org.

To learn more about the Empire State Trail, go to ny.gov/programs/empire-state-trail.

To learn more about the "Bike Friendly NY" program, go to ptny.org/cycle-the-erie-canal/bikefriendly.

Mother throws four children out window during fire in Turkey

Mother throws four children out window during fire in Turkey

FORT EDWARD — Washington County officials are hoping to get the Champlain Canalway Trail off of Route 4, but the process is taking longer than…

The bridge over County Route 113 spanning the Batten Kill and linking Easton and Greenwich, finally opened to traffic on Friday.

Signs advertising the Empire State Trail and the Champlain Canalway Trail are seen in 2019 in Fort Edward. New York State officials say they have finished work on a 750-mile trail for cyclists, hikers and runners that spans the state.

David Perkins, a representative for the town of Kingsbury, talks about the Champlain Canalway Trail at a meeting Thursday held at the Town of Greenwich Hudson Riverside Park.

This map shows an action plan update for the Champlain Canalway trail, created by The LA Group.