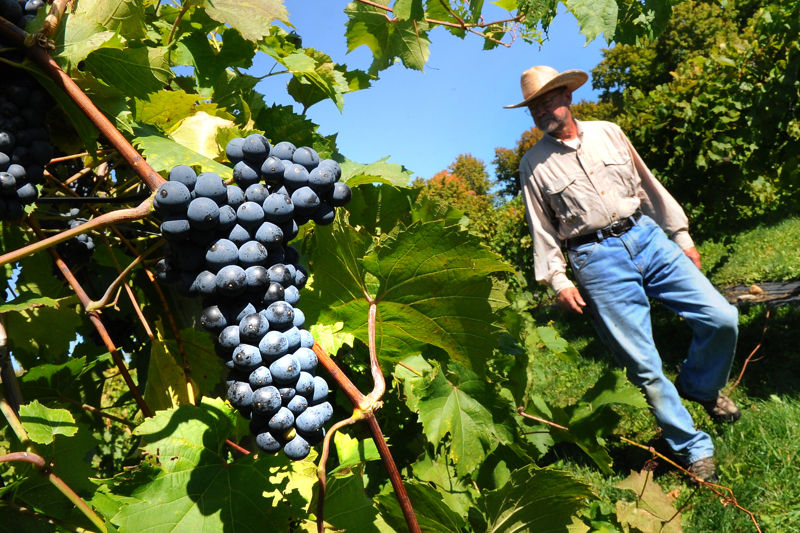 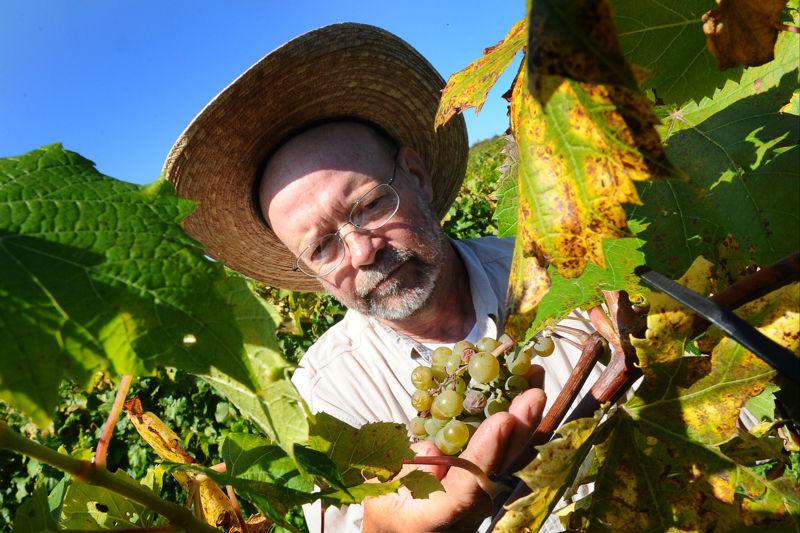 Gerry Barnhart, co-owner, checks the coloring of the La Crescent grapes at the Victory View Vineyard in Schaghticoke on Wednesday. (Steve Jacobs - sjacobs@poststar.com) 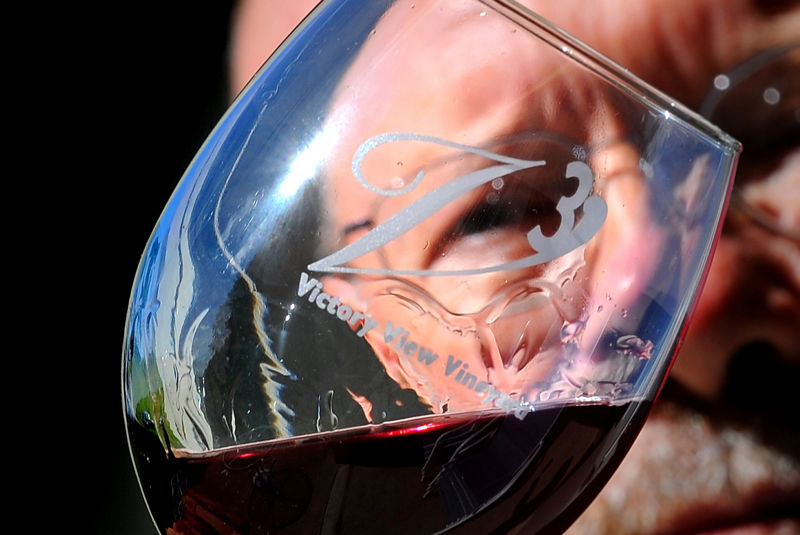 Gerry Barnhart, co-owner, looks Wednesday at a new 2014 "Revolution" red wine he produces and will sell at the Victory View Vineyard in Schaghticoke. (Steve Jacobs - sjacobs@poststar.com)

Local wineries, all relative newcomers to the region’s agriculture scene, are seeing good grapes as the year’s harvest gets underway.

The picking season is off to a later start than last year, though.

“The cool weather has kind of slowed the ripening,” said Gerry Barnhart, co-owner of Victory View Vineyard on Route 40 in Schaghticoke. “But we’ve had good weather since August.”

Victory View is one of the region’s only “estate wineries,” meaning it grows all the grapes needed to make the wine it sells. Many others in the area are buying grapes from other wineries and making them into wine locally.

Barnhart said his winery is bottling wine — a total of eight different styles — now, and he expects to produce around 700 cases from last year’s harvest.

This year’s harvest is likely to turn out about the same, he said.

His winery grows Marquette grapes on about an acre of the winery’s 41 acres. The winery contracts for grapes — grown and harvested to Ledge Rock’s specifications — from other wineries, mainly in the Finger Lakes region of New York.

“We crush our grapes on-site,” Akrop said. “We control the whole process, and we deal with a few select vineyards.”

While Akrop has been a winemaker for more than 20 years, Ledge Rock Hill was founded just three years ago.

The proliferation of winemaking in the region has been made possible by new grapes known as “Minnesota varieties,” so called because they were cultured by the University of Minnesota to be hardy enough to withstand colder climates.

Marquette is one of the better-known of the Minnesota varieties. Others include Frontenac, Frontenac gris and La Crescent. Cold-weather grape varieties have also been developed by other researchers, including those at Cornell University.

The new grapes aren’t trouble-free, however. Ken Denberg, owner of Natural Selection winery on Darwin Road in Cambridge, said his Marquette grapes have been hindered by “black rot.”

“I did not do well, and I regret planting so much of (the Marquette grapes),” Denberg said. “I had an injury in late spring, and I didn’t have the ability to get into the vineyard and really do my spray program like I wanted to.”

Barnhart agreed the Marquette grapes can suffer when they don’t get specific spring treatments.

For Denberg, though, the problems with Marquette spread to other varieties that are typically less labor-intensive, he said. He also thinks some of his vines were damaged by cold weather over the winter.

“(The harvest) is going to be much more modest than last year,” he said. “I had 20 degrees below zero temperatures here, and that slows them down ... retards them. It’s one of the things you contend with.

Jim Tresize, president of the New York Wine & Grape Foundation, said frigid winter temperatures likely damaged other North Country vineyards this year. Some of that damage was even seen in the Finger Lakes region, which is known for lake-induced microclimates that are very good for grape growing.

“In the Finger Lakes, it totally depends on the exact location of the vineyard,” Tresize said. “There are some vineyards that really got hurt badly, and then others that are only 20 miles away that are totally normal and will have a normal or large crop.”

Trezise said it’s likely the Finger Lakes crop will be down about 15 percent from a typical year, though some European grape varieties — merlot and reisling, specifically — could see losses of 30 to 40 percent this year.

The growing effort has also been a challenge for Oliva Vineyards on Route 4 in Fort Edward. Owner Tony Oliva said he’s expecting to start harvesting his best crop ever this weekend, though if he had to do it over again, he’d have chosen a different place for his vines.

“The clay’s very difficult to deal with; it’s always either very wet or very dry,” he said.

Washington County is known for a range of soil types, and clay-like ground has long been both bane and boon to farmers, depending on the crop and the year’s rainfall.

Oliva said he expects to make more than 1,100 cases of wine this year from last year’s grapes — both grown at the vineyard and purchased from other growers. That’s up from just over 290 cases in 2012, the vineyard’s first year of production.

The region’s vineyards — six in Washington County, 11 in Saratoga County and two in Warren County, according to the New York Wine & Grape Foundation — have banded together to market their products.

The Upper Hudson Valley Wine Trail, which bills itself as the state’s “newest wine region,” includes 13 wineries. Most are also part of the

Adirondack Craft Beverage Trail, which was established this year by Adirondack Regional Chamber of Commerce.

“We kind of like that (beverage trail),” Oliva said. “If you go to the wine trail, great. But they’re really far apart. What’s nice about the beverage trail is, whether it’s a distillery or a brewery, patrons can hit four or five places quickly.”

The trails will get an addition next year, when Fossil Stone Vineyards starts selling wine at its facility on Grange Road in Greenfield Center.

Co-owner Michael Spiak said harvesting was to begin this weekend on some of the more than 2,200 vines planted on about 5.5 acres of the vineyard, which he expects one day to include another 17 acres of vines.

It’s Fossil Stone’s first commercial crop, and the grapes picked now will be sold as wine next year.

Like other area wineries, Spiak plans to harvest by hand, even as the vineyard expands. He said the different varieties he’s planning to cultivate should ripen at different times, allowing him to tackle them one at a time.

“We’ll be harvesting a series of smaller vineyards, really,” he said.

Barnhart, with Victory View, said his “picking parties” are attended mainly by friends and family, and include food and socialization.

Oliva, with Oliva Vineyards, said it’s a similar process at his winery, and he was looking forward to the weekend’s harvest.

Gerry Barnhart, co-owner, checks the coloring of the La Crescent grapes at the Victory View Vineyard in Schaghticoke on Wednesday. (Steve Jacobs - sjacobs@poststar.com)

Gerry Barnhart, co-owner, looks Wednesday at a new 2014 "Revolution" red wine he produces and will sell at the Victory View Vineyard in Schaghticoke. (Steve Jacobs - sjacobs@poststar.com)