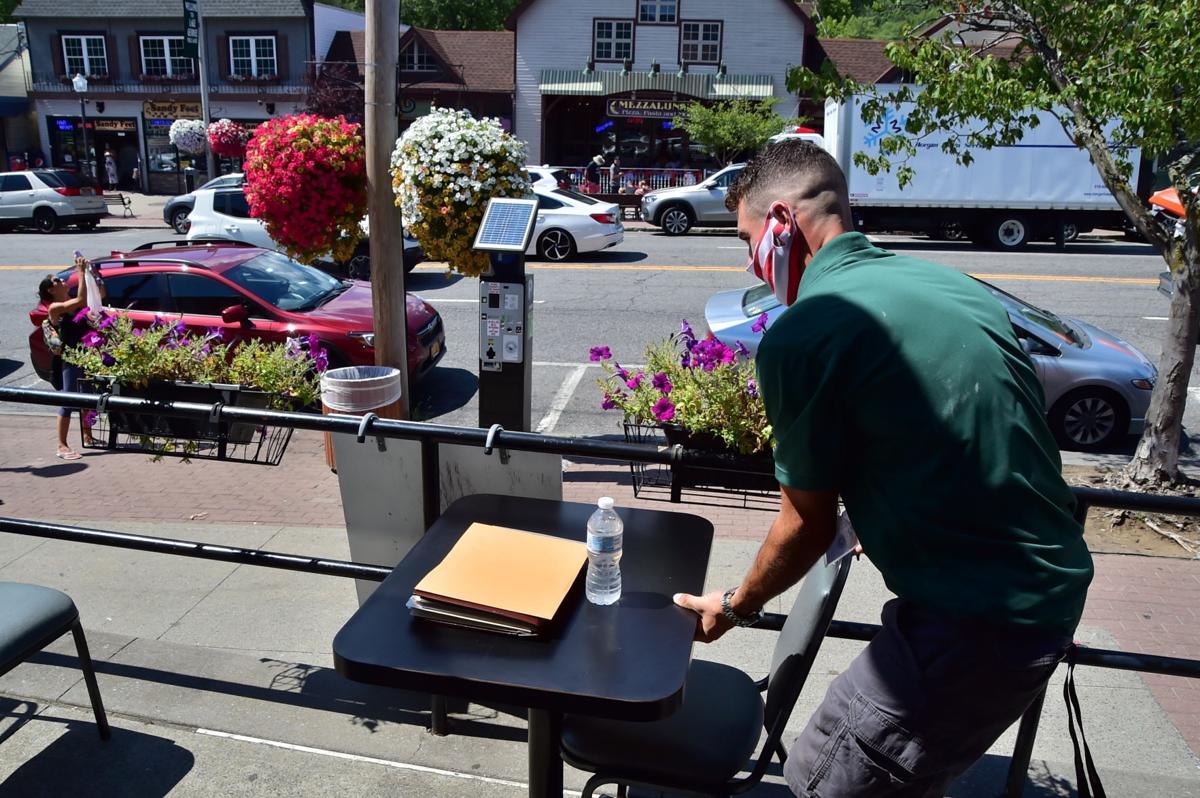 Troy LaBelle, the village of Lake George's COVID-19 inspector, helps rearrange a table that wasn't properly spaced in front of Kabab Express on Canada Street. LaBelle has performed more than 500 inspections since being hired on July 6. 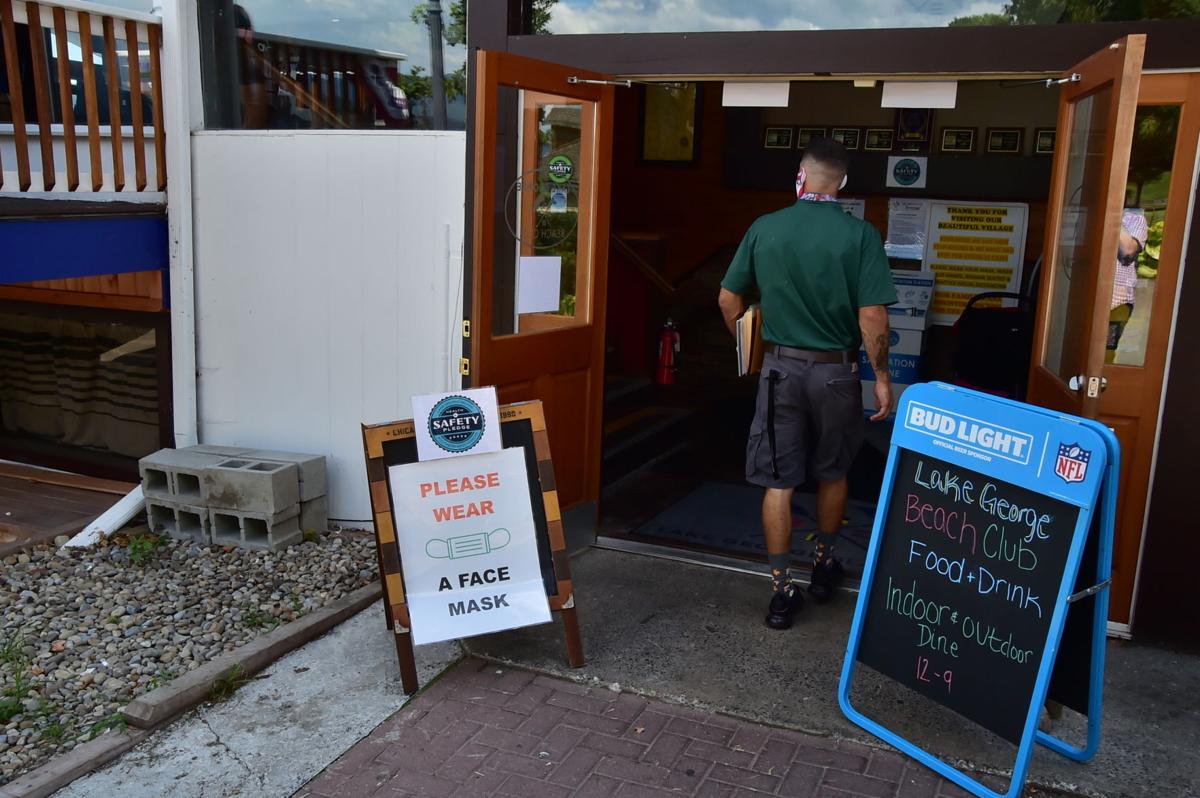 Troy LaBelle, the village of Lake George's COVID-19 inspector, enters the Lake George Beach Club to perform a random inspection. Since being hired on July 6, LaBelle has performed over 500 inspections. 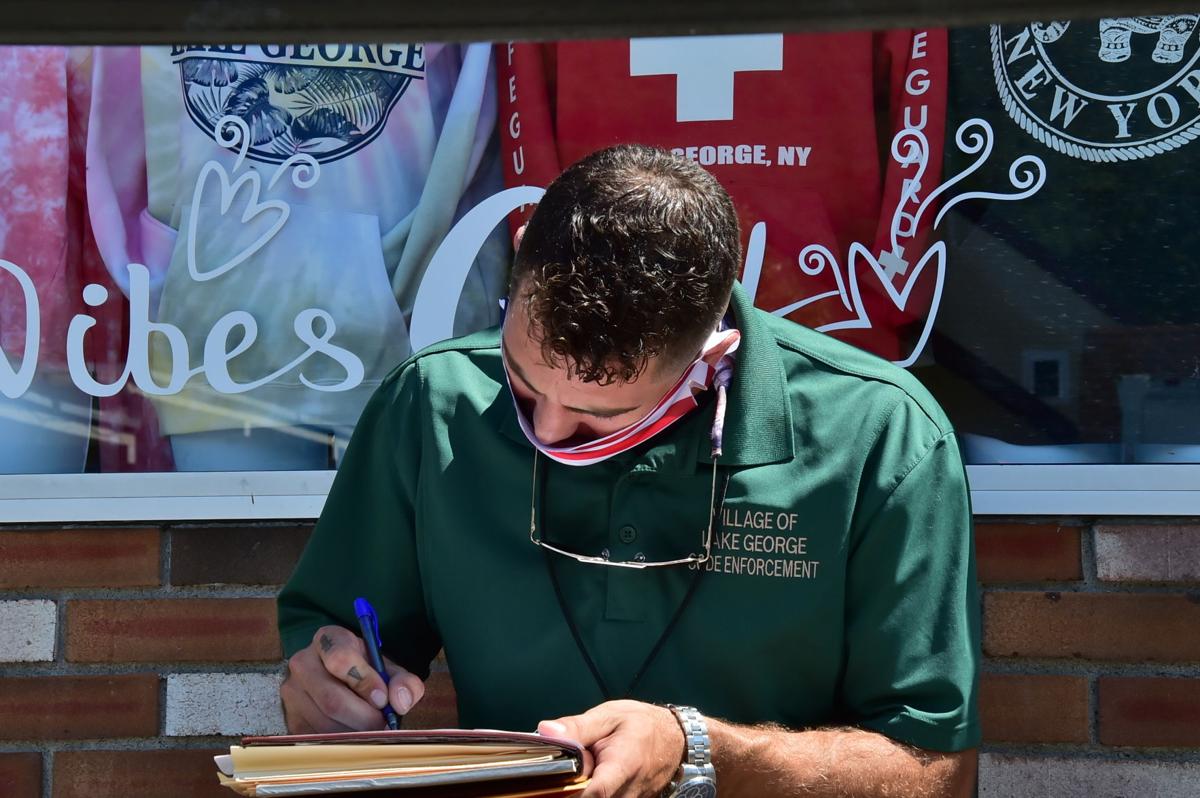 After noticing an employee helping a group of customers while not wearing a mask inside Lake George Vibes, Troy LaBelle, the village's COVID-19 inspector, documented the violation of state guidelines. A follow-up inspection will be performed to ensure all employees are following state guidelines. 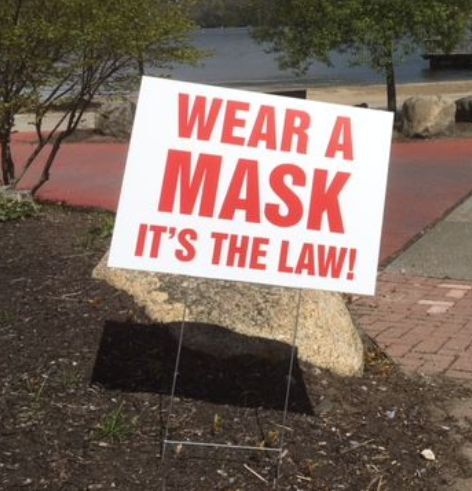 A sign in Shepard Park in Lake George urges visitors to wear a face mask.

LAKE GEORGE — There are a few hidden parking spots on Park Place where Troy LaBelle likes to leave his red pickup truck when his usual spot reserved along Canada Street is occupied.

The meters are hidden behind overgrown shrubs, making them difficult to spot even when up close. Anyone unfamiliar with the village could easily miss them, but LaBelle knows the ins-and-outs of Lake George as well as anyone.

As the village’s COVID-19 inspector, he’s spent nearly two months walking the streets of the popular summer destination, weaving in and out of the 193 businesses along Canada Street and beyond.

“In a typical day, I can do anywhere between 10 and 20 inspections, depending on how long I’m in the village,” LaBelle said through an American flag-themed face mask recently.

A Post-Star reporter spent an afternoon following LaBelle, where he performed a half-dozen inspections and documented multiple violations before ending his day early. Warren County had just released guidance on the protocols for fitness centers to reopen, and there was a meeting he needed to attend.

“I’m curious as to what the protocols are,” he said. “We don’t have any stand-alone fitness centers in the village, but a couple of hotels have gyms.”

It’s a part-time job, but one that LaBelle takes seriously. Since being hired on July 6, he’s performed over 500 random inspections throughout the village and has issued numerous verbal and written warnings.

Business owners were apprehensive of his presence at first. His green polo emblazoned with the words “Village of Lake George Code Enforcement” didn’t help matters.

“I feel like some people feared that I was coming in as law enforcement — coming to crack down and pull business licenses like the state’s Liquor Authority,” LaBelle said as he scanned the crowded sidewalks en route to his hidden parking spot.

But LaBelle said his focus is more on education. He’d rather take the time to help rearrange a few tables or clear up any confusion with the state’s guidelines than write a citation.

His approach has won over most business owners throughout Lake George, including Marie Bell, who operates the Lookout Cafe on Beach Road.

The restaurant is a popular destination, making it susceptible to overcrowding and other potential violations. Bell often leans on LaBelle for guidance on how to deal with it all, she said.

“Whether it’s good, bad or indifferent, it’s always nice to see him because he always has insight,” Bell said.

LaBelle typically begins inspections sometime in the afternoon. A list of businesses he plans to visit is kept in a leather-bound notebook along with copies of the state guidelines for each industry should any questions arise.

Standing on the corner of McGillis Avenue and Canada Street, LaBelle lays out his day: he plans to distribute a green certificate with the village’s seal on it acknowledging the merchant is COVID-compliant to a few shops along Beach Road before making his way up toward Canada Street.

That’s when he notices Funa’rama Fun Park, a children’s theme park that doubles as an arcade. A month earlier, he issued the business a citation after noticing the facility was operating without clearance from the state — an egregious violation.

“That was unfortunate,” he said of the situation.

Warren County later pulled the business’s operating license. It’s still the only business the LaBelle has been forced to issue a citation to, though he’s handed out his fair share of warnings.

“It was just something that we had to handle,” LaBelle said. “We haven’t had any repeat problems.”

Walking along Beach Road, LaBelle weaves in-and-out of businesses, passing out certificates and taking the time to listen to business owners and store managers, some who asked not to be named.

After talking with the owner of Lucci’s, he notices the store has no directional hours on the floor, leading to clustering. It seems like a minor infraction, but it’s one that needs to be documented.

“I just want to hang back and see how things flow,” LaBelle said, before filling out a form noting the violation.

Prior to becoming the village’s COVID inspector, LaBelle was finishing up classes to become a state-licensed home inspector when he caught wind of an open code enforcement position in Lake George.

He submitted a resume and received an interview with Mayor Robert Blais and village trustees a short time later.

The idea was broached about possibly inspecting businesses for COVID violations, and though he was trained in construction, LaBelle said he was eager to accept the position.

“I’ve been trained in methodical, detailed inspection, and although my inspection background is in construction, I was more than willing to accept the challenge,” he said.

LaBelle explained that he knows the difficulties business owners have been facing this summer because of the pandemic, and he takes that understanding with him when carrying out his work.

Proprietors are not only concerned about following the guidelines, but the village has been consistently busy. Major nearby attractions, like Great Escape, have never opened, LaBelle pointed out.

“I try to gear my approach in a way that is assertive, but I try to be helpful and let them know I’m not there to bash them, but just looking for a solution to a problem at hand before it grows into something else,” he said.

Over the course of more than 500 inspections, LaBelle has developed a working relationship with shop owners and managers.

Conversations often start on a personal level before shifting to COVID-related matters.

After rattling off some of the vehicle’s specs, he opens up about issues he’s experienced with customers not wanting to wear masks.

“My only problem is with people sometimes walking in not caring about the masks,” Mouneeb said.

The village has directed business owners to enforce the mask mandate however they see fit, including calling law enforcement.

“Masks Required” signs are taped to the door and posted around the store to make the policy clear. There’s nothing more LaBelle can do than listen. His focus is only on ensuring businesses are complying with state mandates.

But if he sees an issue that can be resolved, he’ll try to do so.

“If I see it on site, and I have a manager or a supervisor right there, I will work with them while I’m on site to provide a solution,” LaBelle said.

Walking along Canada Street, he spotted a few tables in front of Kabab Express that were too close together. State guidelines require spacing of at least 6 feet of distance between parties, and the current setup provided only 3 feet.

“That table has got to be moved,” LaBelle said before entering the store.

He asks an employee behind the counter if there are any problems or if he has any concerns before mentioning the tables.

For business owners like Jose Filomeno, who owns the Lake George Beach Club, LaBelle’s presence is a sight for sore eyes.

LaBelle visits the restaurant frequently due to the size of the establishment.

Filomeno said he knows business owners elsewhere in the state who have been struggling to keep up with state guidelines and struggle to find answers. He welcomes LaBelle because he knows he’ll provide answers and address any concerns.

At the Village Mall, LaBelle makes a stop at Airbrush Tattoo & Body Art, a small booth that overlooks the lake.

He hands Victoria Baker, an employee working the booth, a green certificate signifying the business is COVID-compliant.

“Thank you for everything that you do,” LaBelle said.

Back along Canada Street, LaBelle notices Lake George Vibes had no signage notifying customers that masks are required.

Rather than crack down, LaBelle explains he printed a few signs he planned to distribute to the shop’s owner. The signs, he said, can often be torn down by passing customers or destroyed by inclement weather.

“Just more friendly remediation to offer a quick fix rather than be that iron hammer,” he said.

He opens the door to the T-shirt shop and notices the cashier helping a group of customers, her mask below her chin.

LaBelle waves and then exits.

“She knows me; she knows she’s gotta have a mask on,” he said, as he began filling out a form documenting the violation.

A follow-up inspection will be conducted to make sure all employees are doing what they’re supposed to be doing.

After filling out the form, LaBelle re-enters the store. He explains the issue about the signage and reiterates the state’s mask mandate.

“I just wanted to make sure you know, just to be mindful of the mask wearing,” LaBelle said.

The woman, whose mask was still below her nose, promptly pulled it up.

It was a friendly, albeit stern encounter.

“I think that the business owners are trying to do the best they can to be compliant and they’re very understanding of the mandates being enforced,” he said.

“It’s all about moving forward and maintaining a positive rapport and being respectful,” he added.

With temperatures beginning to drop, the Lake George area is looking to extend its busy summer tourism season into the fall.

Here's how bad nuclear war would be for our planet

Here's how bad nuclear war would be for our planet

Troy LaBelle, the village of Lake George's COVID-19 inspector, helps rearrange a table that wasn't properly spaced in front of Kabab Express on Canada Street. LaBelle has performed more than 500 inspections since being hired on July 6.

Troy LaBelle, the village of Lake George's COVID-19 inspector, enters the Lake George Beach Club to perform a random inspection. Since being hired on July 6, LaBelle has performed over 500 inspections.

After noticing an employee helping a group of customers while not wearing a mask inside Lake George Vibes, Troy LaBelle, the village's COVID-19 inspector, documented the violation of state guidelines. A follow-up inspection will be performed to ensure all employees are following state guidelines.

A sign in Shepard Park in Lake George urges visitors to wear a face mask.