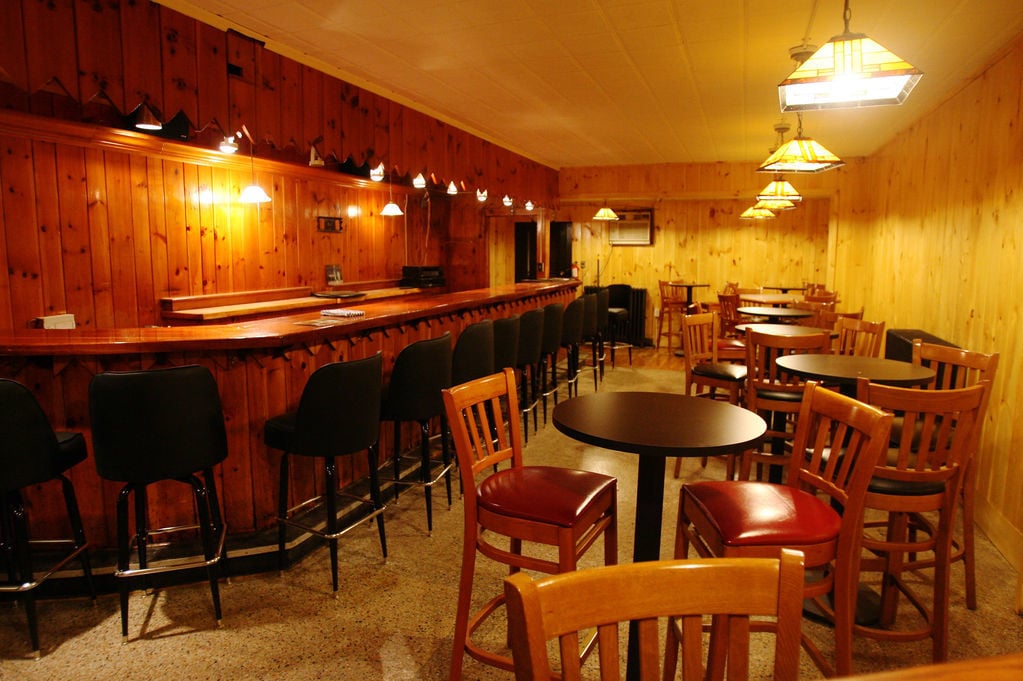 The bar and lounge at Lucia's on Route 4 in Whitehall, as seen in February 2012. The building has been vacant since 2016 and was auctioned off this week to owners who plan to reopen it as an eatery. 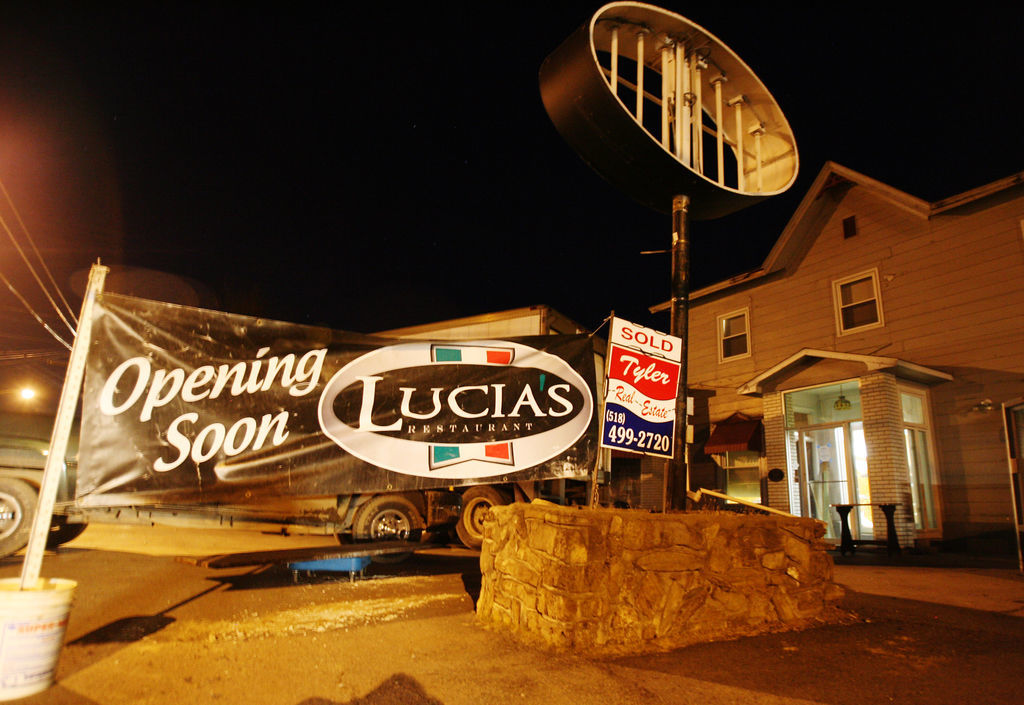 Lucia's on Route 4 in Whitehall, as seen on Feb. 20, 2012. The building has been vacant since 2016 and was auctioned off this week to owners who plan to reopen it as an eatery. 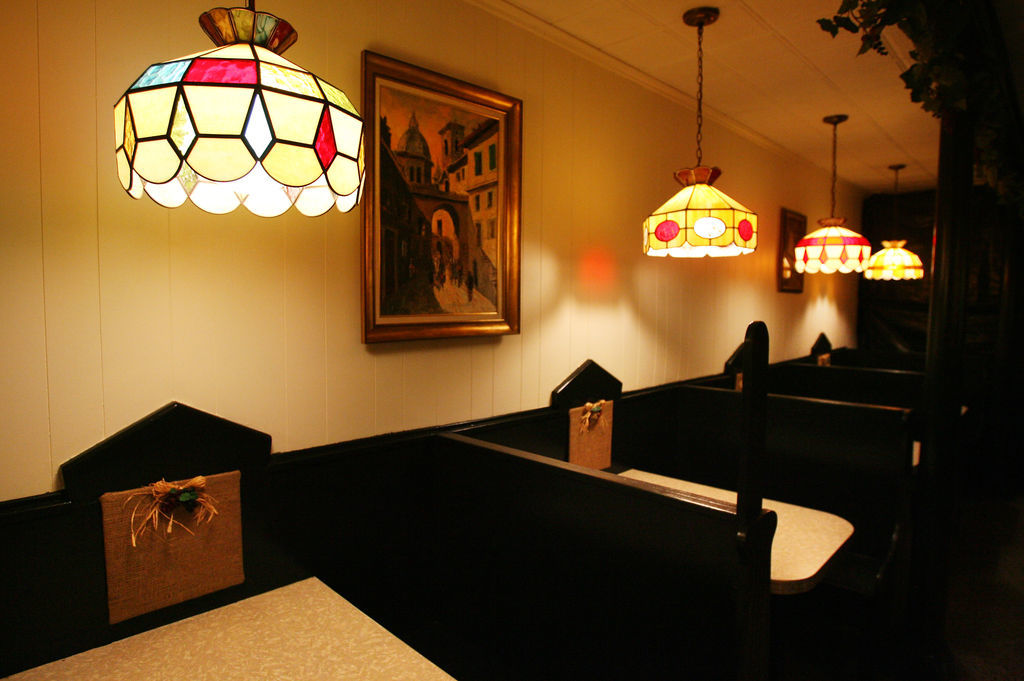 Tables await customers at Lucia's on Route 4 in Whitehall in the winter of 2012. The building has been vacant since 2016 and was auctioned off this week to owners who plan to reopen it as an eatery.

WHITEHALL — An iconic Whitehall restaurant vacant since the early months of 2016 was auctioned off Tuesday to a group of new owners planning to reopen it as an eatery.

The sale represents a loss to the corporation, as it had loaned $150,000 to former owners Shelly and David Carpenter.

The establishment at 209 Broadway has never been more successful than it was as the Roma. It was the local hangout after recitals, sports games and school functions, said multiple community members, but that disappeared in 2002 when former owners John Grady and Marilyn Grady-Browning sold the business.

Between 2002 and 2011, Pat Roche and his wife, Vicki, owned and operated the restaurant as the Roma.

In 2011, Roxanne and David Waters opened it again, as Lucia’s. It closed in March 2015. That same year in May, the Carpenters made their attempt in the building with the Cook Street Station.

Less than a year later, the couple abruptly shut down the restaurant and defaulted on their loan with the local development corporation. The building has been vacant since 2016, and Derway said the corporation is using the $71,000 in purchase money to pay the taxes and water bill on the property for the new owners.

Ross, who is the owner of Hometown Chevrolet in the village, and his wife, Laurie, have partnered with a group of couples with local ties to Whitehall, including Michael and Kathy Putorti, Francis and Cheryl Putorti, Tom and Patty Abbott and Dan and Debbie O’Rourke.

“We were extremely thrilled that it wound up with these guys,” Derway said. “Unfortunately, even though we did take a loss on this, the ultimate goal was to get it back into the hands of someone in the community.”

Cheryl Putorti, who runs Putorti Broadway Market with husband Francis, said they were thinking of retiring until this opportunity came along. While the group had been looking at purchasing the old restaurant for a while, she said the price was a bit steep at first. When the local development corporation advertised the starting bid at $50,000, the group decided to give it a shot.

Derway said multiple people were at the auction to bid on the restaurant, but the Whitehall group was successful.

Cheryl said a lot of work needs to be done on the building, and that’s what the group is tackling before deciding on a name and restaurant theme. The roof is leaking into the dining area, for example. The kitchen needs to be redone, and some of the flooring has rotted away, Cheryl added.

“If people don’t know this town, people would think it’s nothing,” Ross said of the building. “I know how important that particular building is to people. It means a lot to people. That’s why I wanted to be part of it.”

With several new businesses popping up along Route 4, Cheryl said it will be important to show that growth can happen with their new enterprise. And while there’s a breakfast and lunch place in the village called Historic Grounds, Cheryl said there’s not a dinnertime restaurant.

Ross said while he and his partners hope to open a new eatery by spring of next year, they’re going to take their time and make sure the renovations are right.

Besides the practicality of opening the new place, Cheryl said ultimately it’s a labor of love. The group will be combing through old Roma menus to bring back a few staple dishes, but it is also excited to start fresh and bring new life into the walls of a building that evokes such nostalgia for Whitehall residents.

“We all love Whitehall,” Cheryl said. “We all have our hometown connection, and we’re excited about our new adventure.”

Greenwich man gets jail, probation for sexual abuse of child

A local man will serve 16 weekends in jail and 10 years on probation for fondling a child.

Three men face charges for allegedly beating a man in his own Queensbury home.

A Glens Falls man faces a felony for alleged threats to a business that wouldn't hire him.

Woman charged with DWI after being in court drunk with child

A Hudson Falls woman faces a felony after she was found to be drunk at a court appearance to which she drove her child.

The mild stretch of winter that has lingered for weeks will end over the next day or so, with snow expected late Wednesday before a bigger storm moves in for the weekend.

Queensbury drug suspect released without bail despite having no U.S. citizenship

A man who police believe sold heroin in Queensbury was released from jail on his own recognizance, despite the fact he is not a U.S. citizen.

A Granville father and daughter were hit with a $4.8 million civil court verdict this week for a 2015 fatal car crash.

A traffic stop in Moreau on Saturday led to the arrest of a man for having an illegal knife.

The bar and lounge at Lucia's on Route 4 in Whitehall, as seen in February 2012. The building has been vacant since 2016 and was auctioned off this week to owners who plan to reopen it as an eatery.

Lucia's on Route 4 in Whitehall, as seen on Feb. 20, 2012. The building has been vacant since 2016 and was auctioned off this week to owners who plan to reopen it as an eatery.

Tables await customers at Lucia's on Route 4 in Whitehall in the winter of 2012. The building has been vacant since 2016 and was auctioned off this week to owners who plan to reopen it as an eatery.