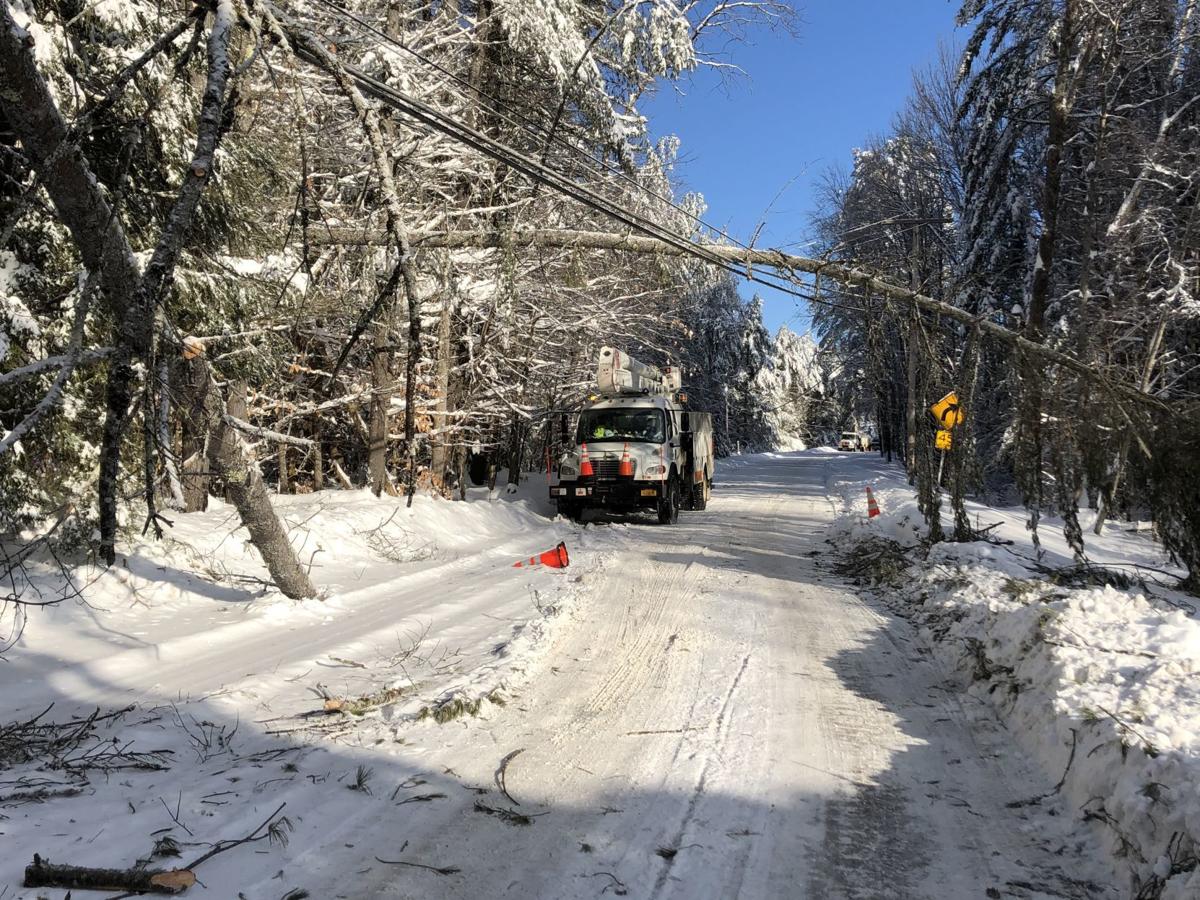 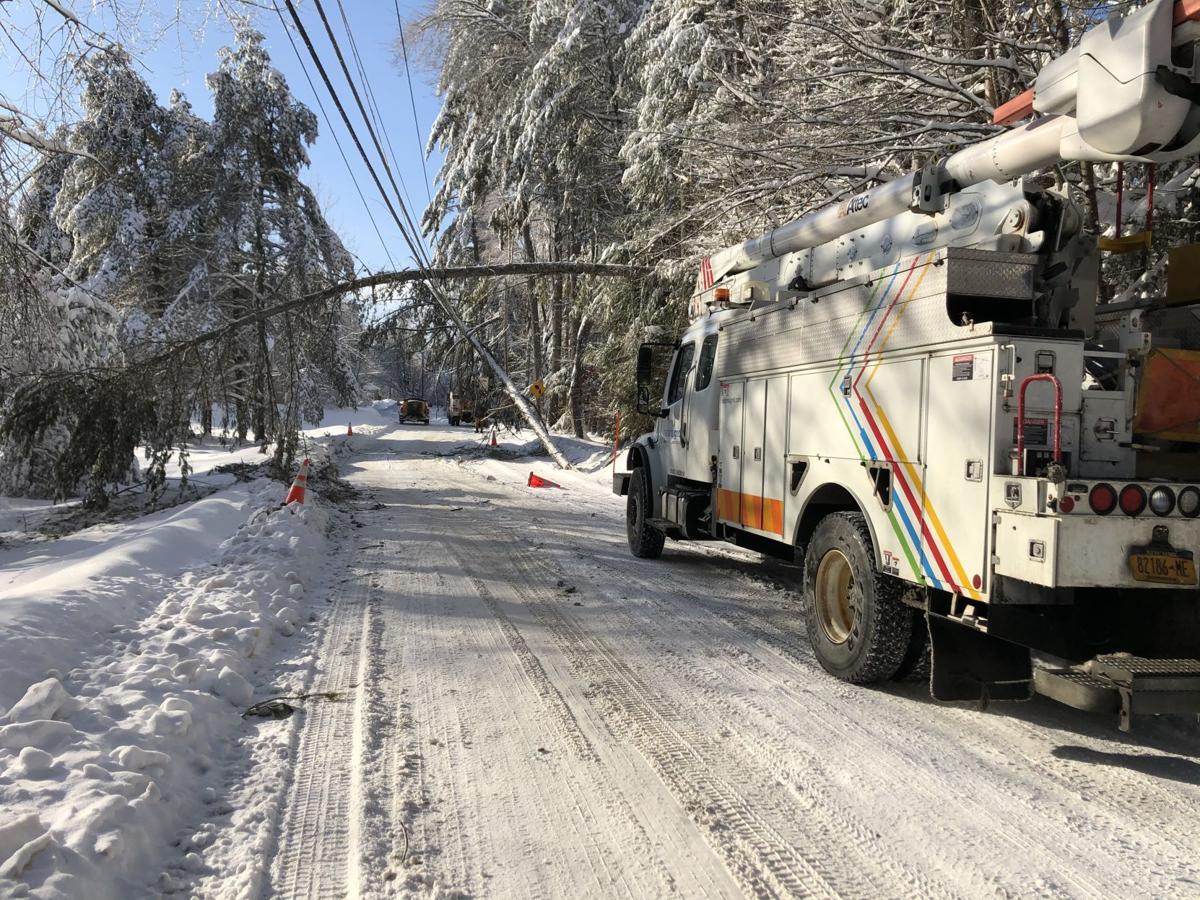 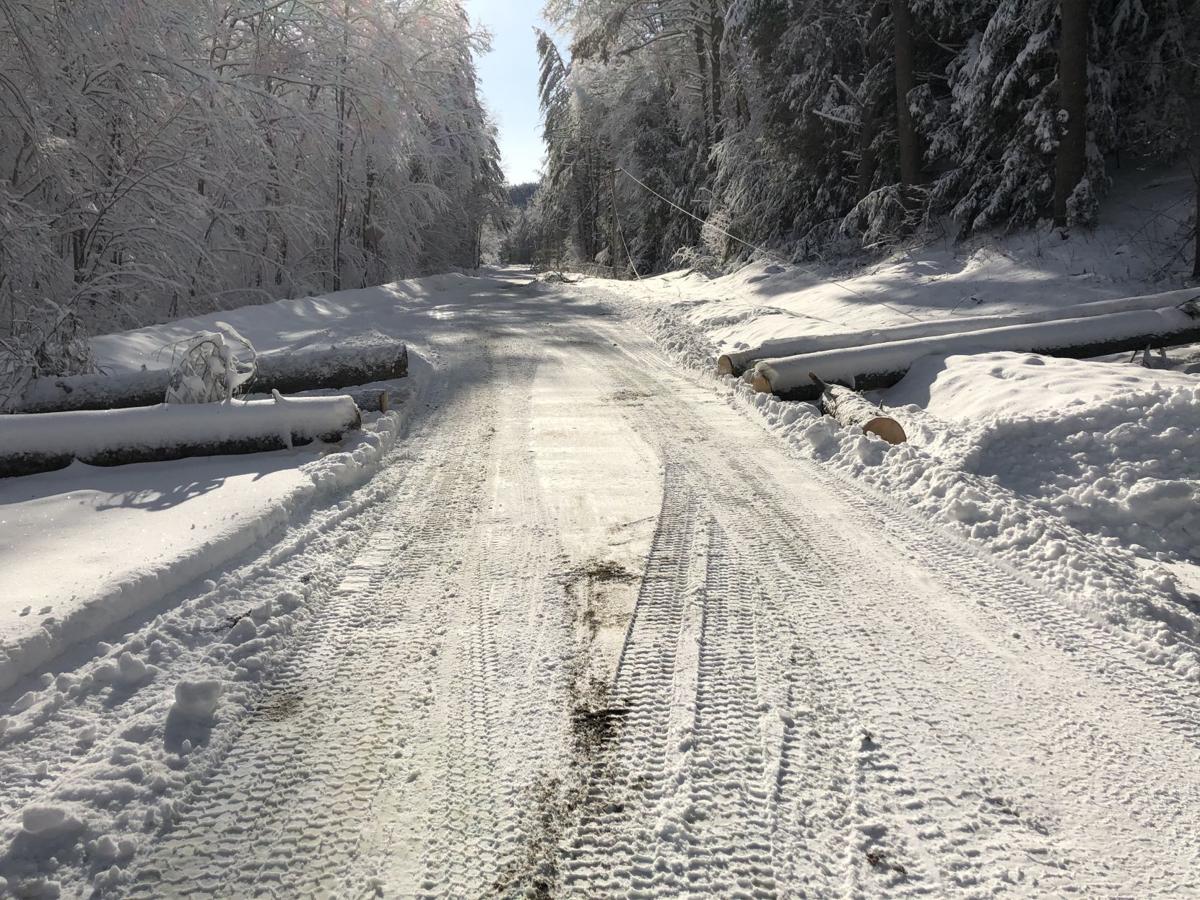 Golf Course Road in Warrensburg was closed as of Saturday morning because of trees and wires down for more than a mile. 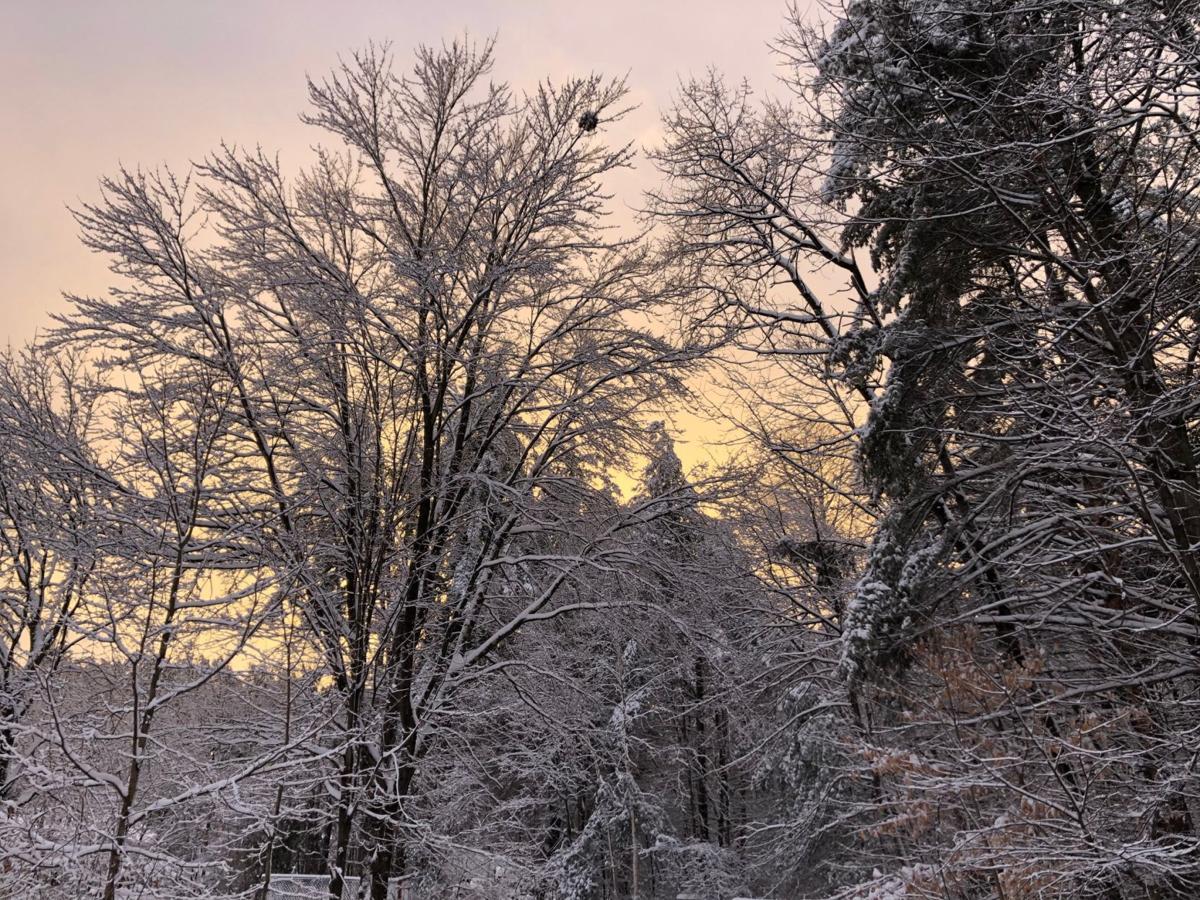 The sunset after Friday's storm brought a bright orange glow to much of the region. 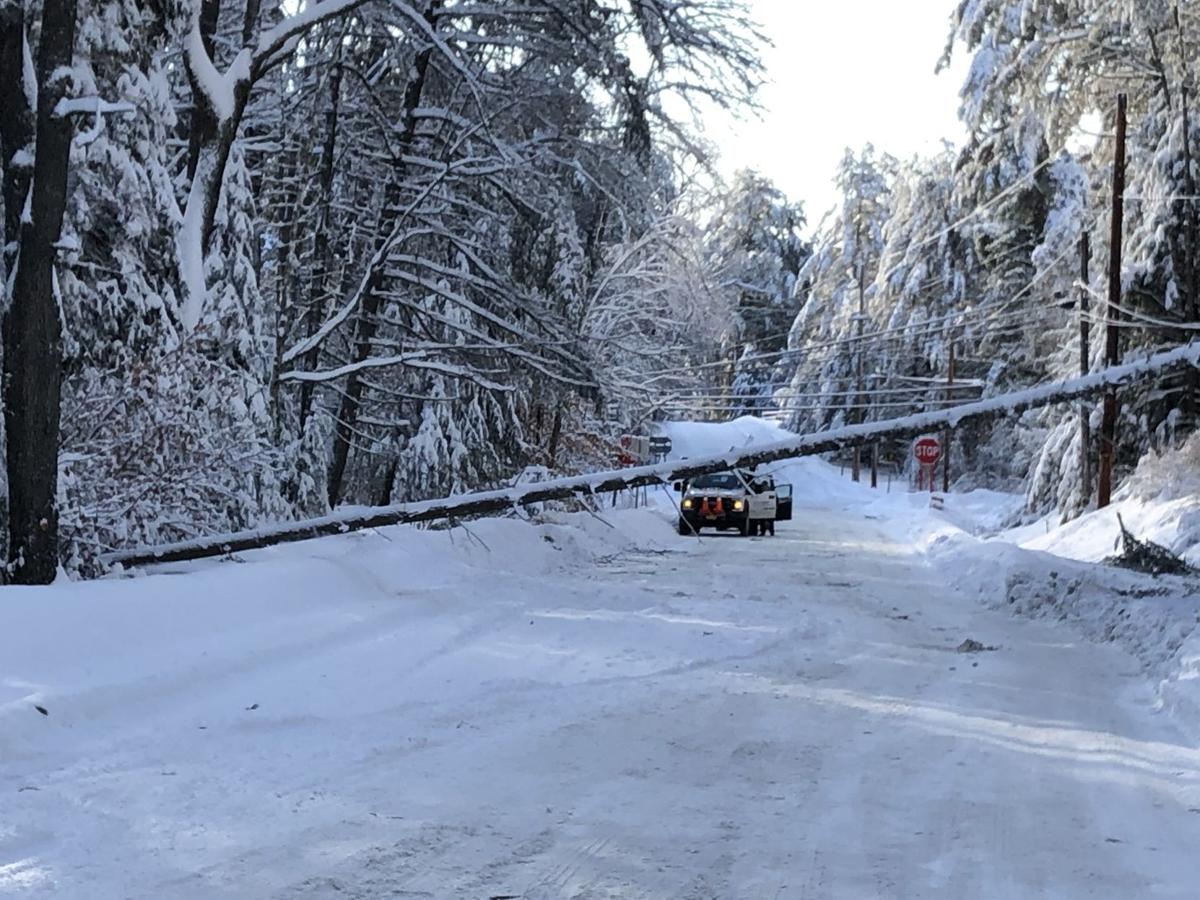 A tree sits on utility wires on White Schoolhouse Road in Chester on Saturday morning, with a National Grid worker minding it in a vehicle. 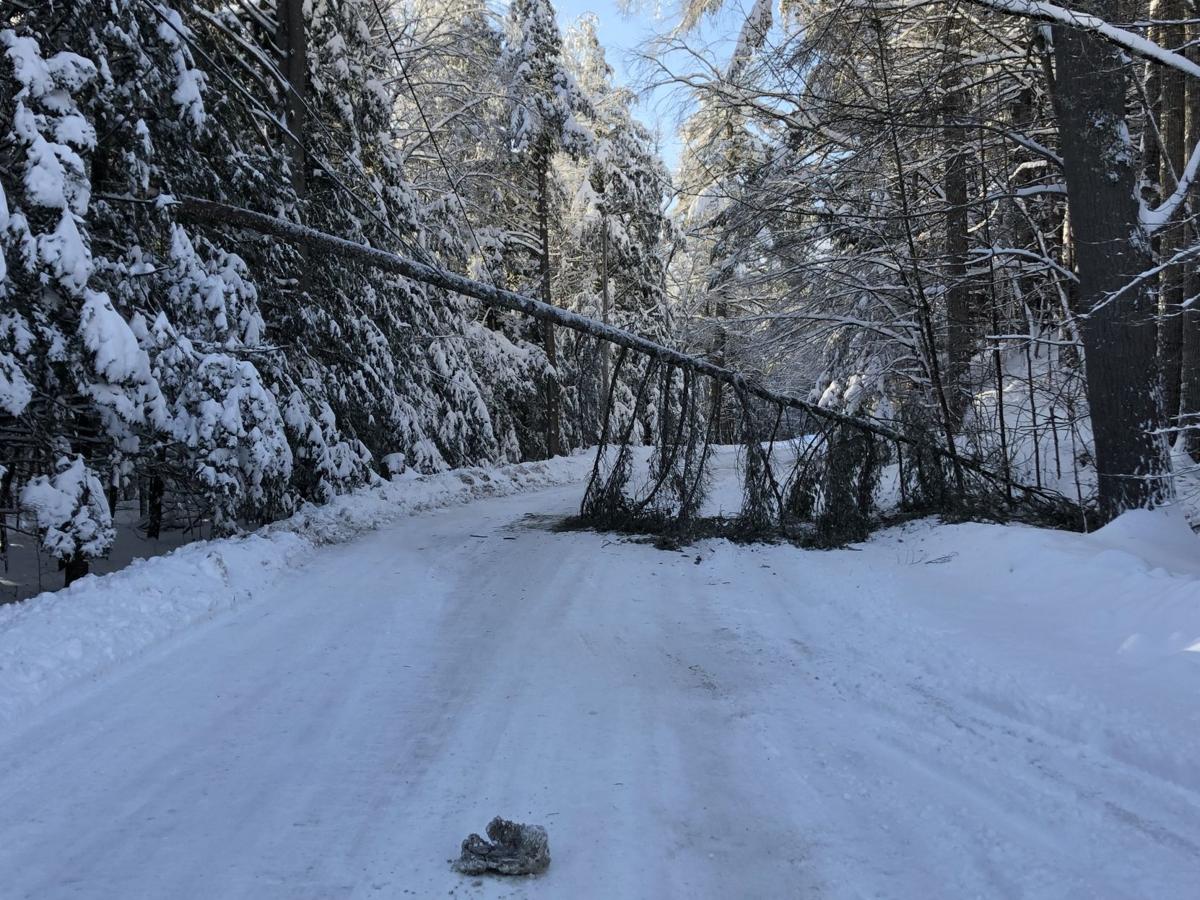 A tree lays across county Route 8 in Chester on Saturday. 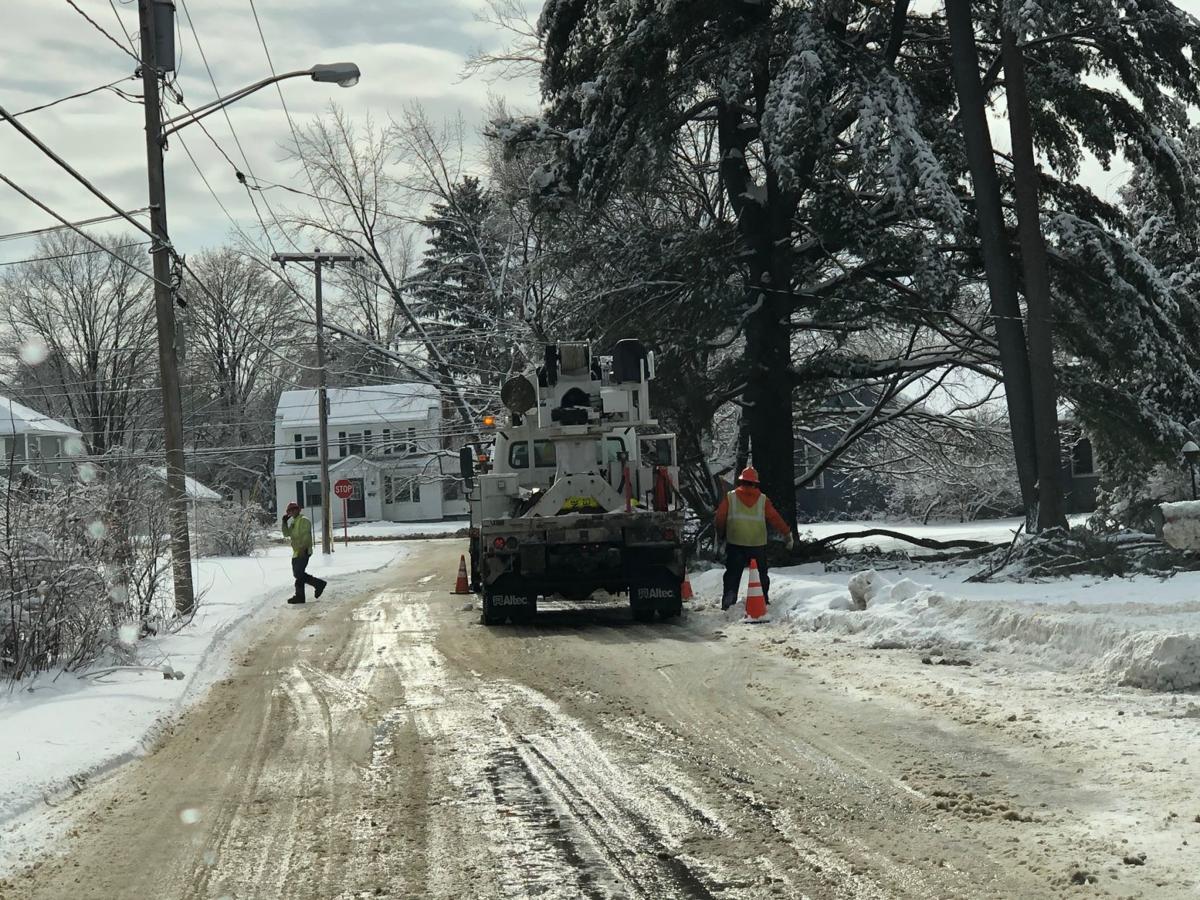 A National Grid crew works on Parkview Avenue in Queensbury on Saturday.

Tens of thousands of local residents remained without power Saturday as bitter cold set in following Friday’s storm, and a number of warming stations and emergency shelters have been set up as outages will stretch at least into late Sunday.

National Grid had 55,000 customers in Warren, Saratoga, Essex, Hamilton and Washington counties still out as of early Saturday, but the number dropped to about 25,000 as of Saturday night. Most of them were in Warren and Saratoga counties, with northern Warren County and northwestern Saratoga County hardest hit.

Up to a half inch of freezing rain followed by up to a foot of heavy, wet snow proved too much for trees that brought down wires and utility poles around the region.

The company’s website listed 11:30 p.m. as estimated restoration time for all outages in the region, though some were expected to linger into at least Monday.

National Grid line crews were around the county, one crew in Chester saying that 20 more crews were en route as of 8:30 a.m. The company reported it had 1,200 workers dealing with outages, and had restored power to 110,000 of the 145,000 customers who lost power statewide during the storm as of Saturday night.

That is troublesome in light of the extremely cold weather expected Sunday.

Overnight shelters/warming stations were being set up Saturday night at Horicon Town Hall, Lake George Elementary School and Pottersville Fire Station, with assistance from the Red Cross. The Horicon and Lake George buildings will be open until 9 p.m. Saturday, while the Pottersville fire station will remain open overnight.

A number of warming stations were also set up at area fire stations Saturday morning, but officials said they were sparsely populated during the day and most closed by Saturday afternoon. It was unclear whether they would reopen Sunday.

In addition to the shelters, Luzerne-Hadley Fire Department’s monthly fundraising breakfast that is scheduled for Sunday from 8 a.m. to 11 a.m. at the fire station will be offered at no charge so residents can get a hot meal.

LaFlure said county officials were also working with the American Red Cross to set up the Lake George Elementary School shelter. The county also has a sheltering trailer that may be available later in the day as well. The Office of Emergency Services was bringing generators to the North Creek fire station, to take them around to temporarily power homes if needed.

State Police had set up a staging area at the agency’s station on Route 9 in Chester, moving snowmobiles and four-wheelers to the station for possible use in accessing remote roads that hadn’t been plowed because of downed trees.

Saratoga County continued to have the most outages in upstate New York, with 30,000 customers down as of early Saturday, the Wilton/Greenfield/Saratoga Springs/Corinth areas accounting for more than 18,000 of them. That number had been cut in half by late afternoon.

Nearly half of Warren County remained out as well, with more than 21,000 of National Grid’s 44,000 customers down as of early Saturday. The entire town of Horicon was out, while most of Bolton, Chester, Lake Luzerne and Hague were out as well. Essex and Hamilton counties had nearly, 4,200 out.

Hundreds of trees were downed by the heavy weight of ice and snow. Numerous roads were limited to one lane, with Golf Course Road in Queensbury closed.

“Trees are down everywhere, power lines are down. There is extensive damage and our highway crews are working around the clock,” Horicon Supervisor Matt Simpson said. “We haven’t gotten an update from National Grid yet, but they are dealing with a lot of damage.”

A section of Route 8 in Horicon, east of the Schroon River bridge, remained closed as of Saturday afternoon, with numerous trees down, Simpson said.

The hamlet of Chestertown had power as of early morning, with stores and some restaurants open. Stewart’s on Route 8 in Chester was jammed all morning long.

“We are open and have the heat on,” he said. “There is a lot of lines down but we just got power back in Warrensburg. Chester is in bad shape though.”

Lake Luzerne Supervisor Gene Merlino said there were some residents of town who had been cut off by fallen trees and downed live wires, and town officials are trying to figure out a way to get to them.

Generators were set up to run the town water system while power was out, but some parts of town were getting power back during the day Saturday, he explained.

“There are a lot of headaches all over,” Merlino said. “Anywhere there are pine trees, there are problems.”

Residents of northern Warren County were dealing with it as best could be, with woodstoves and generators running. But not everyone had a backup heating source. John Mohlenhoff was working to clear a foot of snow from his White Schoolhouse Road mailbox and driveway on Saturday morning, and was trying to figure out how to stay warm with power out on his road.

“I hope we get power back soon because I’m freezing,” he said.

The sounds of chainsaws and generators were common around Queensbury Friday night and Saturday morning as nearly half of the town was without power. But several local home improvement stores, hardware and big box stores reported they were sold out of generators and most portable heaters by early Saturday.

NYSEG customers in Washington County were more fortunate, with all of their local outages repaired by Saturday afternoon.

Saturday’s high temperature was not expected to get above low 20s, with Sunday’s low well below zero. Those who don’t have power were urged to keep faucets running slightly to keep pipes from freezing.

Anyone needing emergency heat assistance was asked to call their local police department to try to make arrangements.

Power outages dwindle in Warren County with about 2,000 extending into Monday

Thousands remain without power in Warren County following Friday's storm. Many were holding out hope for restoration late Sunday, but now Monday by 3 p.m. is anticipated.

Friday's storm slowly brought disaster for many in the region. Preparing ahead of time pays off on weekends like these.

First responders and public works and utility crews who dealt with damage from the Feb. 7 ice and snow storm were praised by officials Friday.

Golf Course Road in Warrensburg was closed as of Saturday morning because of trees and wires down for more than a mile.

The sunset after Friday's storm brought a bright orange glow to much of the region.

A tree sits on utility wires on White Schoolhouse Road in Chester on Saturday morning, with a National Grid worker minding it in a vehicle.

A tree lays across county Route 8 in Chester on Saturday.

A National Grid crew works on Parkview Avenue in Queensbury on Saturday.