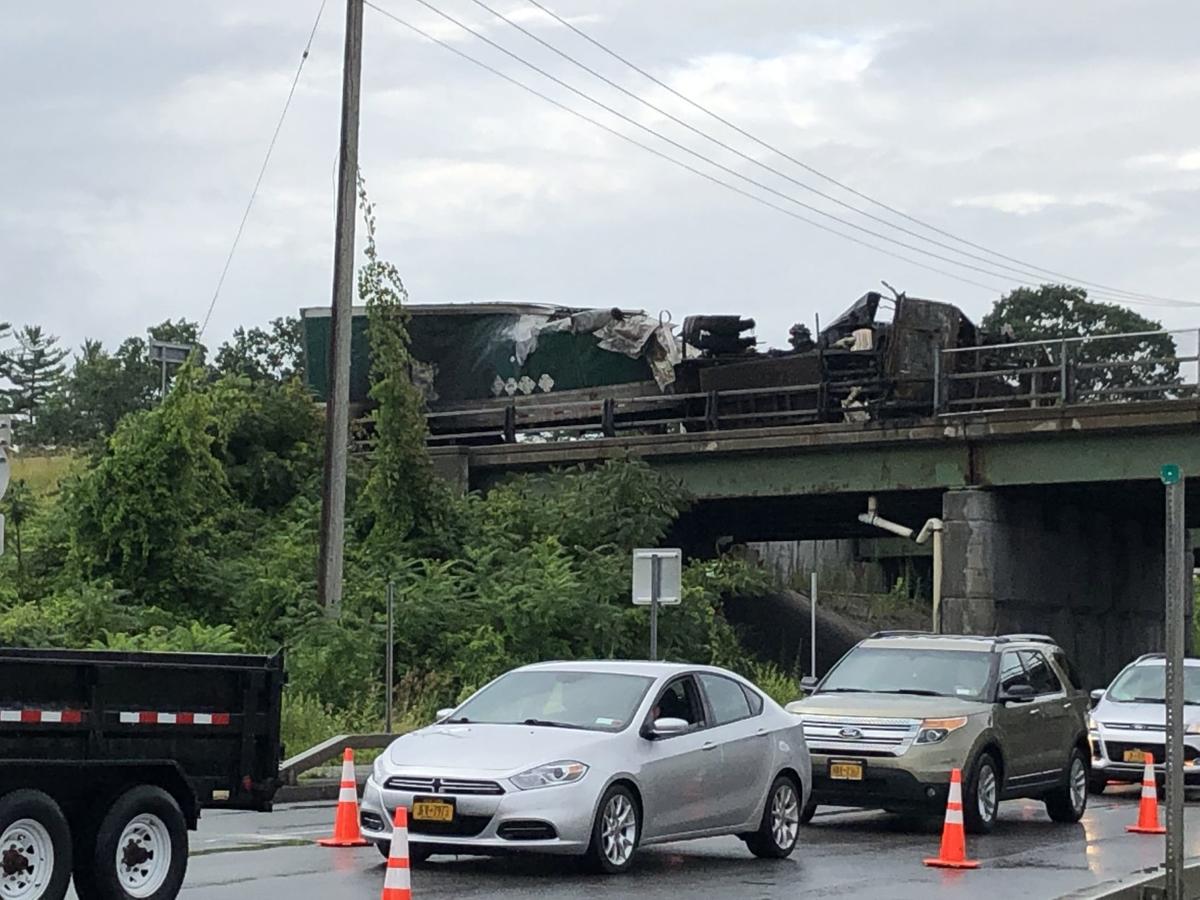 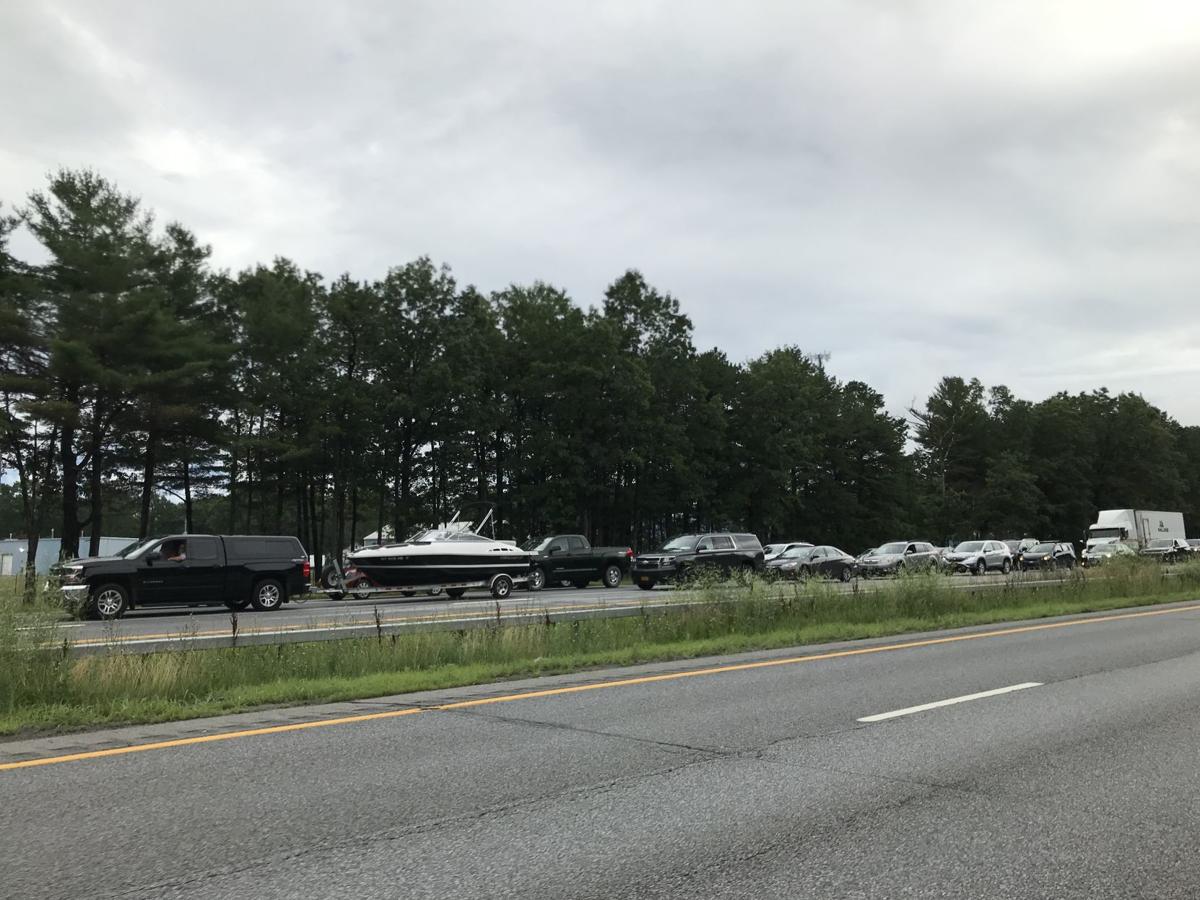 QUEENSBURY — State Police have determined the driver blamed for a fatal crash Wednesday on the Northway initially gave them a false account of what happened, and that his truck crashed into guardrails and landed in the highway’s right lane before the deadly collision, officials said.

One tractor-trailer driver died and the other was unhurt when their vehicles collided around 3:30 a.m. Wednesday in the northbound lanes near Exit 18.

State Police have not released the name of the driver who died, as they work to confirm his identity. He is not from the Glens Falls region. Police believe they know who he is, but are awaiting confirmation through comparison of dental records or DNA to make a final determination.

The driver who survived was identified as Everon J. Meadows, 50, of Springfield, Massachusetts. He was driving a truckload of produce for Hannaford.

Authorities said he initially told troopers he had stopped his truck on the shoulder of the highway to check a maintenance issue when he was hit from behind by the other tractor-trailer, which he told officials veered off the traveled lane.

But State Police found inconsistencies in his story and the physical evidence from the crash scene, and when he was re-interviewed Thursday, he told them he actually fell asleep, hit the guardrail near the exit and his truck rolled on its side, police said.

The cab of his truck landed in the traveled lane, where it was hit seconds later by the oncoming tractor-trailer, officials said. The driver of that vehicle never made it out as the cab burned.

State Police were reviewing potential charges in the case with the Warren County District Attorney’s Office as of late Thursday.

“Once we conclude the investigation and have all of the facts we will make that determination,” State Police Senior Investigator Bill Shea said.

Both trucks caught fire, and the driver who died was not able to escape his vehicle.

State Police used drone photography and computerized reconstruction as they analyzed where the vehicles collided, and found that it did not appear to match Meadows’ story.

Investigators were still looking to talk to witnesses and asked that anyone who may have witnessed the crash or immediate aftermath to call police at the Queensbury station at 518-745-1035.

The northbound lanes were closed for nearly 14 hours as the crash scene was cleared, resulting in lengthy traffic jams on the Northway and Route 9, to which traffic was diverted for parts of the day.

The closure took an extended period of time because of the police investigation, amount of damage and cleanup that required. Specialized wreckers with cranes were brought in.

In addition to an extensive cleanup that was required, DOT crews had to inspect the Exit 18 bridge for damage from the fire before it could reopen.

Bryan Viggiani, a spokesman for the state Department of Transportation, said his agency posted warnings on message boards and used social media to alert the public of the closure.

The department posted messages to 16 DOT variable message signs following the crash and highway closure. There were signs on I-787, I-90 and I-87 in Saratoga and Albany counties, as well as messages on the Thruway.

“We also utilized the 511 NY system to get messages out to the public about the crash and closure,” Viggiani said in an email. “Providing real-time information to motorists in the event of emergency situations is a top priority for DOT.”

Local and Albany-area media also repeatedly updated their news coverage throughout the day advising the public of traffic issues.

Warren County Emergency Services Director Brian LaFlure said Northway crashes are very difficult to deal with for traffic control, as there are no alternative routes that can handle the number of cars and trucks from an interstate highway. He said he didn’t see anything the Department of Transportation or State Police could have done to lessen the problems.

It’s an issue that has occurred a number of times before, but there is limited planning that can be done with the current road infrastructure.

“Once you push all of the traffic off the Northway to a road that is designed for that traffic, you’re going to have problems,” LaFlure said. “We’ve been through this before. I wish there was a better way, but in that scenario there wasn’t. DOT was there very quickly and did what they could.”

One way drivers can make closures easier on themselves is to learn alternative routes for when closures occur, LaFlure added.

One truck was carrying groceries for Hannaford, and the other had fertilizer and paper products for Pennsylvania-based trucking company New Penn. Calls to both companies’ corporate headquarters were not immediately returned Thursday.

This ‘Cotton Castle’ in Turkey could have healing powers

Ford to spend $11.4B on battery and assembly plants

Ford to spend $11.4B on battery and assembly plants

GOP senator to Milley: 'Why haven't you resigned?'

GOP senator to Milley: 'Why haven't you resigned?'