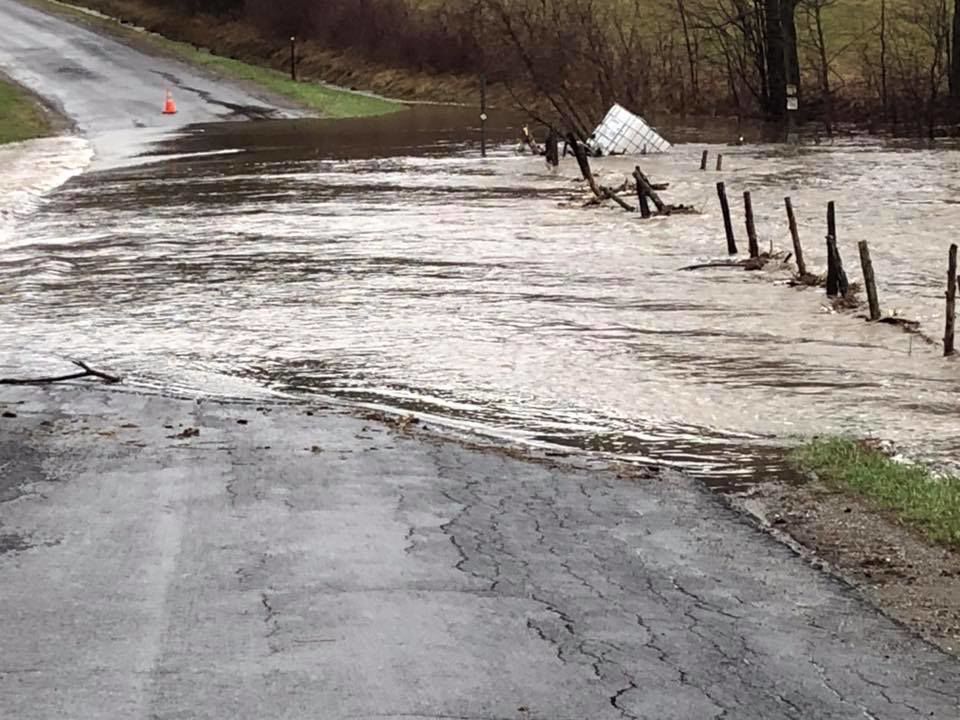 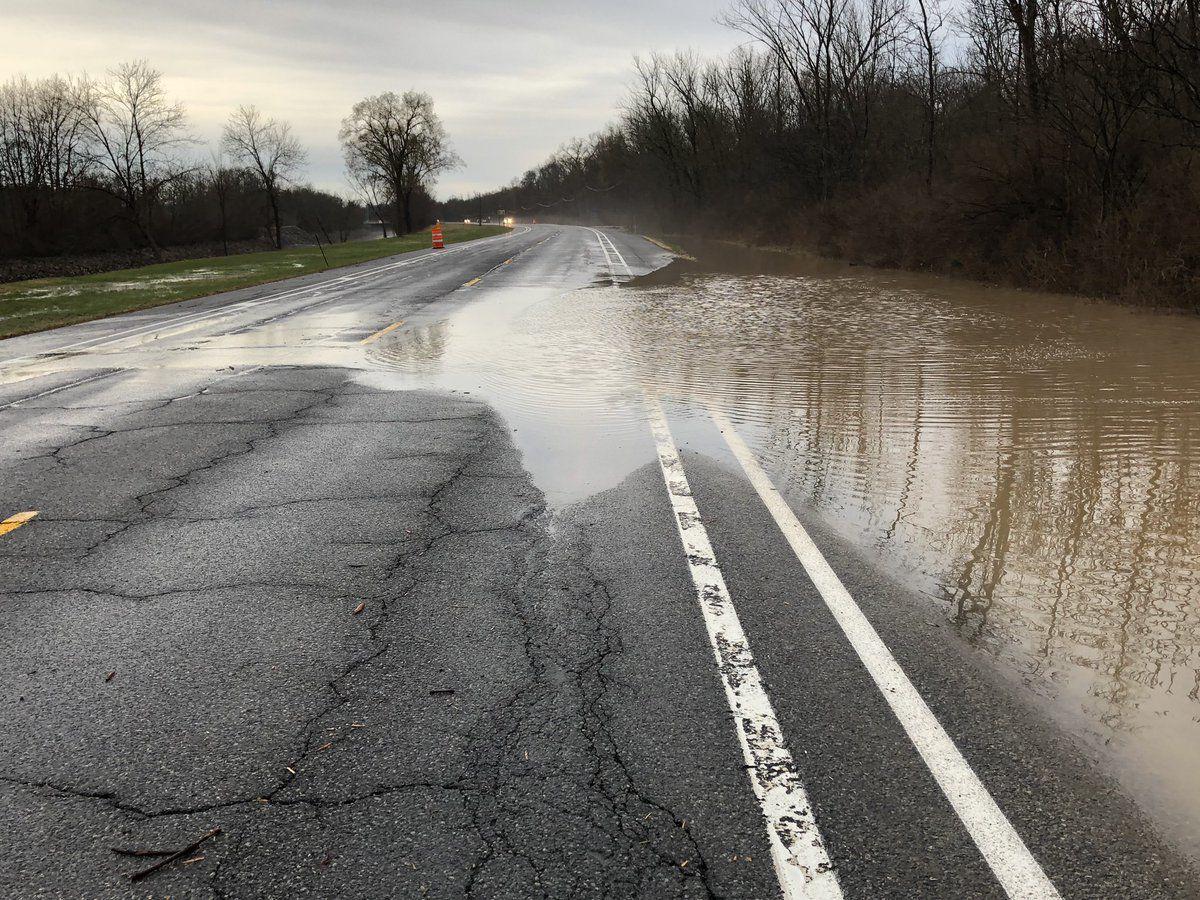 Floodwaters remain on Route 4 in Fort Edward early Monday, near where a woman was rescued from a submerged car hours earlier. 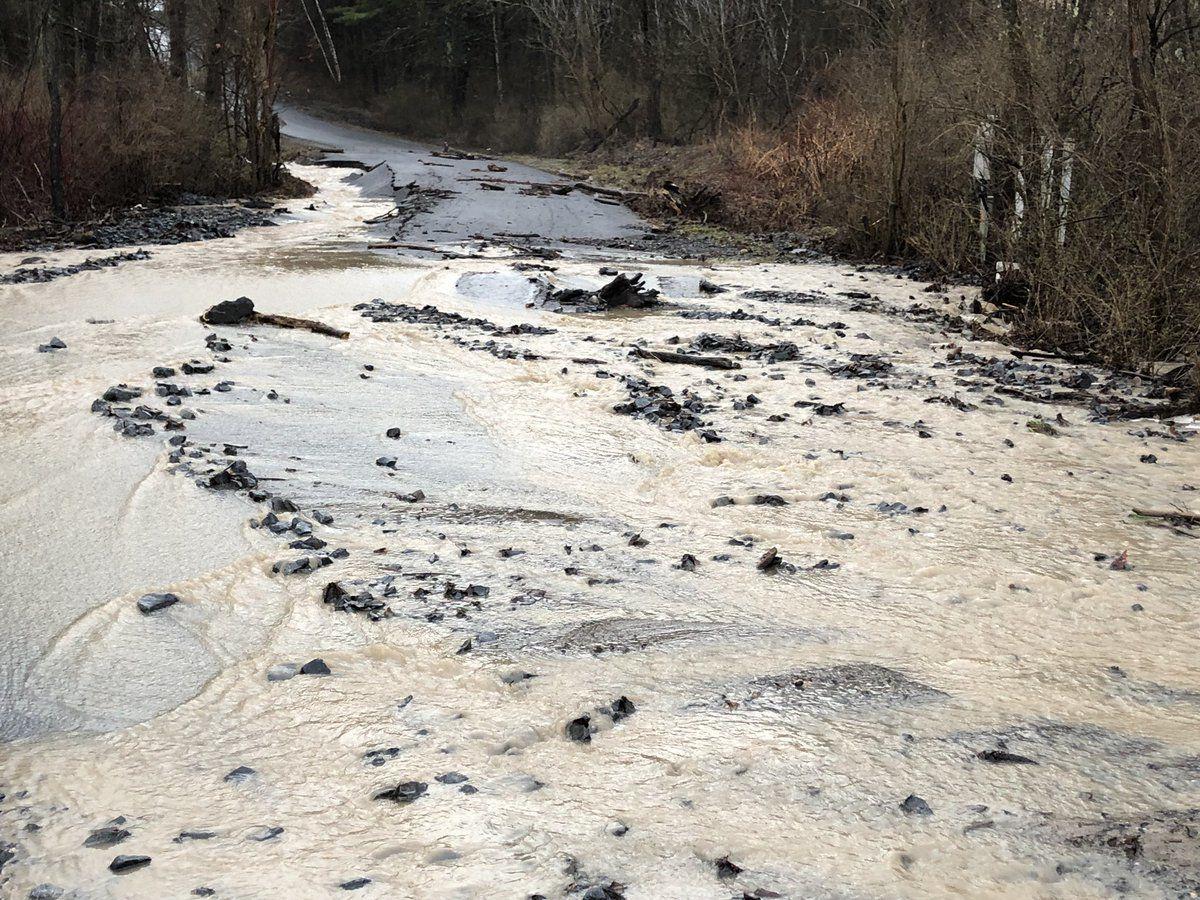 Glen Road in Fort Edward was washed out by flooding early Monday, waters from a stream flooding Route 4 and submerging a car. 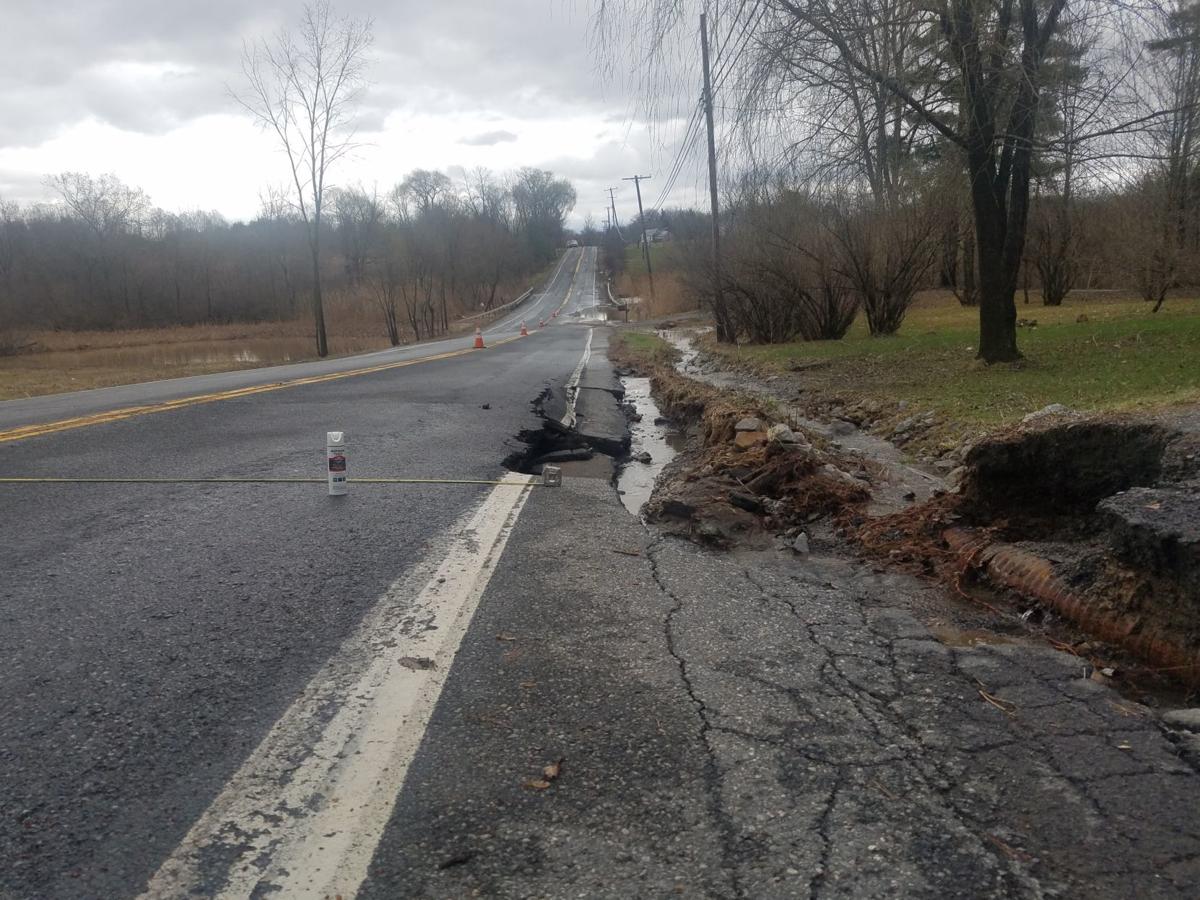 Thousands of local residents lost power and flood warnings were issued for parts of the region after heavy storms moved through early Monday, with one local fire department having to rescue a woman from her car submerged in nearly 5 feet of water.

Two schools closed and dozens of state, county and local roads were closed for periods of time after Monday’s downpours.

Route 4 was closed in Fort Edward near Duer Road and just north of the Washington and Saratoga counties line because of flooding in the Fort Miller area, and the southbound lane of Route 32 was closed north of Schuylerville as well. Route 22A in Hampton and Baldwin Corners Road in Hartford were also closed for part of Monday, and numerous roads in the Gansevoort and Granville areas flooded and were shut down.

Route 4 had re-opened as of 7:30 a.m., but one lane remained closed into the late morning. Part of Duer Road was washed out as nearly 2 inches of rain fell in parts of the region in a matter of hours late Sunday and early Monday.

Fort Edward firefighters were called out shortly before 4:45 a.m. to rescue a woman who had driven into floodwaters. Her car was submerged and had begun to float away.

“She tried to drive through it and her car just started washing away,” Hurlburt said. “Our guys got there and were able to get her out.”

The woman, whose name wasn’t available, was cold but was checked at the scene by Fort Edward Rescue Squad personnel and released to her parents, who had come to the scene, Washington County Sheriff Jeff Murphy said.

Hurlburt said the event was a reminder that drivers should not try to go through flooding on roads.

Hampton Supervisor Dave O’Brien said numerous roads around town were flooded Monday morning, and homes on county Route 20 had to be evacuated. He said it was too soon to tell if there was damage, but washouts appeared limited. At one point, access south out of town was cut off, and residents had to drive west to Whitehall to go south.

“I can’t believe how much water came down,” he said. “I haven’t seen that much water at the bridge on Route 18A (over the Poultney River) since (Tropical Storm) Irene.”

Argyle Central School did not open Monday “due to flooding on local roads and hazardous driving conditions,” according to the district’s social media. Hartford Central School also closed.

Washington County dispatchers reported other less serious flooding issues around the county, with numerous fire departments being called out to deal with flooded basements.

Flood warnings have been issued for the Mettawee River in Granville and Schroon River in Bolton, with minor flooding expected throughout Monday. The Mettawee rose over 4 feet in less than 12 hours, according to a U.S. Geological Survey monitoring station in Middle Granville. It was two feet over flood stage as of mid afternoon.

Tornado watches and warnings were issued for areas to the south of the Glens Falls region early Monday morning, as the line of storms that spawned tornadoes in the southern part of the country over the weekend headed northeast.

A flood watch remains in effect until 8 a.m. Tuesday, with more rain likely on and off Monday. Heavy winds are likely Monday afternoon and night as the storm system departs.

Concern for more flooding as heavy rain expected for weekend

Public works crews, homeowners and parishioners of a local church were still cleaning up Wednesday from heavy rains that took place earlier th…

Flood watch issued through much of weekend

A flood watch has been issued as another storm that could bring heavy rain heads to the Northeast.

QUEENSBURY — When a road floods, the guessing begins.

QUEENSBURY — In the continuing effort to reduce flooding through new methods, the town may try to redirect stormwater to a median on a residen…

Floodwaters remain on Route 4 in Fort Edward early Monday, near where a woman was rescued from a submerged car hours earlier.

Glen Road in Fort Edward was washed out by flooding early Monday, waters from a stream flooding Route 4 and submerging a car.