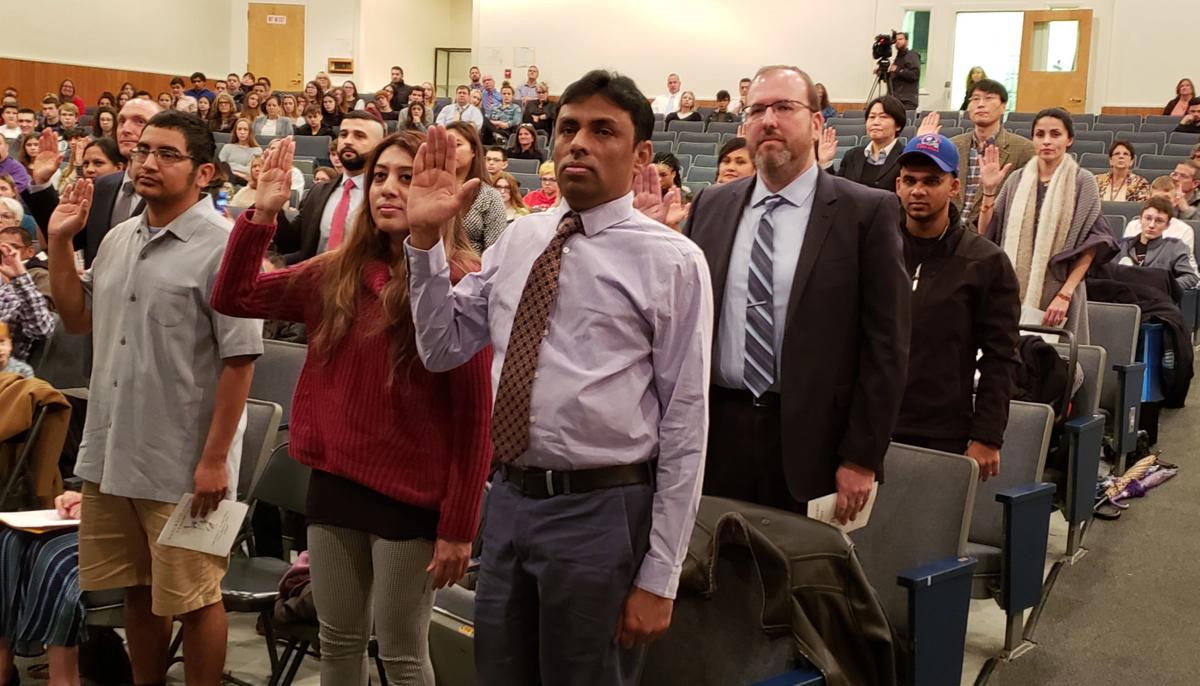 A group of 20 people take the oath of citizenship Friday in a ceremony at Lake George Junior-Senior High School. 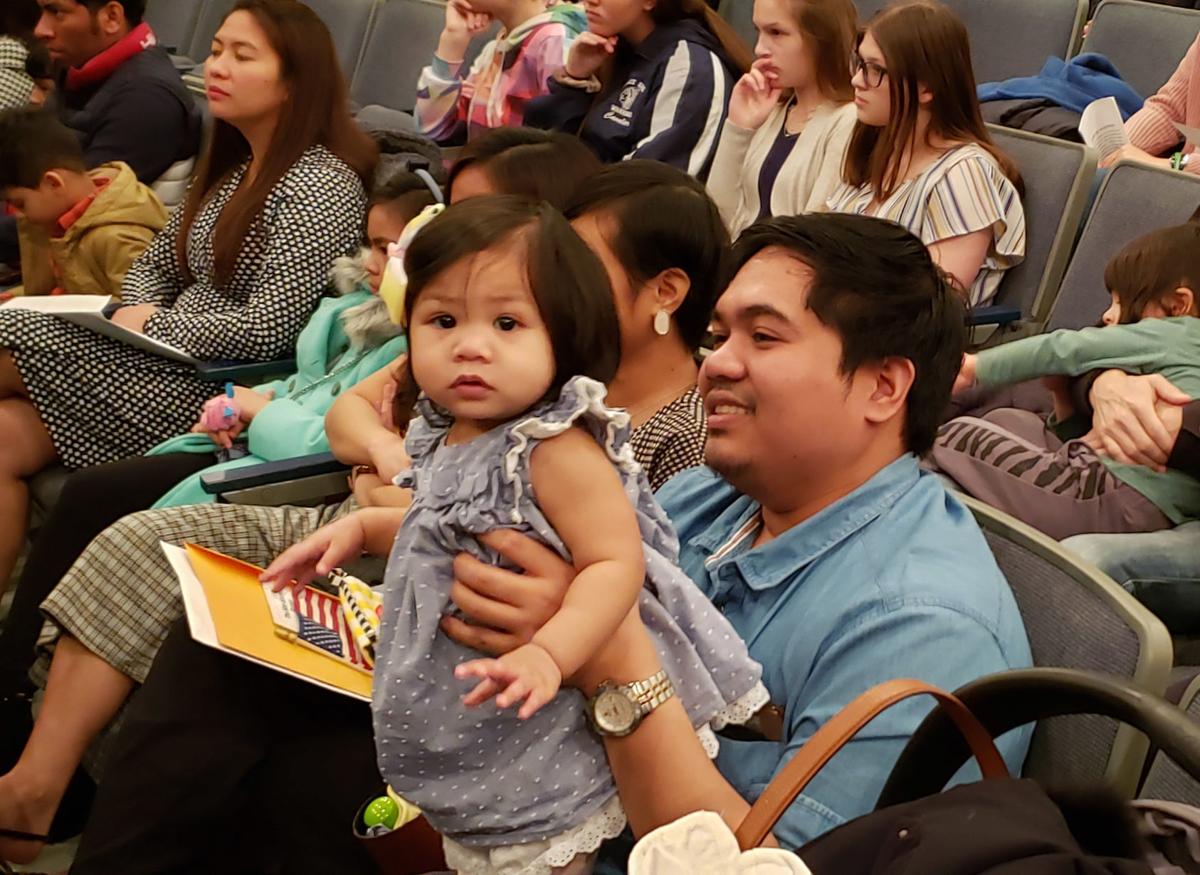 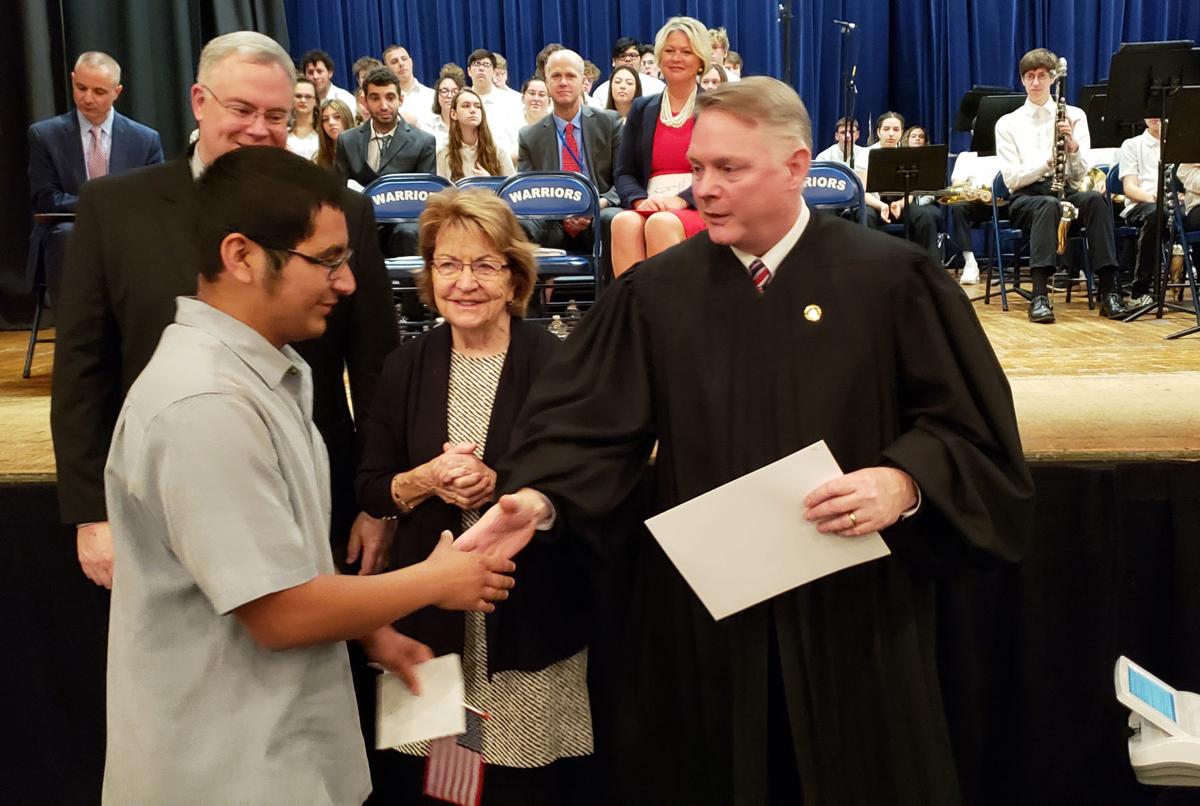 Breyster Sevilla, who is originally from Nicaragua, receives his certificate of U.S. citizenship on Friday from U.S. Magistrate Daniel Stewart. Looking on are Assemblyman Dan Stec, R-Queensbury, and state Sen. Betty Little, R-Queensbury. Twenty people were sworn in as U.S. citizens in a ceremony at Lake George Junior-Senior High School. 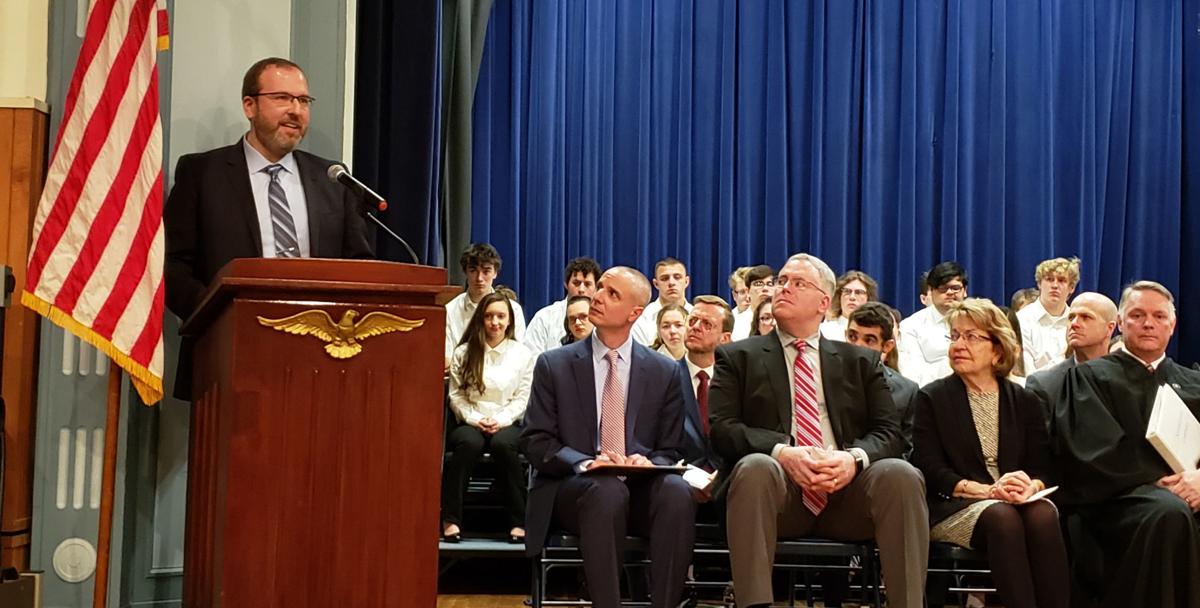 Oleg Tsyn, of Albany, who was newly sworn in as a U.S. citizen, speaks to the crowd during a naturalization ceremony Friday at Lake George Junior-Senior High School.

LAKE GEORGE — At a time of political division, a group of 20 people wanted to make their voices heard and be able to fully participate in civic discourse as American citizens.

U.S. Magistrate Judge Daniel Stewart, an alumnus of Lake George Junior-Senior High School, swore in people who were born in Iraq, Morocco, India, South Korea and other places in a ceremony Friday at the school.

Stewart said they put a lot of hard work into becoming citizens, and he is pleased to now call each of them his fellow Americans.

“We do not simply welcome immigrants. We are born of immigrants and that is really who we are as a country. It’s our oldest tradition. It’s our core value. It’s what makes us exceptional. Unless you’re a Native American, we all came here from somewhere else,” he said.

Stewart said his ancestors came from Northern Ireland by way of Quebec and they, like other immigrants, faced discrimination and hardship, but they persevered.

“They’ve rolled up their sleeves and in some sense they’ve built America,” he said.

These new citizens are not going to abandon their native culture when they come here but make it part of the “beautiful tapestry of America,” he said.

State Sen. Betty Little, R-Queensbury, told the students and family members in attendance that being a U.S. citizen is something most Americans take for granted.

New citizen Oleg Tsyn was the keynote speaker. When Tsyn was a child, his parents emigrated from Ukraine when it was part of the former Soviet Union. Many immigrants were in the same circumstances as his parents.

“We came here with no money, language — literally the clothes on your back with a dream of a better life,” he said.

His parents took on odd jobs, including work in a supermarket, and saved enough money over time to open a bakery of their own. Because of their hard work, he was able to go to college and then law school. Now, he is an administrative law judge.

All of the new citizens have enjoyed freedoms and opportunities in this country before Friday’s ceremony, Tsyn said.

“There’s one thing none of us have been able to do prior to this moment. This is truly the background of our democracy and that is the ability to vote,” he said.

A reception was held after the ceremony.

Ahmed Mohammed emigrated from Iraq in 2014. He applied for the diversity lottery on a whim and won. He considers America his home.

He has made a lot of friends and started his own business, providing non-emergency medical transportation. He expressed excitement to be a full-fledged citizen.

Laila Moran of Hudson said she came to this country from Morocco to attend college. She met her husband and stayed.

“I went to college to study TV and radio (production). Instead, I produced three beautiful kids,” she said.

Moran said she is so proud to be American.

“This country gave me so much to be thankful for — strength, independence, to work, to love and forgive and be kind to all animals, Mother Nature, people, — everything,” she said. “It just changed me completely, like day and night.”

North Creek man was careful, showed no alarming symptoms, but is now fighting coronavirus in hospital

A North Creek man, 84, is in critical condition, sedated and on a ventilator at Glens Falls Hospital.

Nursing homes that have been taking extreme measures to keep out COVID-19 are now going to have to accept new residents diagnosed with the virus.

A Corinth woman was arrested Saturday for allegedly possessing a stolen debit card and having drug paraphernalia.

Parole officers instructed to hold off on drug tests of parolees

The state Department of Corrections and Community Supervision issued instructions to parole officers Thursday to suspend gathering urine samples from the parolees they monitor.

Two more people have tested positive for COVID-19 in Warren County, bringing the total number of cases to 10; Saratoga County cases rise to 110.

Stranded without food, woman finds an angel to help

A woman in Washington County found herself without food when a day program she had been relying on for meals shut down.

'Everything will be OK': Pandemic lights bring hope in Queensbury

A Queensbury man has repurposed his Christmas lights to create messages of love and support during the pandemic.

Glens Falls Hospital has its first virus-related death; 7 new cases in Warren County, 1 new in Saratoga County, no change in Essex and Washington.

A parade that had been planned by Greenwich school teachers and staff for late this morning has been canceled.

A group of 20 people take the oath of citizenship Friday in a ceremony at Lake George Junior-Senior High School.

Breyster Sevilla, who is originally from Nicaragua, receives his certificate of U.S. citizenship on Friday from U.S. Magistrate Daniel Stewart. Looking on are Assemblyman Dan Stec, R-Queensbury, and state Sen. Betty Little, R-Queensbury. Twenty people were sworn in as U.S. citizens in a ceremony at Lake George Junior-Senior High School.

Oleg Tsyn, of Albany, who was newly sworn in as a U.S. citizen, speaks to the crowd during a naturalization ceremony Friday at Lake George Junior-Senior High School.