Become a Member
Read Today's E-edition
Share This
Turkey talk: Kids ready to gobble up Thanksgiving dinner with families
0 comments
Share this
1 of 3 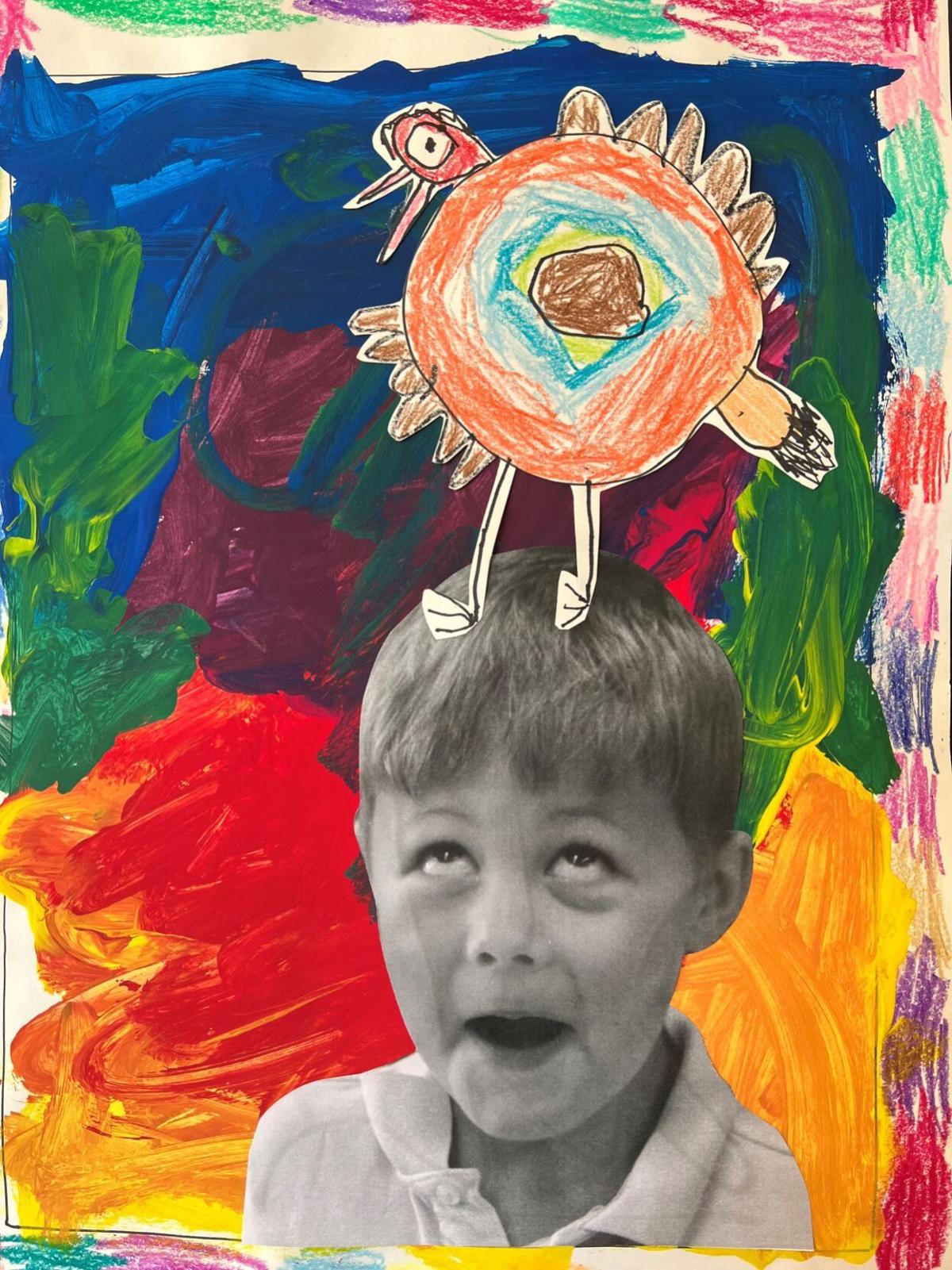 Colin White's artwork of himself with a turkey on top of his head hangs in the hallway at Queensbury Elementary School. 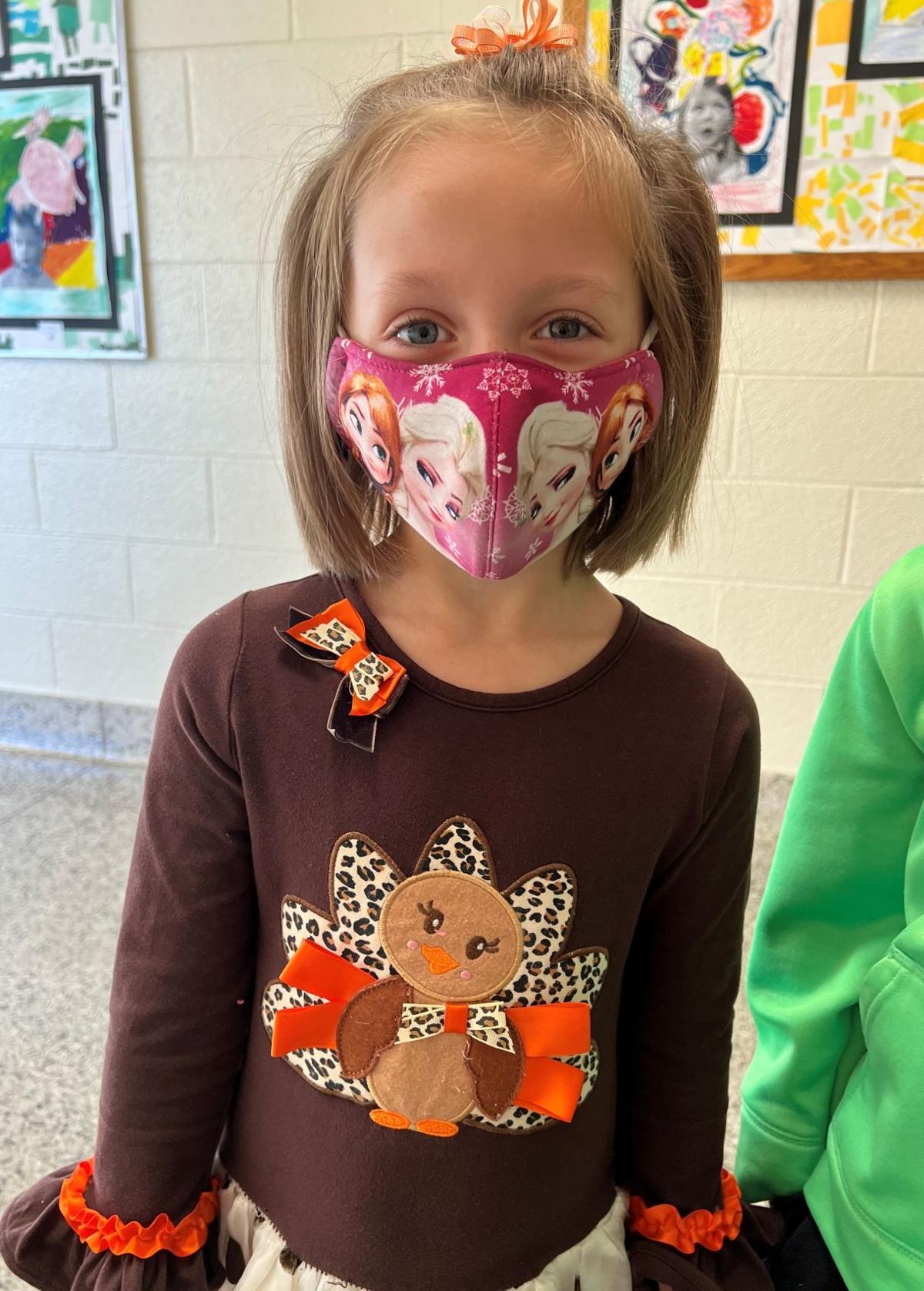 Kindergartner Delaney Olson, 5, wears a Thanksgiving dress to Queensbury Elementary School on Tuesday. Delaney is ready to eat turkey at Thanksgiving dinner this year as long as it's followed up by ice cream.

The 7-year-old had no idea how to prepare a Thanksgiving turkey or how long it takes to cook.

“I don’t know any of that,” said the Queensbury Elementary second grader.

He does like turkey, however, unlike some of his schoolmates. He really loves cranberry sauce.

“At first when I saw the cranberry sauce, I thought it was Jell-O,” he said.

His classmate Juliet Guay would prefer to skip the turkey altogether and head straight for the pie on Thanksgiving.

Juliet and her family have a tradition of making turkeys out of Oreo cookies, candy bars and Whoppers glued together with frosting.

“And then the beak is a candy corn,” said the blond 7-year-old.

First grader Andrew Sylvia, who is 6 and a half, has watched his Pa prepare a turkey in years past. Pa cooks the bird about an hour and then the family sits down to enjoy dinner.

Andrew is thankful for his family and friends — but hates turkey.

“My mom doesn’t eat it either,” he admitted.

He prefers to add stuffing to his Thanksgiving plate as well as some eggs. He finishes the meal with a nice slice of pie.

Five-year-old Delaney Olson was decked out in a brown and orange dress featuring a turkey on the front.

Charlie Wright, who just turned 6 on Nov. 4, said he got “so much more presents” than his sister Claire did on her birthday.

The two kindergartners decided together than you have to bake a turkey in the oven for at least 7 minutes.

“Then you eat it,” Delaney said.

“I like it because I’m thankful for it,” Delaney said.

Charlie would prefer to eat a plateful of mashed potatoes.

“I don’t like big things to try to eat and chew,” he said.

Neither one likes traditional Thanksgiving pies, but they are both ready for a helping of ice cream, especially the cotton candy flavor from Sprinkles.

If she did have to eat pie, Delaney said, it would be “turkey pie,” she giggled.

“Or it could be snow pie,” Charlie said. “But you would not want to eat cold pie.”

Sian MacAlpine, who is 8 and three-quarters, has no idea how to cook a turkey, but does know fractions and decimals.

“This dude is the smartest kid here,” said his friend Anthony Porcell, 9. “I don’t even know what algebra is, but he knows it.”

He may not know algebra, but Anthony has learned how to deep fry a turkey, a skill passed on from his grandfather.

But both third graders would rather eat mac ‘n’ cheese.

Alexa Thompson, 7, says Thanksgiving is all about the wishbone.

Alexa loves turkey with a side of stuffing and cranberry sauce. Then she’ll indulge in some pumpkin pie with ice cream.

But she really looks forward to the wishbone, which she didn’t get to break last Thanksgiving.

“Last year it got too yucky,” said the bespectacled first grader.

She hopes to break it this year, but she’s not saying what she might wish for.

Gretta Hochsprung can be reached at 518-742-3206 or ghochsprung@poststar.com.

Colin White's artwork of himself with a turkey on top of his head hangs in the hallway at Queensbury Elementary School.

Kindergartner Delaney Olson, 5, wears a Thanksgiving dress to Queensbury Elementary School on Tuesday. Delaney is ready to eat turkey at Thanksgiving dinner this year as long as it's followed up by ice cream.